On the 20 March 2000, the Spring or Vernal Equinox occurs when the alignment of the Earth, Moon and the Sun, produce the highest tides of the year some 7 days later at this latitude. (Equally high tides also occur just after the Autumnal Equinox in September).

What is important to the seaside naturalist is the range of tides. When the tide rises the greatest, bringing mobile fish and invertebrates further up the shore, the tide also recedes the furthest uncovering rock pools and a submarine environment that is only accessible to the terrestrial explorer a few times a year. 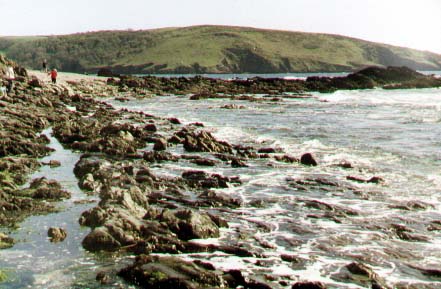 Experienced rockpoolers will know that it is the pools near the low water mark that provide the richest and most varied amount of marine wildlife. There is a good reason for this. Rocky shores can be an inhospitable habitat with great variations in temperature, salinity through rainfall and evaporation, desiccation, and deoxygenation  of considerable importance. In the vast volumes of the open sea, these factors are diluted. In the twice daily cycle of events the tide variation is just over 6 hours between low and high tide, so if the tides are getting higher every day as shown on the Tide Table, on the very highest pools it may be over 10 hours before they are renewed by the incoming tide, and if the tides are getting lower every day, the very highest pools may not be reached by the next tide, and it may be two weeks, or even six months before that particular pool, is refreshed by the sea again. In a lot of respects a tide pool is similar to an aquarium without filtration, and is only a handful of the less attractive and hardy organisms that can tolerate such extreme conditions.

In contrast, the open sea is a remarkably stable environment, with the same balance of salts found in all the oceans of the world and seas surrounding Britain. Fish and invertebrates that can be encountered in the lower pools over a long period of time include just about every fish and crab found in the shallow seas around our coasts.

Spring tides do not only occur in the spring, but every two weeks when the sun and moon are in conjunction (New Moon) or opposition (Full Moon). The name 'spring' refers to the tides springing, or leaping, up the shore, much as the plants spring into life during this season. Even this is not quite correct, as the tides are best viewed as a horizontal effect as they are pulled around the world by gravity. When the Earth and Moon are at quadrature, the range of the 'neap' tides is much smaller. The greatest range of tides occurs in narrow bays, and sea inlets, with the water funnelled into a smaller space.

Spring high tides occur at about the same time each day in every year, so if the Tide Tables show that the exceptionally low spring tide goes out around dawn and dusk in 1993 as it does in mid-Sussex, expect the low tides to occur around the same time of day in succeeding years.

Tide Tables show the calculated high tide mark in metres above the Extreme Spring Low Water Mark (ESLW) which is marked at harbour entrances on a giant measure in locations around Britain. Evidence of the high tide level is the debris on the strandline, or the limit of marine life like the barnacles and limpets on the rocks.

Most of the creatures present during January and February will also occur in March. The Lumpsucker, Cyclopterus lumpus, will have returned to deeper water. More common on rocky shores the length of Britain is another Artic fish with the apt name of Butterfish, Pholis gunnellus. Small fish should not be picked up with your fingers, because you can far too easily damage a fish this way. If you wish to have a closer look, cup your wetted hands and tease the fish into them. However, this method doesn't work very well with the Butterfish because of the slippery nature of its scaleless skin. The best method is to scoop it up in a small aquarium net.

Elongate like a snake, the brown coloured Butterfish is common throughout its range under rocks on the shore. It is distinguished by a row of from 9 to 15 false eye spots underneath the dorsal fin that runs most of the length of the body to the caudal fin. It is hardly ever to be found in the pools.

Also, under the larger rocks hides the bronze rockling, of which the 5-Bearded Rockling, Ciliata mustela, is to be found, using its five barbels to locate worms in the sand. This member of the cod family  is active by night, and is distinguished by a unique dorsal fin arrangement, of a single ray followed by a row of vibrating smaller rays set in a slit. There are several species of rockling.

The Sea Hare, Aplysia punctata, is a tectibranch and retains remnants of an internal shell which is absent in the true sea slugs. It feeds on green algae, and this brown or green at 14 cm is a large species, which is only common onshore in the breeding years.

White spirals of spawn on the underside of rocks are evidence of the presence of the Grey Sea Slug, Aeolidia papillosa, which feeds exclusively on sea anemones. Like most nudibranchs it is an annual and on the occasional spawning year scores of dead bodies could litter the shore in the run of about a week when the tides are low. 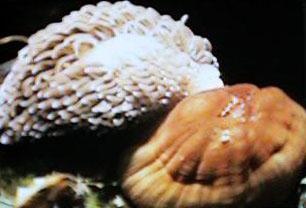 Sea anemones will close their tentacles when attacked and the Grey Sea Slug is not able to demolish every victim. Sea anemones can vary in frequency from year to year. On occasions suitable shores with rocks below the surface of shell or sand in shallow pools are carpeted with hundreds of multi-coloured anemones of the species Sagartia troglodytes. In deep limestone pools in the south-west, will be covered with the brown varieties of Daisy Anemones, Cereus pedunculatus, each specimen poking its column and span of tentacles out of narrow fissures in the rock.

Every rockpooler knows that a crab has ten legs including the claws, so when you count the legs on the small porcelain crabs and you can only find eight, there needs to be some explanation. The answer is that they are not true brachyuran crabs, but anomurans like the hermit crabs, and the fifth pair of legs is rudimentary and cannot be seen. The Hairy (Broad-clawed) Porcellana platycheles could fit comfortably on a 50 pence coin, and the Long-clawed, Pisidia longicornis, could hide under a postage stamp. They are both to be found in their hundreds under boulders and rocks to which they cling tightly. On lifting up a rock they will sidle away from exposure as quickly as possible.

All rocks should be returned in the same place and the same way up in which they are found. This is essential to preserve the fauna.