6 -10 November 2003
Forage Harvesting
The grass has been cut and bundled up into bales on the southern area of Mill Hill. These bales of mixed grasses are probably unsuitable for animal feed because of the possible Ragwort component. The long grass area immediately south of the reservoir has been left untouched. 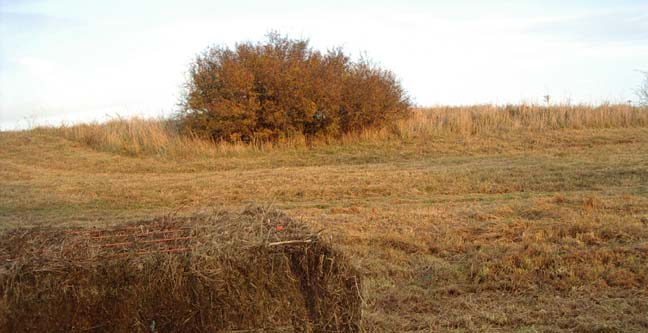 The long grasses around the upper car park have also been forage harvested. Some of the woody scrub in the far north-east corner have also been cut down allowing a view over Old Erringham Farm. The Dogwood and Wild Privet has not been tackled yet. (Should these shrubs be dealt with before they distribute their berries and seeds?) Oil Seed Rape plants are growing on the middle slopes in an eroded area where the scrub has been uprooted. 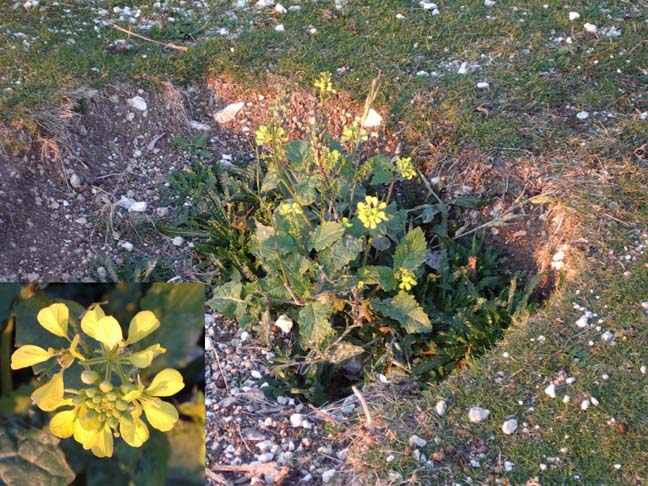 21 October 2003
On a sunny midday, there was nothing of note around except that a Wall Brown Butterfly fluttered by, landing briefly on the scrubby area of the middle slopes.

30 August 2003
On the upper slopes, the dried and parched grasses did not support the usual number of butterflies, just a handful of both Common Blues, Meadow Browns, and a few Small White Butterflies and Small Heaths. South-west of the bridge over the A27, a Wall Brown had a mid-flight contention with another one of its own species or a mistaken courtship with a Meadow Brown.
(There was a complete absence of Small Tortoiseshell and Gatekeeper Butterflies.)

20 August 2003
The second brood Adonis Blue Butterflies are now out and flying around in their brilliant blue on the lower slopes of Mill Hill. One even ventured up amongst the the brambles and long grasses (loosely dominated by the False Oat Grass, Arrhenatherum) immediately south of the reservoir on the upper slopes.  On the upper slopes, the handful of Common Blue Butterflies were a quite striking blue colour as well. There were a couple of silver chysalids of the 6-spotted Burnet Moths on the long grass stems. A couple or more of Painted Ladies produced a splash of colour in the grasses. 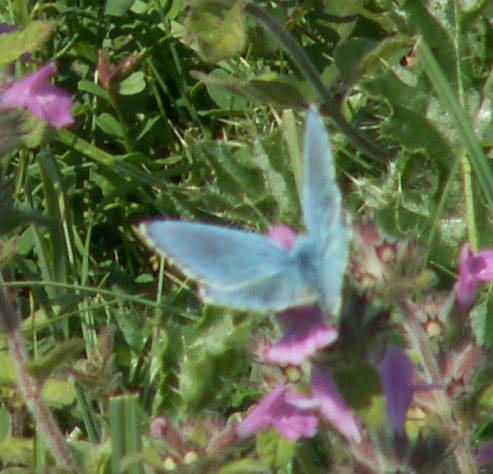 15 August 2003
All the meadows on the upper slopes had grown parched and in places there was a serious Dogwood intrusion in some of the longer grasses meadows. In the meadow to the south of the Canadian copse, I was a bit puzzled about some of the female brown butterflies of the blue family: they were either Common Blue females or Chalkhill Blue females. My favourite choice would be the Common Blue because this was long grass (over 40 cm high) and it is not Horseshoe Vetch terrain. The butterfly is shown on the right. I have identified it as Chalkhill Blue female. This incidence has occurred on a handful of occasions this year.

20 July 2003
Early Evening
I returned to Mill Hill in the early evening and I was surprised that on the lower slopes, the abundance of Chalkhill Blues was simply not on view any more. There were still plenty of Chalkhill Blues around but I only counted about thirty and most of them were hiding and only rose into flight because I disturbed them. On the approaches to the Vetch Trail from the south a handful of Wall Browns left the chalk path and half a dozen 6-spotted Burnet Moths buzzed around the Knapweeds. There were a handful of Speckled Wood Butterflies in the scrub, Meadow Browns (including some nymphalid-sized overlarge specimens) and Gatekeepers everywhere. In the long grass just to the south of the reservoir, there was one Marbled White resting, looking past its prime, and to my surprise in a small garden plot area, I spotted about sixty Chalkhill Blue Butterflies resting on the stems of the grasses in a manner reminiscent of Common Blues.