Sennen Cove
Cornwall
How interesting can a piece of timber be ?
Report and photographs ©  by David Fenwick Snr. (Aphotomarine)

I found a short railway sleeper sized piece of timber washed up after storms on low tide at Sennen Cove, Cornwall. The timber piece was completely covered in small to medium sized Goose Barnacles, Lepas anatifera. On closer examination it was found to have a cavity at one end and tucked into this was a male and a female Columbus Crab, Planes minutus. Small 3-4 mm egg masses and shipworm holes were also seen.

Having learnt from experience that shipworms are best dealt with at home rather than in the field, the timber was put in the car and examined carefully later in the day. 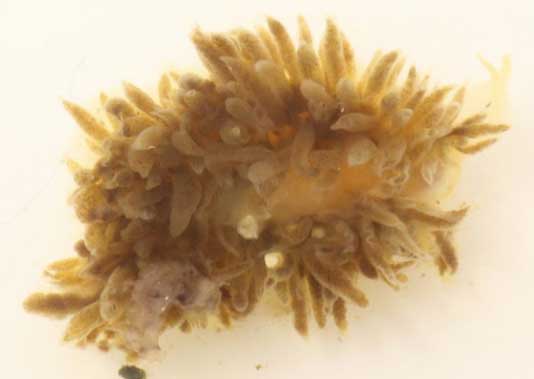 Before any exploratory work was done to find shipworms, my partner Carol carefully looked over the timber with a magnifying glass and discovered a rare 14 mm pelagic sea slug, Fiona pinnata, near the egg masses and here I must thank Bernard Picton for confirming the find and Steve Trewhella for pointing me in the right direction. The sea slug Fiona pinnata feeds on stalked Barnacles, Lepas species and By the Wind Sailor, Velella velella. 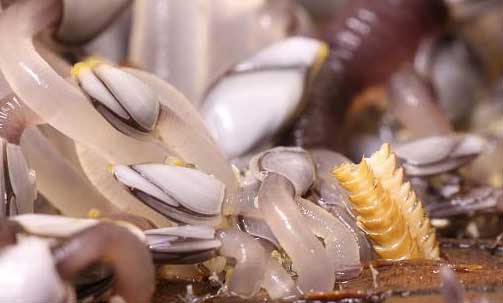 Goose Barnacles and the Shipworm Bankia

Also during the visual examination shipworm pallets were found that belonged to the genus Bankia, they look a bit like the feathers at the end of an arrow, these were immediately photographed in-situ incase of accidentally damaged. For those who don't know, shipworms are a type of bivalve mollusc, they have two pallets, also called paddles, situated at the posterior of the animal, which are opened to allow the animal to feed through its siphons and closed to allow the animal to bore deeper into the wood using its valves.

Round topped colour-coded pins were used to mark the three Bankia pallets that were found. Bankia aren't at all common and they are extremely fragile so it was important these paddles were protected during the extreme measures that are needed to be taken to assess the timber. Marking was also neccessary in case the pallets were retracted by the animal.
Various sized chisels, hammer, saw and cutting blades are needed to remove shipworms, the job is also very messy when dealing with living material in wet timber, very smelly, and not to be rushed. The work is very systematic for it's important to retrieve pallets and valves from the same animal and this isn't at all easy with shipworms as a small piece of timber can contain hundreds of shipworms of varying species, all criss-crossing each other through the wood. Juveniles and vary considerably from adults, so having matching pallets and valves, and varying ages of them helps with their identification, some being very difficult to tell apart. 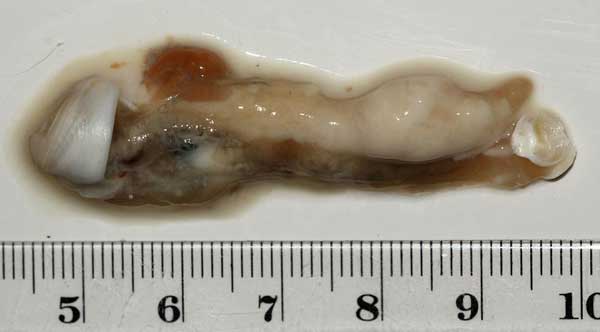 
The first species to be identified from the wood was Teredora malleolus, and this species made up about 95% of the shipworms in the timber. This species has only been recorded once in Cornwall, by Dr. Paul Gainey, in the past 100 years. The next species to be identified was Nototeredo norvagica, about 2%, and the Bankia pallets were eventually carefully removed intact and these made up to about 1% (3+) in number. The species of Bankia was determined by looking at the intact pallets through a microscope at x 40, and the species was found to be quite a rare species around our coast, Bankia gouldi; being recorded from Brazil, Mexico and Norfolk, Virginia, USA (ref. Turner).

I've got quite into these animals recently and I frequently come across shipworms, either in wood flotsam, or locally on the submarine forests of Mounts Bay, Penzance, Cornwall. I'm exceedingly grateful to Dr. Jan Light of the Conchological Society of Great Britain & Ireland for all the invaluable technical help and support she's provided in helping me further my knowledge of them. I am currently trying to build up a good photographic record of UK shipworms, which will appear on my website at
Aphotomarine. If anyone can help with this and supply me with material, or material I could help identify I'd be very grateful.
Material can be sent to David Fenwick, 84 Roscadghill Parc, Heamoor, Penzance, Cornwall. TR18 3QY. 01736 448392.