This is not 'novice' territory. The Atlantic swell can reach down to 20 metres and the seas are seldom calm. The whole of the Skellig islands in the south of Ireland is part of a volcanic basin. The basalt rocks drop steeply so that the 50-metre mark is surprisingly close to land. What you do get is clear warm oceanic waters from the Gulf Stream teeming with life.

We dived every day apart from the obligatory visit to Dingle Bay. The locals have called the Bottle-nosed Dolphin. which has made his home in the bay, 'Fungi'. We snorkelled out, and after what seemed an eternity of bashing knives together (apparently it seems to attract him), he suddenly appeared only a metre away from us in the water.
His back was scarred from propeller blades - he likes to chase after pleasure craft organised by astute fishermen who charge tourists £5 for the short trip from Dingle harbour. He stayed 15 minutes before chasing more boats out to sea before briefly returning.
Cetacean Page

At about 10 metres depth, right underneath a large cleft in some rocks, a wonderful cave extended for about 15-20 metres, but the visibility was superb, the colours of the Lobsters, Tompot Blennies and various anemones were stunning. Below the cave were several large Crayfish. There is, however, a ban on divers 'collecting' shellfish in Eire. 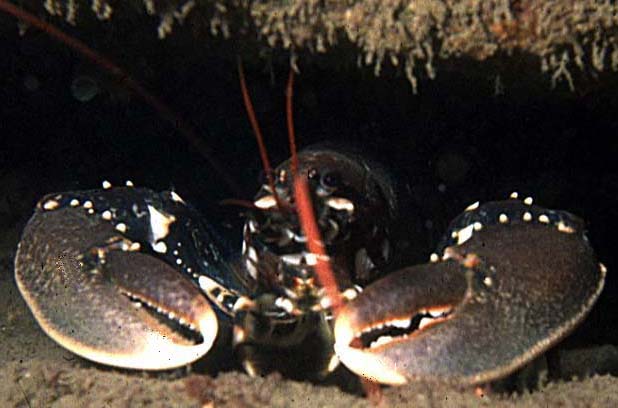 One of the two night dives took place at Carehdaniel beach at midnight, opposite the graveyard! An amazing number of big Edible Crabs, Tope, Dogfish, juvenile Conger, and Little Cuttles Sepiola atlantica danced in the torchlight. Visiblity must have been 15 metres.
At night, Hermit Crabs were common, but none with the commensal anemones.

Urchins were very few in number. We surmise that swell makes it difficult for them to retain their holds. The Kelp descends to greater depths than elsewhere in the British Isles because of the clearer water. The most prevalent echinoderm were the Sea Cucumbers in huge numbers. The trails were noticeable with 4 to every square metre we dived in.

Large shoals of Pollack and Mackerel were in evidence. The largest of the Congers reached 15 cm (6") in diameter. The dramatic Compass Jellyfish, Chrysaora hysoscella, even when small are not overlooked. One specimen was over 2 metres (6 ft) in length. 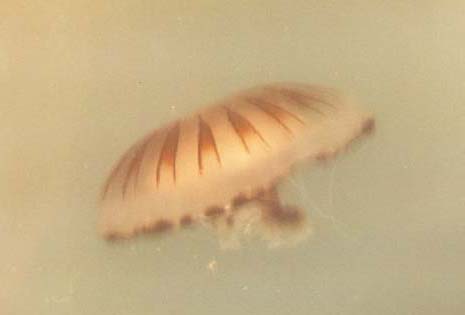 Sponges were hued mostly in orange and yellow. Of the smaller species; Shrimps and Squat Lobsters were found in abundance.

The final dive also happened to be the most memorable. As the weather calmed towards the end of the week, we paid a visit to the Skerrigs, about 16 miles (26 km) out at sea.  On route we passed a large seal being stalked by a Blue Shark. When we thought no-one else was looking, we took it in turns to check our knives were packed on board!


We dived on the west face of Little Skellig, easily distinguished by its white colour caused by the guano of 40,000 pairs of gannets that nest there. At 25 metres, the visibility was 30 metres plus which showed off the dramatic underwater scenery. Anemones in a variety of colours, red, green, yellow, purple-pink, covered wall-to-wall of sheer cliff faces. 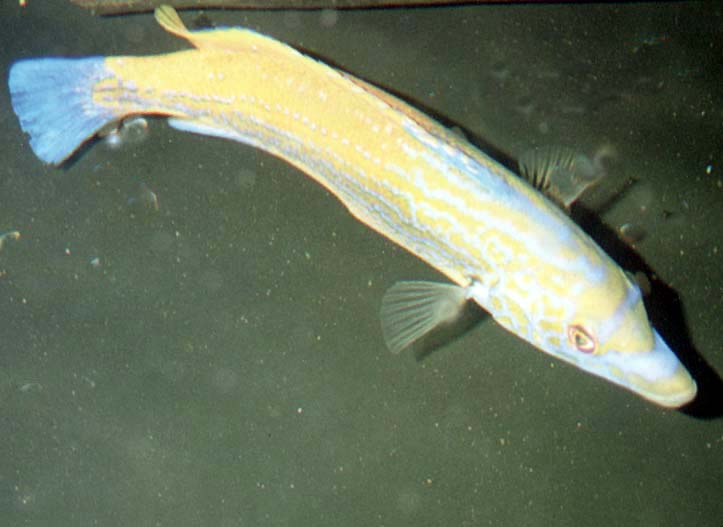 The largest and friendliest Cuckoo Wrasse that I had ever seen followed us for much of the dive. The Cuckoo Wrasse, Labrus bimaculatus, (=L.mixtus), is the most colourful British fish, rivalling the tropical reef species. The male in 'blue' mating colours is particularly striking. We saw 20, not in a shoal, but spread out during the duration of the dive. The females are reddish, with a less dramatic appearance.

The highlight for two of the divers came when climbing one gully, there was a seal facing them two metres away which would mimic the divers movements. All the dive pairs had inquisitive seals with them at some point.