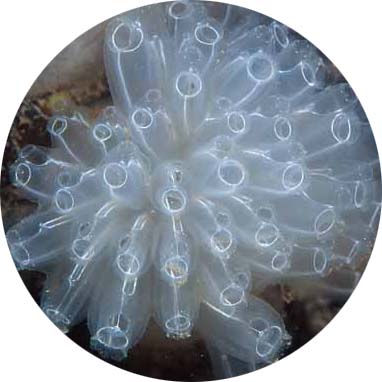 Life under the waves can get pretty crowded when you are a sea squirt vying for space on the rocks. But these sea creatures have a novel weapon--they use their sperm to sabotage the eggs of other kinds of sea squirt. According to a marine biologist in California, this may be the first example of sperm competition between species.(Extract from the New Scientist)


1 December 2011
The invasive alien Carpet Sea Squirt, Didemnum vexillum, has new been discovered on the shore in Kent. This  colonial ascidian is an invasive and unattractive smothering species from the Pacific Ocean off Japan. It has occasionally been recorded in harbours but this is the first time it has spread to adjoining areas around England.

Ian Wrigley discovered this peculiar object on the sandbank of Whitesands in Old Town Bay at low tide, at St. Mary's, Isles of Scilly. This large jelly-like mass was solid and heavy. The green translucent organism was quite slimy, and at 30 cm across it was estimated to weight over 1 kg. Most distinctive feature of this mystery object was the presence of many small whitish nodules within (5 to 10 mm), visible through the jelly, seemingly hard but in actual fact soft and they  would disintegrate with little pressure from the fingers. A few darker feathery patches were visible inside.

At this time of year, the Football Sea Squirt (yes, it can be the size of a football) Diazona violacea has lost its zooids and is an off-white, slightly translucent smooth blob with structures (the new zooids) visible through the test.
Suggestion by Keith Hiscock
on the Marine Wildlife of the NE Atlantic Ocean (Yahoo Group)

27 September 2009
On a dive out of John o' Groats (the most northerly settlement of mainland Scotland) I discovered the rarely reported free swimming tunicate Thetys vagina as well as the Mauve Stinger Jellyfish, Pelagia noctiluca,  both seen in shallow (10 metres deep) water, within two or three metres of the surface. Thetys was observed swimming by opening and closing its mouth and propelling itself along under the cliffs at Skirza Head (eastern coast). 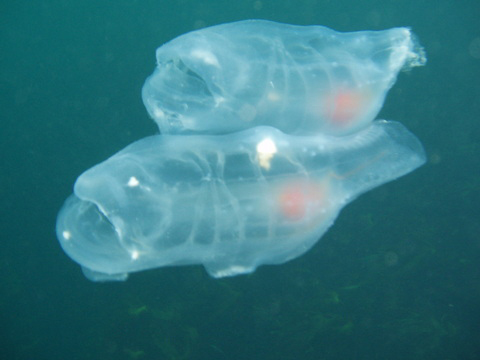 Thetys vagina has been rarely recorded in Irish waters. The species was reported for the first time in Irish waters during November 1988 when hundreds of specimens were taken in trawls at offshore. A few specimens were also found stranded on Ventry Beach, near Dingle, County Kerry during July 1987 & 1988.

Report by Chris Rickard
and Comments (with references) by Declan Quigley
on the Marine Wildlife of the NE Atlantic Ocean (Yahoo Group)
30 August 2005
Three visiting marine biologists found the invasive ascidian Corella eumyota in St. Peter Port Harbour, Guernsey, Channel Islands. This southern hemisphere sea-squirt was first discovered in Europe in Brittany in 2002.  It has now been found in marinas along the south coast of England and also along the Channel coast of France.


Whilst accompanying the biologists in St. Peter Port Harbour, I found many Goniodoris castanea sea slugs with their spawn. They were feeding on the colonial Star Ascidian, Botryllus schlosseri,  and were cryptic.  On one 5 x 5 cm
square colony of Botryllus schlosseri I found six of these nudibranchs. Dr. Charles David, President of La Société Guernesiaise, tells me this species is a new record for Guernsey.