THE TOMPOT BLENNY
IN THE AQUARIUM
by Ron Barrett

The  Tompot  Blenny,   Parablenniusgattorugine or Gattorugine is a small fish (rarely more than 15 cm in  length) inhabiting the inshore waters of northwest Europe.  It ranges from the British Isles south to the Mediterranean and possibly a little beyond.

On the lower shore its appearance is sporadic, usually as only one or two isolated specimens.  It is likely to be more common in the shallow sublittoral, although again as isolated specimens. It feeds mainly on hydroids, small gastropods, amphipods, decapod crustaceans, brittle stars and, most unusually, sea anemones. This latter habit can often turns the fish into an aquarist's   nightmare.

Let us examine  the  reasons why Parablennius gattorugine makes such a difficult aquarium subject. Firstly, the Tompot's alternative name Gattorugine.  This actually translates from the Italian (Latin) as "Rusty Cat (or Dog?).  Examine your pet Tompot head-on and you will see why!  The  "rusty" description refers to the brown "rust" patch marking on the fish's body. 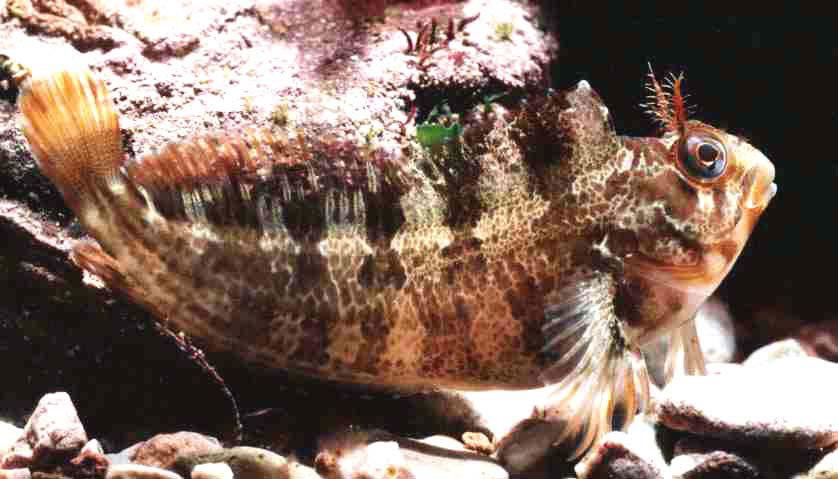 Now the point to make is that your 'rusty cat's' jaws can pose as a row of close-packed minute teeth purpose-built  for barnacle crunching, crab chopping and sea anemone slicing.  It is these teeth, plus the heavy muscular body of the Tompot, that enable it to wreak such havoc in an aquarium.  And it can also develop a liking for aquarist's fingers!

In a mixed Tompot/invertebrate aquarium, one finds that, invariably, the sea anemones are the first victims.  Of these, my studies have shown that Sagartia troglodytes is a firm favourite.  Dahlia Anemones, Urticina spp., come a close second once the protective gravel covering has been torn off. Then any small sea anemones that are left.  Only one species regularly escapes the Tompot's jaws, Calliactis parasitica.  It is just too tough!

At one time I held the opinion that a Tompot would not attack a Snakelocks Anemone, Anemonia viridis.  Wrong!  The Tompot is a canny hunter.  Mine waited until the Snakelockshad reproduced (split in half), chose its moment and then              launched itself at the area where  the  anemone  was  most vulnerable, the split point.

The strange thing was that one got the impression from the fish's reactions that it could well have been eating hot coals. Nonetheless,  the Snakelocks was duly devoured.

An attack on an anemone is fascinating to  watch.   The Tompot edges close to its target, using its large pectoral fins.  Cocks its head to one side, as if taking aim, checks to make sure there is no aquarist close by with an aquarium net, and launches itself violently at the  unfortunate victim.  Then a twist and a  tear and the poor anemone is on its way to oblivion.

Large anemones are consumed over a  period of days, the Tompot nearly always working on one victim at a time.  It is by  no means clear whether your average sea anemone constitutes much in the way of  nutritional value.  However, I have been             informed that the French used to prepare a dish of fried Snakelocks Anemones.  I'd  much prefer fresh stinging nettles any day!

As the days lengthen and the warmer  weather arrives, the lady  Tompot's  thoughts turn to breeding.  Usually, in April and May eggs are laid, either under stones or in crevices where they are fertilized and guarded zealously by the male fish.  The fortunate aquarist may have the pleasure of witnessing the event in his/her aquarium.

Unfortunately, it is at about this time  that the great "I'm taking all my bloody Tompots back" game begins. Yes, mention the word breeding to your 'Rusty Cat' and what does it do, why, it  becomes five times more aggressive and, even worse, extremely territorial.  Now we  have hermit crabs with no eyes, pipefish with no dorsal fins (and occasionally an inch [25 mm] or so shorter than when they were caught), and the remains of prawns and shrimps who strayed too close to the 'beast's lair' floating in and polluting  the water.  On top of all this, every other fish that your Tompot  cannot  catch/eat is being chased around the aquarium until it is exhausted.  Where then does all this leave the beleaguered aquarists? Probably in need of  a handy list of tips.

2) Keep Tompots separate from  invertebrates.
Only the largest crabs will survive.

They will still be vulnerable when  moulting.

3)  Keep the Tompots well fed.
Boiled mussel is a staple.
Increase the food as the temperature
rises.

5)  Include barnacle covered rocks in the aquarium to keep the Tompots
occupied.

COMMENTS FROM READERS ARE WELCOME.
USEFUL EXPERIENCES WILL BE PUBLISHED.

Tompots introduced into a tank full of  Blennies, Lipophrys  pholis,  found  themselves unable to compete for food in  the long term. The ordinary Blennies were quicker on the uptake for boiled mussel, and crabs. If fed on live prawns, Tompots are more adept.

The sea anemone Calliactis parasitica, (pic) a commensal with hermit crabs, does not survive in the long term with Tompot  Blennies. The fish worry the anemone so  much that it is unable to open  its  tentacles to feed.

The Tompot Blenny could possibly be confused with the rarer Montagu's Blenny, Coryphoblennius galerita.


Articles and snippets of information are always welcome for publication in Glaucus.
They should be sent in to Glaucus House.    A 'Guide to Submissions' is available, which will be of help to contributors with computers.

Every  marine creature is of interest and this includes marine mammals, sea birds, shore birds, vegetation above the high tide level but still influenced by the sea, strandline animals, estuarine fish and  invertebrates, as well as fully marine fauna like Basking Sharks. All sightings of this massive plankton feeder are certainly worth sending in.

Shorewatch Project    EMail Glaucus@hotmail.com.
All messages will receive a reply.