17 August 2009
I was shocked by the unmistakable sighting of a Brown Hairstreak Butterfly on Mill Hill south of the upper car park. It flew of rapidly and was lost to my sight in about 20 seconds, so this was my first ever glimpse of hedgerow butterfly that lays its eggs on Blackthorn (Sloe). This has increased the total species seen in Shoreham and all on Mill Hill to 33. 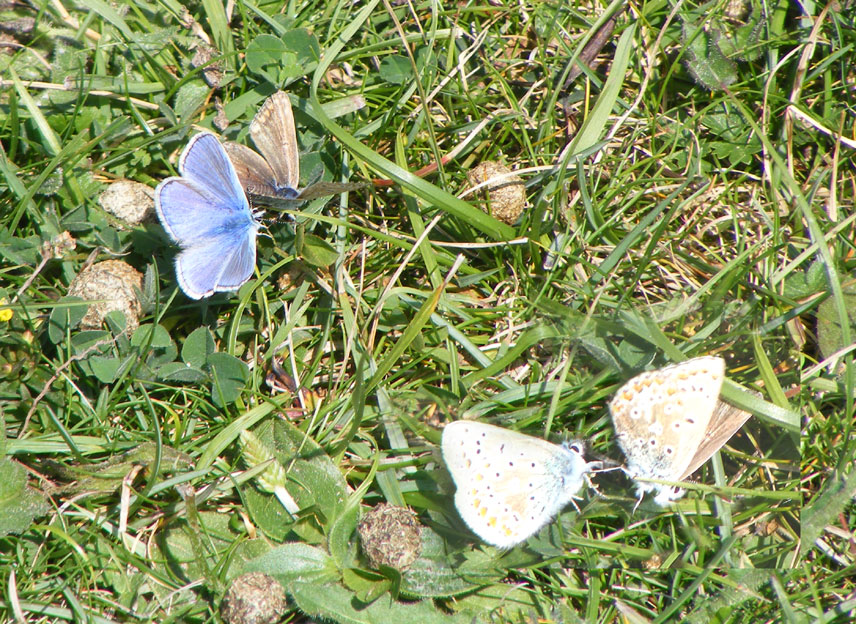 Mill Hill Scrub
10 Meadow Browns, two Gatekeepers, one Painted Lady, one Wall Brown, four Speckled Woods and one Adonis Blue.
Middle Slopes
14 Common Blues, 8 Meadow Browns, one Gatekeeper, one Painted Lady, and at least one micro-moth Pyrausta nigrata
Upper Meadows
Very frequent estimated 50+ Common Blues, frequent Painted Ladies, one Wall Brown, 7+ Meadow Browns,at least one Large White, occasionalSilver Y Moths, one Common Carpet Moth, one Brimstone Moth and one Treble-bar Moth.
Plateau and Shorter Herb Meadows
Red Admiral, Painted Ladies, one Brown Hairstreak, frequent Common Blues, two Small Heath Butterflies, two Large Whites, two male Adonis Blues and a female of either Adonis or Chalkhill Blue, four Gatekeepers, one Small White, one Wall Brown and it was on the edge of the plateau area that I was able to positively identify a Brown Argus although they were probably frequent over the upper part of the hill.
South of the Reservoir
One male male Adonis Blue, two Common Blues although there were undoubtably many more, at least two Painted Ladies and a Meadow Brown. This are was just covered in passage and I could have disturbed many more butterflies amongst the tall herbs.

Approaches to Mill Hill
Buckingham Cutting south
It was still overcast as I passed through this small area just noting the presence of a few Common Blues, Painted Ladies and three Treble-bar Moths.
Mill Hill Cutting (SW)
At least four male Chalkhill Blues and a Speckled Wood fluttered around.
Pixie Path
A courting pair of Gatekeepers rose above my head with five Holly Blues, a Wall Brown, two Large Whites, a Meadow Brown, two Common Blues, and a Small Tortoiseshell. In the Butterfly Copse there were two Speckled Woods and a Large White.Over the Waterworks Road there were three Large Whites, aSpeckled Wood and the first of the positive sightings of a Green-veined White.

The latter two were interesting because they were not seen on Mill Hill and brought the total of species seen up to an impressive nineteen.