Pipistrelles seem to be quite happy on solid surfaces, whether horizontal or vertical, and can take off easily.  Other bats prefer to land on things above ground - either to give themselves more room to flap their wings, or just to gain air speed.  For example, we recently were given a Long-eared Bat rescued from a cat.  We put the bat on the house wall at less then 2 metres.  The bat looked around, echo-locating, then climbed another half metre up the wall before taking off.
Greater Horseshoe Bats hunt close to the ground, and as they feed on large beetles that are slow to fly (as well as on moths and other things) they are capable of landing, picking up the beetle, then flying off to a perch and eat it there (they can hang from a perch as easily as other things 'perch' on a perch)

Also, many bats effectively land on the ground (or a rock or log) in or on water when they need to drink. 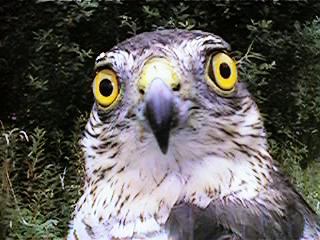 With regard to Sparrowhawk. I was just returning to my car recently when I noticed a Sparrowhawk coming straight at me, it skimmed my head and then took a huge swoop upwards and picked a Starling off from the top of a tree in the churchyard behind me, the whole thing taking about 3 seconds. It disappeared with the Starling grasped in its talons. The Starling was not moving or struggling so I assume it was an instant kill. Around our area (Southend in Essex) the Sparrowhawk is now much more common than Kestrel.

A few weeks ago we observed a Goshawk kill a Blackbird on our marsh area.

Our observed Honey Buzzard count in the area netted 58.

The UK Birding Group contains more messages about Sparrowhawks. the Search method can be used to find the message by typing in "Sparrowhawk".

22 January 2002
Gliding less than a metre above the road surface, south of Cuckoo's Corner (TQ 201 064), a male Sparrowhawk flew at least 20 metres along the road before veering suddenly in the hedgerow on the right. It was identified as a male by its slate-bluish colour, and as a Sparrowhawk by its behaviour including the fanning of its tail as it swerved adeptly between the bare hedgerow branches in a way that would not be common for the Kestrel. A Kestrel, a regular sight on waste land, had spent some time gliding and hovering near Old Shoreham on the east side of the Adur, so I was able to contrast the two falcons.                  Andy Horton

This is an occurrence that is not unfamiliar to me.  I work in fruit orchards during the winter when there is a lot of fruit laying about on the ground.  Thrushes etc. come to feed on this drop-fruit and the Sparrowhawks know this. Due to the density of the trees it is often the case that you actually hear them cutting through the air before you see them pass, sometimes within inches, a foot or so above the ground in search of prey.Their ability to 'fizz' through the tangle of branches without coming to grief is simply astounding.

The local kestrel population is quite stable and shows little or no seasonal fluctuation. In summer they outnumber Sprawks by about 3 or 4:1 (judged by sightings), but in winter Sprawks predominate by about 2:1.

> Does Sprawk take Kes as a prey species?
>

Similarly, Sparrowhawks sometimes kill other Sparrowhawks which can turn up at their nests as prey.  These include adults.  I used to assume that this was hens killing the much smaller males.  But it's now clear that at least sometimes males deliver other males and I have flushed a female from plucking a dead female.

Cases of preying on Kestrels and on other Sparrowhawks may result from fights than turned out fatally.  Why waste food?  After all,
Sparrowhawks often 're-cycle' their own dead chicks.

Ocean Sunfish
A large Sunfish was observed by myself and numerous excited holidaymakers in the channel outside Polperro (Cornwall) harbour on August 2nd this year. Diameter approx 1.5m, swimming lazily on its side just below the surface, I watched it for some 45 minutes before it (presumably) left. The skin appeared to be badly scarred and pitted overall, but the fish was not showing signs of obvious distress.
Jon Makeham

A Sunfish was observed by myself, Frederick Biddulph, John Mortimer, and Gerald Allen, while fishing west of Innishbofin, Connemara, Co Galway Ireland, on 29 Aug 2000.  The fish was on its side and  it seemed to be splashing it's dorsal fin. It dived as the boat approched.
Peter Biddulph 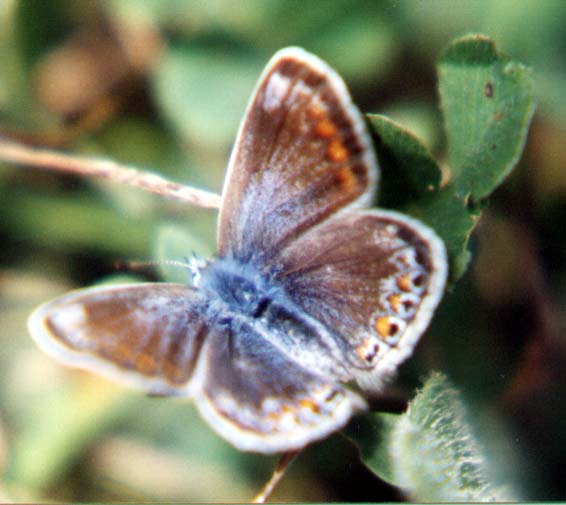 Editors note:
This is the original query from Mike Hinson, the reply from one of our
experts follows:

Hi,
I live in the UK in the northern part of Hampshire and have found that my
dry oak firewood store is alive with larvae eating the wood just under the
bark. The larvae I have seen are up to about 1cm and I have found exit holes
that are up to 6mm at the widest point. The exit holes are NOT round.

The larvae are superficially similar the picture at :

of Longhorn beetle larvae. They are light cream and have black mouthparts.
The frass is of a fine texture.

My questions are:
1). What are they?
2). Should I be concerned about the infestation spreading to my house?

Many thanks in advance, I appreciate the effort involved in helping out
people such as myself who have no specialist knowledge in this field.

First, I think that Mr. Hinson can be re-assured that the larvae in question
will not cause any trouble in his house timbers.  There are only a few
beetle species that colonise house timber in this country and none of these
develop under the bark of oak logs.

If there are boreholes deep in the wood of the logs, and if the logs are
very dry. there might be a  possibility of infestation by beetles that could
enter the house.  (If so,  very small boreholes in the wood could indicate
include furniture beetle, powder post beetles or (if larger) death watch
beetle.

The exit holes that Mr. Hinson describes could be those of a jewel beetle
(family Buprestidae), as he describes them as not being round.   The members
of this family produce D-shaped exit holes, whereas the exit holes of all
other families are either oval or round in cross-section.  If they are oval,
the beetles could be long-horns as he suggests.   If they are of the
D-shaped buprestid type, the species is almost certainly Agrilus pannonicus.
This was a Red Date book species but has become fairly common over the last
few years.  Even so, it would be a great shame to incinerate them all by
using all the logs as firewood.   As stated in the AES handbook "Habitat
Conservation for Insects", the way to minimise harm to the deadwood fauna
and flora when using firewood is as follows:

1.    Never use wood that has been left dead in or near woodland during the
spring and summer; and that has therefore probably been colonised by
wildlife;  instead use wood that has been freshly cut from the living
condition.  This is very important if in the case of ancient woodland or
wood pasture, where endangered species are more likely to be present.

2.    Store firewood in a closed polythene tent, this will help to prevent
the logs becoming colonised and thus becoming a decoy.  If the polythene is
supported on a framework and kept away from the logs in a sunny position,
the logs will dry out rapidly and soon become good firewood.

25 December 2002
The Sparrowhawk returned to my Eastbrook Road, south Portslade, East Sussex, garden on Christmas morning. The large rose in the right hand corner at the back of the garden are a meeting point for sparrows entering ours and two other adjacent gardens. The sparrows rushed to the centre of the bushes and the Sparrowhawk swooped down and landed on the bird table. It then flew around the rose bush and forced its way through the branches taking a sparrow with it. As we have now been feeding the birds at this point, more birds were present than the last time.

The Sparrowhawk hooded its prey on the ground behind the buddleia and after a few minutes it started to pluck the sparrow. About half an hour later, when we were ready to leave I checked the hawk and it was still busy eating. I was just about to leave when I saw a large cat drop from the wall onto the Sparrowhawk, unfortunately most of the scene was hidden behind the buddleia but flapping of wings and flashes of white fur were visible. After what was probably only a few seconds the hawk broke free and managed to clear the garden wall, the cat sniffed around where the hawk was and did not find the sparrow so the hawk must have managed to take it with it.
Full Report
Adur Valley (Autumn 2002) News
Report by Steve Savage
via the Adur Biodiversity Network