In May 1998 literally hundreds of Basking Sharks were seen off the Lizard Peninsula, southern Cornwall.

The whole sea was covered with sharks from close inshore to the horizon.

The sharks first arrived about 12 May 1998, and a they were still around at the beginning of June.  In Kennack Bay on the southern coast of the Lizard the numbers at their peak were estimated to exceed 200 and some reliable reports put the number closer to 500. There were so many sharks that it was impossible to count them and hard to estimate their abundance.

The Basking Shark, Cetorhinus maximus, is the largest fish found in the seas around the British Isles and is regularly seen off the south-western coasts but usually in ones or twos and only very rarely in such large congregations.


The Basking Shark, Cetorhinus maximus, the largest fish in the sea except for the Whale Shark, Rhincodon typhus. The Basking Shark reaches 10 metres long and weighs 7 tonnes or more. They feed exclusively on plankton, cruising along with the water entering its huge mouth and the plankton collected on the gill rakers, before the water passes out through the broad gill slits.

In UK waters it is believed that the preferred prey of Basking Sharks is the reddish copepod Calanus finmarchicus, which is around 5 mm long. This is reported from examination of stomach contents. A recent study in the Plymouth area discovered that the dominant (and thus preferred) species was Calanus helgolandicus. In other parts of the world, different calanoid species may fulfil the same role.

Fish eggs and various larvae may also be taken because of the indiscriminate way that the shark feeds.

Calonoid copepods and the most numerous of the copepods in the oceans of the world and this is certainly true in British seas where they form the bulk of the prey of the Herring. Calanus finmarchicus and Calanus helgolandicus are almost identical and can only be separated by examination of the basipodite in the fifth swimming leg under a microscope. (Ref: Marine Plankton: A Practical Guide, by GE & RC Newell, Hutchinson Educational 1963). 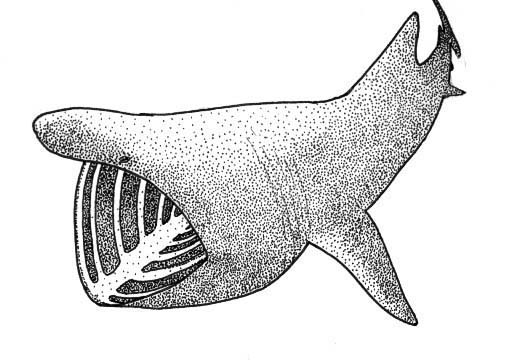 They are often seen because in times of plankton abundance they will cruise in the surface waters, often close inshore with half their body out of the water.

A large plankton bloom is likely to be responsible for this spectacular occurrence that attracted crowds of spectators. The best vantage point were the cliffs overlooking Kennack Bay. The plankton front is carried by  the wind, ocean currents and tides into the bay where it remained trapped by the land. The sharks are likely to remain on the surface until the weather breaks. This occurred in the first week of June. 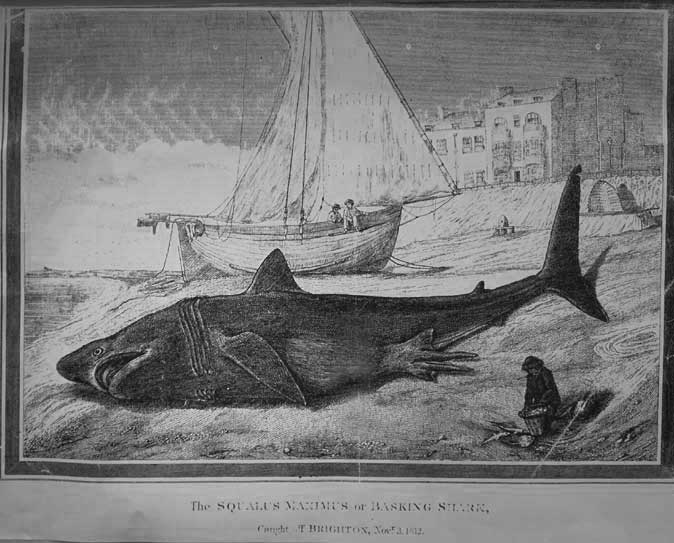 Basking Sharks are present every year off the south-west of Britain and are also well known visitors to the Isle of Man shores. I have seen a huge specimen in the entrance to Shoreham Harbour, Sussex, and in the last century there is a report of the largest recorded Basking Shark stranded on Brighton beach. It measured 11.12 metres long.

Large carnivorous sharks like the Shortfin Mako, Isurus oxyrinchus, and the Porbeagle Shark, Lamna nasus, visit British seas in the summer but these fish rarely exceed 3 metres in length. There are no records of shark attacks on bathers.

The Basking Shark has full protection under the Wildlife and Countryside Act 1981 in British territorial waters.

(There was a EC Quota for 100 tonnes of shark livers.)

Such a huge congregation of Basking Sharks attracted the attention of one of the fiercest and most powerful predators of the oceans. Killer Whales, Orcinus orca, were seen with the whales. It is unlikely to have been a happy coexistence. Killer Whales are armed with a formidable array of teeth and they are known to attack Basking Sharks which must be a rather brutal sight with pods of Orcas tearing into the larger sharks. A large expanse of the sea would have been covered in blood.

Strong evidence that killer whales visit Cornish waters to feast on basking sharks has been presented by the Cornwall Wildlife Trusts marine group.

Information gathered by volunteer members of Seaquest South West shows an almost identical seasonal pattern to the presence of the two species off our coasts.

Observers in Cornwall have long suspected that the killer whales, also known as Orcas, which are regularly seen in spring and summer in Cornish waters, were here to pursue basking sharks.

But the only evidence to back this up had been an account by a West Cornwall fisherman who saw a frenzied attack by a Killer Whale on a large shark off Porthcurno more than 50 years ago.

Weight of the Basking Shark

My best guess for a shark around 9-10 metres long is 7 tonnes.

An estimate was worked out for a 29 ft (8.8 metres) basking shark at Gavin Maxwell's shark factory on the island of Soay as follows:

This gives a total of nearly 6.5 tons, to which may be added 0.5 ton for stomach and intestine contents.

I have historical records of very large sharks by-caught off Cornwall weighed on local harbour cranes at over 6.5 tons

About fifty Basking Sharks, Cetorhinus maximus, including an aggregation of thirty sharks, were seen off Scotland, between Coll and Tiree in the Inner Hebrides.

Basking Sharks, Cetorhinus maximus, make their anuual summer pilgrimage to the seas of the western coast of Scotland. The first image is a still from aerial footage in calm seas off the Hebrides on 12 June 2016. The second still (from a video) photograph shows a 3 metre long juvenile Basking Shark with an adult. Click on the images for the video recordings.

July 2015
Basking Sharks, Cetorhinus maximus, are seen every year off the western shores of the British Isles as the they follow the plankton on which they feed in enormous quantities.

Basking Shark Scotland reported fifty of these huge sharks off the Hebrides in a day's sailing.

23 September 2014
An epic natural tragedy in the sea was witnessed off the Ards Peninsula, north-east Ireland, when a bull seal was spotted by Lena McVea from Ballywalter with a large item of living prey in its mouth, described as pink with a large dark shadow and as big as another seal. This action was seen through binoculars in a deep channel with pladdies, between the Long Rock and the shore. Eventually, a three metre long juvenile Basking Shark, Cetorhinus maximus, was discovered dying on the sandy shallows. The freshly dead shark was taken away for post-mortem.

13 April 2013
The first two Basking Sharks, Cetorhinus maximus, of the year broke the surface of the sea between the Lizard Point and Falmouth, south Cornwall.
"A good seven to eight metres in length feeding about 60 cm down, mouth wide open. We were able to interact carefully with this huge mysterious creature for about 15 minutes, during which time we were giving some exciting views."

6 April 2013
The first inshore Basking Shark, Cetorhinus maximus, sighting records of 2013 came from off the Dingle Peninsula off Ireland. In common with recent years, it was land-based effort watchers at Slea Head, County Kerry (Nick Massett) and another sighting off the south coast of Ireland off Ram Head, County Waterford (Andrew Malcolm & Ann Trimble) that confirmed the annual inshore spring movement.

A juvenile Basking Shark, Cetorhinus maximus, was observed swimming in very shallow water (swimming amongst bathers!) at the coastal town of De Panne (Belgium) . Its length was estimated at around two metres, and it could be identified through the photographs provided by deputy-chief lifeguard Filip Jongbloet. Small Basking Shark sightings are extremely unusual.

Report by Jan Haelters and Francis Kerckhof
Royal Belgian Institute of Natural Sciences
24 April 2012
The first Basking Sharks, Cetorhinus maximus, of the year were seen around the Isle of Man with four adult sharks spotted in Castletown Bay by a local fisherman. The large population in the northern Irish Sea is thought to be resident but they are only seen on the surface in the summer months. Hundreds are seen each year.

A three metre long shark was spotted cruising the shallow seas off Exmouth in south Devon.

Report and Video by Stephen Gale
The consensus seems to think it was likely to be a Basking Shark althought I thought it could be a Blue Shark, Prionace glauca.

24 May 2010 onwards
Some of the first Basking Sharks, Cetorhinus maximus, of the year are spotted off Land's End, Cornwall. "I heard a brief splash as three of the twelve sharks breached the surface"

Other Basking Shark reportsfrom off the coast of Cornwall came from Pendeen and Praa Sands and the odd one off the Lizard. Later reports on 18 May 2010 saw the sharks off Porthcurno and Sennen, Cornwall.

> 4 October 2007
Two Basking Sharks, Cetorhinus maximus, around six metres long, were seen and they stayed around the Farne Isles, NE England, for a week. Anthony Hurd, National Trust Warden, was quoted - "It's only the 17th occasion these large fish have been recorded in the North East and the first time around the Farnes."

September 2007
I was also told about a sighting at St Abbs Head, SE Scotland. A party of the ranger staff were snorkelling at Pettico Wick and had close encounter with a smaller Basking Shark, Cetorhinus maximus, of about 3 to 4 metres in length.

5 September 2007
An astonishing 462+ Basking Sharks, Cetorhinus maximus, were seen in the morning between Longships and The Brisons, off the west of the Cornish mainland!  Accompanying the sharks were many Gannets, suggesting that fish and plankton would have been present. Also, in much the same place (10 km sq. SW 33) between 20 and 24 Rissos Dolphins, Grampus griseus, and 35 Common Dolphins Delphinus delphis, were recorded.

21 April 2007
A Basking Shark, Cetorhinus maximus, was seen near the Lizard, Cornwall, swimming out to the Point. 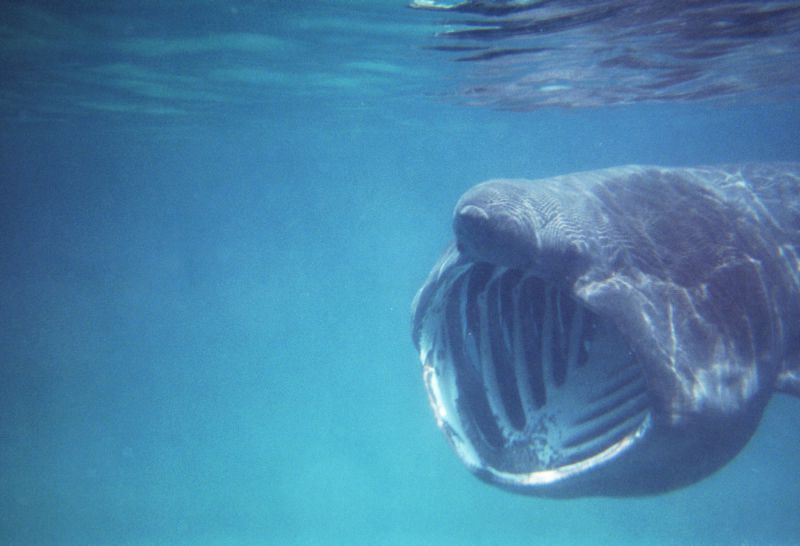 19 April 2007
A small (3  4 metres long) Basking Shark, Cetorhinus maximus, was seen by Edward Murray off Picklecombe Fort at the western entrance to Plymouth Sound around 2:30 pm. It was circling, apparently feeding.

This is the first recorded Basking Shark with location details this year. An earlier 3 metres long Basking Shark was seen off Cornwall on 10 May 2007, but the details are not available.
BMLSS Basking Sharks


Largest One from the English Channel on record

9 July 1999   updated 16 August 2000
Proposal to include the Basking Shark (Cetorhinus maximus) on Appendix II of the Convention on International Trade in Endangered Species (CITES)
DETR  http://www.wildlife-countryside.detr.gov.uk/gwd/shark/Index.htm