The True Crabs are the most numerous in the variety of species, and contain some of the largest crustaceans in the marine world. Typically, they are characterised by a hard protective carapace that covers the whole of the abdomen so that when superficially examined, the three parts cannot be clearly distinguished. The pleopods have evolved into sexual organs, and in the female the pleopods have developed into a flap to carry the eggs.

A reasonably common sight on British shores is the presence of a large male Shore Crab, Carcinus maenas, with a smaller female underneath. They will usually choose a large pool with rocks to mate the female which is in a soft-moult sexually available condition. The female will carry thousands of eggs for seven to eight months, before the larvae are released into the plankton. Other crabs will be 'in berry' for lesser periods, and species from cold waters may incubate them for even longer. 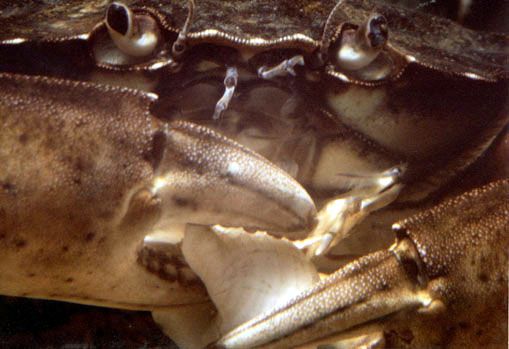 Study of the Shore Crab, Carcinus maenas, feeding on a Dogwhelk, NucelLapillus.

The Shore Crab is a widespread and common species on the shores surrounding the British Isles, including estuaries and rivers during the summer. It can be found on rocky shores and on muddy estuaries where there are a few rocks to hide under. They are scavengers feeding on worms, organic remains, molluscs and other crustaceans including smaller crabs.