All observations by Andy Horton, unless stated otherwise.
It would be tedious to list all sightings on the main pages,  but for flight times purposes the following butterflies and moths include ones not recorded on the main Nature Notes pages:

4 August 2021
Twelve species of butterfly showed on the top of Mill Hill on a surprise sunny afternoon led by the very frequent Chalkhill Blues..
Full List 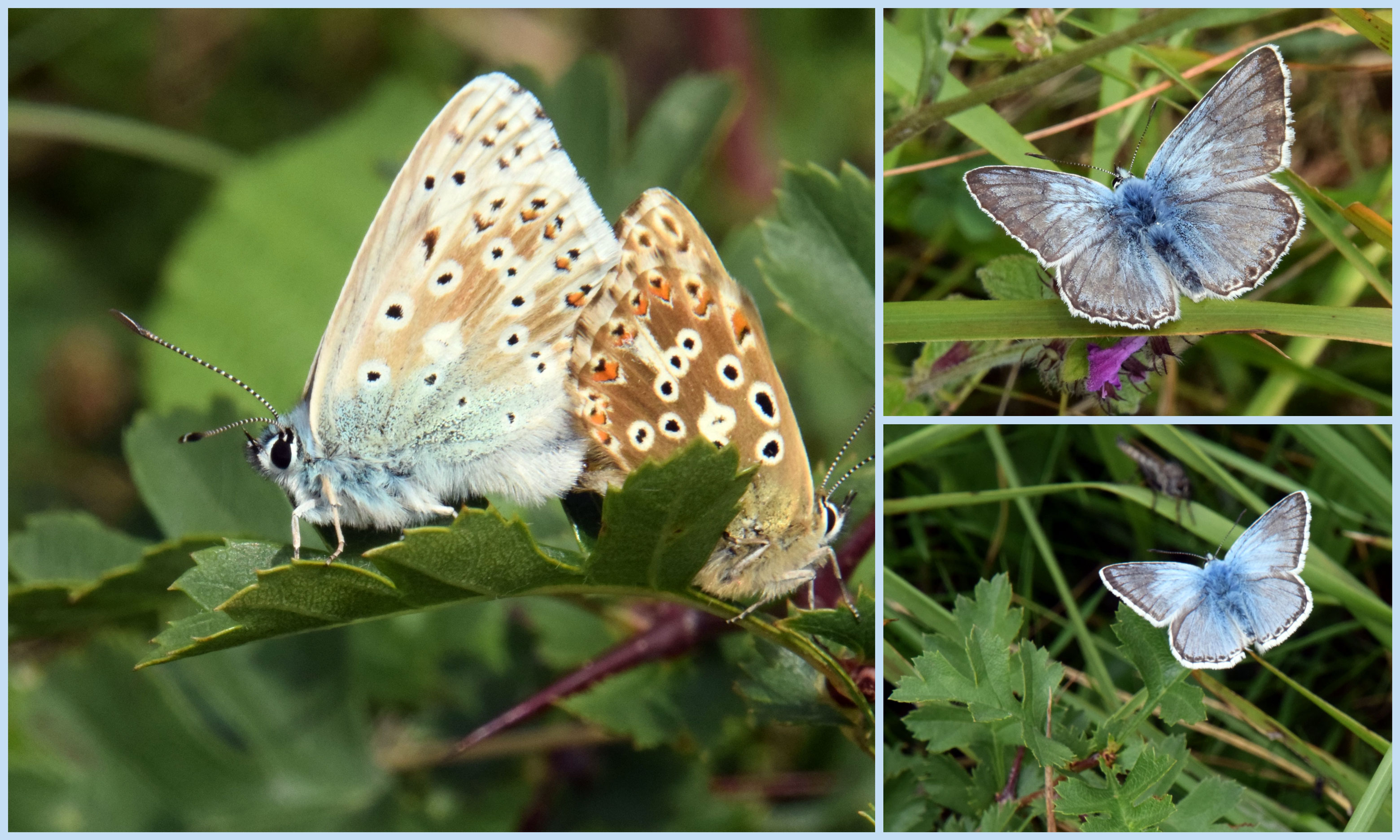 Butterflies fluttered over the lower slopes of Mill Hill under a cloudy sky in the afternoon. Frequent 25+ Gatekeepers, 25+ Meadow Browns, 30+ Chalkhill Blues, including a mating pair, were joined by occasional Large Whites and at least one each of a Marbled White, female Common Blue, Peacock, and Small Tortoiseshell. Treble-bar Moths, Yellow Shell Moths and 6-spotted Burnet Moths were seen. A Kite-tailed Robberfly,Tolmerus atricapillus, waited in ambush. There was one large brown Oak Eggar Moth caterpillar crawling over the path.On the top part south of the reservoir, I added a Brimstone Butterfly. Painted Lady and Small Heath. 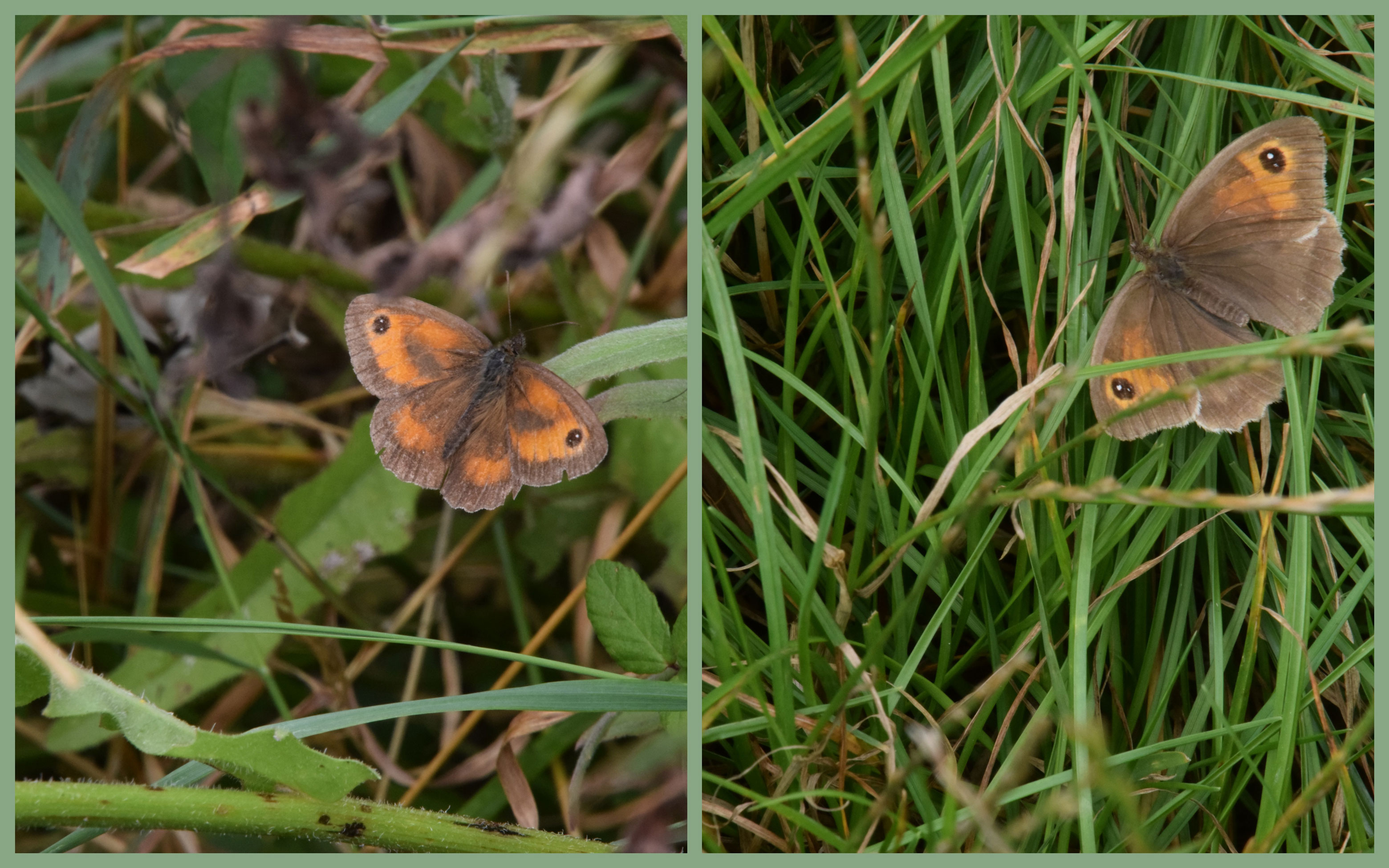 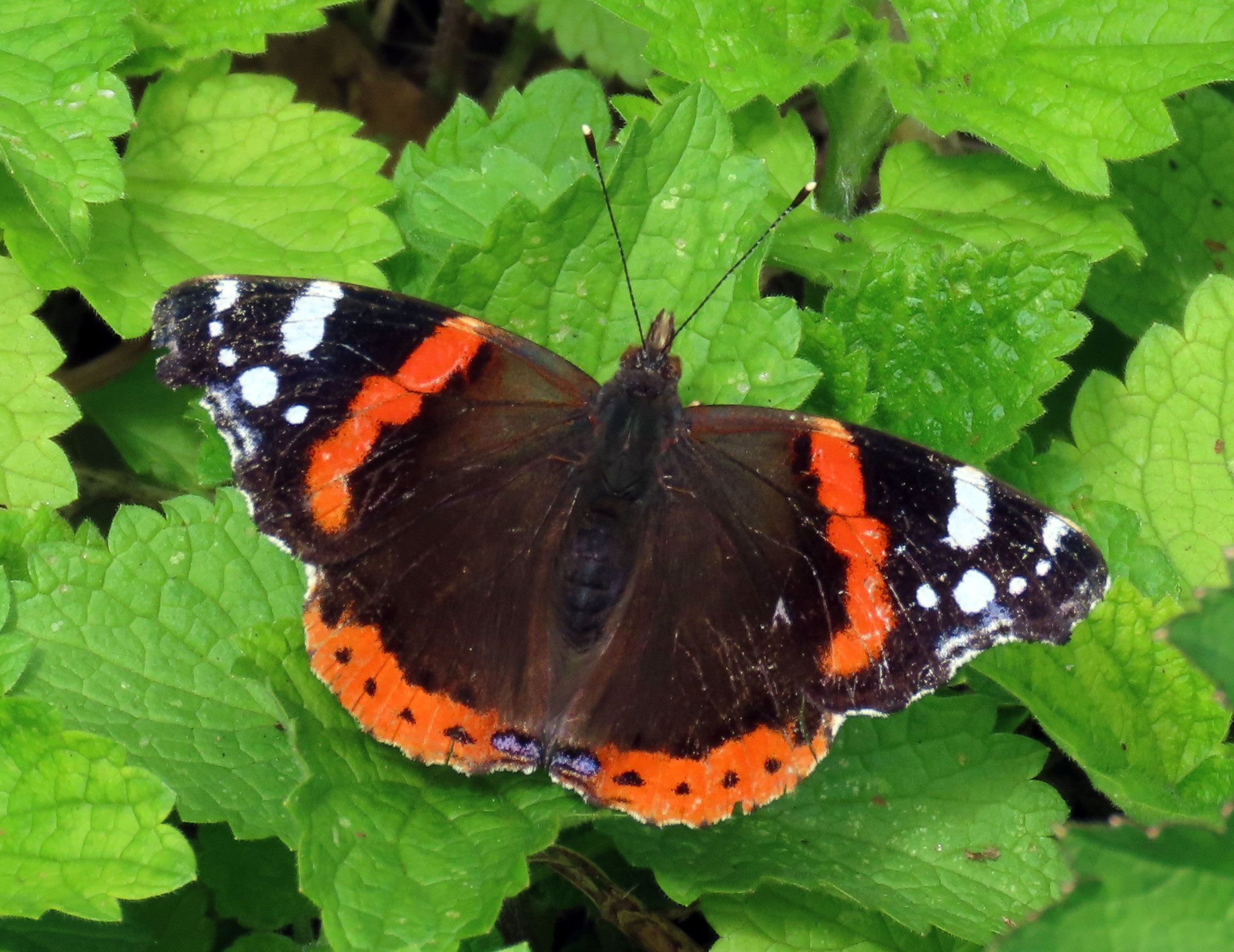 23 July 2021
At last, a handful of male Chalkhill Blue Butterflies fluttered restlessly over the lower slopes of Mill Hill.

19 July 2021
My first Comma Butterfly of the year was seen by some Stinging Nettles in the twitten to Corbyn Crescent by Middle Road allotments.

18 July 2021
A Peacock Butterfly fluttered around in my kitchen on a very sunny day.
On a virtually cloudless day the sun (25º C) burned anybody who ventured out of the shade. I still visited the upper part of Mill Hill in the mid-afternoon where two dozen butterflies fluttered around the attractive selection of chalkhill flowers amongst the long grasses south and west of the top car park. Marbled Whites. Large Whites, and Meadow Browns were all restless. There was at least one Small Heath, a probable Wall Brown and my first Painted Lady of the year on the middle slopes south of the copse, 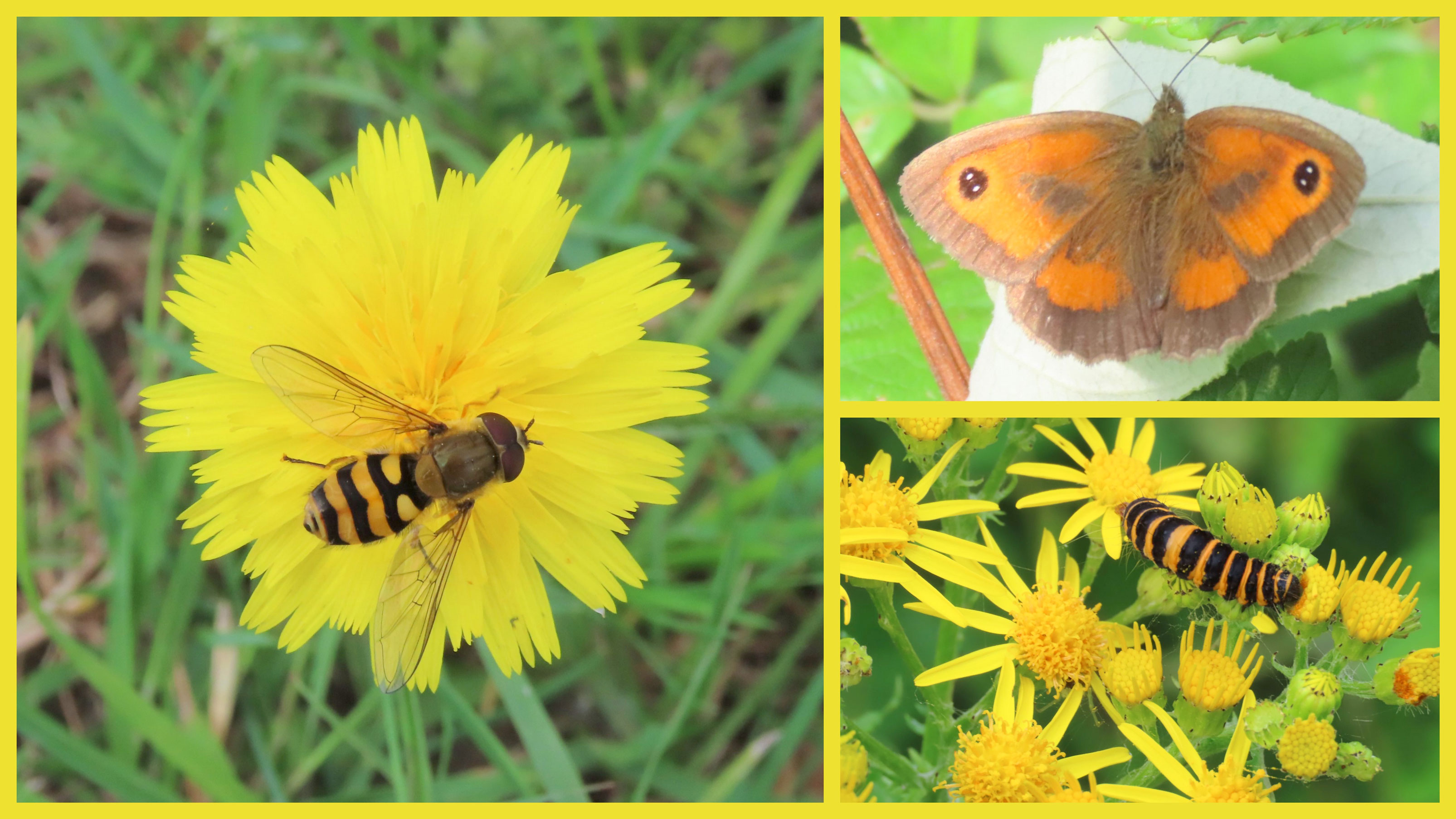 A couple of Gatekeepers on the southern steps to the lower slopes of Mill Hill were the first of the year, Other butterflies were occasional Marbled Whites. Large Whites, Meadow Browns, Red Admirals, a few Small Skippers, Small Heaths and one Wall Brown.

24 June 2021
My first Ringlet Butterfly of the year fluttered around the early post Summer Solstice flowers over the verge of the Downs Link south of  the Cement Works.

14 June 2021
The first of the year Meadow Brown Butterflies fluttered in the sunshine amongst the long grasses and Oxeye Daisies on the bank between  the River Adur towpath and Shoreham Airport.

8 June 2021
A Buzzard soared over a sunny (19°C) Mill Hill in the early afternoon. Butterflies were lively and frequent: Common Blues, Dingy Skippers, Small Heath Butterflies, Brimstones and Silver Y Moths over the lower slopes, A pair of Speckled Woods sparred in the copse at the top of Chanctonbury Drive. A Holly Blue fluttered by the hedge by the southern car park to Mill Hill. 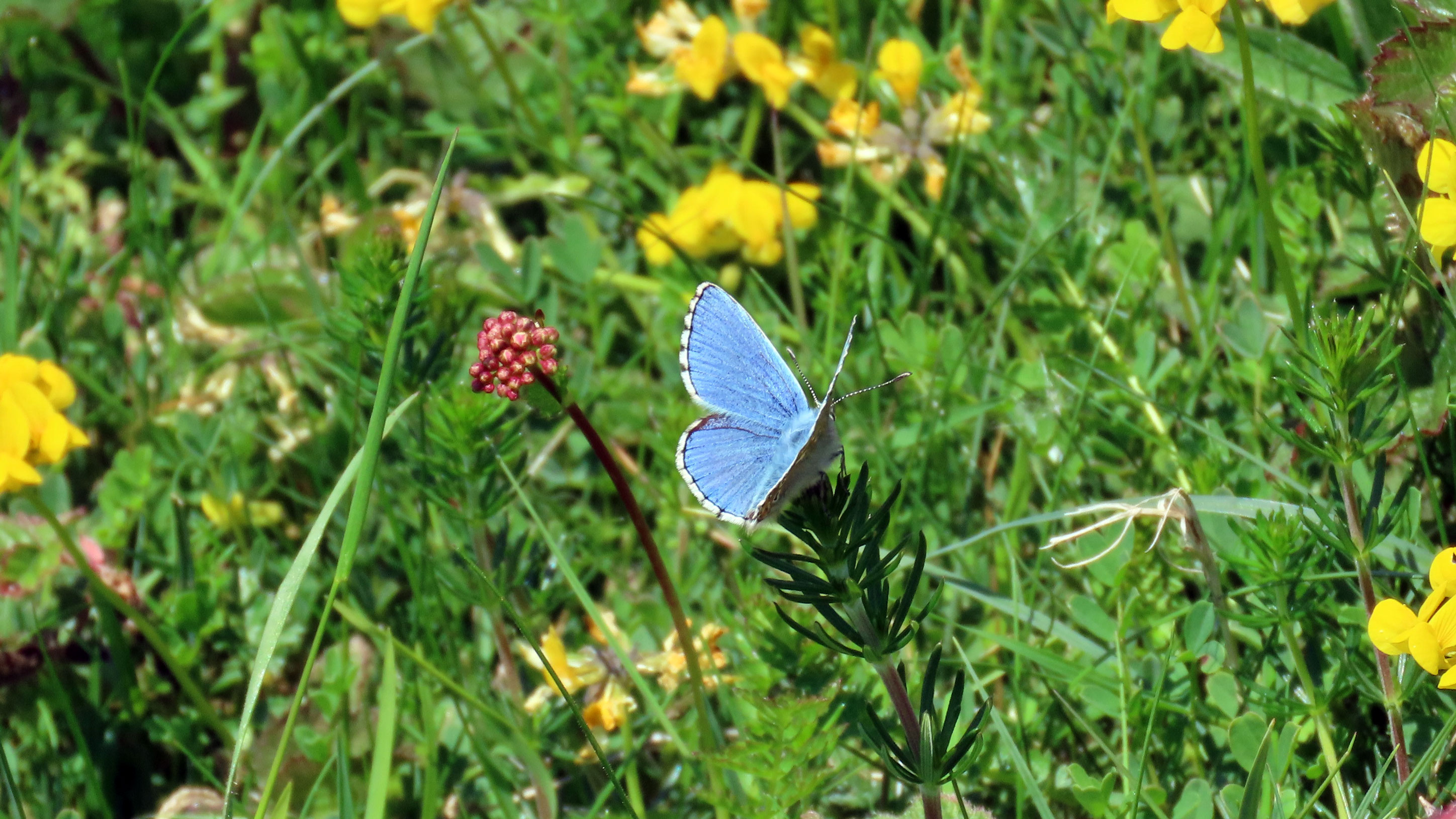 The sun shined in the afternoon for the first time in over a week, I was able to confirm my first male Adonis Blue Butterfly of the year with frequent Brimstones but not many other butterflies on the lower slopes of Mill Hill. Ten species were seen in the afternoon.

19 May 2021
Swathes of Horseshoe Vetch, Hippocrepis comosa, covered the lower slopes of Mill Hill on a cloudy afternoon inimical for watching butterflies. 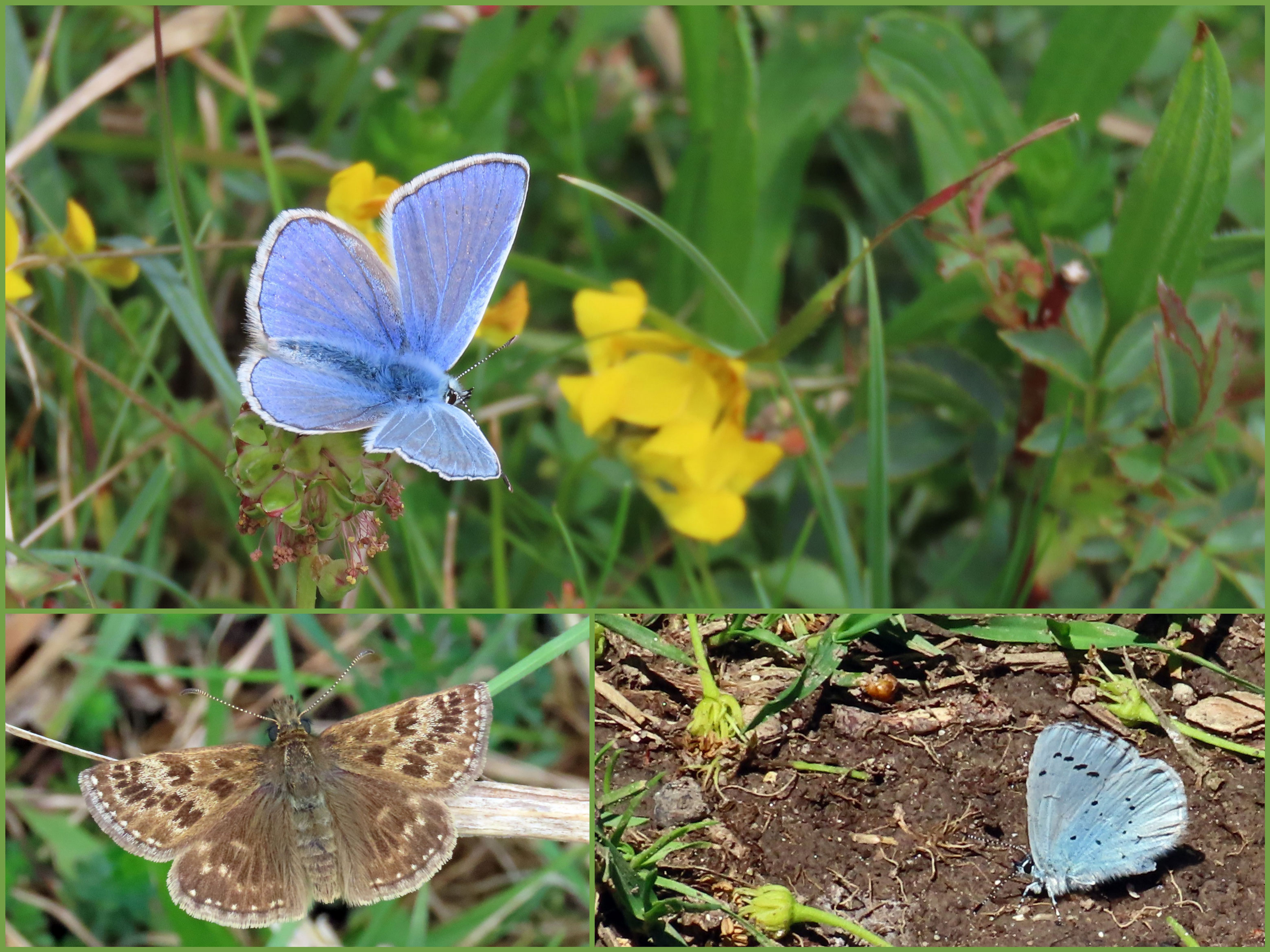 In an hour I spotted to my first of the year Small Heath Butterfly and a few first of the year Dingy Skippers, at least three male Common Blues, a Brimstone Butterfly, a few Large Whites and Red Admirals. At the top of Chanctonbury Drive, the flutter of blue was a Holly Blue. (I was surprised not to see an Adonis Blue.)
Seven species

18 May 2021
Another cloudy day, but I spotted a definite pair of Green-veined Whites over the Downs Link between Old Shoreham and the Cement Works as well as a Brimstone Butterfly and a few Red Admirals.

17 May 2021
Despite a cloudy day with spots of rain, I spotted my first of the year Holly Blue Butterfly and first male Orange-tip Butterfly in Old Shoreham.

12 May 2021
Five o'clock in the afternoon is a bit late in the day for seeing active butterflies on the lower slopes of Mill Hill as most of them will have gone to roost. I did manage to spot my first male Adonis Blue (not confirmed -subsequently thought to be a Common Blue) , and my first of the year Small Copper visiting the abundant Horseshoe Vetch, Hippocrepis comosa. A flock of up to a dozen corvids, mostly Jackdaws. were persistently feeding on something amongst the short vegetation on the steeper slopes. A Peacock Butterfly flew down and I disturbed a handful of Grizzled Skippers.

7 May 2021
Tripping over butterflies at Mill Hill today with a grand total of 14 species recorded. Dozens of Dingy Skipper & Grizzled Skipper, Green-veined White, Small White, Brimstone and a singleton Orange-tip doing the rounds. Wall are coming along nicely with at least half a dozen bobbing around, a female already ovipositing. A handful of Small Copper seeing off all-comers which included my first Common Blue of the year, around 6 males seen. Green Hairstreak also doing well, regularly getting stuck in with the multi species aerial brawls, again about half a dozen active. The afternoon brought out 4 or 5 fresh looking Peacock and there were good numbers of fresh immigrant Red Admirals, a female was seen egg laying (from the state of some they must have come via Jersey!). A single Comma made a very brief appearance (unable to tell if it were an early hutchinsoni or a late hibernator). The day started off with a rare Sussex sight of a female Small Tortoiseshell avidly investigating some nettle on the edge of the horse paddocks on the south side of the Shoreham Bypass.

17 April 2021
A Small White Butterfly flew down Corbyn Crescent in Shoreham in the sunshine. 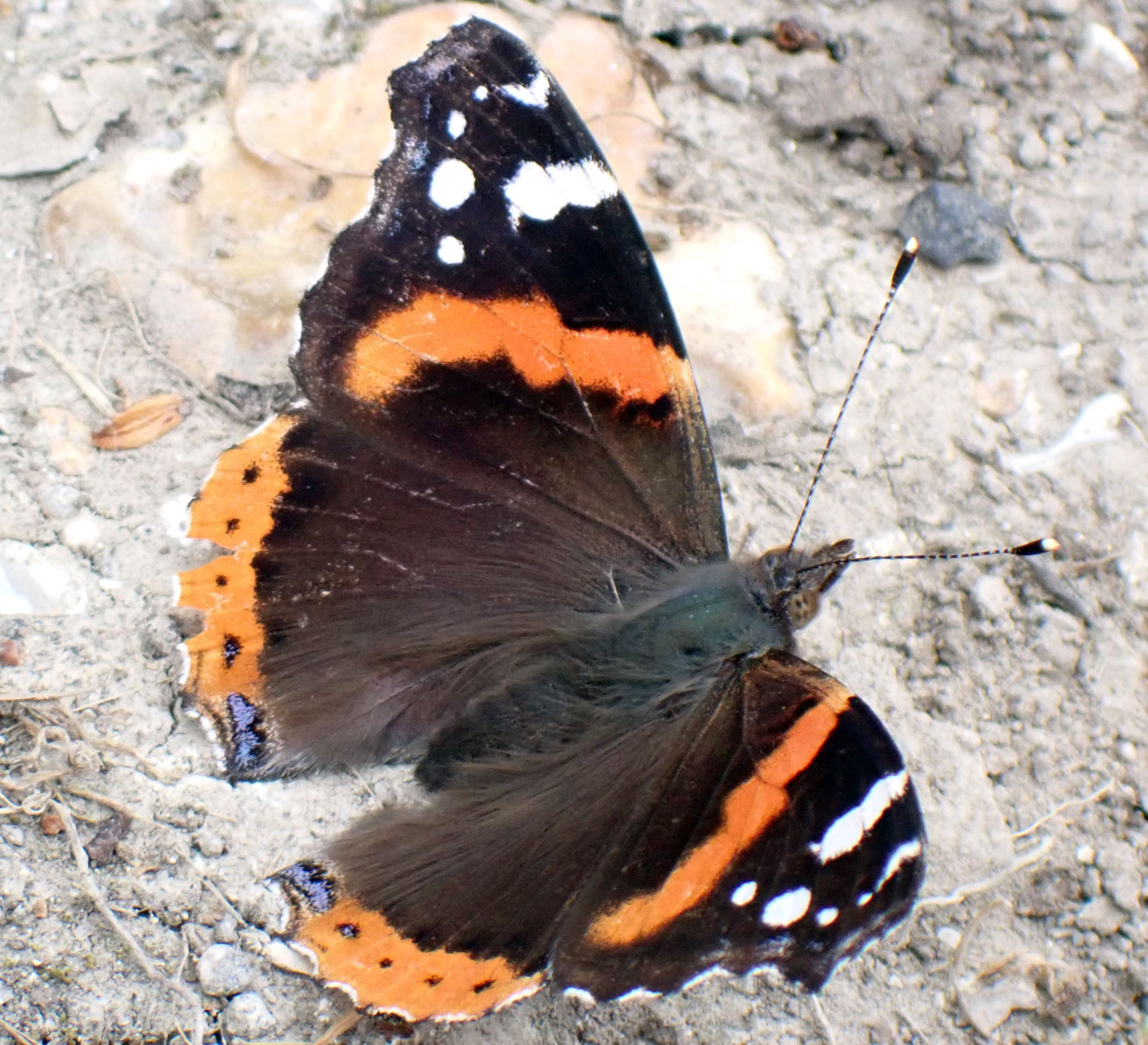 Red Admiral
at the top of Chanctonbury Drive, north Shoreham 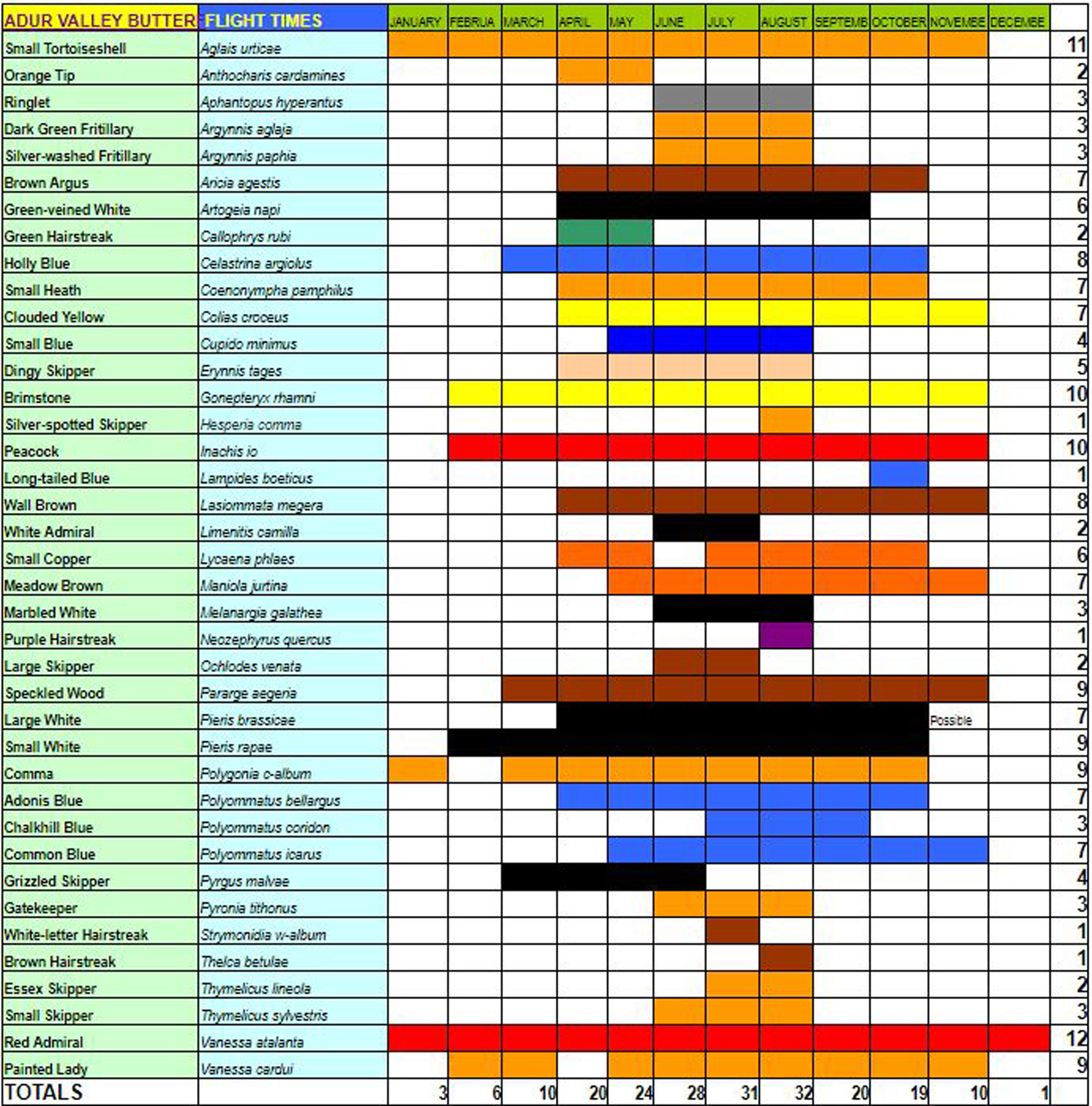 Prevalence Definitions (does not apply to birds):

TBI: To be identified

NEW ACFOR SYSTEM OF ABUNDANCE OVER A SPECIFIED AREA:


MultiMap Aerial Photograph of the Adur Levels and the Downs