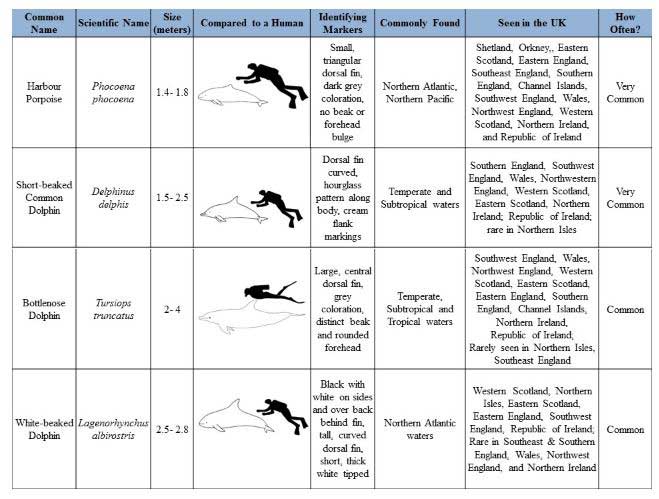 Click on the image to link to the comprehensive data file

CSIP: How to report a stranding

NB:  Page to be revised

To most people, whales and dolphins live in distant oceans. They have an image of the great whales in the cold polar waters and of dolphins that leap and frolic in warm, tropical climates. In fact, there are at least 23 species of whale and dolphin that frequent British waters.

While some areas, such as Cornwall and Scotland, appear ideal waters for whales and dolphins, they have also been observed in unlikely places such as the busy shipping lanes off the Sussex coast. This year there have been many sightings of dolphins and porpoises along the south coast of Britain.

Most people that see these delightful creatures do so by accident, they just happen to be in the right place at the right time. However, there are places around the British Isles where you are more likely to see dolphins and whales, than elsewhere.

But even if you do see a whale or dolphin, how do you distinguish it from the other 80 species found worldwide? Well, generally speaking, animals over 4 - 5 metres (12 - 15 ft) long are known as whales, and animals smaller than this are called dolphins and porpoises. Porpoises can be distinguished from dolphins by their smaller stubby bodies and lack of a visible snout, or beak. Porpoises also have a small triangular dorsal fin, while dolphins have a larger, more curved dorsal fin. Size and colour of the animal, spout shape, and behaviour can also help to identify the animal sighted.

So let us take a closer look at some of these cetaceans from the common to the more unusual:

The only species of porpoise recorded in British waters is the Common Porpoise, Phocoena phocoena, sometimes known as the Harbour Porpoise. This species is also frequently sighted, due to it living mainly close to the shore. The Common Porpoise can be sighted off the north west coast of Britain and Ireland, and occasionally in the English Channel. It is usually found in small groups, rarely grows larger than 2 metres (6 ft) long and it is a very active species.

There are five species of true dolphin sighted in British waters. These are the Bottlenose Dolphin Tursiops truncatus, Common Dolphin Delphinus delphis, Striped Dolphin Stenella coeruleoalba, Atlantic White-sided Dolphin Lagenorhynchus acutus, and White-beaked Dolphin Lagenorhynchus albirostris. The Bottle-nosed Dolphin is the species most frequently seen, often in groups as it is a very sociable species. Bottle-nosed Dolphins grow to an average length of 3.1 to 3.7 metres (10-12 ft). The only known breeding areas around the British Isles for this species are the Moray Firth and Cardigan Bay. 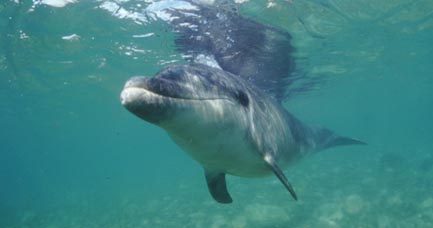 The Common Dolphin is widely distributed along the west coast and in the North Sea, and the much rarer Striped Dolphin, Stenella coeruleoalba, is found to the south and west of Britain and Ireland.

Although the main body colour is dark grey with a white underside, Common Dolphins have distinctive yellow markings which run along each side of the body, from just above the beak to level with the dorsal fin. Many species of dolphin have been observed riding the bow wave of boats, but none more so than the Common Dolphin.

The Fin Whale, Balaenoptera physalus, reaches a length of 24 metres (79 ft), and is the second largest species in the world. They are seen mainly in a sea area from north Scotland to south-west Ireland. The smaller Minke Whale, Balaenoptera acutorostrata, is the species most frequently observed from land. Again, this species is usually sighted from the Shetland Isles to southern Ireland.

The Fin and Minke are types of baleen whale. Instead of teeth, the mouth is filled with baleen plates which hang down from the roof of the mouth, and are used to sieve the water for tiny creatures. Baleen is made of fibres with a similar structure to feathers, nails and claws. Minke Whales have a coarser baleen than some species and include small fish in their diet.

The Sperm Whale, Physeter catodon, is the largest species of toothed whale, reaching 18 metres (59 ft) and weighing 57 tonnes (male). This whale is capable of diving to a depth of more than 1000 metres and can remain submerged for over an hour. A fatty substance in the blood prevents dangerous nitrogen bubbles forming in their blood on deep dives, so they are able to descend to great depths, and return to the surface without decompression.

The Sperm Whale can be seen off the west coasts of Ireland and Scotland, usually sighted alone. As they are a deep water species, they are usually only observed from a boat. The large blunt head and forward angled spout make the Sperm Whale one of the easiest species to identify. However, because of its lengthy dives it is hard to spot.

The Long-finned Pilot Whale, Globicephala melas, is a social species of whale living in family groups that on occasions may number between 100 and 200 animals. Pilot Whales migrate north at the end of each year as they follow the squid, which form the main part of their diet. Although this species has been killed for many years by the Faroese in a traditional fishery, the Pilot Whale is one of the few species of cetacean that appears to have increased in numbers.

The species of cetacean that most people are surprised to discover inhabits British waters is the Killer Whale, Orcinus orca. This large member of the dolphin family is somewhat unfortunately named 'Killer', as it has given this species a fearsome reputation - even though no records exist to suggest that it will attack humans.

In some waters, Killer Whales do supplement their diet with warm-blooded mammals such as seals and dolphins, and it is this habit that has earned them their name. However, I prefer to call them by their scientific name - Orca.

Orcas live in family groups and are very social. They produce a wide variety of sounds which are used to navigate, find food and as a social communication that strengthens the bond between pod members. A male Orca may exceed 9 metres (28 ft) and is easily identified by its black and white markings and very tall dorsal fin. Small numbers of Orcas can be found in northern areas of the North Sea and off Atlantic coasts of the British Isles. Seals are eaten by Orcas in British waters. They are attacked and killed by knocking the animal into the air with a flick of the powerful tail. Capable of reaching 55 kph (30 mph), Orcas are the fastest swimmers of all the whale and dolphin species. 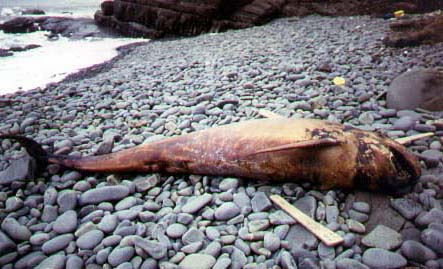 Risso's Dolphin washed up on a Cornish beach (Colin Speedie)

The Risso's Dolphin,Grampus griseus, is sometimes mistaken for the Pilot Whale, Globicephala melas, due to its similar body shape. Risso's Dolphin can be distinguished from the latter by its grey body colouring which is often criss-crossed with white scars. Risso's Dolphins are usually solitary or found in small groups and are widely distributed from the western areas of the English Channel to the north of Scotland. 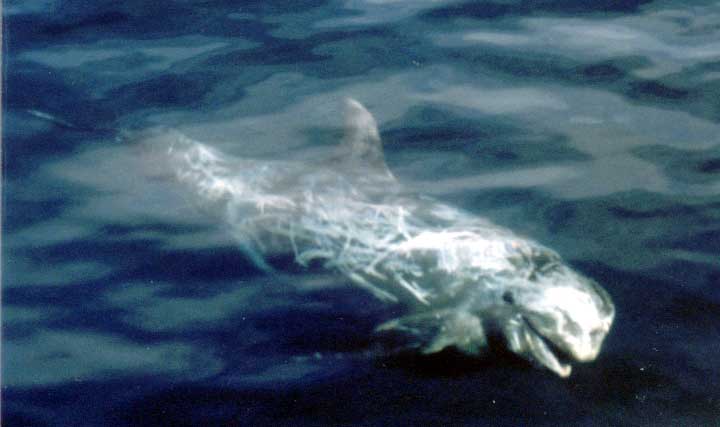 Cuvier's Beaked Whales, Ziphius cavirostris, are a deep water species and are not usually observed from the shore. A typical characteristic of beaked whales (there are 18 species worldwide) are the two elongated teeth which grow upwards from the lower half of the beak in males.

The Cuvier's Beaked Whale has two such teeth which protrude from the tip of the lower jaw. This species is found in the deep waters of the North Atlantic.

The Northern Bottle-nosed Whale, Hyperoodon ampullatus, is also a deep water species. It is usually observed off the Atlantic coasts of northern Britain and Ireland, during the summer months. This species has a very pronounced forehead and in many ways resembles a very large Bottle-nosed Dolphin, Tursiops truncatus.

Other whale and dolphin species have been recorded on rare occasions in British waters, including the Northern Right Whale, Eubalaena (=Balaena) glacialis, one of many species whose populations were decimated by whaling; the Humpbacked Whale, Megaptera novaeangliae, well known for its eerie hunting song; the Beluga Whale, Delphinapterus leucas; and the Blue Whale, Balaenoptera musculus - the largest animal to ever have roamed the earth.

Humpback Whales, Megaptera novaeangliae, are rare in British seas, but have been observed more frequently in recent years. They can be identified by their large white pectoral fins. From a distance they resemble Fin Whales, but Humpbacks raise their tails before diving.

Before you start looking for whales and dolphins, there are a few items of equipment that you will need. Firstly, a good pair of binoculars and, if possible, a camera with a telephoto lens, as these will help you with identification. A note book is also essential, so that you can make a note of any behaviours and anatomical characteristics such as the shape of the tail and dorsal fin, shape of spout, body colour etc., all of which will aid identification of the species. Sometimes, only part of the body is visible.

It is also essential to have a good guide to Cetaceans, and a rough idea of what species that you are likely to see in the area that you are observing. Armed with this knowledge and basic equipment, you will have a much better chance of seeing dolphins and whales.


Difference between a Dolphin and a Porpoise (Link)

Whether they reached British Waters alive however is another matter.

?  What to do if you find a stranded whale or dolphin  ?

If you find a LIVE stranded or injured whale or dolphin on the beach you must send for help QUICKLY. A whale or dolphin stranding is an emergency and the speed of response by a professional rescue team is perhaps the most crucial factor in determining whether or not an animal can be returned to the sea alive.


LINK TO THE STRANDINGS PAGE

CETACEA
all the world's whales, dolphins and porpoises on one site!
species breakdowns, latest news, threats, shopping, pictures,
maps and much much more --- all on the giants of the deep!
CETACEA - http://www.cetacea.org