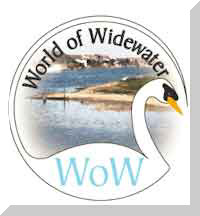 7 October 2010
Six Cormorants rested on the island at the eastern end of Widewater Lagoon, whilst a seventh Cormorant dived under the surface and caught and at the surface swallowed a dozen small fish in as many minutes. Two Little Egrets fished in the shallows. The gauge by the bridge over Widewater Lagoon registered 1.65 metres, the highest I have ever recorded.
Cormorant Video 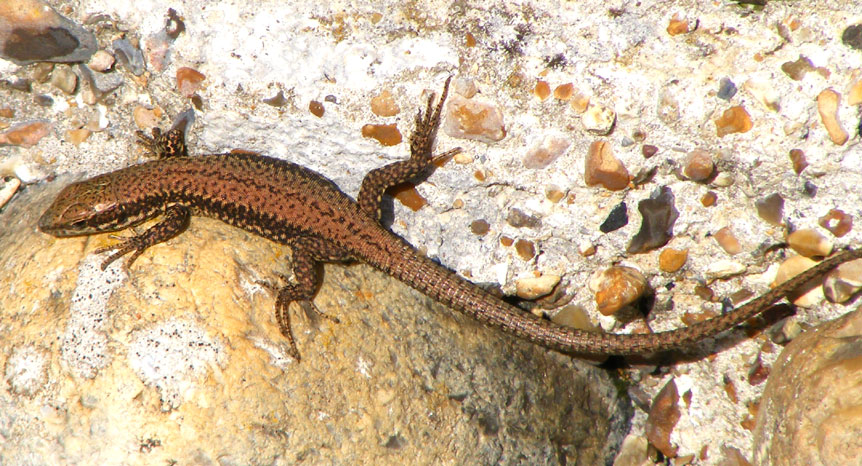 Lizards basked in the brief period of sunshine. Over a dozen juvenile Wall Lizards, Podarcis muralis, skittered amongst a few rocks near the Old Fort and over the flint walls at the far eastern end of Shoreham Beach, with two much larger adults seen and there were probably many more present.

17 September 2010
A Cormorant dived under Widewater Lagoon and surfaced with a flatfish too large for it to swallow.

Eight white butterflies were seen half of them Small Whites and the larger four were Large Whites and six of them were seen flying strongly in a south-north direction from the shingle beach over the cyclepath (path from Worthing to Shoreham Beach that runs parallel to Widewater though south Lancing). Thrift was still in flower with Dandelions on the grass verge of Widewater north of the bridge where a Little Egret was disturbed whilst fishing in the shallows.

6 September 2010
A couple of plants ofSea Aster were noted with their lilac petals of the rayed versions on the Adur mudflats to the west end of the main houseboat moorings. Sea Asters, Aster tripolium, exist as rayed and rayless varieties but only the former have long blue or white florets. The rayless form is yellow with just disc florets.

1 September 2010
A Red Admiral Butterfly flew straight in off the sea between the beach huts at Lancing Beach Green and a smaller than normal one was seen in a road nearby.

12 August 2010
Arching its neck forward, on the mid-tide line at Silver Sands, a Little Egret swallowed and engulfed a small fish every 30 seconds, whilst the nearby Cormorant stood motionless for five minutes before taking to the water and diving under. The small fish were probably first year Bass in very shallow water. They could not be identified through the binoculars but the fish were taken from the surface waters rather than the bottom. Possibly, they could have been Sand Smelt.

Over the shingle near the Old Fort, the white rear of a Wheatear was easily spotted as it flew around prior to emigration south. On the flint carnot wall a single adult Wall Lizard, Podarcis muralis, ruffled the vegetation as it skittered into hiding. A Large White Butterfly fluttered around the Sea Kale and a Common Blue Butterfly landed on the pebbles by the Old Fort. The Common Blue Butterfly seen and shown in the photograph above may be the variety/aberration Polyommatus icarus ab. arcuata. A vanessid butterfly took to flight before I stepped on it. It flew away too quickly to identify. 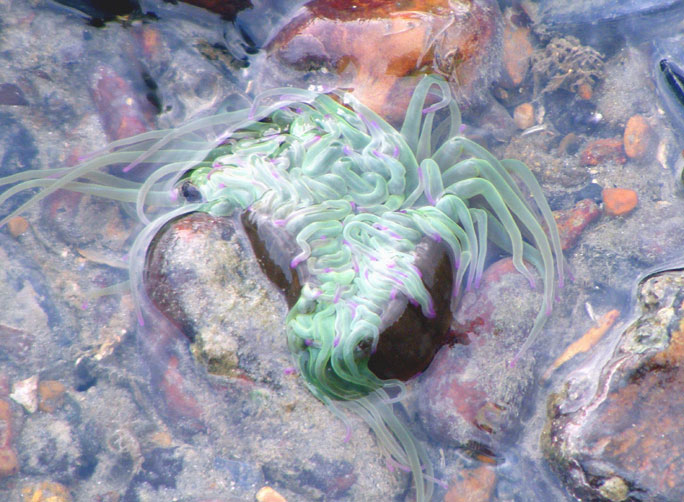 A very quick visit to Kingston Beach to collect a few mussels and I spotted scores of Rock Goby, Gobius paganellus, fry darting around in the highest shallow pools by the groynes plus a single large Snakelocks Anemone, Anemonia viridis, in an equally shallow pool. This anemone is unusual on the shore at Shoreham.

16 July 2010
There were at least five Little Egrets on Widewater Lagoon, four congregated together water side of the Tamarisk east of the bridge. Rock Samphire was a new plant spotted in flower, by the wooden fence that separates the Coastal Cyclepath from the shingle beach at the Lancing end of Widewater.

15 July 2010
A WSW Force 5 Breeze made for some appreciable waves breaking on to the shore carrying significant amounts of weed on to the strandline.

5 July 2010
There were six cygnets following their parent Mute Swans up a ramp into a grassy back garden from Widewater Lagoon.

A native of the Mediterranean region, Red Valerian, Centranthus ruber, has naturalised on Shoreham Beach with spectacular effect in June, with the flower dying down from July. Red flowers predominate but clumps with white flowers occur frequently.

The dominant plants on Shoreham Beach near the Old Fort were Sea Kale (globular seed pods. no longer flowering), Red Valerian, Viper's Bugloss, and Silver Ragwort. Present in small but noticeable quantities were Sea Thrift, the naturalised Michaelmas Daisies, Common Mallow, Tree Mallow, Yellow-horned Poppy, White Stonecrop and Sea Campion. The small Biting Stonecrop had obviously been flowering for some time, but this was the first time I had noted it in flower this year. The small tree Tamarisk was profusely in flower.

30 June 2010
Silver Ragwort was flowering profusely on the shingle beach directly south of Ferry Road, Shoreham Beach, and noted for the first time this year.

7 June 2010
Shoreham Beach was profusely in flower with over a hundred swathes of Sea Kale and Red Valerian east of Ferry Road (that runs south from the Waterside Inn, south-east of the Footbridge). Silver Ragwort was budding but not flowering, but its silver leaves make it look more attractive before the flowers appear. There were lesser amounts of Common Poppy, Slender Thistle, Tree Mallow and Viper's Bugloss near the Old Fort where I stumbled over a small patch of Starry Clover in flower.

There was a clump of Squid eggs washed into a rockpool by the Old Fort.

The twelfth Adur World Oceans Day went well in the marquee on Coronation Green, by Shoreham footbridge at the High Street end on the opening Saturday of the Adur Festival. Len Nevell of the British Marine Life Study Society was there with the usual exhibition of lobsters and crabs.
World Oceans Day on Facebook

"The aim of the event is to introduce the young visitors to the world of the sea and seashore,
an opportunity they may not get. It is an educational event
with an opportunity for children to participate in the interactive activities."

3 June 2010
There were thousands of Moon Jellyfish, Aurelia aurelia, in the Shoreham Harbour canal section with hundreds of different sizes seen from the lock gates.

25 May 2010
Tree Mallow and Purple Toadflax were noted in flower for the first time this year on the verges of the coastal cyclepath to the west of Lancing Sailing Club and Common Mallow was also noted although I had seen it before this year. Not yet in flower, but the strands of the alien Japanese Knotweed surrounded the Information Booth at the eastern end of Widewater.
Worthing Beach Intertidal Report

21 May 2010
My first shrimping outing of the year using my smaller three foot wide shrimp net on the medium tideon Lancing Beach (Widewater West) yielded a rather poor 30 or so Brown Shrimps, Crangon crangon, and a notable young Turbot, Psetta maxima.
Full Shrimping Report
Sea Campion was noted in flower for the first time between the Widewater Cyclepath and the wooden groyne-type fence. Black Medick was also seen.

20 April 2010
In the weak sunshine the first reptile of the year was spotted on the wall of the Old Fort, Shoreham Beach: an adult Wall Lizard, Podarcis muralis, (with an intact tail) skittered into a hole the size of a flint cobble on the south-facing wall. A single Thrift flower was seen, the first of the year, although many others were budding and expected to flower any day now.
Adur Lizards

3 April 2010
A dead Harbour Porpoise was washed up on the bank of the River Adur about 100 metres north of the old Toll Bridge.

Report by Steve Savage on Sussex Marine Jottings
1 February 2010
There was a large range of seven metre tides measured by WXTide at Shoreham Harbour (Kingston Beach), from 6.9 metres high to minus 0.1 metres below Chart Datum.
BMLSS Tides

11 January 2010
A Redwing flew under a Tamarisk bush in a shingle garden on Lancing Beach (to the west of Lancing Sailing Club). This bird species moves south to Sussex in severe winters. Widewater Lagoon was only partly frozen with large areas (75%) of open water.
RSPB Redwing

The saline Widewater Lagoon was frozen over with a very thin layer of ice; a cobble-sized stone thrown in would go though the ice, which was strong enough to support over thirty Black-headed Gulls. The central area of the lagoon, east of the bridge, was ice-free.
Adur Intertidal & Coastal Reports 2009