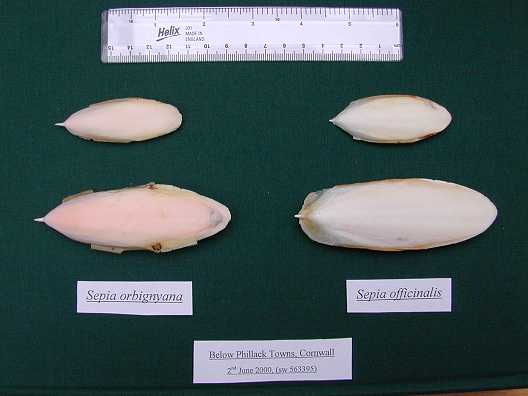 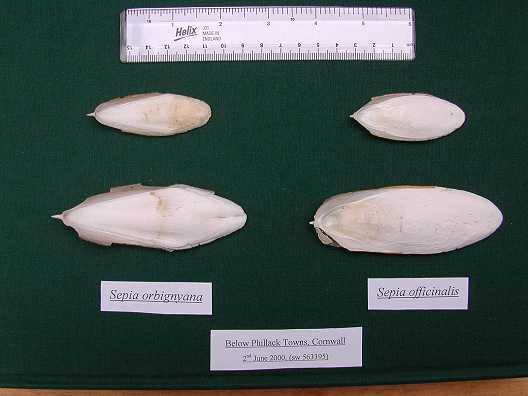 You have to be very careful with the identification of the two cuttlebones. It is the angle of the spine that is important and you will have to go to Matt Stribley's site below to see the small detail. In old specimens of Sepia officinalis the cartilage on the outside of the cuttlebone can break away and then the shape will resemble that of Sepia orbignyana.
The following pictures shows this. They are both Sepia officinalis. The first specimen has been damaged and assumes a different shape which means it could be confused with Sepia orbignyana. 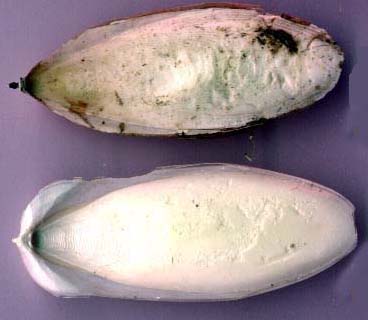 The body of Cuttlefish is made rigid by the internal cartilaginous skeleton or cuttlebone.

28 January 2003
The cuttlebones of all three species of large British cuttlefish, Sepia, and a Spirula (a tiny mesopelagic cephalopod) shell were also found in the squally conditions on the shore on Perranporth Beach, Cornwall.
Extended Report

18 March 2002
After a few days of gales a large standing of Common Cuttlebones, Sepia elegans, is a reasonably common on Cornish shores. However, the stranding of over 100 cuttlebones on Polperro beach, south Cornwall included seven specimens of the rarer species Sepia orbignyana.

26 January 2002
Along the stretch of coast from west end of Whitsand Bay (Seaton) to Par, and especially Hannafore Point and Looe Harbour beach very many small cuttlebones as you describe over last week, mostly Common Cuttles, Sepia officinalis, but also smaller numbers of Elegant, Sepia elegans, and Obigny's, Sepia orbignyana. The unusually large number of adult Common Cuttles (100-180 mm) too, sometimes numbered several hundred.The situation is difficult to monitor accurately as the stormy weather tends to deposit the cuttlebones, then remove them at the next high tide and (presumably) drop them again elsewhere. These large concentrations I have noted before in previous years after prolonged periods of strong south-west winds, so would suggest that it is likely that weather conditions are causing the unusually high number of strandings of these floating objects.

Report by Jon Makeham.
We are getting very large numbers of cuttlebones about 40-60 mm long stranded along the shores of Whitsand Bay (East Cornwall next to Plymouth Sound) and in Plymouth Sound. Are there similar strandings elsewhere at the moment?
First report by Keith Hiscock
via the Marine Wildlife of the North-east Atlantic Ocean Group
Re the Cuttlefish Sepia orbignyana: it is figured in the new Collins Pocket Guide to the Seashore of Britain and Northern Europe.  I was pleased to see that it has a published common name - Orbigny's Cuttlefish, whilst S. elegans is cited as the Elegant Cuttlefish.  We reckon there has been 5% or less of the former in the Cornish wreck this year.

Today on Perranporth Beach, Cornwall, Paul Gainey found the cuttle bones of all three species of Sepia.  Most of the bones were in very good condition, and ten of them were the smallest species, Sepia elegans.  He also found a large coconut, still with its outer husk, as well as Buoy Barnacles (Lepas fascicularis) and By-the-Wind Sailors (Velella velella).  Many live mussels were cast up, many of them containing  a female of the tiny crab Pinnotheres which lives in the gill cavity of the host.

Photographs on the new identification file 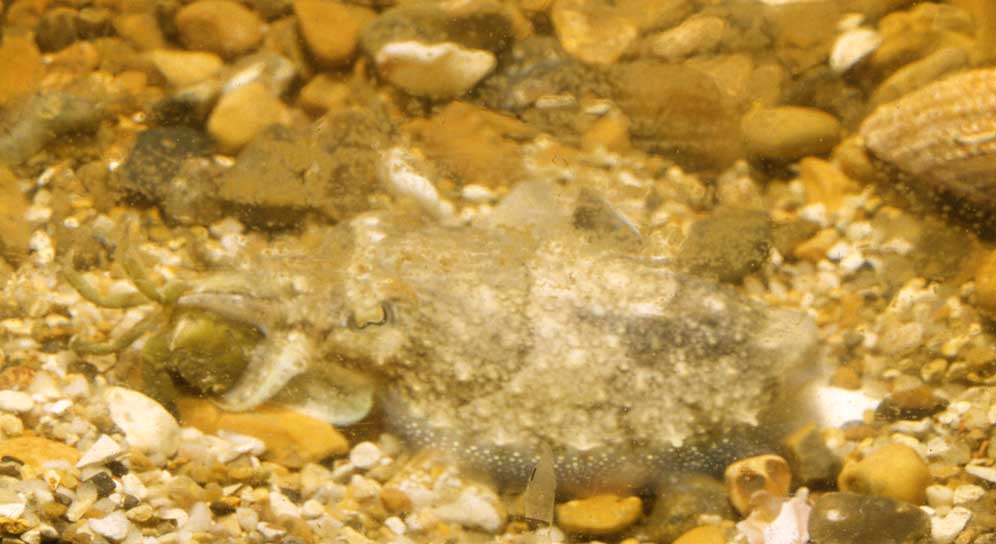