22 May 2008
A male Common Blue Butterfly fluttered over the expanses of Bird's Foot Trefoil, with plenty of Sea Kale, Ivy-leaved Toadflax and Thrift in flower with Sea Campion, Scarlet Pimpernel, Sow Thistle,all prominent on the Widewater flood plain near the pipeline inlets. There did not appear to be any clear signs of where the gravel had been disturbed to bury the inlet pipelines.

7 May 2008
From the promenade cyclepath the shingle flood plain of Widewater near the pipeline inlets was seen to be covered in patches of violet, which was assumed to be Ivy-leaved Toadflax.

14 April 2008
A Peacock Butterfly was seen fluttering around the flood plain of Widewater to the west of the bridge, south of one of the pipe inflows.
Adur Butterfly List 2008


On the flood plain of Widewater Lagoon where the gravel and pebbles had been disturbed to install the pipeline, there was a varied collection of plants as though the terrain had never been disturbed in the first place. Ivy-leaved Toadflax still dominated but there was plentiful Sea Kale, Bird's Foot Trefoil, Sea Campion, Thrift, Sea Beet, Dandelion, Stonecrops and other plants, including a few Yellow-horned Poppy.

29 May 2004
The first of the two photographs below were taken on the land that was laid bare when the pipeline was installed: 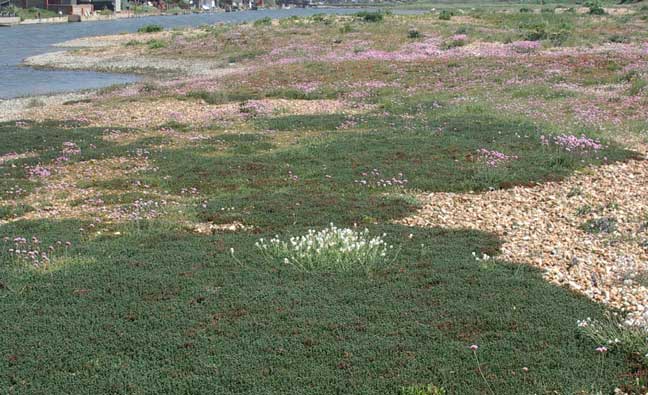 19 May 2004
The dark green expanses in the photograph are Sea Heath.


15 May 2004
A year ago a large expanse of the Widewater flood plain was bare gravel because it all had been churned over to construct the new pipeline.

Colonisation was expected to be swift and one year later the shingle is covered by the blue-violet of Ivy leaved Toadflax, with splatterings of other ground-hugging plants like Scarlet Pimpernel, small patches of Stonewort, clumps of Sea Campion, one or two Bird's Foot Trefoil, and a few small Sea Kale plants. Sea Thrift produced the usual attractive sweeps over the gravel, but none of this had actually sprouted forth from the disturbed ground. A Ringed Plover was well camouflaged against the shingle and plants.
Photographs of the colonised and nearby area

16 July 2003
The increased lagoon water levels could possible have a detrimental effect on the flood plain flora. 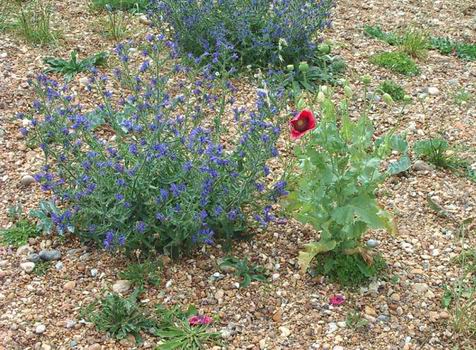 A few stretches of Orache greened the disturbed gravel where the pipeline had been laid and a few plants pushed their way from the gravel on the Widewater margins.


Small ground-hugging plants on the gravel:

24 May 2003
The sun shines through a cloudy (Cirrus, Cumulus/Stratocumulus, and Stratus) sky on to the patch of Sea Thrift:

14 May 2003
The soil and gravel that had been disturbed for the pipeline at Widewater was like a bare desert between large drifts of the Sea Thrift and patches of Sea Kale. A pair of Ringed Plovers rose from amongst the Thrift. 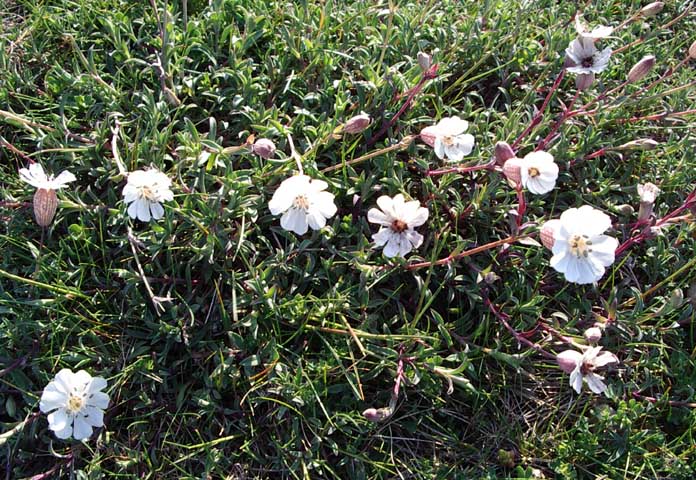 On the Widewater flood plain, on the gravel and soil that had been lifted to install the new pipeline and then replaced, the Sea Campion was noticeably in flower. There was just one or two Bird's Foot Trefoil plants showing.

The new pipeline from the sea to Widewater Lagoon has been landscaped and now merges into the shingle bank. After a couple of months of low rainfall, the lagoon salinity rises to a high figure of 25.5 (as high as any recording last year).
Widewater Salinity Records 2002-3 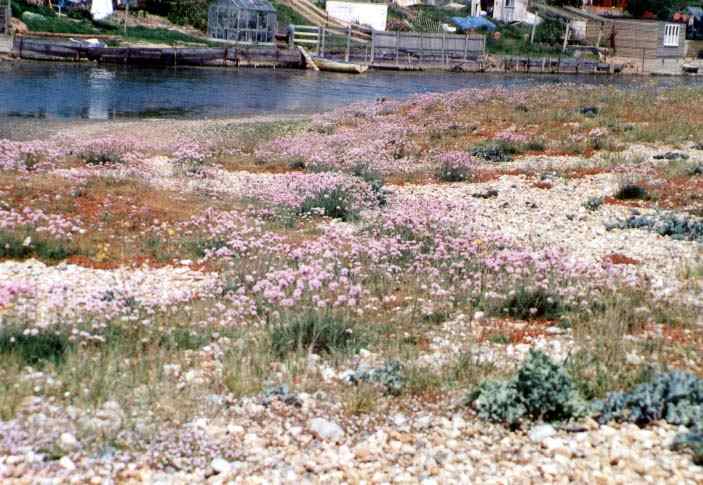 Photograph by Steve Barker (May 1999)

The flood plain contains some interesting flora, including the Sea Thrift, and is also a breeding area for the Ringed Plover. This area is bordered by a steep bank on the seaward side up to a concrete path adjacent to the lagoon &/or car parks.

Back to Widewater Lagoon