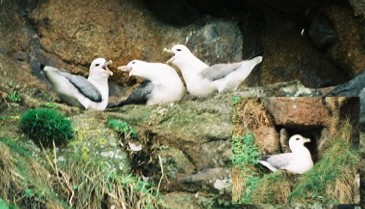 To add to what Brett described in his email, colour phase of fulmars cannot
be used for identifying races in the field.

It's difficult to pigeon-hole colour phases of this species except to use
Fisher's 'double light' phase and combine the rest as not 'double light'.
This is the convention now used by the European Seabirds at Sea
co-ordinating group (ESAS), because we found it difficult to one person's
assessment of a 'dark' phase versus another's.  The ESAS group uses the
convention of light (meaning double light) and dark (meaning light, dark and
double dark).  The ESAS 'dark' phase birds range continuously from those
with a few darker feathers around the head to the darkest phase birds
(Fisher's 'double dark') which appear chocolatey-brown in most lights at
sea.  A small percentage of ESAS 'dark' phase birds can be found nesting
around the UK.  What most people describe as 'blue' fulmars would fall into
the Fisher 'light' and 'dark' categories.  I can only think of about 3-4
birds I've seen at sea around the UK which might have fallen into the
'double dark' category, generally occurring in the northern North Sea in
mid-winter.

There are 2 races of Fulmar - nominate glacialis in the Atlantic, and rodgersii
in the Pacific. Each race has dark and light morphs, and everything in between.
The lightest and darkest rodgersii are lighter and darker than the respective
colour phases of the nominate race. So Blue Fulmar is not a race, but a colour
phase (dark) which, in the Atlantic, predominates in the high Arctic, and is
basically a scarce visitor to the southern part of the range.


BWP states that "in many high-arctic localities .... dark and intermediate
morphs (Fisher's 'double dark', 'dark', and 'light') form great majority of
population. I'm sure this is a misinterpretation of what was said in Fisher's
book 'The Fulmar', in which he classifies Fulmars, for convenience and
consistency in reporting, into 'double light', 'light', 'dark' and 'double
dark'. What Fisher said was that dark forms predominated, by which he means
only 'double dark' and 'dark', and definitely not 'light', which latter is
classed with 'double light' as 'pale'.

BWP mentions that in the Pacific race rodgersii "lightest colour morph
lighter, darkest darker than in nominate glacialis of Atlantic", though
under the 3 subspecies view ours is actually auduboni.

I had good views of an "all-white" Fulmar from a ferry off Mousa,
Shetland on 6 August 1990 - wholly-white excepting a few very light
brown feathers in the primary coverts.  Heinzel, Fitter and Parslow
refers to "a rare almost white form" which I presumed this to be at the
time, though I'm not sure how that could be told from simply a leucistic
individual.  I've not managed to find any other info about occurrence of
this form in the UK, though I seem to recall reference to it somewhere
as "ivory-phase"...

Hi,
Blue Fulmars are not a race of Fulmar, the are a colour morph. I think
there are two or three races, depending on which book you check in,
and they all have various proportions of different colour morphs.
James Fisher, in "the Fulmar" in the New Naturalist series describes
the subspecies and says "each of the groups is polymorphic,
containing, light, dark and intermediate forms".
cheers,

I am still not quite clear about Blue Fulmars. I assume these to be a
northern race of the same species.

I have not found a profound information source as my bird books do not
mention it.


I do not know if it is a genetic or an environmental variation. Can the
birds inter breed?

Any further information sources would be of interest.