including the Adur Levels, Mill Hill and cyclepath to Upper Beeding

5 December 2005
Along the Coombes Road a few large trees had been felled. The harmful Honey Fungus was evident and on one heavily lopped tree there was a bracket fungus at least 60 cm in the diameter of its semi-circular appearance.
Adur Levels 2005 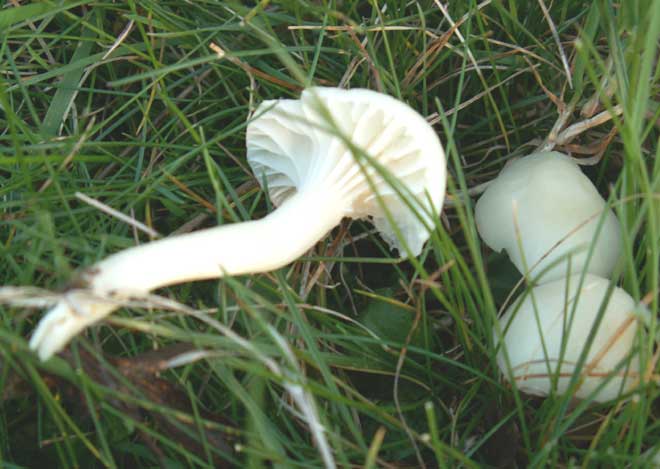 22 November 2005
In the Triangle area (middle slopes) of Mill Hill there were over a dozen small mushrooms called the Pale Wax Cap, Hygrocybe berkeleyi, (known on the British Mycological List as Hygrocybe pratensis var pallida) near the seat. The largest had a cap diameter of 38 mm, and the tallest was at least 50 mm high.
Adur Hygrocybe

All the fungi recorded had been seen before and those identifications are used again for a dozen or so Golden Wax Caps, Hygrocybe chlorophana, discovered on the A27 road embankment (Mill Hill Cutting) just east of the bridge section where it crosses the Waterworks Road; a handful of clumps of the small Dermoloma* mushrooms totalling about a dozen on the Pixie Path approach to Mill Hill from the Waterworks Road; a small Panaeolus sphinctrinus amongst the grass (not the dung as usual which was not observed) on Frampton's Field;and a large intact species that I was so sure it was Volvariella gloiocephala that I did not inspect it for its volva. This last one was on the edge of the meadow north of the car park on Mill Hill. Its gills were brown.
*Later (2014) the species was thought to be the Crazed Cap, Dermoloma cuneifolium.

Sulphur Tuft, Hypholoma fasciculare, is such a common species of fungus that it only just about gets a mention. In these photographs of a clump on a tree stump in Windlesham Gardens, Shoreham, they are further developed (than shown below) and the stem ring can now be clearly seen.

After the rain the designated footpath (between the Waterworks Road and the Steyning Road, Old Shoreham) produced a two species of mushrooms growing in the soil amongst the leaf litter of Field Maple: Sulphur Tuft, Hypholoma sublateritium, with gills with a blue tinge and Sulphur Tuft, Hypholoma fasciculare, with a yellow tinge to its gills (although this would not reproduce in a photograph).

30 October 2005
On the long grass verge island in The Drive, Shoreham, outside number 40, there was a smallish Dryad's Saddle (toadstool) amongst the grass with a large (about 15 cm) cap that had become inverted. There was probably a root underneath as this large fungus usually grows on wood, usually found on tree stumps of felled trees or rotten logs.

The largest mushroom measured 90 mm cap diameter with a curved stem that was at least 120 m long. Although from the images it looks like they were surrounded by grass, they were actually growing on a burnt log.

The designated footpath (between the Waterworks Road and the Steyning Road, Old Shoreham) produced a two mushrooms growing in the soil amongst the leaf litter of Field Maple. I have tentatively identified this species as the Rooting Shank, Oudemansiella radicata. The stem was quite strong and could not be broken easily, although one of the mushrooms was easily uprooted. The height of the fungus was measured at 90 mm and the cap diameter as 50 mm.
Link to an Image showing the rooting attachment
Adur Levels 2005

There were over a dozen large Agaricus mushrooms growing under a ? tree in Southdown Road, Shoreham. They looked edible. The cap diameters of two of the opened up mushrooms were measured at 60 mm and 70 mm. These mushrooms deliquesced very quickly and two stored specimens were inedible the following day. These are probably the edible Field Mushroom, Agaricus campestris.

A half a dozen fresh Shaggy Parasol Mushrooms, Macrolepiota rhacodes, were growing amongst a pile of leaves in the twitten between Corbyn Crescent and Adelaide Square, Shoreham, on the edge of the Middle Road allotments. Their average cap diameter was a measured 73 mm and their height was over 100 mm.
Shoreham Urban Wildlife 2005

13 September 2005
On the large pile of horse dung in Frampton's Field (north of The Street, Old Shoreham) there was a large number of mushrooms.

They looked like Panaeolus sphinctrinus to my inexperienced eye.

4 September 2005
There was Honey Fungus Mushrooms (a pest species of trees) on the Hawthorn scrub immediately to the north of the lower slopes of Mill Hill.

There was a Dryad's Saddle, Polyporus squamosus, attached to the base of a wooden sculpture on the Coastal Link cyclepath near the first layby (from the south) on the Steyning Road. 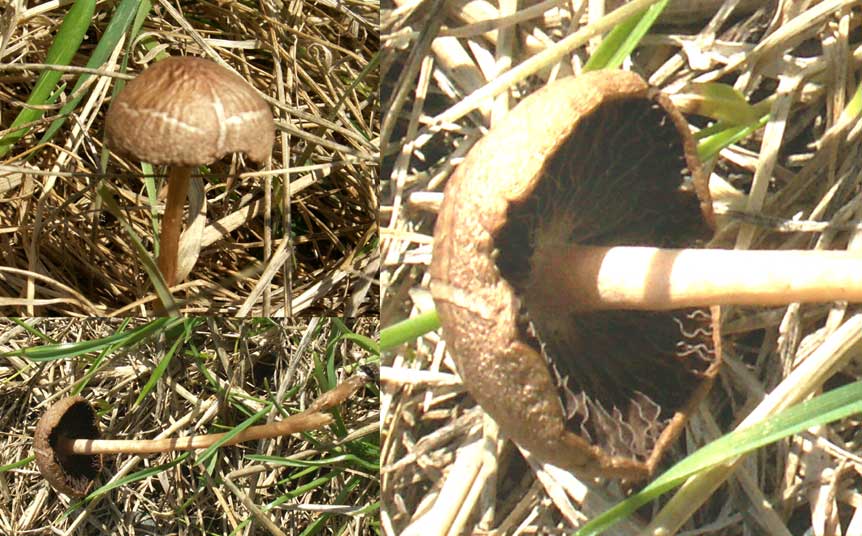 This small mushroom was found on the grass on the shingle near Old Fort. The photograph is probably not good enough for identification. The cap is about 25 mm in diameter. I neglected to measure the long stem of about 100 mm. It could be a Coprinus, one of the Ink Caps?