Fungi of the Urban Adur Area in November 2004 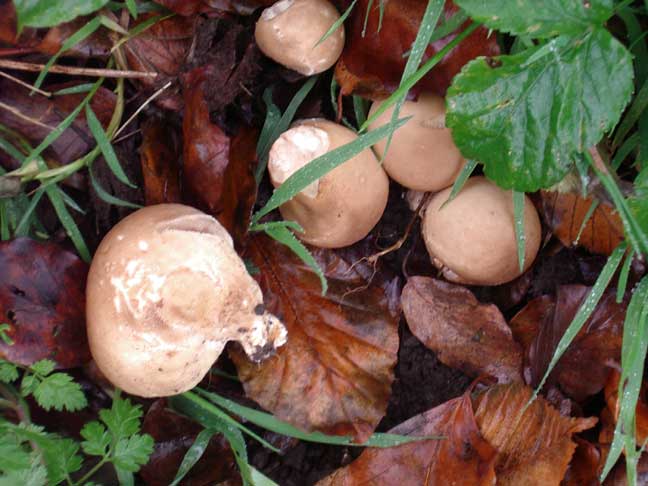 There were about ten Puff Ball Mushrooms, Lycoperdon perlatum, near the rotten log at the north of Buckingham Park by the central gap in the park wall.

3 November 2004
All the species were present and most of them photographed on the aforementioned date. However, in the case of the mushroom numbers 5 and 11, both the mushrooms were in too poor a condition and photographs taken at a different date will be substituted.

At the base of a healthy tree on Southwick Green

Between the cracks on a concrete verge in Dolphin Road, Shoreham
The diameter of the cap was 71 mm.
The spore print was not all that successful. It came out a moist, very light brown, almost orangey (fulvous).

On a bit of greenery at the edge of the wood in the land north of Brooklands Lake
Slightly decurrent gills
This mushroom was about 30 mm in cap width.

The mushrooms were in too poor mushy condition for a photograph. The image was from Shoreham in December 2003.

Roadside verge, Lancing
The cap diameter was up to 100 mm.
Pronounced mushroomy smell

On a flower bed in Lancing town centre
No ring, mottled stem
Firm mushroom, compared to (2)

They would appear to be Lepista nuda, the Wood Blewit.

On a private lawn near Lancing railway station

ID (to genus) confirmed and the species suggested by  Malcolm Storey (BioImages) on Fungi of the British Isles (Yahoo Group)
This could be Ctilocybe delbata. Both species are poisonous.

On a private lawn near Lancing railway station

Tiny fungus under a private lawn near Lancing railway station