including the Adur Levels, Mill Hill and cyclepath to Upper Beeding
Link to Adur Fungi 2007

17 December 2006
I noted the following mushrooms in passing: frequent Panaeolus papilionaceus var papilionaceus and at least one Snowy Ink Cap, Coprinus niveus on horse droppings piled up on the edge of a field by the Steyning Road, Old Shoreham; occasional Wood Blewit, Lepista nuda, mushrooms and the small Candle Snuff Fungus, Xylaria sp., in the Field Maple Spinney between the Steyning Road and the Waterworks Road; and one discarded probable White Dapperling, Leucoagaricus leucothites on the ridge of Mill Hill.

13 December 2006
The Wood Blewit, Lepista nuda, mushrooms were now only occasionally seen in the Field Maple Spinney between the Steyning Road and the Waterworks Road. All of them were now brownish.

28 November 2006
I discovered some unusual blue-green mushrooms in a shady lawn area of St Bernards Court, Broadwater, Worthing. They were close to some wooden edging.
Report and Photographs by Ray Hamblett on Lancing Nature Notes
and on the flickr British Fungi & Lichens Gallery
Ray Hambett's Fungi Portfolio


These were first identified (incorrectly) as fresh specimens of the Verdigris Agaric, Stropharia aeruginosa, the first of this species recorded on these Nature Notes pages.

ID Suggestion by Andy Horton
It is a Stropharia: Stropharia caerulea (=S. cyanea) or Stropharia pseudocynea if it smelled of pepper!)

I wondered about Stropharia aeruginosa, as the cap is much brighter blue than you normally see in Stropharia caerulea or Stropharia pseudocynea. But Stropharia aeruginosa is an uncommon woodland species and your habitat looked like amenity grassland (there was a board and a straight edge to the grass) which is dead right for Strophari acaerulea.
Stropharia aeruginosa has a persistent, spreading, membranous ring, whereas the other two have a weak fugacious (=disappearing) ring. It also has white spots on the cap margin, although these can wash off. If you want to be really certain, you need to check the cystidia on the gill edge (microscope).

Further photographs by Ray Hamblett were taken that seems to lead to my original ID.

The consensus on the important Fungi of the British Isles (Yahoo Group) was that these were a species of Stropharia.
Another Image (Link)

27 November 2006
The number of Wood Blewit, Lepista nuda, mushrooms on the leaf litter in the Maple Spinney between the Steyning Road and the Waterworks Road was now over 25 and the largest ones measured over 70 mm in diameter. There was one closed Common Ink Cap, Coprinus atramentarius next to a buried root or twig.

The two small mushrooms above appeared attached to the leaf litter in the Maple Spinney between the Steyning Road and the Waterworks Road. The first white specimen (its gills were white) was associated (if not growing on?) with a partially buried wood or root, but the second blue specimen had already been dislodged from its leaf litter and was lying prone when discovered. The first was thought to be a young Common Ink Cap, Coprinus atramentarius, and the second a young Wood Blewit, Lepista nuda.

28 October 2006
Four species of mushroom have now been seen in a field by the Steyning Road, Old Shoreham. Snowy Ink Cap, Coprinus niveus, was now recognised and the snowy/flaky appearance of the conical cap could be seen clearly. One older mushroom had a flat cap.

The second mushroom was frequently seen in the grass next to the dung and looked very similar in shape, but the cap and stem were dark and the caps were slightly larger. My first identification is for Panaeolus rickenii (wrong, see below). I could not get a closer look at the mushrooms because of the barbed wire and electric fence.  A third mushroom was also seen in the dung. I think this latter one was a species of Conocybe. The fourth species has a flattened cap and was much larger, estimated at over 60 mm cap diameter with a stem that could not be seen.

27 October 2006
Mushrooms discovered in the afternoon were a dozen the white-capped species growing on horse droppings piled up on the edge of a field by the Steyning Road, Old Shoreham. These are illustrated in the first two photographs on the left below. The white stems of this species were hollow.
Species: Snowy Ink Cap, Coprinus niveus
Adur Dung Fungi

The small Candle Snuff Fungus, Xylaria sp. was seen in the Maple Spinney between the Steyning Road and the Waterworks Road with the remains of a large badly damaged Sulphur Tuft, Hypholoma sublateritium, (possibly a Wood Blewit). There were Jew's Ears on a Hawthorn on the scrub on the lower ridge of Mill Hill. And I spotted what were half a dozen probable Lactarius pubescens (a type of Milk-Cap)* on the verges of Mill Hill Road where the Bee Orchids were discovered earlier this year. They were on grass and herbland about one metre from two Silver Birch trees. (Photograph above, far right.) (I originally penned these as Sulphur Tufts.)

23 October 2006
Amongst a patch of long grass near (west of) the Reservoir on Mill Hill and surrounded by Hawthorn bushes, the tall mushroom Volvariella gloiocephala was spotted to the side of me as I walked along the path. It is illustrated (first left) below.

After the rain, a couple of mushrooms and the Nostuc commune was there as expected on the lower slopes of Mill Hill. Again the mushrooms (illustrated in the centre two frames above) were elusive to identify. The gills were greyish-white but similar mushrooms have been seen with black gills on the upper part of Mill Hill before. There was no sign of a ring around the stem. The cap was about the size of a commercial mushroom, an estimated 55 mm in diameter.
Entoloma bloxamii.
BioImages image link for this species

The final small mushroom on the far right (above) was seen on a small mossy wood stump in the Maple Spinney between the Steyning Road and the Waterworks Road.

On the lower slopes of Mill Hill, One medium-to-large white mushroom seen at the southern end had a pure white cap with a diameter of 55 mm, white gills and a white 90 mm stem with a ring, and it was probably the White Dapperling, Leucoagaricus leucothites. Two more were seen in the central area of Mill Hill.
Fungi of Mill Hill

8 October 2006
On the lower slopes of Mill Hill, a handful of small mushrooms protruded above the short grass and herbs. This fungus has now been identifed as a species of Stropharia. There was another larger mushroom just above the ridge, but this had black gills and appears to be an Agaricus species. These were species seen frequently before and every year at varying times, usually after rain.
Images

4 October 2006
Two Shaggy Parasol, Macrolepiota rhacodes mushrooms were seen in the pile of leaves next to the twitten between Corbyn Crescent and Adelaide Square, Shoreham, on the edge of the Middle Road allotments. These mushrooms are found here every year, at least for the last three years.

6 September 2006
Honey Fungus was seen on Hawthorn on Mill Hill (on the northern part of the lower slopes by the path that enbters the scrub).

10 & 21 May 2006
A single mushroom appreared (two mushrooms on separate dates) amongst the grass in my front garden of the rather dull species Coprinus plicatilis.

The small mushroom above was frequent (12+) on Spring Dyke, north of Old Shoreham. The largest specimen (illustrated on the far right above) had a cap diameter estimated at 25 mm, but most of them were half this size.

24 April 2006
It was hazy misty it the late afternoon. The small mushroom was discovered again on the lower slopes of Mill Hill.

I have still not identified this species which is an irregular occurrence after rain. This is probably Stropharia sp. This might be a different species at S. semiglobata.

There was a surprise clump of mushrooms next to the Slonk Hill Cutting path on the south side. 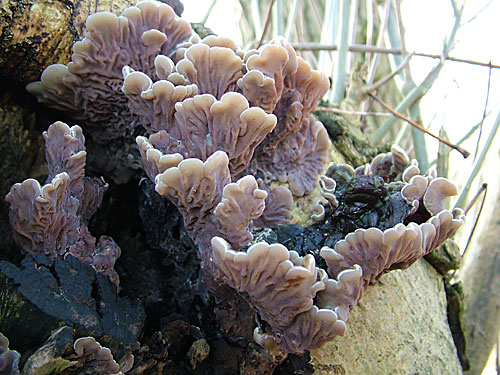 16 February 2006
The fungi on a felled fallen Ash on Lancing Clump looked very much like the Tripe Fungus, Auricularia mesentrica.

1 February 2006
A single small (5 pence-sized) mushroom on the flattened reeds of the Spring Dyke was a Tubaria furfuracea.

I did not discover this small insect (springtail?) until I examined the photograph.

20 January 2006
Fungi noted in the wood to the east of McIntyres Field (east of Lancing Clump) were the black blobs called King Arthur's Cakes, Daldinia concentrica, on upright and fallen trees and there were many fallen trunks and branches in the wood and under Lancing Clump where I recorded some Trametes bracket fungi.

9 January 2006
On the rotten Elm north of Ladydell's, north of Cuckoo's Corner on the Coombes Road, there were orange fungi growing on the dying trees. These were Velvet Shank and there was at least one Jew's Ear. There was also a small clump of Honey Fungus.