On May the 7th, I made a very exciting trip to Dale in Dyfed that produced two Greater Pipe Fish of 45 cm (18 in) apiece. 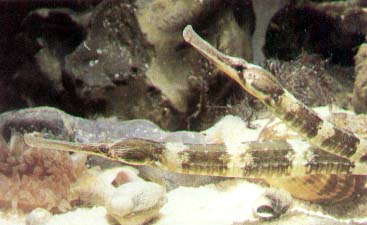 These fish were installed into a 4 ft. tank in my lounge that was fortunately unoccupied at that time.  One fish was light fawn in colour, the other one was a dark brown but definitely both the same species Syngnathus acus.

Having only handled the Snake Pipe Fish, Entelurus Aequoreus, before, I was very taken with the much thicker and almost square body of this fish.  It is also bony and much more rigid than the smooth and supple snake pipe fish.  The sexes of these fish were unknown when caught, but by the end of May it was becoming apparent that I had two male fish and both now heavy with eggs/young in the belly pouches.  The belly pouches are 15 cm (6 in) long, formed of two folds of skin, normally a tightly closed groove, but now very swollen on both sides - altering the squareness of the body.

When Mum was Dad

The young were visible as dark blobs seen through the skin of the pouch and now I was excitedly awaiting the big day. It was May 27th when I spotted the first baby, a 18 mm perfect miniature of the parents.  The baby is thinner than a piece of cotton but, as I observed, they fill out to cotton size over the first week.  During the days of the 27th and 28th May the tank was filling with babies and I was able to watch the odd one being "born", or perhaps expelled from the belly pouch would be a more accurate description.  It is difficult to say how many babies there are, but I will make a conservative guess at fifty.

I have been feeding the parents on live mysid shrimps and I am now adding newly hatched brine shrimps for the babies, that are being taken steadily.  I have watched the babies gradually growing stronger and bigger with "once a day" feeds of N.H.B. Shrimp.  After thirteen days the babies attained a length of 56 mm  (double their birth size and girth) but I will refer to them as the "Leaders" from this point, because I have only now realized that I have some 18 mm "thinner than cotton" babies in amongst the throng, which means that the births were not all over in two days but continued at a rate of one or two per day over a two week period, although the belly region of both adults shrunk back and appeared to be empty.
This means, of course, that I now have about 75 babies of all sizes from 25 mm (1 in) to the leaders on June 16th at 55 mm and quite cheeky as well.

In the middle of the 1992 early heat wave, my house tank has touched 240C, but will all windows and door open most of the time I am holding to 170C to 190C.  I have noticed a behaviour pattern only visible to aquarists like ourselves.  As I stated earlier, I feed some live mysid Shrimps for the adult fish, but I have observed three or four of the 60 mm young stalking and following a mysid across the tank.

At first I thought - No, they can't be thinking of trying to eat the mysid which would be two or three times their body bulk, but they were attacking the mysid nevertheless.  All four babies approached in formation from underneath the belly of the mysid and attacked the area between its legs - presumably after the eggs it must have been carrying there, as is the habit of full size shrimps and prawns.  The mysid did not appreciate the attack but was not harmed in itself of course - until eaten three seconds later by the adult Pipe Fish!
This action of going for the hiding area of the mysid seems to be a regular habit with them all once they reach 50 mm in size.

During June and July the babies have continued to grow but at a slower rate.  They are now 75 mm but as they will only take live food, and as I am unable to supply the amounts and correct size of food now for 80 babies, I will keep one dozen and return the majority plus the parents to a suitable site on the Gower coast.  I say the parents as well, because even in a 4 ft tank, the adults do not have sufficient swimming space to live a healthy life.

During the Autumn of 1993 about 20 young pipefish were given to various aquarists In Wales and 14 were transferred to my 6 ft (2 metre) tank in my garage. 35 at a size of 15-18 cm were released into the sea at Mumbles Head. These fish are not common in the Swansea/Gower area, so perhaps I can now make a very small contribution to the Gower Marine Wildlife.

Most aquarists will use either an aquarium heater or supplementary tungsten lighting magnified through the cover glass. For most species, aim for a minimum temperature of 70C.

Some notes on the young when they leave the pouch (Link)