21 November 2006
A Marmalade Hoverfly, Episyrphus balteatus, was spotted on a remaining Greater Knapweed flower on the Pixie Path to Mill Hill.

23 October 2006
A single hoverfly Rhingia campestris landed on a dead leaf on the lower slopes of Mill Hill.

18 October 2006
A medium-sized hoverfly visited a Dandelion near Cuckoo's Corner. It had white vertical stripes on its dark brown thorax and a black and yellow patterned abdomen, so it could be Helophilus sp? but the image was not clear or large enough to be sure of the species.
Enhanced Image 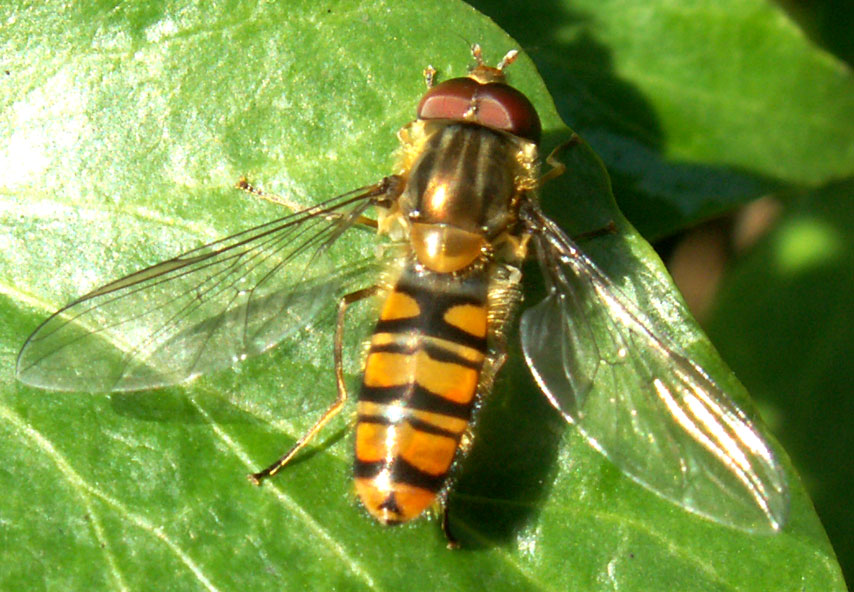 In the sunshine (with strong shadows as the sun was low in the sky), I noticed in passing the occasional Marmalade Hoverflies Episyrphus balteatus and Drone Flies Eristalis mostly in the Butterfly Copse next to the Waterworks Road and on the Pixie Path to Mill Hill. Myathropa florea was noticed in the latter location. Two Greater Knapweed flowers on the path verges attracted one hoverfly which looked very much like a Rhingia, but it flew off too quickly to be sure. This location was next to wear the horse dung is usually piled up, but it was missing this year and there was only one horse in the field.

8 October 2006
There were occasional Marmalade Hoverflies Episyrphus balteatus and Drone Flies Eristalis on the wasteland just outside of Shoreham town, notably the verges of the the Waterworks Road, Old Shoreham.

18 September 2006
There was a hoverfly Rhingia campestris, seen on the Buddleia leaf near next to the cyclepath north of the Cement Works. 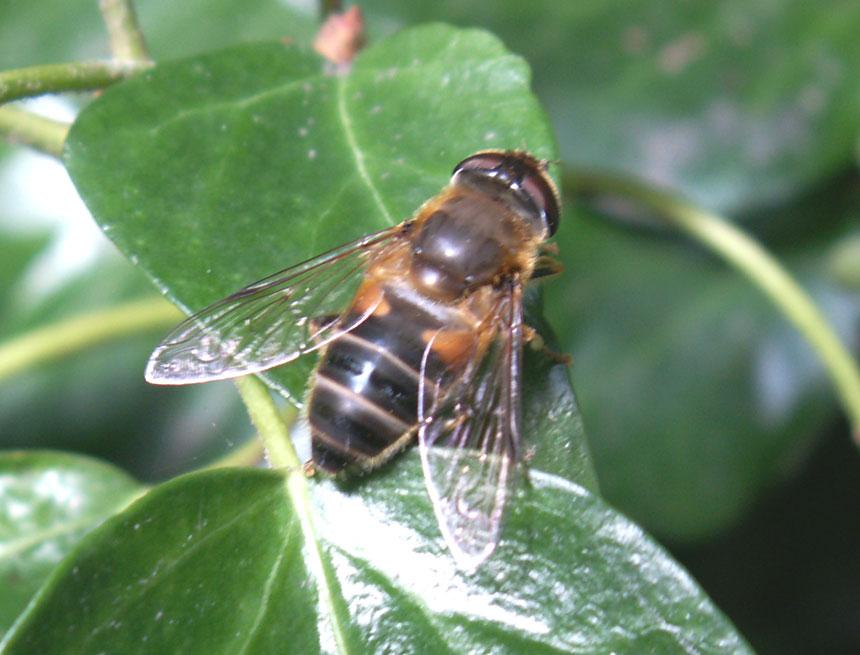 The Ivy in the Butterfly Copse next to the Waterworks Road was covered in flying insects including at least two Volucella zonaria hoverflies, occasional Myathropa florea hoverflies, frequent Drone Flies Eristalis hoverflies, and one or two Eupeodes ? species of hoverflies.

15 September 2006
A Volucella zonaria was spotted on the Ivy in the Butterfly Copse next to the Waterworks Road with Myathropa florea (Occ), Marmalade Hoverflies Episyrphus balteatus (Occ), Drone Flies Eristalis (Freq). There was a Helophilus pendulus hoverfly in a field to the west of Spring Dyke by the Steyning Road.

30 August 2006
One of the spectacular hoverflies Volucella zonaria actually landed on my bicycle tyre as I was wheeled my bike up the Pixie Path to Mill Hill.

6 August 2006
One of the larger orange Volucella hoverflies flew into a spider's orb web in the Hawthorn scrub in the north-west of Mill Hill. When I got closer, it broke free and flew off rapidly. Hoverflies were not being noted but Episyrphus balteatus was common, the small Sphaerophoria scripta frequent, and the widespread Myathropa florea noticed occasionally every day.

On the verges of the Waterworks Road, two small and distinctive flying insects were seen, the first one (left above) near where the private road meets the Steyning Road, and the second wasp (above right) on the path next to Frampton's Field just east of the Butterfly Copse.
Adur Bees & Wasps

A distinctive hoverfly, the bumblebee mimic Volucella bombylans var. plumata was quickly spotted at the western entrance to the Field Maple spinney (called the Maple Spinney) footpath between the Waterworks Road and the Steyning Road.

23 June 2006
Volucella bombylans var. plumata was recorded in the scrub in the north-west part of Mill Hill Nature Reserve. Marmalade Hoverflies, Episyrphus balteatus, were seen frequently. On the south side of the Slonk Hill Cutting there was small yellow-orange hoverfly that would not keep still long enough for a photograph.

15 June 2006
The bumblebee mimic Volucella bombylans var. bombylans with an orange tail was seen along the path that is becoming overgrown with Dogwood in parts in the north-west part of Mill Hill Nature Reserve.

5 June 2006
There were hoverflies including Volucella bombylans var. plumata and Myathropa florea in the Butterfly Copse (TQ 209 063) near the Waterworks Road.

4 June 2006
The hoverfly Merodon equestris was present on the path on the south side of the Slonk Hill Cutting. The hoverfly Volucella bombylans var. bombylans was the only thing of interest in the hopelessly overgrown entrance to Spring Dyke from the Steyning Road.

2 June 2006
A Merodon equestris hoverfly landed repeatedly on the the Pixie Path.

18 May 2006
The hoverfly Myathropa florea was present in the Butterfly Copse (by the Waterworks Road) as is usual every year.

This small hoverfly was recorded on the western part of Anchor Bottom, near Dacre Gardens. It looks like Melanostoma scalare.

This small hoverfly on the reeds in my garden pond needs to be identified. The small size of this hoverfly is misleading. It must be Eupeodes sp., although it much smaller, half the size of normal Eupeodes I have seen. Eupeodes colollae is favourite for the species identification.
ID help by Bastiaan Wakkie on UK Hoverflies
1 May 2006
Sphaerophoria scripta was in Ray Hamblett's garden, the first confirmed one of these common small hoverflies I have seen this year. Rhingia campestris hoverflies were recorded from the lower slopes of Mill Hill. Eupeodes [=Metasyrphus] sp. were recorded from the Pixie Path.

The photographic study shows the Rhingia campestris hoverflies in a north Shoreham garden. The first one is visiting the Spotted Deadnettle, Lamium maculatum, and its long tongue is visible.
Rhingia campestris Study

29 April 2006
At the top of The Drive, hoverflies were frequent including the first Helophilus pendulus of the year. Syrphus hoverflies seem to come in two different sizes, small (these are probably Eupeodes [=Metasyrphus]) and medium. Eristalis tenax were occasionally seen.

There were two small species that have not yet been identified to genus level. The one in the photographs above are under identification investigation. I am beginning with the Platycheirus genus. My determination was the species Platycheirus scutatus. The consensus is that it was Platycheirus albimanus. It is a species very frequently seen. Note that the antennae are black in this small hoverfly. The scutellum is dark brown/black as well.
Enlarged Images
Entomology Glossary

Postscript:
This is a Platycheirus scutatus, almost certainly sensu stricto (as opposed to P. splendidus etc). It was quite common at Poverty Bottom, Sussex.

Rhingia were present but not as many as the dozen or so in a north Shoreham garden visiting Spotted Deadnettle, Lamium maculatum (pic).

Rhingia campestris hoverflies were frequent and preferred the Green Alkanet to the White Dead-nettle on the Waterworks Road and were also present in a Shoreham garden visiting Spotted Deadnettle, Lamium maculatum (pic). Medium-sized Syrphus hoverflies were frequent on wasteland and in gardens everywhere as well as Eristalis sp.
21 April 2006
Medium-sized Syrphus hoverflies were at the top of The Drive, Shoreham, with a very small black stripy hoverfly was there and visiting gardenflowers as well. The latter species was common but yet photographed or identified.
19 April 2006
Attracted to the Willow catkins in the pond on the approaches to Lancing College, a handful of very small hoverflies, probably the same species, one with an orange and black thorax escaped identification, but are noted for subsequent years. It was Melanostoma scalare. They are illustrated below. The species on the catkin was a different hoverfly, although it is likely to be the same species?

A series of two Melanostoma scalare males and one female.
Identification by Andre on the Diptera Forum
1 April 2006
At the top of McIntyre's Field (east of Lancing Clump) a single medium-sized Syrphus hoverfly was spotted on a sun bathed leaf.
4 March 2006
My first hoverfly of the year was one of the small ones that flew slowly under the warm sun and landed on a Firethorn in a Shoreham garden near Buckingham Park. I had a good look through a magnifying glass and it was possibly a Melanostoma. This small hoverfly had a black and yellow abdomen. However, the Melanostoma hoverflies usually cease in November so unless it is an overwintering fly, it may be another species, perhaps a Platycheirus?
5 February 2006
Two Marmalade Hoverflies, Episyrphus balteatus, made its first appearance of the year in my south Lancing garden, (TQ 186 044). They were were attracted by the flowers of this Christmas Box, Sarcococca humilis, and also a pot of flowering yellow Crocus.
Report by Ray Hamblett on Lancing Nature Notes 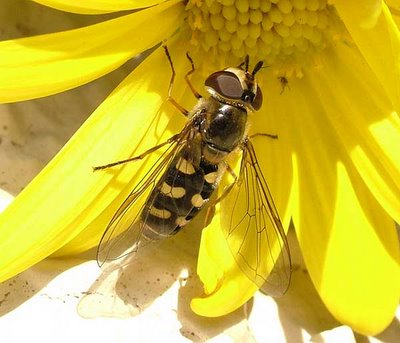 23 January 2006
My first sighting of a hoverfly of 2006 was a female Eupeodes luniger. In my south Lancing front garden, (TQ 186 044). I have a large flowering South African perennial Euryops pectinatus, the daisy flowers provide a useful food source when little else is available. The day was sunny and ambient air temperature was around 10° C on the warm, south facing wall. The fly was a little sluggish and spent a few moments warming on the wall before returning to feed.
Report by Ray Hamblett on Lancing Nature Notes and on the UK Hoverflies Yahoo Group
and the Dipterist's General Forum

The World of Syrphidae