Ostensibly a sand and shingle beach, but the sea bed uncovered by the low spring tides in places has a hard bedrock and loose rocks. Surprisingly, some of the less common crabs have been discovered between the tides and two species of sea anemones reach their eastern limit up the English Channel at Lancing. One other small species of sea anemone Diadumene cincta is recorded here and only a few other places around Britain. Offshore it is a breeding area of the small orange fish known as Montagu's Sea Snail, Liparis montagui. 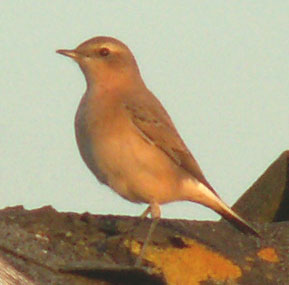 7 September 2006
Plump Wheatears flew from rock groyne to beach hut over the pebbles and the green Orache of Lancing Beach as the tide receded to expose rocks only seen on the equinoctial spring low tides.

A Rabbit under the beach Huts by Lancing Beach Green was seen with healthy eyes and devoid of any illness.

16 July 2006
Above the high water mark the Large White Butterflies were common, seen at a rate of over one a minute from Shoreham Beach all away along to Lancing Beach Green. When I down on the shore rockpooling on the low tide, one Large White Butterfly even flew past my ear.
As it is quite often the case in the middle of summer, the rocks were covered with a variety of seaweeds but the life they supported was rather scanty. I was surprised to discover two Butterfish Pholis gunnellus, under the rocks, most of which were too tightly wedged down to be lifted. The prize find was the occasional Short-legged Spider Crab, Eurynome aspera. An empty Netted Dogwhelk shell was occupied by a young Hermit Crab, Pagurus bernhardus. There at least a handful of the tiny Hooded Shrimp Athanas, less than a handful of Squat Lobsters and Edible Crabs, not many more of the frequent Hairy Crabs and the frequent sea anemones Sargartia troglodytes.

8 June 2006
By Lancing Yacht Club the Mackerel were jumping out of the shallow water and thousands of very small fish from 25 mm long were stranded all over the pebbled beach.

One day later, the junior shrimp net was repaired with a bolt and a wing-nut and there were over a hundred Brown Shrimps off Lancing beach (east Widewater), a handful of South-clawed Hermit Crabs, Diogenes pugilator and a colourful Little Cuttle Sepiola, a small Sand Sole, Pegusa lascaris and flatfish fry. All the Hermit Crabs were occupying Netted Dogwhelk shells. Small shoals of twenty or so Sand-eel fry were seen swimming near the surface. The conditions were perfect with a calm sea, and not too much seaweed.
Intertidal 2006
BMLSS Prawns & Shrimps
BMLSS Cuttlefish

30 May 2006
My junior (metre wide) shrimp net broke under the weight of loose mixed seaweed off Lancing beach (east Widewater) and there were just two Brown Shrimps  and a South-clawed Hermit Crab, Diogenes pugilator, in a Netted Dogwhelk shell.

28 April 2006
Rockpooling on Lancing Beach (by the derelict Mermaid Cafe) produced a poor showing with nothing more than three Butterfish Pholis gunnellus, two Snakelocks Anemones, Anemonia viridis, and the usual dozens of Hairy CrabsPilumnus hirtellus. The sea anemone Sagartia troglodytes was very common (over 500) on the shore.
One of the Herring Gulls seem to have bright orange legs but the glimpse was fleeting.