Photographs and text by Rohan Holt 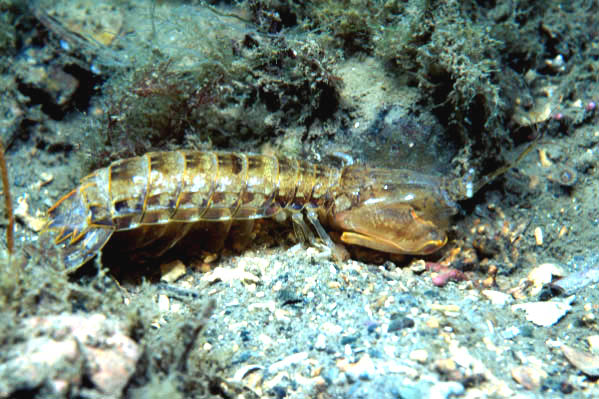 We found an extensive bed of Rissoides desmaresti in June 1999 off Pwllheli/Abersoch during some of our SAC monitoring surveys - it was one of the first diver-observed beds in the UK. The bed was estimated to cover 62 acres at  the north end of Cardigan Bay.  There are dense concentrations of them off the east side of the East St Tudwall Island just off Abersoch. We also found them off Pwllheli.

Not in the Books

In view of the large numbers that we discovered, it was surprising to note they are not listed in any of the identification guides as a British species. 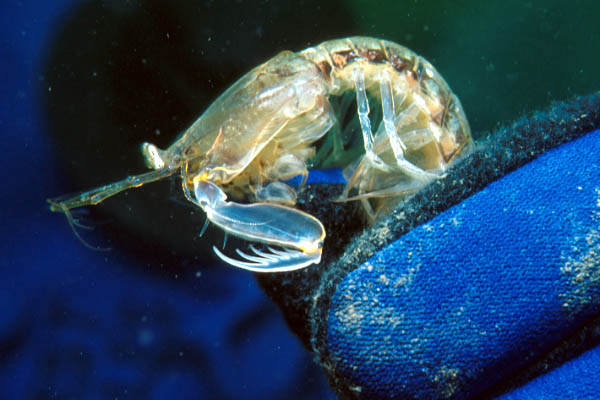 From evidence of plankton trawls of the larvae, Rissoides desmaresti occurs sporadically around the British coast. However, before this bed was discovered there was not a single confirmed report of the adults. Moderate numbers of larvae have been found in the planktonic stage, enough to constitute a British species but not enough for the identification guides. There is  possibly a population of them somewhere off the Isle of Wight and perhaps around the Plymouth area too (Keith Hiscock mentioned fishermen bringing them ashore in cod stomachs), although I know of no other diver observations from anywhere in the country.

In the densest part of the vast bed, the burrows were easily recognisable and distinguishable from those of the Burrowing Prawn Upogebia. 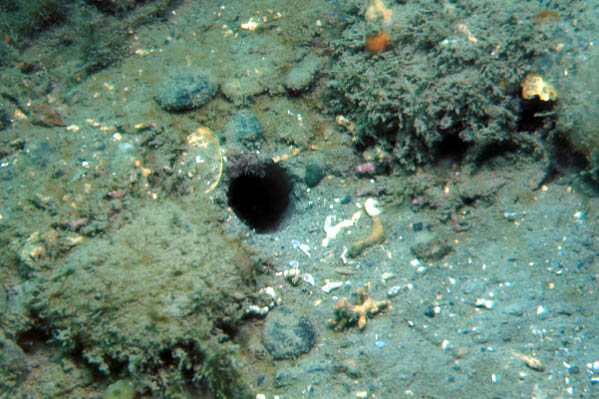 The U-shaped burrows had an entrance about 3 cm across.  The exit to the burrow was much smaller and inconspicuous. It was only noticeable when we tried to catch the shrimps, as they use this as an escape route. The bottom of  the 'U' flattened off about 15 cm below the surface. The burrows were at a depth of about 8-15 metres below Chart Datum, in sediment comprising of muddy shelly gravel and sand with a sparse scattering of maerl and whole shells.

By approaching the burrows very carefully you occasionally get a glimpse of the Mantis Shrimp sitting a few centimetres down its burrow.  Catching them can be a painful experience - not only is the front end particularly well armed (they have a single serrated digit similar to a preying mantis) but the telson is also heavily spined and they use this to stab you repeatedly in the fingers!

Although the report of the Mantis Shrimps actually dated from June 1999, this report was so unusual that I did not include it immediately in this newsletter or the Torpedo Electronic Bulletins.  AH.

The identification by Rohan Holt was confirmed by Roger Bamber.

11 February 2016
A 12 cm long Mantis Shrimp, Rissoides desmaresti, was washed ashore on the Kent coast. This is the first known record from Kent. The discovery was made at Greatstone on the English Channel coast. 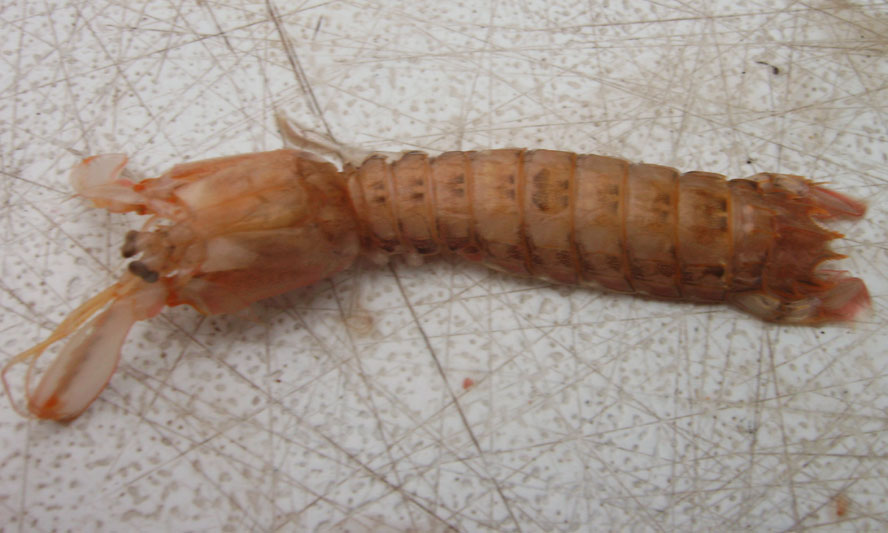 A Mantis Shrimp, Rissoides desmaresti, and a Small-headed Clingfish, Apletodon dentatus, were also discovered in the stomach of a Whiting caught off Brighton, Sussex.
Full Report & Photographs

In April 2000, Bernard Roberts on the fishing vessel "Avanti" reported Dogfish, Scyliorhinus canicula, eating a couple of Mantis Shrimps one mile east of Pwllheli Harbour.  July 2000
Just returned from a resin casting trip - got 5 good casts that show how the burrows are shaped.
Elongated U shaped as suspected, going down no more than about 15 cm and fairly uniform throughout (about 2.5 cm diam).  However, all casts show a distinct constriction around about the mid-point of the burrow where the
diameter reduces to about 1.5 cm.  Is this a common burrowing shrimp/mantis shrimp feature?????  Pics of the casts will be ready soonish.
All the best
Rohan Mauchline's (1984) "Euphausiid, Stomatopod, and Leptostracan Crustaceans" in the SYNOPSES OF THE BRITISH FAUNA (NEW SERIES) no. 30, contains several localities for R. desmaresti, albeit under the old name Meiosquilla
desmaresti. (from Frederik R. Schram, Professor of Systematics and Zoogeography Zoological Museum, University of Amsterdam)
Trevor Bull reported trawling large amounts of Mantis shrimps, Rissoides desmaresti,  circa 1984-85 in the Plemont deep (NW Jersey coast), also large amounts of very small spider crabs, Maja squinado (body the size of a golfball.
He also found a few two miles north of Les Bouefs (tower several miles to the SE of Jersey).
Les Bouefs is reputed to be the site where one crossed to France across a plank, before the sea level rose.
June 2001
A Mantis Shrimp, Rissoides desmaresti, has been found in Lyme Bay.  The specimen was captured by a local fishermen in a trawl net. The specimen was around 85 mm and was captured with a good haul of cod which were feeding upon the mantis shrimps.
Report by Chris Davis (Devon Wildlife Trust) 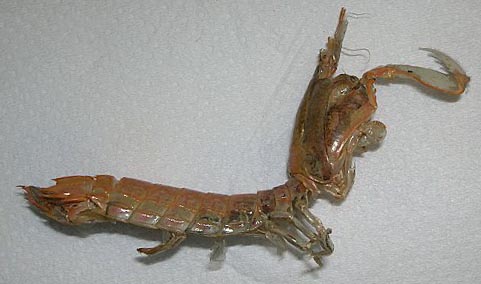 9 February 2002
After a week of gales, the Mantis Shrimp illustrated  was discovered on the tideline at Calshot Spit, Hampshire. It is probably Rissoides desmaresti.