Mill Hill and its Butterflies
by Andy Horton

Mill Hill Local Nature Reserve is situated on the chalk downs north of Shoreham with  splendid views over the Adur valley. It is visited by dog walkers, ramblers and people enjoying the view, but there are lesser known aspects of the hill, its natural wildlife and an unusual story about the Chalkhill Blue Butterfly.

Historically, Mill Hill was the second most important site for the Chalkhill Blue Butterfly in the whole of England. Alas, with modern agricultural practices most of the original chalkhill downland with special herbs has now disappeared. The most important herb is a small yellow legume called the Horseshoe Vetch which is toxic to most living organisms but its leaves are eaten as the only food plant of the Chalkhill Blue and Adonis Blue Butterflies.

Early in the last century this herb could be found in large swathes of the downs, but it is now restricted to small pockets, and one of the largest of these are the five acres of the lower slopes of Mill Hill. This small herb only grows on low fertility chalk downs, chalk pits, wasteland and road embankments.  It flowers in profusion on Mill Hill during the month of May where it can be seen from miles away.

The Chalkhill Butterfly has one brood every year and the blue male emerges in mid-July, followed by the brown female about a week later. At the end of the July and beginning of August, in a good year (the last was 2003) the whole downs can become alive with blue butterflies so it appears impossible to walk on the springy turf without stepping on them. The actual numbers are about 750 to an acre on Mill Hill in 2003, but much less in subsequent years.


The most unusual part of the story is that from the early 19th century to the 1950s there was a craze for butterfly collecting including a search for unusual forms of the Chalkhill Blue which were killed and pinned and are now in the large Cockayne Collection now at the Natural History Museum in London. The story is documented on a CD-ROM by Colin Pratt.

Mill Hill hosts 33 species of butterfly, some like the Common Blue, Brown Argus, Small Heath and Dingy Skipper are downland specialists. Others like the Wall Brown, Grizzled Skipper, Small Skipper, the Small Blue, Small Copper, the common Meadow Brown and Marbled White favour the downs but are found on wasteland elsewhere, whilst the most colourful butterflies seen are locals or immigrant butterflies like the Painted Lady that will visit the downland flowers for nectar. Woodland butterflies like the widespread Speckled Wood inhabit the Hawthorn scrub on Mill Hill.

What makes Mill Hill so important for the blue butterflies? The answer lies in the very special nature of the low fertility chalk soil, undisturbed by the ravages of ploughing and heavy grazing. The small downland herbs lose out to larger common opportunist weeds in rich soil. This fragile environment at Mill Hill is unique because historically it was managed as an unimproved rabbit warren and taken in public ownership before World War II. Many of our Nature Reserves are like that, presented to the nation because the land was infertile uneconomic and unsuitable for agriculture.

What does the future hold for Mill Hill and its butterflies? The answer is that it is up to man. The downs are a man managed environment and has been for two millennia. Left to nature the land would quickly revert to woodland by a process called ecological succession. Woody hedgerow shrubs like Privet, Brambles and Hawthorn would rapidly invade the downland and shade out the small herbs and then without their food plants the butterflies would be eliminated.  This has already happened in my lifetime with six acres completely lost to a Sycamore wood.

In the past the land owners or commoners would use the wood for fuel, but in modern times it is a cost to maintain the Nature Reserve. On Mill Hill, it is Privet that is the main invader and this needs to be removed by professionals. If it is not removed the butterfly site will be destroyed in just a few years.

A list of the Flora of Shoreham-by-Sea including Mill Hill has been compiled by Betty Bishop.


In the last good year in 2003 the numbers of Chalkhill Blue Butterflies recorded were: 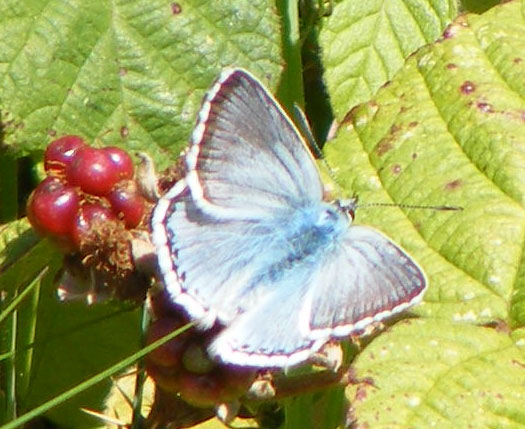