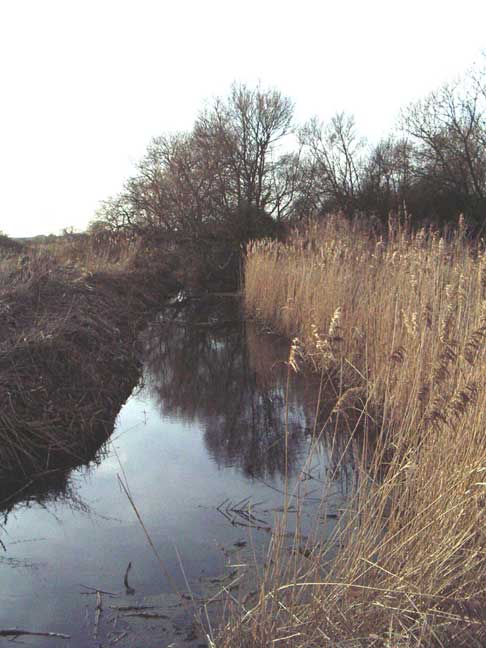 3 September 2004
The handsome dark blue of a Migrant Hawker Dragonfly was seen on New Monks Farm behind the Withy Patch.

11 August 2004
A large blue dragonfly was hawking over the Willow Tree area (behind the Withy Patch) of New Monks Farm, Lancing. At first I thought it was an Emperor Dragonfly because of its size, but the markings were more black than blue, so I think this must be a Migrant Hawker, Aeshna mixta.
Adur Damselflies and Dragonflies
The photograph on the right is a willow gall produced by the Pontamia species of sawfly.

16 June 2004
Just two definite reddish Small Tortoiseshell Butterflies on New Monks Farm to the south-east of the weighbridge and a possible Small Skipper.

24 April 2004
I flushed a couple of Common Partridges hiding up in some cleared trees on New Monks Farm adjacent to the private road on the western edge of this large wasted area. The birds, which were distinctly red, flew off rapidly towards the east.
There were shoals of tiny sticklebacks in the stream that runs along the eastern side of the road. The nettle-like plant the Gypsywort was prominent sticking up out of the shallow water.

21 April 2004
In the woody stroud near the Withy Patch, the water plants push their way above the surface or become exposed as the stream recedes:

Link to image of the stream in flood


Click on the images for an enlarged view. These plants await confirmation of their identity. They will all grow in water, but as this stream reduces to a trickle in summer, although remaining damp and boggy, these are more like marsh plants than submerged water plants.

13 April 2004
A Long-tailed Tit in a bright plumage flew a metre or so in front of me and then landed in a bush at the entrance of the layby near Withy Patch, Lancing. I usually think of this tiny bird as one in small flocks of a dozen or more birds in winter only as I have not seen signs of their large nests in local trees. Fifteen minutes later I spotted the sihouette of another one flying between the bushes south-west of Old Shoreham Toll Bridge.
Adur Levels

29 January 2004
At the Withy Patch there was a small chirm of about five Goldfinches and other birds singing in the bushes in the late afternoon.
A Barn Owl flew in the early morning light (7:20 am) over New Monks Farm, Lancing, near the Withy Patch layby.

Owl Report by Richard Ives on Sussex Ornithological Society News
NB: There have been several reports of this bird from different observers and it appears to be a regular at dawn and dusk. (It was seen again by Richard Ives on 9 February 2004.)


6 January 2004
In the stroud by the Withy Patch, New Monks Farm, Lancing, the Jew's Ear Fungus, Hirneola auricola-judae, was beginning to turn gooey.

There was another white fungus or lichen on the trunk of a living tree amongst the prevalent rotten wood.
Fungi of Lancing (by Ray Hamblett)