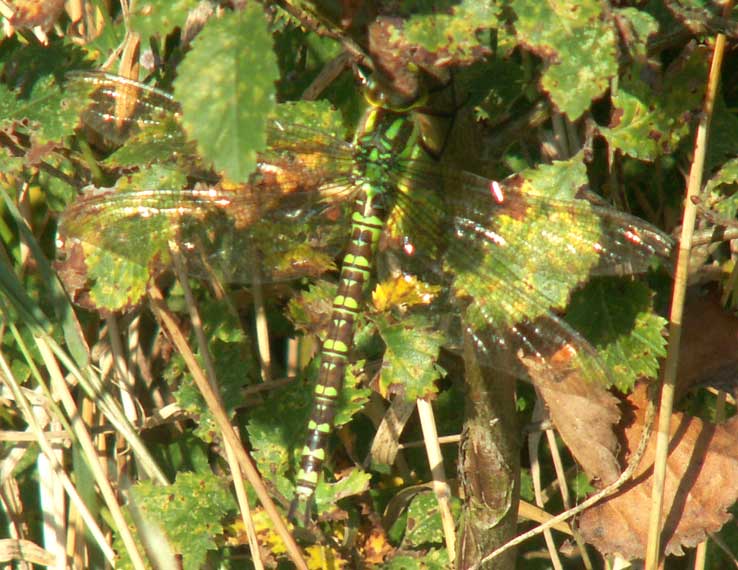 6 September 2005
A Partridge took flight and a male Southern Hawker Dragonfly settled by the southern entrance to the Elm Corridor on New Monks Farm. The patterns on this predatory dragonfly merge well with the background vegetation.
Adur Damselflies and Dragonflies

1 August 2005
In the damp shade of the Elm Corridor on New Monks Farm, flying insects included the predatory Southern Hawker Dragonfly and at least six species of hoverflies, including the spectacular Volucella zonaria, the black and yellow Chrysotoxum bicinctum, the common Episyrphus balteatus, and other familiar species like Myathropa florea and the small Sphaerophoria scripta.  A specimen of Volucella inanis (a similar species to Volucella zonaria) was confirmed by a photograph (but not until 17 August 2005)..
Adur Hoverflies

Butterflies included 20+ Green-veined White Butterflies, 12+ Speckled Wood Butterflies, a dozen Gatekeepers, handful of Meadow Browns and a Red Admiral.
There were lots of smaller flies and there seems to be a variety in the Elm corridor area. It is possible that the elms are the attractant, but in this case, I think other plants were responsible.
Images of some of these Flies

Swallows swooped low of the field of Oil Seed Rape and forty Wood Pigeons rose in unison at my approach.

9 July 2005
A sighting of the spectacular hoverfly Volucella zonaria over New Monks Farm, Lancing, was the first of the year.
Adur Hoverflies
A handful of Swifts were flying over Lancing. 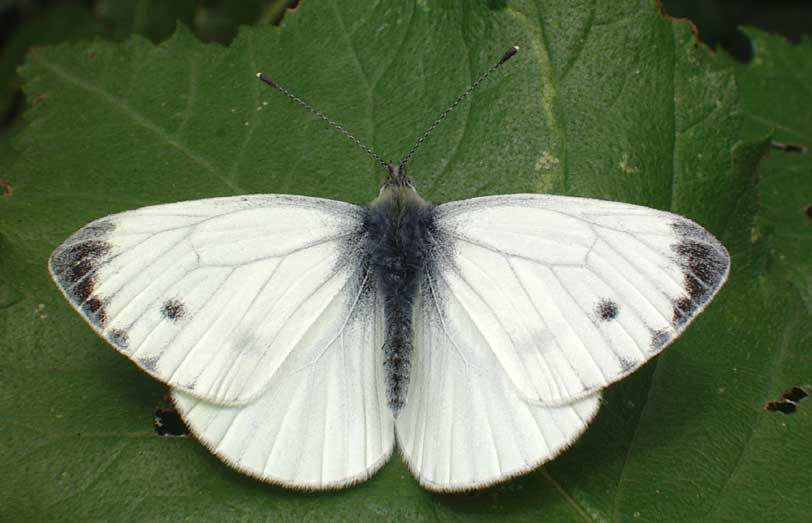 There were one or two Small White Butterflies that settled, but by far the most, over fifty were more restless white butterflies with strong black markings on their wing-tips. The four that settled all proved to be Green-veined Whites. Large Whites may have occurred but they could not be identified positively, although one was almost certain.
Other butterflies present in the Elm Corridor were a handful of confirmed Large Skippers, about a dozen confirmed Small Skippers, 20+ Meadow Browns, 15+ Gatekeepers, a Comma, and two faded Speckled Wood Butterflies. The four red moths were Burnets and I think they were 6-spot Burnets, but I am not sure.
Adur Butterfly & Large Moth List 2005

23 June 2005
There were a pair of unidentified skippers courting or sparring and one Small Tortoiseshell Butterfly in the field next to Withy Path on New Monks Farm.
Adur Butterfly List 2005

13 June 2005
On the western perimeter of the wild land adjacent to the Withy Patch (down the private road), a male Pheasant took of in a whirring flight as a Rabbit was in the road and moments later a Roe Deer (without antlers) leapt into cover and a Wood Pigeon simultaneously took flight; and I did not shoot any of them with my camera.
There was a Speckled Wood Butterfly as well. The route through the oil seed rape field to Mash Barn was a difficult unproductive passage and Mash Barn Lane was impossible like a jungle where I saw a Magpie Moth.
Adur Butterfly & Large Moth List 2005

29 May 2005
Butterflies were on show in Mash Barn Lane, Lancing, where the first Brown Argus Butterfly of the year made an appearance with a male Common Blue Butterfly. The two butterflies were clearly aware of each other as they frequently met for a brief sparring bout. This raises an identification problem as the female Common Blues are very similar to the Brown Argus. This is the first May record for the Brown Argus on these Adur Nature Notes pages.

In Mash Barn Lane. Lancing, I finally followed a Orange-tip Butterfly that settled on a Cow Parsley where it was camouflaged so as to be almost invisible. Alas, the sun was behind the clouds on the mostly overcast day and it was still tricky photography because the Cow Parsley was blowing about in the breeze in the middle of a Stinging Nettle patch. When tickled, the butterfly flew off and it was too muddy after two days of rain to follow it. Green-veined White Butterflies (at least one) were seen in the Mash Barn Path which is overgrown so the passage means getting soaked in wet Cow Parsley and stung by nettles and the risk of falling over discarded junk. The first butterfly seen was a Speckled Wood.
Adur Butterfly List 2005 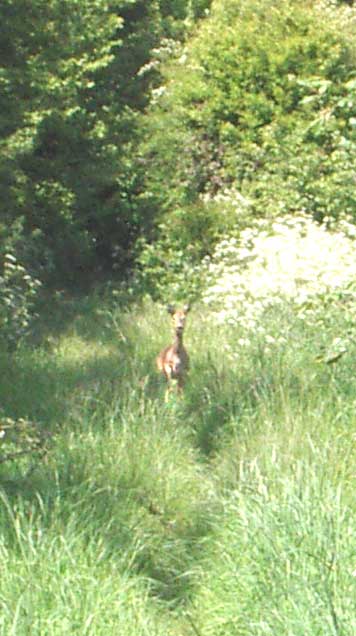 18 May 2005
Passage along the Elm avenue on New Monks Farm was interrupted in a head on confrontation with a Roe Deer wanting to proceed in my direction. After attempting to intimidate me from a distance of 50 metres or so, it veered of after 20 seconds. I nearly trod on a Common Partridge before it flew off suddenly. At the Mash Barn Lane end I saw my first blue damselfly of the year. It was probably an Azure Damselfly. The hoverfly Volucella bombylans var. plumata was seen at the same time.
There were at least four Orange-tip Butterflies, three males, a confirmed Green-veined White Butterfly and one Red Admiral.

10 May 2005
An adult Slow Worm in Mash Barn Lane measured 24 cm long and it appeared to have a newly grown tail.

A pristine Red Admiral Butterfly chasing a settled Orange-tip Butterfly off a Cow Parsley plant was an interaction I had not seen before, in the avenue of Elms in the centre of New Monks Farm. By necessity the visit had to be a fleeting passing one with a one to three Holly Blues seen, a handful of good condition Speckled Wood Butterflies, some definite Large Whites, and about ten other white butterflies, but a Green-veined White was not confirmed.
Adur Butterfly List 2005
Elm ID Guide
There were at least five of the kleptoparastic (cuckoo) bees Nomada fucata in two minutes but only one of its victim the mining bee Andrena flavipes seen amongst the Elm leaves. There were a few hoverflies and handful of bumblebees and scores of other flies.
Adur Bees
Noticeable plants in flower included Common Vetch and Common Mouse-ear.

9 May 2005
While trying to discover the species of a line of Elm trees down the Mash Barn Lane I found I was accompanied by a Red Admiral Butterfly. Poised on the flower of a two metre high Cow Parsley plant it held an almost aggressive pose as I photographed it. 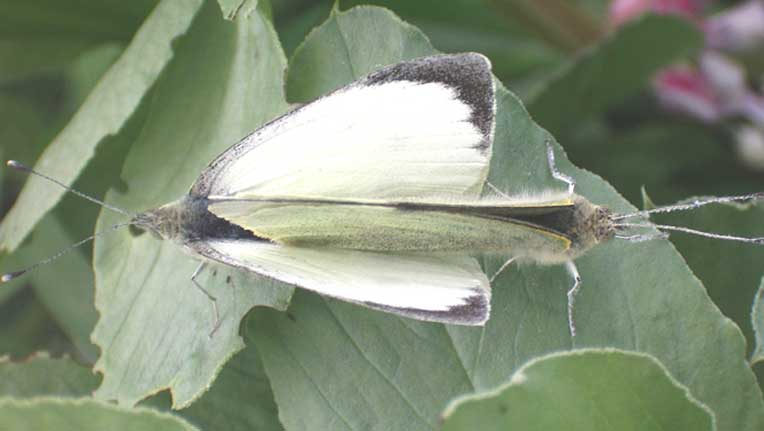 7 May 2005
Passage  (by bicycle) through New Monks Farm, Lancing, skirting the Oil Seed Rape field and a subsequent stroll down Mash Barn Lane (stroll with Ray Hamblett) produced the following butterflies: Orange-tips 4+, Green-veined Whites 20+, Small Whites 12+, Large Whites 15+, Holly Blues 25+, Speckled Woods 25+ and Peacock Butterflies 1. Large Whites were observed mating on a Broad Bean plant. Cow Parsley was a prominent plant in the lane and in front of the hedgerows. A single plant of Garlic Mustard was also recorded as well as a large clump of Herb Robert, and Woundwort which hosted their own Shield Bugs.

The bee in the first pictures is Nomada fucata, a parasite of the mining bee Andrena flavipes, in second photograph from the left, which was discovered within a metre of the first bee. Nomada fucata is now widely recorded from southern England. The Nomada bee was first spotted by Ray Hamblett. 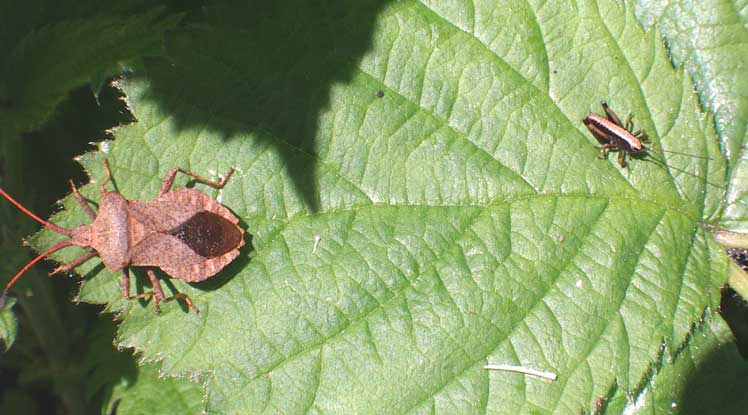 The 14 spot Ladybird, Propylea quattuordecimpunctata, was present and about half a dozen were seen. There were likely to be more of this very small beetle. There were dozens of the common hoverflies including Erastalis tenax and a species of Syrphus.
Lancing Beetle Gallery (by Ray Hamblett)

25 April 2005
I made the trek in very muddy conditions after the overnight rain (15 mm) from Mash Barn Lane to the Railway Crossing and to New Monks Farm. There were numerous (20+) adult elms and saplings in the tree corridor from the Horse Paddock to the Farm Houses. However, there was very little flying insect life observed amongst the damp foliage. The species of elm is still under enquiry. There may be two species or a hybrid species. It appears that the Wych Elm, Ulmus glabra, is the most prevalent.

Elms,  and other trees (centre) 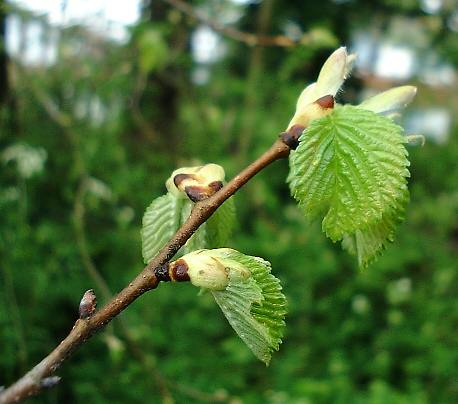 
24 April 2005
An Orange Ladybird, Halyzia sedecimguttata with notable other insects like hoverflies were spotted on a Bramble leaf in Mash Barn Lane, Lancing.
Full Report

21 April 2005
I the length of the Mash Barn Lane path leading to New Monks Farm and on into the Oil Seed Rape field.
On the way I found many insects and spiders. Among them were Speckled Wood, Small Tortoiseshell, Holly Blue and Brimstone Butterflies, Several species of hoverfly including Syrphus, male and female Large Red Damselflies, Red-tailed Bumbelebees, a Squash Bug and a Nursery Web Spider Pisaura mirabilis showed. 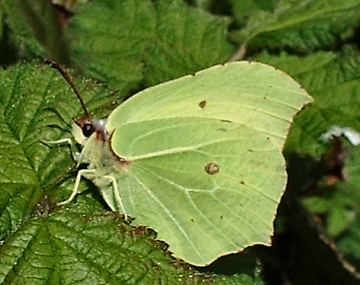 19 April 2005
I have hoped to see my first Orange Tip Butterflies of the year locally and I did not have to go further than Mash Barn Lane leading to New Monks Farm, Lancing. I found one flying among the drifts of Cow Parsley and occasional Honesty plants. Further on two Speckled Woods were seen in a courtship dance, then a Holly Blue flew past me. On a Bramble leaf a Comma paused until I drew close. At the end of the 400 metre lane a pair of Small Whites fluttered over the Nettles.