Sometimes the most obvious factor is overlooked when deciding on a maintenance programme for the aquarium, troubleshooting for the cause of fish deaths, or deciding which method of biological filtration to employ. All organisms need oxygen in order to survive. Sensitive marine fish and invertebrates will quickly die when the amount of dissolved oxygen in the water falls below the limit for that particular creature.

If the oxygen content of the water is too low, the fish will demonstrate symptoms, frequently gasping at the water surface, or trying to jump out of the tank. This is called the 'Escape response', and is simply a desire to swim into more favourable waters, which would be possible in the sea. The response will also occur in other unsuitable conditions like reduced salinity, excessively high temperatures, and ammonia-polluted waters.

Several important points are often lost in a wealth of technical information in the more popular fishkeeping texts. They are:

1) As the temperature rises the oxygen content of the water decreases. The saturation level of dissolved oxygen at different temperatures is shown in Table 1.
2) Fish have varying abilities to tolerate reduced oxygen levels, larger fast moving fish are generally less adaptive than sedentary shore dwelling species. Many invertebrates can tolerate lower oxygen levels than fish.
3) Oxygen enters the aquarium at the surface of the water, from the surrounding air.
4) Consumption of oxygen by bacteria is an important limiting factor for stocking levels, using up 30 times as much oxygen per body weight as fish.
5) Rotting waste produces hydrogen sulphide (H2S) which will be oxidised in healthy aquariums.
6) Aquariums inevitably become 'eutrophic' with age. The end products of the 'Nitrogen Cycle', the nutrients provide sustenance for growths of algae, and a combination of events leading to an increase in organic wastes.
7) The 'biomass' of the aquarium increases with the length of time the aquarium has been established.

The figures are for 100% and 70% saturation levels of dissolved oxygen. Oxygen enters the aquarium at the surface and in properly aerated aquaria near 100% saturation levels should be achieved. Oxygen entering the water from the atmosphere is a relatively slow process because it is difficult to dissolve in water, compared to other gases like carbon dioxide.
Higher amounts of dissolved oxygen are found in freshwater. 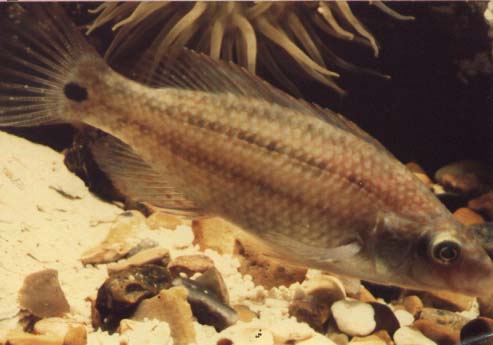 These variations in temperature are particularly important to the coldwater marine aquarist, keeping Lusitanian and Eastern Atlantic Temperate species in uncooled aquaria. Even if the fish are known to survive in the higher temperatures e.g. Corkwing Wrasse, Crenilabrus melops, the increase in temperature that is likely to occur with the onset of the warmer weather in the early Summer can pose problems. This is compounded by the increased food demands of the fish, which result in an increased nitrogen input, and a dramatic increase in the oxygen-consuming bacteria. Also, the increased metabolism of fish during hot temperatures requires a larger oxygen intake. Suddenly, an aquarium that has functioned successfully throughout the Winter months, is overstocked.

Figures of the amount of dissolved oxygen required by each specie is difficult to obtain. Some fish are known to face problems when the oxygen content of the water falls below 5 mg/l.
By consulting the table, it can be seen that just as the temperature of the water rises to the point when the British sea fish begin to experience stress, the amount of oxygen available is also falling to a critical level. At this point, a heavy feed, or the death of a prawn or small fish can rapidly propel the aquarium water into a toxic state, with a heavy death toll.
The oxygen requirements of each fish have significance in the distribution of the species in the seas and oceans. As a general guide, the following factors can be taken into account:

a) Larger fish require more oxygen than smaller fish
b) Fish found regularly in rock pools often have evolved a respiratory system to cope with low oxygen levels
c) Free-swimming oceanic and offshore fish require higher oxygen levels than sedentary bottom-dwelling fish
d) Fish from northern waters (Arctic-boreal) seem to be less tolerant of reduced oxygen levels.
Species and, even individual fish, vary considerably in their environmental needs.
Generally, the oxygen requirements of invertebrates are less demanding than fish. Crabs and prawns have been known to expire under exceptional conditions. e.g. a pump break-down at 28ºC.

Air contains much more oxygen than water, as much as 30 times the content. In the sea, the tides and waves continually keep the waters in motion, the air entering at the air-water surface interface. The main function of aeration in the aquaria is to encourage the interchange of oxygen in the atmosphere to enter the aquarium water at the surface. The greater the surface area of the water, and the more turbulent it is, the greater the exchange of oxygen that occurs. If a properly installed biological filter is operating efficiently, the rapid circulation of water by the Powerheads should ensure a 80% saturation level of dissolved oxygen in the water. Public Aquariums and Sea Life Centres report a near 100% levels of oxygen in the water.

The diaphragm air pump can be fitted with tubing an airstone to produce a glorious array of bubbles. This is useful in mixing the water in the aquarium, but has only a small result on dissolved oxygen levels. If insufficient oxygen is suspected, increase the agitation at the water surface by the use of a variety of devices attached to the Powerheads or external filters, like a spray bar or special turbulence gadget. None of these methods can help with a serious oxygen-deficiency problem, which is a symptom of an overcrowded tank.

The excessive oxygen demands of the nitrifying and other bacteria have led me to rethink some of the old staple rules of basic aquarium keeping; at least, as applicable to keeping British marine life.

After a biological system has been operating continually for several months, the important 'Nitrogen cycle' is only likely to cause a problem with a malfunction of equipment (this is the main virtue of duplicate filtration systems) or when, as often happens, the crabs and rockpool fish dig up the sand and expose the undergravel filter plate, resulting in circulation without filtration. (If you are not careful the more aggressive crabs, especially Cancer pagurus, will dig up the filter plate as well). In my aquaria, ammonia measurements have always recorded as nil, even after a heavy feed, and nitrite levels have never caused any problems. 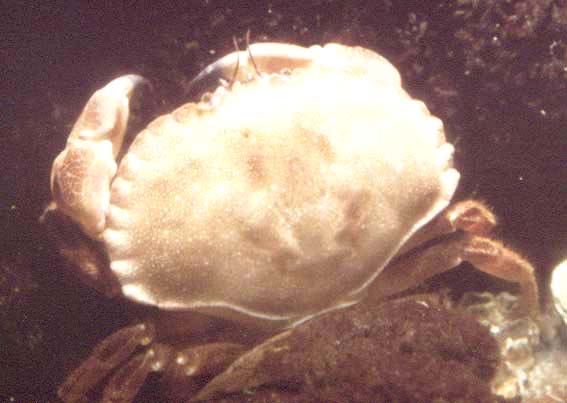 However, the continual input of nitrogen as food results in the accumulation of 'nitrates' which are unlikely to prove dangerous on their own, but the gradual build-up of nutrients in the small confines of an aquarium, acts like the addition of fertiliser. The tank is said to become increasingly 'eutrophic'. The obvious observation is the increase in algae growth in an aquarium, obtaining sustenance from the nutrients. In the sea, under natural sunlight, photosynthesis increases oxygen levels.

However, in the aquarium, without the masses of phytoplankton, and if the algae is scraped off and dies, in addition to copepods and other small organisms and bacteria feeding on the waste, the cumulative effect seems to increase the biomass and the available dissolved oxygen has to be shared by a greater number of animals. For this reason is desirable to remove large amounts of organic waste before it enters the 'Nitrogen cycle', and this can be done by two principal methods of interest to the home aquarist. Organic waste can be adsorbed onto 'activated carbon' (charcoal) housed in granular form inside an external filter. Unfortunately, the adsorptive span tends to be short, although carbon granules will continue to operate as biological attachment sites. The other method to remove organic waste is to use a Protein Skimmer, which is placed inside the aquaria. The smaller makes need a diaphragm air-pump, whilst the larger makes have a built-in pump. This device removes surface-active proteins called surfactants.
Large pieces of organic matter, uneaten food and dead organisms can be removed by hand. The aquarist should note that most of the detritus, or dirt, that accumulates in the substrate has already undergone bacterial action, and its removal is mainly for aesthetic reasons.
And finally, what is meant by the 'biomass'? Quite simply it means all the living organisms in the aquarium. If an expert advises you to reduce the biomass of your aquarium, what he means is that you are overstocked, and you should knock down the wall, and get a bigger tank!

Advanced aquarists are using the recently developed 'Trickle filters' which use air-breathing bacteria in the 'Nitrogen Cycle'.

Oxygen test kits are available from specialist aquarium retailers, the Duplatest kit uses the Winkler method of analysis which produce a final figure in mg/litre (equivalent to ppm.). I was unable to obtain accurate readings, the test is difficult to use. A Merck test kit is also available.
Sea Life Centres and Trout farms use electronic oxygen meters. The more expensive models (over 300) prove to be accurate monitors. I realise that these are beyond the budget of home aquarists, but they be a feasible purchase for the larger Aquarist Societies.


I conclude that at the higher temperatures the margin of error is small, (at 280C , 80% saturation = 5.12 mg/l., and species sensitive to low oxygen levels are likely to expire. Fortunately, rock pool species can tolerate lower levels than the open water and deep sea fish.

Oxygen deficiency is the principal cause of the death of fish on the way home from collecting expeditions on the shore. Three additional tips are likely to increase the success rate:

1) Use of polystyrene containers to keep the water as cool as possible
2) Aeration using tube and airstone attached to a battery operated diaphragm air-pump.
3) Use of freshly mixed and aerated artificial seawater. This is preferred because of the absence of plankton, which in collected seawater is likely to die on the journey home, using up valuable oxygen and releasing ammonia into the water.

Aquarists using 'coolers' will be pleased to know that the Digi-Stat Thermostat manufactured by Rocon is available with reverse logic enabling the unit to be used with a cooling unit. A Power Booster will be necessary if the unit is to be used to switch the 'cooler' on and off. As the 'cooler' has a relatively high power consumption this seems to be the best long term arrangement.

Biochemical Oxygen Demand (BOD) is the amount of oxygen required by the bacteria to break down the organic waste.

(Including brief guidelines for aquarists without a cooler)