Pixie Path 2007 Footpath 3138 approach to Mill Hill from the Waterworks Road. Formerly part of the original Mill Hill, although the horse grazing (Frampton's Field) field was ploughed up in the late fifties. This page will include some reports from the Mill Hill Cutting adjacent to the path when it runs west to east. The path itself has always been a "Right of Way". This is on chalk. There are rabbit burrows undermining the path.

Link to the Pixie Path Reports 2008

11 October 2007
The Long-tailed Tits were most attractive perched on tiny branches swaying with their weight and singing under a clear sky on the Mill Hill Cutting next to the Pixie Path.  A Great Tit was also spotted and a Blue Tit.

3 October 2007
A mixed flock of dozen Long-tailed Tits, Blue Tits, at least one Great Tit and some Greenfinches were a welcome and attractive sight amongst the small bushes on the Mill Hill Cutting next to the Pixie Path. There were about thirty birds seen in a few minutes.

30 September 2007
A Sparrowhawk flew and glided at a low level over the northern part of Frampton's Field, Old Shoreham. A Red Admiral, a Large White and a Speckled Wood Butterfly were seen.
Full Butterfly List 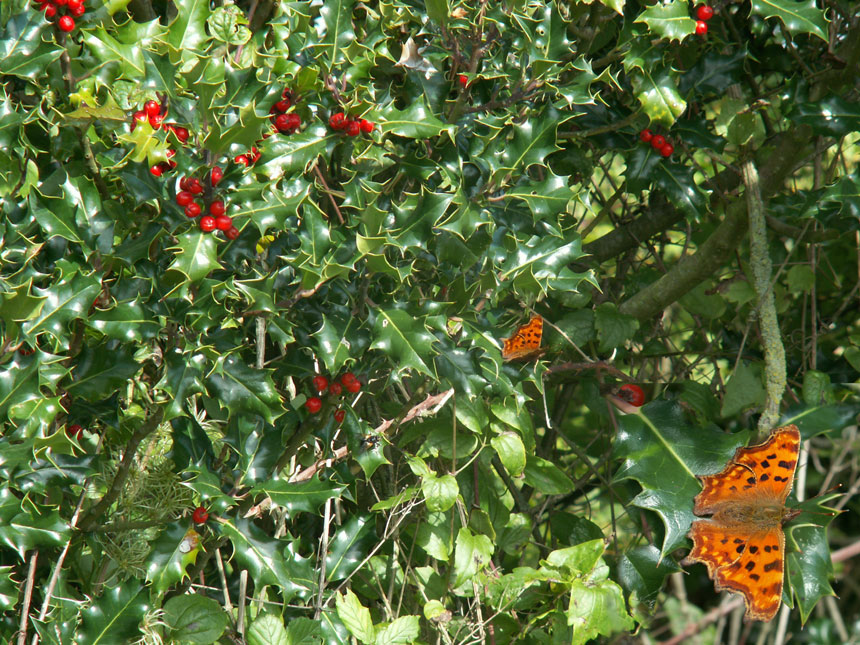 25 September 2007
The Pixie Path hosted at least one Red Admiral andthree Peacock Butterflies. A Clouded Yellow flew over the path from Frampton's Field and away. The white butterfly seen was not positively identified and it seemed like a Green-veined White and the small orange or brown butterfly or moth flitted away too quickly as well. The Holly berries were profuse on one small tree on which a Comma Butterfly settled.
Full Butterfly List

12 September 2007
There were frequent hoverflies on the Ivy by the Pixie Path in the north-west part: Myathropa florea and Drone Flies, Eristalis, and at least one small Sphaerophoria, plus Syrphus and another few of the smaller ones which I did not identify.
It seemed like an exceptionally large Peacock Butterfly that fluttered around the Ivy on the Pixie Path followed by a handful of good condition Red Admirals.
Full Butterfly List

The Pixie Path hosted more than a dozen fresh looking Holly Blue Butterflies of both sexes and occasional Gatekeepers. Yellow Wort and Lesser Centaury were frequently in flower.

25 July 2007
I made an unusual route circling Frampton's Field from the south at the entrance from The Street, recording a few Holly Blues and Red Admirals, a Speckled Wood in the Butterfly Copse, a few Gatekeepers and Meadow Browns and one Small Skipper as the path leads down to the Mill Hill Cutting.

3 July 2007
As an ominous black cloud loomed in the west, I saw my first Small Copper Butterfly of the year and my first of the spectacular hoverflies Volucella zonaria both at the top of the Pixie Path.  Red Bartsia was seen flowering on the edge of the path.
Full Butterfly Report

There were also two fresh looking Comma Butterflies fluttering around the Stinging Nettles at the top of the Pixie Path. Yellow Shell Moths were noticed here as well.
New flowers seen for the first time this year included the first Wild Basil and Nipplewort on the Pixie Path.

22 May 2007
Framptons Field (which was ploughed up in the sixties) is divided up into parcels of land and it is almost an experimental grazing regime with grasses of varying lengths. Herbs and wild plants were low in variety but these was a largish patch of Germander Speedwell in the middle of one of the grazing patches.
A very worn Green-veined White Butterfly visited and early Bramble flower at the top of the Pixie Path.

16 May 2007
Occasional Red Admiral Butterflies were seen on and around the Pixie Path.

27 April 2007
The Pixie Path produced three Red Admirals, at least two Holly Blues. The top of Chanctonbury Drive saw a white butterfly fluttering around which was thought to be a Green-veined White.

The Common Milkwort was flowering frequently on the north edge of Framptons Field between the outer and inner fences but was absent from the middle of the field or from anywhere inside the fences. This cluster was all blue, but there was the pink variety on the path.
The Holly Blue in the central photograph looks like a Common Blue, but its behaviour fluttering around the Ivy and its underside spots when it settled closed confirmed it 100% to be a Holly Blue.
The third insect was seen at the top of the Pixie Path near the demolished stile and before looking it up it looks like some kind of ichneumon wasp. It was spotted whilst looking to photograph a Large Red-tailed Damselfly.
Adur Wasps

15 April 2007
A Holly Blue Butterfly and a Common Lizard were noted on a passage journey. Three Speckled Woods were seen at the top of Chanctonbury Drive (SE of Mill Hill) immediately south of the small spinney over the daisy-covered lawn.
Butterfly Report

12 April 2007
An afternoon passage trip did not register any butterflies, but I did spot a young Common Lizard skittering amongst the Dog Violets on the edge of the path.

2 April 2007
In a breezy Force 5 gusting to Force 6 and more, it was in the brief periods when the wind died down a bit and in shelter that most of the butterflies were seen. The first two were a sparring Peacock Butterfly with a Small White Butterfly onthe Pixie Path (north-west corner), followed by a Small Tortoiseshell Butterfly at the top by the house that flew at about 10 mph west to over the Butterfly Copse (next to the Waterworks Road). The first Dog Violets were seen in flower on the path with the worn Sweet Violets still in flower.
Adur Wild Flowers
Adur Violets

28 March 2007
Four butterflies were seen on the route, the first one, almost certainly a Peacock Butterfly and there was a brown species flying high above the Butterfly Copse which could have been a Comma. A young Common Lizard slithered in the grass on the edge of the path and the extreme north-west corner of Frampton's Field.
Butterfly Report

27 March 2007
In the late afternoon the earlier sunshine had brought out the first Common Lizards, Zootoca vivipara, on lichen-covered chestnut fencing on the Pixie Path to Mill Hill where I also spotted the first local Small White Butterfly of 2007 nectaring on a Dandelion flower. I also spotted a strong flying Peacock Butterfly and an unidentified brown butterfly (originally thought to be a Speckled Wood, later revised to probably a Comma). There were at least half a dozen young healthy Rabbits seen running across the path.

This bumblebee picture confused me at first. It is just one bee on the Pixie Path to Mill Hill. The Queen had a white tail with slight V-shaped black markings and an orange band near its head. My first choice of species was Bombus vestalis, but it it is at least one month too early (by some reports) for this cuckoo bee. The brownish wings were rather distinctive.

19 March 2007
The Pixie Path had been cleared of vegetation, mainly the Alexanders, for the whole of its length. Sweet Violets were in flower on the path. (It was too windy to visit Mill Hill.) The access point from the southern end of Footpath 3138 is under enquiry with West Sussex County Council 'Rights of Way' as the OS and iMaps are not clear.

9 March 2007
A small immigrant alien Harlequin Ladybird, Harmonia axyridis, was spotted on an Alexander leaf on the Pixie Path approach to Mill Hill from the Waterworks Road. (TQ 210 063)
Adur Ladybirds