Scroll down for Clingfish information

The new year of 1997 was heralded in with an exceptionally cold spell, with air temperatures below freezing (down to minus 8 ° C at night). On the 2nd, I took a trip down to Llangenith Beach around midday at low tide. This beach is around 3 miles long and there was a band of frozen sea water up to 25 cm deep for the whole of the length of the beach. The melting point of seawater ice is minus 1.87 ° C. and it will be colder than that before it actually freezes. There were dead Sand Mason Worms, Lanice conchilega, and Razor Shells, Ensis ensis, everywhere.

By the 4th the bitterly cold wind had died down, but it was not until the 10th that I braved a visit to Lydstep Beach, Tenby, with Mike & Gina Batt of 'Silent World' Aquarium, Tenby. The shore fauna was sparse but I discovered Butterfish, Pholis gunnellus; Worm Pipefish, Nerophis lumbriciformis; and a Mermaid's Purse of the Lesser Spotted Dogfish, Scyliorhinus canicucla. The embryo is alive but in poor condition. There were also a few Brittlestars, Ophiothrix fragilis, amongst the rocks and weed, with the permanent residents of the shore including Broad-clawed Porcelain Crabs and small Common Hermit Crabs.

A report of the fauna on the shores around Britain in January 1997 can be found in issue number 1 of the Shorewatch Newsletter, published by the British Marine Life Study Society. 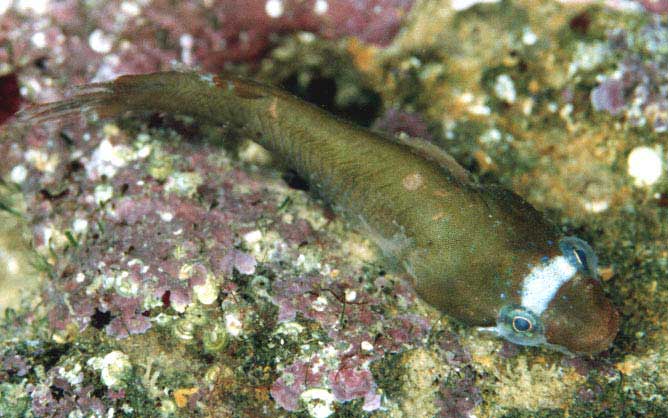 This very small fish (max size 40 mm) is found in the shallow seas and between the tides in the south and west of Britain. It is under-recorded and only receives the attention of 'rockpoolers'. It is the most widespread of 4 species of clingfish in the family Gobiesocidae found in British seas. It was recently known as Apletodon microcephalus. This specimen was captured and photographed by Robert Jones (of Trowbridge) from the shore at Dorset. Young specimens have been caught by John Barker and Andy Horton off Sussex. This species has been confused with Diplogaster bimaculata, the Two-spotted Clingfish.