ESCAPE OF KING CHARLES II FROM SHOREHAM in 1651

INFORMATION FILES
1651 Royal Escape
After the Battle of Worcester (3 September), Charles II had to flee from the Cromwellian forces. He eventually made his way to Bramber were he had to cross the substantial bridge over the River Adur.

Having said that, Col Gounter's very reliable eye witness account describes the scene in the early morning of 15 October 1651:
"The boatman in the meantime went to provide necessaries, and they persuaded the King to take some rest; he did in his clothes, and my Lord Wilmot with him, till towards two o'clock; then the Colonel called them up, and showed them how the time went by his watch; horses being led the back way to the beach, they came to the boat and found all ready. The Colonel then took his leave ... The Colonel waited there with the horses in readiness, in case anything expected happened.
"At eight o'clock (local mean time?) I saw them on sail, and it was the afternoon before they were out of sight. The wind (oh Providence!) held very good till the next morning, to ten o'clock, brought them to a place in Normandy called Fackham, some three miles from Haura de Grace, 15th October, Wednesday. They were no sooner landed, but the wind turned, and a violent storm did arise, insomuch that the boatman was forced to cut his cable, lost his anchor to save his boat, for which he required of me eight pounds, and had it. The boat was back again at Chichester by Fryday to take his freight." 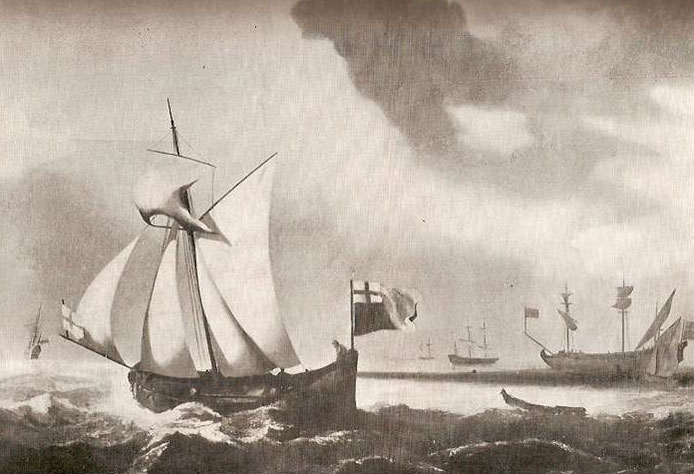 Charles II gave his own version of events to Samuel Pepys in 1660 and to anyone else who would listen from then on. Pepys wrote, using the king's words: "About four o'clock in the morning, myself and the company before named went towards Shoreham, taking the master of the ship with us, on horseback, behind one of our company, and came to the vessel's side, which was not above sixty ton. But it being low water, and the vessel lying dry, I and my Lord Wilmot got up with a ladder into her, and went and lay down in the little cabin, till the tide came to fetch us off. ...
"So about seven o'clock in the morning, it being high water, we went out of the port; but the master being bound for Poole, loaden with sea-coal, because he would not have it seen from Shoreham that he did not go his intended voyage, but stood all the day, with a very easy sail, towards the Isle of Wight (only my Lord Wilmot and myself, of the company, on board).
And as we were sailing, the master came to me, and desired me that I would persuade his men to use their endeavours with me to get him to set us on shore in France, the better to cover him from any suspicion thereof. ..."

Prior to this, Gounter made the arrangements with Captain Nicholas Tattersall, whose spelling he rearranged and the details help to fill out the picture. Writing in the third person, Gounter recalled: "After this, the Colonel began to treat with the boatman, Tettersfield by name, asking him in what readiness he was; he answered, 'He could not be off that night, because, for safety, he had brought his vessel into a Creake, ["breake" in Parry's version] and the tide had forsake it, so that it was aground.' It is observable, that all the while this business had been in agitation, to this very time, the wind had been contrary. The King then opening the window, took notice that the wind was turned, and told the master of the ship; whereupon, because of that, and the clearness of the night, the Colonel offered ten pounds more to the man to get off at once; but that could not be.... "

We are putting on an exhibition at Marlipins Museum from 25th May to 30th June to commemorate the 350th anniversary of Charles's escape.

The map nearest in date to 1651 is Dummer and Wiltshaw's 1698 survey of harbours on the south coast, copies in British Library, K Mar III, 67, and Bodleian (ref. not to hand, probably in Rawl.). This places the mouth west of Portslade, probably west of the 1815 mouth on the map in Brookfield. It also shows the 'late outlet' 500-600 yards further west - suggesting that some recent event (storm?) had shifted the mouth east. See also John Seller, ed., The English Pilot (1671).

1671  A timber wharf is at Kingston.(from the Victorian History of Sussex, with further references).

Shoreham: a tide haven, with 18 feet [on the bar at the mouth] at HWST, 3 feet at LWST and LW common tides, 12 feet a HW common tides. The town is almost a mile within the haven. Vessels drawing 8 to 9 feet can lie afloat at LW a little below the town, but lie dry elsewhere.
Information supplied by John Farrant.

1695  Copperas Gap at Southwick is used for the export of Iron ore to London. (from the Victorian History of Sussex, with further references).  This is at Fishersgate (due south of Portslade, old village).

1698
The Navy Board visits Shoreham with a view of constructing an additional shipyard, but there were problems getting the vessels out summed up as follows: "The haven's mouth is a very dry barr upon the ebbs of spring tides, and the outsea in foul weather throws up extraordinary quantities of beach in the manner of small islands; and whether you go in or out, you meet with great difficulties and hazard."

Also Dummer and Wiltshaw's 1698 survey of harbours on the south coast, copies in British Library, K Mar III, 67, and Bodleian.