Spring Dyke (TQ 209 068) Mushrooms:  Autumn 2004 to Winter 2005
5 January 2005
There was a single old orange Tube Mushroom, Tubaria furfuracea, attached to the base of a broken twig. Small Jew's Ear Mushrooms and lichens Parmelia caperata grew on the Hawthorn.
Adur Lichens 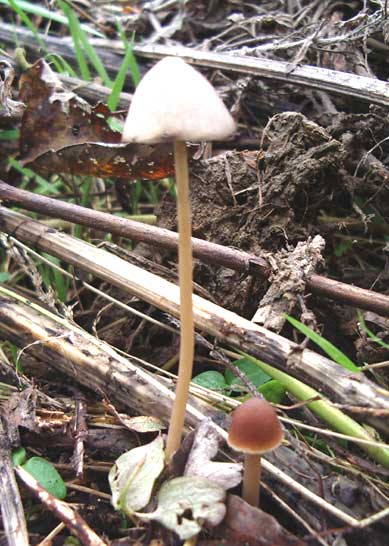 It was not until my departure (by the gate) that I discovered them. The red-orange mushroom growing from the reed strewn soil measured 22 cm cap diameter and it was 44 mm high and this is probably Tubaria furfuracea seen last winter (above far left). The other species (three images above, second from right to far right) looked much smaller, although the measurements of this tall mushroom were 90 mm high and a conical cap diameter of 18 mm, with a smaller specimen next to it which measured 65 mm high and a brown conical cap that was about 7 mm in diameter. This species came out of the soil and the base of the stipe was root-like as shown in the photograph on the far right. The smaller mushroom of the same species had pale cream-fawn-greyish gills that had not turned black.