Link to the Shoreham Weather Reports for 2009

25 December 2010
It was the coldest Christmas Day since I remember, with an air temperature at 7:00 am at minus 2.2 °C, with the Gentle Breeze (Force 3) that blew from the north at 10 m.p.h. The air temperature stayed below freezing throughout the daylight hours falling to minus 3.1 °C at 9:00 pm.

18 December 2010
There is a sprinkling of snow in the morning and drizzly rain during the day, but in other parts of the south-east of England there were substantial (10+ cm) falls of snow.

9 - 10 December 2010
The overnight temperatures kept above freezing falling to a low of 0.2 °C. The wind direction was changeable (from all directions except from the south) veering from north to east within an hour around dawn and then to west in the following hour.

9 December 2010
Early morning temperatures were minus 2.0 °C and below, but temperatures rose above freezing during the daylight hours. Despite this, my small garden pond remained frozen over and could not be broken with a rake.

6 - 7 December 2010
It was just below freezing for the whole of both days and nights with the Breeze (Force 3) from the north. 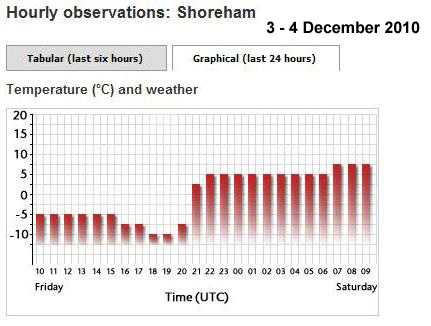 At midnight of the third into the fourth the weather had changed dramatically and the SSW wind could be heard whistling through the houses recorded at steady Strong Breeze (Force 6) gusting to Gale Force 7 (38 mph). The air temperature had risen further to 4.8 °C. The snow was still at depth of 150 mm in my front garden.
Met Office: Shoreham
Beaufort Scale

At 6:00 am the air temperature fell to an over night low of minus 6.3 °C, the second lowest temperature recorded this millennium. An hour later it fell to minus 6.7 °C which was only 0.6 °C above the previous Lowest Temperature this Millennium. The Light Breeze (Force 2) blew from the north. After midday, mist obscured the views of Lancing College and Mil Hill from the Adur Levels. There was low lying mist over the River Adur despite the low tide. Mist occurs with cold air over warmer water.
Met Office: Shoreham

On the west-facing slopes of Mill Hill the snow depth was measured at 190 mm and in areas exposed to the north-easterlies the average depth could reach 230 mm.

11 November 2010
A Force 5 blew steadily through the daylight hours from SSW, regularly gusting to Gale Force 7 and this could be seen on the sea with large waves forming and whitecaps everywhere (indicative of a Force 6).
Met Office: Shoreham

21-22 August 2010
Rain and cloudy weather conditions over the two days of the Shoreham Air Show was unusual and may have put a dampener on the butterflies for the rest of the year.

7 March 2010
Ice froze over the Common Frog spawn in my garden pond overnight as the air temperature fell to a low of minus 2.9 °C at 7:00 am (the lowest temperature in the south-east of England). During the day the temperature well above freezing, but the thin layer of ice remained in my north facing garden, until I broke the ice around the spawn.

10 February 2010
In the morning it tried to snow but it was after dusk before a very small smattering of snow laid on the ground, the breeze (Force 4) came from due north and the air temperature fell below freezing.

14 January 2010
The snow and ice had disappeared on the roof tiles and pavements outside of my house in Shoreham.

Much of the loose packed snow melted quickly to slush by the early afternoon. There was a steady drip from the evergreen and for trees on which the snow had landed. After dusk, the temperature rose and by midnight almost all the snow had turned to slush.

12 January 2010
A thin layer of snow laid over night, replacing the melted snow of the previous day. It was deeper than it first appeared, measured at 35 mm on the pavement outside my house in Shoreham. The night and day air temperature was fractionally above freezing.

11 January 2010
The thaw continued but with temperatures just above freezing (> 1.4 °C) throughout the day, a small impact was made on accumulated snow on the pavements and side roads. Widewater Lagoon was only partly frozen with large areas (75%) of open water.
Met Office: Shoreham

10 January 2010
The temperature rose just above freezing and the snow over my garden pond melted. Some snow on the pavements melted and there was a general dampness in the air. By the afternoon, the side roads had turned to slush and the main roads were clear.

9 January 2010
Further snow fell in the morning reaching an accumulated depth of 20 mm on the Shoreham pavements. The temperature fell to minus 3.1 °C at 7:00 am. The wind was blowing partly from the west so where no snow landed in places sheltered from the east winds before (notably the twitten between Corbyn Crescent and Adelaide Square in Shoreham, which was previously bare of snow), there was now a notable layer of a a few millimetres.

On Mill Hill it was difficult to gauge the depth of snow because of drifting, but it was measured at 120 mm. With the early afternoon northerly winds at a Moderate Breeze (Force 5) small ground blizzard conditions were created on the New Erringham pastures as the powdery snow was blown from the north-east.  The temperature remained just below freezing for most of the day. Snow lay on the ice of my pond in my garden.
Adur Teasels 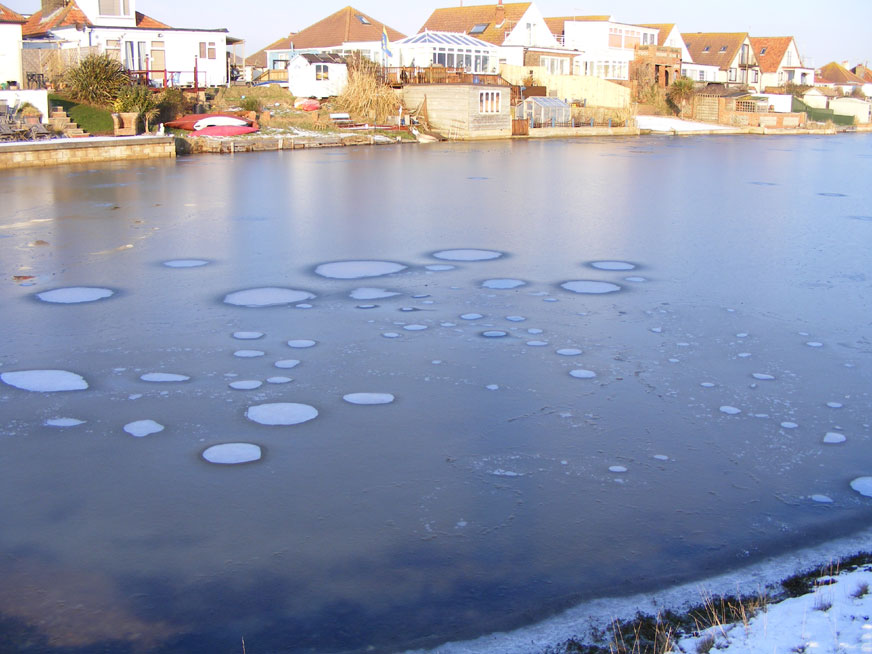 8 January 2010
A clear sky should have resulted in temperatures plummeting as it did elsewhere in Britain, but the lowest over night temperature was minus 2.0 °C. The saline Widewater Lagoon was frozen over with a very thin layer of ice; a cobble-sized stone thrown in would go though the ice, which was strong enough to support over thirty Black-headed Gulls. The central area of the lagoon, east of the bridge, was ice-free.
Adur Coastal 2010

7 January 2010
Awakening in the morning, looking through the gaps in the houses from my front window, on a clear day, I could see the snow was still appreciable on the downs pastures of New Erringham. At 9:00 am the air temperature fell to an over night low of minus 6.1 °C, the equal second lowest temperature recorded this millennium. The temperature rose throughout the day but still remained well below freezing with a negligible wind. The snow depth was a measured 25 mm on the pavements in Shoreham at first light.

Later in the morning I visited Lancing Ring where the snow was much deeper in the meadows and adjoining fields and the average was measured at 95 mm drifting to three times that depth. The snow on the east side of the trees indicated the direction of the wind during the snowfalls.
Met Office: Shoreham
Lowest Temperature this Millennium 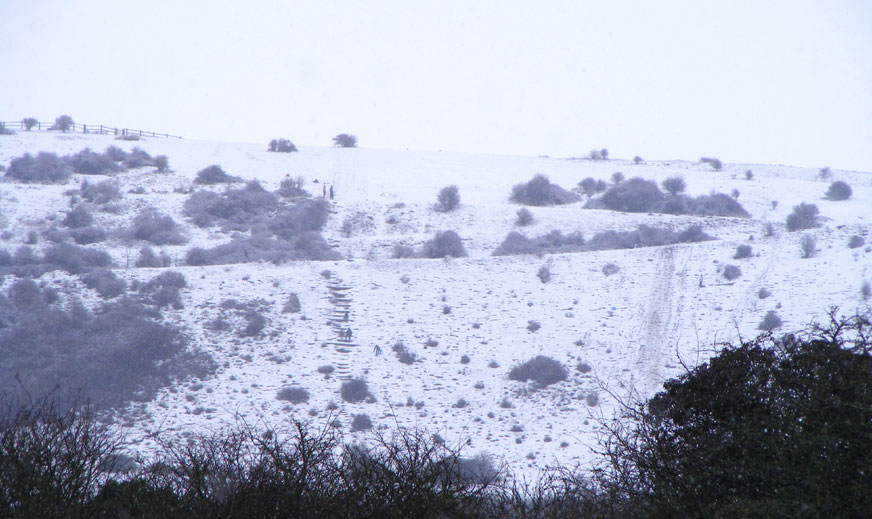 6 January 2010
A steady flurry of light snow blew in from the east in a Moderate Breeze (Force 5) but the air temperature remained just above freezing. The ground temperature must have been lower as the duration of the snowfall lasted for hours in the morning and a small amount of snow to 8 mm laid on the pavements of Shoreham. The downs and countryside were covered to a similar depth, but in places this quickly turned to slush. Pastures and arable fields were more sparsely covered, negligible in lots of places. About midday, the light snowfalls turned to sleet. After dusk there was a further snowfall of a few millimetres which stopped before midnight. The temperature fell below freezing (minus 1.9 °C at 11:00 pm).

5 January 2010
The air temperature fell to minus 6.1 °C at at 6:00 am, the lowest temperature this winter and the second lowest this millennium. The wind was negligible.
Met Office: Shoreham
Lowest Temperature this Millennium