Is Widewater Lagoon turning into a Seawater Inlet?


Widewater Lagoon is usually described as a brackish water lagoon with a level that rises through seawater percolation through the shingle and bottom of the lagoon and through rainfall. In this way the salinity of the lagoon fluctuates wildly according to the state of the tides and the weather.

This gives the lagoon a unique flora and fauna because only a limited number of organisms can survive in both low salinity and almost full strength seawater and these thrive often in the absence of predators that cannot tolerate the extreme conditions. This creates a special habitat recognised by nature conservation agencies and they are under an obligation to monitor and protect these declining habitats for the invertebrate life and other wildlife interests.

Although by dipping an electronic salinity testing meter into the lagoon at irregular intervals, it is known that the salinity fluctuates, there has not been a sustained measurement of the amount of seawater in the lagoon over the years. The brackish nature is correct because this can be deduced by the small invertebrate animals and algae (seaweeds) that live in the lagoon.

In the absence of proper monitoring, I took monthly water samples and measured the water temperature and specific gravity of Widewater Lagoon water from July 2002 to February 2004 using an aquarium thermometer with a wide scale calibration to include brackish conditions. The figures are then converted to calculate the salinity which is not precise but accurate enough to monitor the trends in the lagoon.

The graph above maps out the salinity variations over the last year and a half.  It should be noted that the summer of 2002 was noted for excessive rainfall which caused a dip in salinity in August 2002 and the maximum salinity only attained a maximum of 26 (parts per thousand) in September 2002. In winter with more rain the salinity always falls that it reached a low of 11 in March 2003. Thereafter there was a dramatic rise to 22 by April 2003. This was as a result of the equinoctial spring tides with the water percolating through the bed of the lagoon. 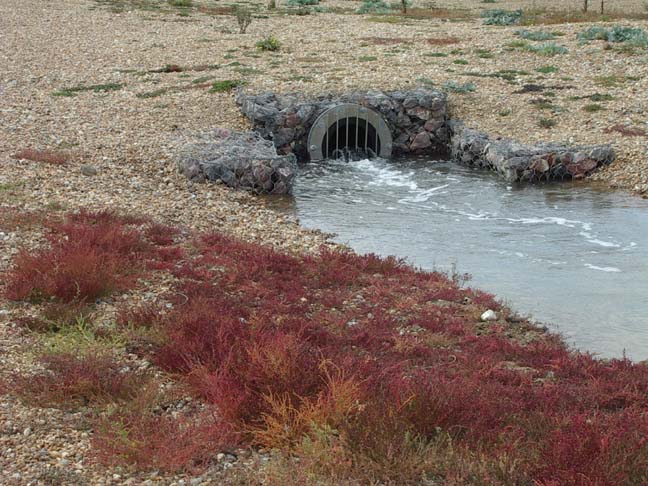 The new pipeline because operational (water actually entering) from the beginning of July 2003. Initially, the spring tides were low approaching the solstice and the amount of water entering was small and extensive dried out mud flats could be seen as the lagoon water had drained out of the bottom of the lagoon. Because of this the valve on the inlet pipe was adjusted and by August 2003 the whole lagoon was in flood and the salinity had now attained 35 which is the same as full strength seawater. By February 2004, the salinity had only fallen to 23.


This summer situation was unprecedented with the lagoon level over 50 cm on the gauge for most of the time and full salinity when the lagoon was in flood. All the dried out mud flats were then covered in water. The main loss of water is drained out of the bottom of the lagoon and the amount lost through evaporation is negligible and unimportant. This means that hypersaline conditions were not created.


Is this a Permanent Change?


From the salinity monitoring since July 2002, the observer could deduce that because the salinity had risen from a maximum of 26 to full strength seawater of 35% a permanent change was occurring and that the lagoon was turning into a seawater inlet more like Shoreham harbour canal and that this could have consequences for the brackish water inhabitants and the whole ecology of the lagoon. However, this deduction is unfair because it is only based on a comparison from the wet summer of 2002, and that earlier summer only readings on a lagoon with a low water level showed that in two out of three dry summers, the salinity in Widewater Lagoon attained the full level of 35 full strength seawater. This means that the summer salinity increase thought the pipeline was just in line with the natural fluctuations and would not cause any ecological changes over and above considerable natural fluctuations.

Rainfall and the autumnal equinoctial spring tides causes the winter level of Widewater Lagoon to rise and an appreciable fall in salinity as the winter progresses and the cumulative rainfall remains in the lagoon. There would seem to be no case for elevating the salinity and water levels in winter. The visiting birds may appreciate a slightly lower level to improve their feeding opportunities.

In dry summers the level of Widewater lagoon falls because the water drains out of the bottom and it is not renewed by either rainfall or the high spring tides percolating the water through the shingle. This causes the mud to dry out, to increase the loss of water and it also kills many of the molluscs, the miniature Hydrobia snail-like (gastropod) molluscs which are food for visiting birds and the Lagoon Cockle which experiences huge losses because of desiccation. By operation of the pipeline during the summer months the invertebrate population can be increased giving greater feeding opportunities for visiting birds in the autumn.


Changing the operation of the lagoon is not without its dangers and possible unforeseen consequences. Changes in the ecology of the lagoon will be inevitable, as they are without the pipeline. The pipeline could introduce new organisms like unattractive seaweeds, plankton blooms that could poison the water, suspended silt in the water that could accumulate over the years and it cannot be foreseen exactly what the changes will be. Other small animals will find their way into the lagoon through the pipeline.