ETHICS & CONSERVATION ON THE SHORE

By drawing the public's attention to the wonders of the seashore; do we run the risk of damaging what amounts to one of the largest wildlife wildernesses?

To see into the future, it is essential to have a clear vision of the present. How have man's activities affected the marine environment, and especially the zone between the high and low tides? This is a difficult question to answer succinctly. I think, generally, that the wildlife habitats of the seashore have changed detrimentally to a much lesser extent than any other terrain. And this is probably due to the nature and difficulties of exploiting the resources. In other words, the collection of prawns, shrimps, worms for bait, winkles, mussels, cockles, razorfish and aquarium exhibits etc. requires considerable time and effort, and a little bit of practice and technique, so it is only enjoyed by a few people who have a general interest in the seashore. There is no money to be made, and in many cases the energy expended in prawning or shrimping exceeds the rewards in food terms. 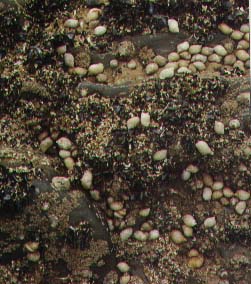 Periwinkles and Dogwhelks on a rocky shore

All this means that rocky shores, the ones of most interest to the 'rockpooler', have always been regarded as having little value, which has had the advantage that they were generally ignored by the public, and therein lies their wildness and source of interest.

However, there was one small drawback. Because these shores were regarded as being of insignificant value, some were treated with disdain, and this is demonstrated by sewage outlets that discharge straight on to rocky shores.

Rockpoolers are a minority group and I think this is likely always to remain so. However, we are the major group with a vested interest in the seashore, from the small 'bugs' and  attractive sea anemones to the higher vertebrate animals like the small rock pool fish and the marauding sea birds. By bringing to the attention of the general public the magical world of small marine creatures, we are increasing the profile of this wildlife habitat.

By stimulating interest, we can increase the amenity value of rocky shores, and, hopefully, prevent some of the pollution abuses. e.g. only bathing areas are on the agenda for awards for clean beaches in Europe. It may well be that eating contaminated seafood is a far greater danger than swimming in sewage-laden seas.

On the whole, I believe that by publishing information about the wildlife of the seashore, we are likely to create a greater respect for this environment and the fascinating creatures that live between the tides. At present some shores can resemble a dumping ground for waste products and the packaging discards of this throwaway society.

This is not always a problem for marine life. Blennies happily make a home for themselves in discarded coke cans. Plastic sheeting found in the sea off Dawlish, Devon, England, is reported by fishermen to be the only known habitat in the area for the uncommon sea anemone Hormathia coronata.

However, there is one word of warning. In Victorian times, publicity by Philip Henry Gosse, who established the first aquarium, and shipped seawater to London Zoo on the first trains, introduced the urban public to the creatures of the sea. The result was hordes of holidaymakers descending to the rock pools and stripping them of their rich life. The craze did not last long. Most of the early aquaria failed dismally.

The 1962 Nobel Prize winning author John Steinbeck brought the world's attention to a character Ed Ricketts from Ocean View Boulevard, Monterey, with a collaborative account of a marine biological collecting trip in the book entitled "Sea of Cortez" first published in 1941. Ed Rickett's also wrote the excellent guide to the Pacific shores in his book entitled "Between Pacific Tides". This was the first ecological guide to the seashore.

On the seashore, the most interesting finds have to be searched for, and this often involves a diligence and patience not shown by most people. Therefore, it is not envisaged that collectors for home aquaria could destroy this habitat. The figures of coastline length can vary because of the different ways of measuring it. The following lengths include the offshore islands:

The rockpooler should be able to find a portion of the coast that has not been deprecated by Man.

However, some people have a herd instinct that compels them all to visit the same place. Some special coasts that contain a particularly rich and varied fauna and flora of scientific interest could be vulnerable to collection of rare species, or just be damaged by the sheer number of visitors. One selfish irresponsible collector could conceivably spoil the right of other 'rockpoolers' to enjoy nature in its wild state.

The conventional method of 'rockpooling', and collecting softback crabs for bait, involves descending down to the shore when the tide is out and turning over rocks. It is important that the rocks are returned in the same position and the same way up in which they were found, because much of the invertebrate life like sponges and tubeworms could be destroyed by a rock carelessly tossed aside. Even small fish exposed by a moved rock could fall prey to the scavenging gulls.

The British Marine Life Study Society have adopted the Coastal Code originally used by the Nature Conservancy Council (now English Nature) and adapted it to make a clearer read.

In Marine Conservation Areas, as part of the wardening and management program, visitors are discouraged from taking home live animals, and not to even touch the creatures of the shore in case they are inadvertently killed (a small rock fish can be crushed to death if picked up by small fingers; the 'rockpoolers' method is to cup the hand and tease the fish into it). Rockpoolers can usually find alternative areas to visit, and for the most part, collection on a modest scale has no detrimental affect. 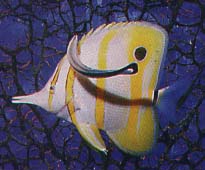 The number of niches has a great bearing on the populations, for example the number of crabs is determined by the number of rocks to hide under, and the number of urchins may be directly related to the food supply. Collection pales into insignificance (with the possible exception of over-exploitation of periwinkles) compared to large scale oil pollution and habitat alteration by such activities as offshore dredging. Natural variations can also cause great losses of marine wildlife, e.g. the "El Niño" phenomenon.