Andy Horton discusses THE COMPOSITION OF SEAWATER and other important environmental factors as they affect British marine life, with their practical implications in order to provide the fish and invertebrates with a satisfactory home in aquaria.

Since the first animal life forms appeared in the oceans 600 million years ago, and the appearance of the abundance of fish during the Upper Paleozic Era (known as the Devonian, and the 'Age of the Fishes') approxmiately 400 million years ago, the relative proportion of chemical constituents, and the acid-alkaline hydrogen ion balance (pH) of seawater in the oceans has remained constant. The salinity has also remained within narrow parameters in mid-ocean, with important variations in the proximity of freshwater outflows, and higher salinities in smaller tropical seas cut-off from the larger oceans.

We can conclude that marine life has not experienced great changes during evolution, and that the species are not adaptive to drastic alterations in the environment. The massive volumes of the oceans have a stabilizing influence. The aquarist keeps his fish and invertebrates in a minutest fraction of the natural seas, and must take continual care over the water quality.

The various merits of real seawater and commercial 'marine salt' mixes have been argued over by aquarists. Let us have a look at the ingredients of the real stuff. Seawater collected offshore contains:

85%, by weight, of the two principal compounds of sodium and chloride make up the bulk of the salts, the plain sodium chloride of table salt. In addition various other salts are present including sulphate, magnesium, and calcium. These and other elements present are necessary for marine life forms to survive. Table salt will not suffice. Artificial 'marine salt' mixes will also contain as many as 70 trace elements found naturally in the oceans, some of which are essential ingredients.

All gases that occur in the atmosphere are likely to be found in seawater, their concentrations dependant upon their solubilities, their chemical and biochemical reactions and the temperature and salinity of the water. Oxygen is discussed on another web page:

Oxygen in the Marine Aquarium

Nitrogen is important in aquarium conditions because of the introduction of nitrogenous material as food and conversion by the nitrifying bacteria, but is less important in the sea.

Carbon dioxide is highly soluble in seawater. It will enter the water through the respiratory activities of fish, invertebrates, algae and bacteria. It will leave the water by atmospheric interchange at the surface, or by complex chemical reactions with other elements in the 'Carbon Cycle'.

Real seawater contains masses of invisible planktonic life. The sea can be best described as a soup of invisible plant organisms (phytoplankton) and microscopic animals (zooplankton). In Spring the inland waters surrounding the British Isles may be coloured brown by naturally occurring blooms of phytoplankton.

In collected seawater, this phytoplankton can die within one hour and rapidly turn the water toxic. Natural seawater also contains bacteria and there is a theoretic chance of introducing pathogens, including free-swimming stages of parasitic animals such as Cryptocotyle lingua.

Marine creatures excrete soluble waste, urea, ammonia etc., which will be present in small quantities in seawater, but larger proportions are likely in aquarium conditions. However, the coastal waters can also contain a large amount of dissolved organic carbon (as much as 8 mg/litre in the Baltic Sea) from the decomposition of dead organisms, especially phytoplankton.

After storms or in the vicinity of dredging operations, seawater is likely to contain suspended silt or sand from the bed of the sea. This can be clearly seen from the turbidity of the water. However, even seemingly clear water may contain minute particles.

Beadlet Anemones in a Home Aquarium 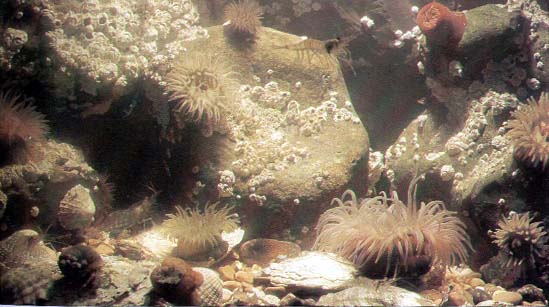 Artificial 'marine salts' are readily available from retailers, manufactured from pharmaceutical grade chemicals, in a crystalline form so that all the salts dissolve and do not precipitate out. Ensure that you specify your requirements for a marine aquarium, as tonic salts are sold in the aquarium trade for use in treatment of freshwater fishes.

The only other ingredient that you need is tapwater. All tapwater contains added chlorine, which is toxic to fish at low levels (0.2 - 0.3 mg/litre). It can be removed by aeration, using a diapragm air pump with a length of tubing and airstone for at least 12 hours before fish are introduced. However, various reports indicate the water companies may add other ingredients to the supply including   chlorine (which is rapidly oxidised but when mixed with nitrates can form the more persistant chloramine) and inadvertately ammonia and nitrates. Local aquarium retailers should, hopefully, be able to advise of the local conditions of the water supply.

For practical purposes, natural seawater tends to pose problems in use, rather than advantages. It should be collected and used within one hour, ideally, although sometimes it will be safe to use three hours, or even six hours after collection. The seawater undergoes organic and bacterial activity that rapidly turns the living substance into a toxic mixture. As the collected plankton has a limited lifespan, the introduction of fresh seawater results in an introduction of dead, or dying, organic matter. Scavengers like hermit crabs, some molluscs and sponges obtain nutrition from this source, but essentially the aquarist will just be introducing organic substances that will not be utilized by the larger animals, and will need to be broken down by the oxygen-consuming bacteria.

When establishing a large aquarium for the first time, the introduction of seawater can be advantageous, mostly in terms of cost. The organic input can also provide the genesis for the nitrifying bacteria.

The following points should be noted:

1) Seawater collected offshore is likely to be more stable in quality, less polluted, and of an even salinity. Water in rock pools is unsuitable.

2) Waters collected in estauries are possibly considerably diluted by freshwater, and because of its reduced density may be contained in a layer above the more saline tidal inflow. Check the specific gravity using a hydrometer.

3) Seawater may be murky and contain a lot of suspended matter after a storm, or in the vicinity of dredging operations.

4) Containers should be non-toxic plastic.

5) Pathogens, toxic blooms, or free-swimming stages of parasites can be introduced.

If real seawater is not to be used immediately, it can be rendered safe by being kept completely in the dark for 6 months, when all the plankton will have died and been consumed by bacteria. Some authorities advocate a period of as little as 3 weeks or one month. This may depend on where the water was collected. In my experience, seawater collected in nutrient rich areas and kept in the dark for one month was rapidly toxic to small fish.

PS:  Late robservations indicated that oxygen depletion in collected seawater is the main problem.  In high temperatures and when there is a plankton bloom the seawater may be unsuitable if used to change the water. It is suitable for setting up a new aquarium with vigorous aeration before introducing fish and invetrbrates.

The seas surrounding the British isles are consistent in their salinity, the offshore waters of the North Sea are recorded at 3.4% (usually written 34 or 34 parts per thousand) of dissolved solids, and on the Atlantic coasts at 3.5%. Some of the British fish are also found in the warmer waters of the Mediterranean where evaporation can result in salinity of 3.7% in the eastern basin. Some British species are euryhaline and will enter estauries where fresh water can rapidly reduce salinity levels. A guide to low salinity tolerance can be gained by observations in the wild, and by examining the distribution maps of species found in the Baltic. Because of the outflow of rivers into this enclosed sea, the levels of salinity are much reduced, and in the Kattegat, on the east coast of Denmark, the level will vary between 3.0% in the north to 2.0% in the south, depending on the prevailing currents.

It is important to keep ths salinity in aquaria within narrow bounds. I suggest that the aquarist should endeavour to stabilise the salinity at 3.4%, and replace losses by evaporation by fresh tapwater. Salts tend to leave the water in the aquarium and accumulate on the cover glass. If the salinity falls too low it should be adjusted at the regular monthly water changes.

A Hydrometer is an essential item of equipment for measuring the specific gravity, and hence calculating the salinity of the water. There are 2 types available.

If the bulbous hydrometer is used, it should be placed in the aquarium water when the filtration is turned off, and the reading taken at the water surface level shown in the diagram.

The specific gravity of water is denser at lower temperatures, and the reading on the hydrometer scale will be correspondingly higher as shown below:

Specific gravity of seawater with a salinity of 3.4%

Table to be added later.

The ability of fish to tolerate changes in salinity varies with different species. Invertebrates, especially Anemones will not thrive in reduced salinities. As a very rough guide a specific gravity reading of 0.001 corresponds approxmiately to a 0.1% alteration in salinity, and this variation is the tolerance limit. Water with a salinity of. less than 3.0% is defined as brackish; and in excess of 3.7% as metahaline, and likely to be found only in enclosed lagoons.

Synthetic marine salts should not be mixed in an inhabited aquarium. A fermentation bin, used in beer making is an ideal container for mixing the salts prior to changing a 20% maximum proportion of the water.

Natural sea water is alkaline and has a pH of 8.3. Under aquarium conditions the, the biological filtration process produces nitric acid, and this will tend to lower the pH towards neutral. The regular water changes help to keep the figure above 8.1, which is the minimum level.

Test kits are available to monitor pH levels, which can indicate when water changes are necessary.