Rockpoolers living on the Cornish peninsula are lucky because their shores are rich in marine life even during the coldest months of the year. Only very small differences in the air temperature which could be about 3º C higher than the Sussex coast on average as well as a more varied shore fauna could make life on the shore just that bit more hospitable for the small fish and crabs. The low spring tides occur around midday and midnight, so the pools will receive the heat of any sun. In Sussex and much of the east coast the low springs occur at dawn and dusk, so it is almost always dark at the low springs during January.

The rocky reef on West Looe beach is very gently shelving with large areas of flat slate rocks over sandy and gravel substrata, together with many large pools, and deep rock gullies overgrown with fucoids. We made several visits to this extensive shore during January of 1997 and found plenty of life under rocks and in the pools but it was not so varied and abundant as could be expected in the summer months.

Sessile organisms like the sponges and sea-squirts were discovered attached to rocks, as well as a sea anemone fauna which consisted mostly of the Snakelocks Anemone, Anemonia viridis, and at least two species of Sagartia.

The Furrowed Crab, Xantho incisus, was particularly common in January and during two hours of rock-turning we came across about 50 specimens. Most of these were the normal grey/brown colour. Other crabs we found on the beach included the Hairy Crab, Pilumnus hirtellus, and the Scorpion Spider Crab, Inachus dorsettensis. Squat Lobsters of more than one
species were present at the lowest tide levels. 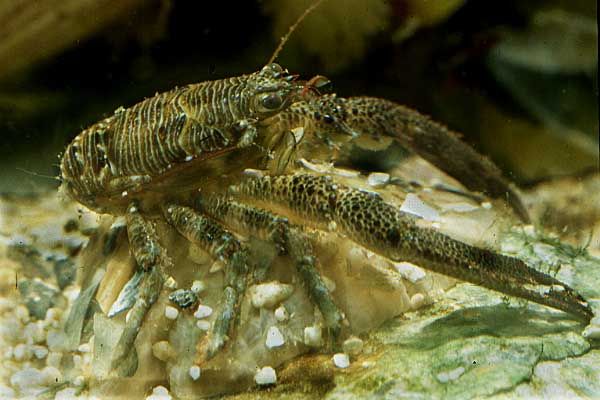 First Record of Sea-slug in Britain

On the 7th December 1996, I discovered a sea slug which I could not identify immediately and if my identification is correct would be the first record on the shore in Britain. However, I did not know this at the time. The body was a vivid banana yellow with an unmistakeable limpet-like shell on its back. It was about 25 mm long with a frilly-edged mantle. It was found under a hydroid-covered rock on the lower shore at Hannafore Point. There was only one species it could be: Tylodina perversa, (identified from the drawing on page 214 of the new Collin's Pocket Guide to the Seashore). This species is normally recorded from the Mediterranean Sea west to Madeira.

I visited the beach at Cawsand on the first Friday in January 1997 and was pleased to discover a specimen of the Lesser Octopus, Eledone cirrhosa, sheltering fully spread out, under a flat rock. It was about 13 cm across the tentacles. I went down the beach just to explore and did not have the proper buckets to take it home with me. I returned the following day, but it was gone. 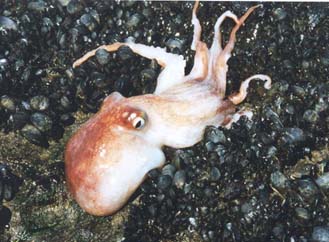 A Full Report on Hannafore Beach will feature in the next issue of Glaucus.