Bumblebees, Cuckoo Bees and mimics of the Adur Valley 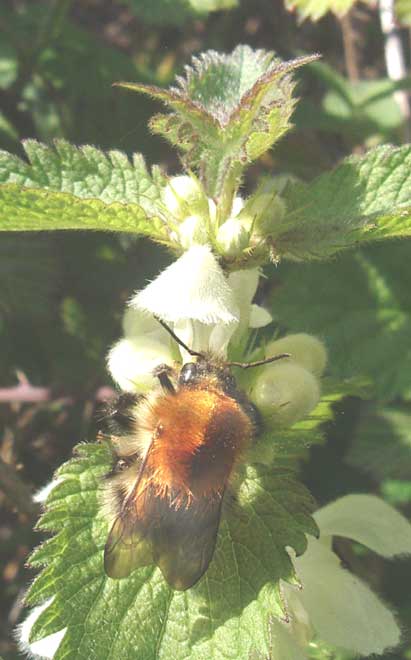 17 April 2005
The Red-tailed Bumblebee,Bombus lapidarius, was definitely confirmed from the wooded path by Slonk Hill South and the Common Carder Bee, Bombus pascuorum, from Shoreham gardens and wasteland.

3 April 2005
There were scores of Buff-tailed Bumblebees in gardens and the downs (Mill Hill) including, or perhaps mostly, queens. There was at least one Mining Bee as well in the back garden of 40 The Drive (near Buckingham Park), (TQ  219 063)
Adur Mining Bees

7 March 2005
At least two queen Buff-tailed Bumblebees flew around, crashing at least three times at full speed into the glass pane of the French windows at 40 The Drive (near Buckingham Park), (TQ  219 063).

2 February 2005
Just after midday, the first burst of sunshine of the year felt warm in a shade temperature of 9.7 ºC.
This attracted 25+ dark Honey Bees to a Hebe shrub in The Drive (near Buckingham Park), Shoreham, plus a queen Buff-tailed Bumblebee.

25 October 2004
Nothing of special note apart from the small bee (photographed below on the right) on the Devil's Bit Scabious. It was much slenderer and smaller than the Carder Bee. Its abdomen was also more distinctly "zebra" striped in black and white and not furry like the usual Carders. The legs are partly white in this specimen when bumblebee legs are usually black. The nearest match from the Collins Guide by Michael Chinery (p. 244) is Halictus scabiosa.
PS: The Old Collins Guide shows a better match for Lasioglossum malachurus, but this species has yellow legs. Neither of the illustrations are detailed enough to be sure as it could also be a species of Colletes. Colletes hedera is a feeder on Ivy late in the year. This last one seems most likely, but it is still not quite right.
The consensus on the British Insects (Yahoo Group) is that this small bee is a species of Lasioglossum, but the species is unlikely to be identified by a photograph (I did not think it was anything special when I photographed it).

The solitary bee is Lasioglossum xanthopum - the largest British species of the genus, with males that peak much later than any other species (typically late September/early October - we are still trying to work out how it mates as you rarely see females at this time of year). It is a rather calcicolous species and frequent on the Sussex downs, though I have never surveyed these late enough to see males. It is graded Nationally Scarce at the moment. It can be confused for the similiar Halictus rubicundus (slightly smaller with abdominal dust spots at the apices of the tergites as opposed to the bases like your photo).

20 October 2004
Approaching dusk, it was nearly dark when I squelched the muddy trail of the lower slopes of Mill Hill.

A Carder Bee (bumblebee) was asleep on the underside of a Devils's Bit Scabious flower.

24 September 2004
This is the Common Carder Bee, Bombus pascuorum photographed below. They were frequent on the lower slopes of Mill Hill.

18 August 2004
The following photographs were taken in the Butterfly Copse (TQ 209 063) by the Waterworks Road. 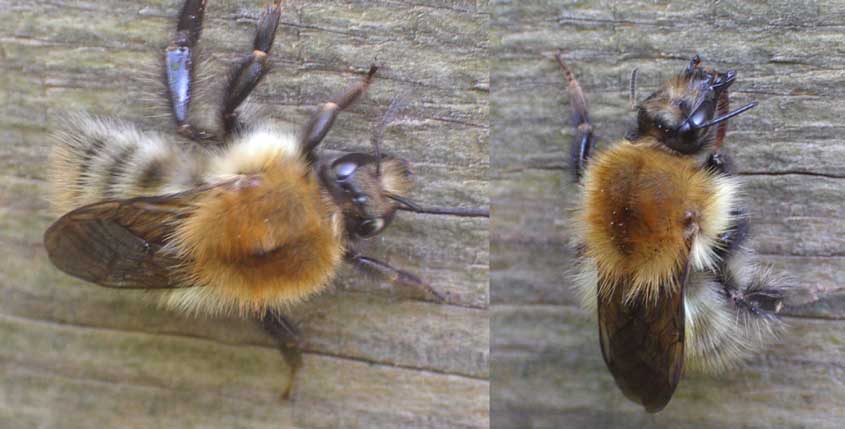 This one is the Common Carder Bee, Bombus pascuorum. Its legs are all black.

This is my first bumblebee of July 2004, and there are plenty of bumblebees around. It was on the path outside my front garden in Shoreham town. The lemony colour rather indicates the White-tailed Bumblebee Queen, Bombus lucorum.
ID confirmed by Matt Smith on UK Wildlife (Yahoo Group)

Buff-tailed Bumblebees were frequently seen, taking the whole meadow they were common with numbers well over a hundred. A few seemed to be the larger Vestal Cuckoo Bumblebee, Bombus (Psithyrus) vestalis, Queen shown in the photograph above.

ID  by Matt Smith
Cuckoo bees lay their eggs in the nests of bumblebees and their larvae are fed and looked after by the bumblebee workers.
This is one of the most common cuckoo bees. It has a yellow collar band, and a white stripey tail, with small yellow side patches at the top of the white tail. Its wings are browner than the wings of bumble bees.
from Mrs Smith's Bumblebee page
Until recently, cuckoo bumblebees were once considered to belong to a separate genus (Psithyrus) in recognition of their distinctive appearance and their behaviour as parasites in the colonies of other bumblebees. Lately, experts have, by and large, agreed that all bumblebees belong to a single genus, Bombus, with Psithyrus as a subgenus. Cuckoo bees are similar in appearance to bumblebees, but they have a softer buzz, indeed Psithyrus means murmuring as opposed to Bombus, which means booming. Other differences include the lack of pollen baskets on the legs and a sparser coat of hairs, through which the shiny black cuticle can easily be seen.
from the Arkive web page

19 March 2003
A steady stream of orange-tailed bumblebees were observed flying eastwards over the shingle beach to the seaward edge of Widewater Lagoon. Over a period of two hours, a bee must have passed every 30 seconds and I estimated the total numbers passing at about 136. Later in the afternoon a smaller fly-pass occurred.