Three weeks after the Sea Empress grounded, Ian Lawson visited Caldy Island near Tenby, one of the coasts that received large amounts of crude oil on the beach. Ian reported about 35 tonnes on the eastern side of the island, but there was no oil on the western side, which indicated the patchy distribution of the stranded oil. He saw one very sick seal which did not scarper when approached.

After the Torrey Canyon disaster, when most of the damage was caused by the liberal use of dispersants, it was generally reported that rocky shores are inhabited by resourceful and common animals that reproduce rapidly, and recovery of even the most heavily polluted shores was generally expected within three years. 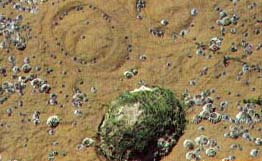 The heavy mortality of grazing molluscs like winkles and limpets that are important and abundant animals of rocky shores may reach a maximum of 50% on the most polluted shores covered with more than a centimetre of crude oil, although a figure of about 35% is usual. Other very common intertidal organisms that are present during the winter like sea anemones, the carnivorous Dogwhelk, a few small crabs and other crustaceans and  acorn barnacles are also likely to have received a high death toll. However, the fall in numbers of these animals is unlikely to be noticed except by rockpoolers and students of that particular shore. Recovery may not be as quick as three years and it may be as long as a decade before these common permanent invertebrates return to anything like their former numbers.

Rocky shores are not priority targets for the clean-up operation, which may actually be fortunate for the intertidal animals in some circumstances. Most of these areas will be moderately to highly exposed to the abrasive action of the waves, and this natural erosive process should succeed in removing most if not all of the oil by the end of 1996. The only circumstances when it is likely to remain is if it forms a hard non-toxic tarmacadam. Even in these conditions, the tar will eventually be eroded away.
The mass mortality of the grazing molluscs is likely to have a significant effect on the ecology of polluted shores. This is because limpets form an important function in keeping seaweed growth in check by cropping the growths of algae. Unchecked, vast areas of green seaweeds are likely to become established in a few weeks, followed by the fucoid wracks which may  become the dominant fauna on all but the most exposed shores.

Limpets reproduce by discharging sperm and eggs into the sea, followed by a planktonic larval stage. The young limpet then settles on the shore and in two years will be 5 cm diameter and graze an area of about 150 sq. cm. It can only graze on the small growths so if the large fucoid weeds get a chance to become established, the limpets will take several years to re-establish their former prominence. This weed explosion was noticed after the Torrey Canyon disaster when the use of dispersants in some areas may have caused a 90% limpet mortality. In areas where periwinkle over-collection has caused the same seaweed explosion, the shore shows very little evidence of returning to normal even after 10 years. It seems probable  that the limpet kills will not be high enough to cause any faunal alterations that are greater than natural fluctuations on most of the oiled shores. Periwinkles also reproduce by sexual discharge into the oceans.

Acorn barnacles are a fouling organism on piers and boats, and ever since people found that they had a planktonic stage have been trying to find a safe method to discourage them from settling on suitable surfaces. To a certain extent they are discouraged from settling on tar, especially if it is still sticky. Their high productivity will mean that by the following year they will be settling again in their former numbers.

Small crabs are very common on rocky shores (see Crabs) and many of them will have been killed by the spill. However, the February population on the shore is very low, under 10% of the summer populations. I would anticipate the complete recovery of the populations of all the common crustacean species by the following year.

Beadlet Anemones, Dogwhelks, Rough and Flat Winkles, are abundant and permanent shore residents that do not have a planktonic stage. They produce relatively few young or eggs and if there was a large mortality, their numbers are not expected to recover nearly so quickly. The exact period of time is not known, but it may be over three years. 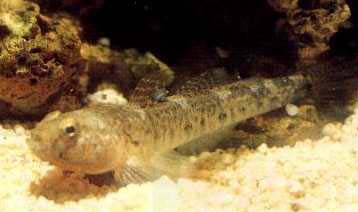 Rock pool fish like the blennies and gobies also lay small numbers of eggs that are guarded inshore or between the tides. The eggs are guarded by the male. However, they spend the winters offshore and although they would  venture inshore from February, their maximum breeding period would be from March onwards. Because of this mortalities are expected to be low. Even if they were high, they might not be any greater than the periodic deaths through natural factors like exceptionally cold winters that cause natural population falls. They seem to be able to recover from a bad year, but would soon be decimated in areas of repeated pollution. Young fish use the shore zone during summer months and even small amounts of oil contamination can result in starvation, but juvenile losses are large in normal circumstances and it is unclear whether the contamination makes any difference.

The south-west coast of Wales is the home of an  uncommon species like the Furrowed Crab, Xantho spp. where it could be locally common. If its population was decimated, with over 90% losses, in an area, the remaining crabs should produce enough planktonic larvae for recovery in a couple of years or so.


Although the common shore species demonstrate an astonishing ability to recover from huge mortalities, this is not the case for rare species in special habitats. If a rare species hatches eggs on the shore like the Green Starlet, Asterina phylactica, the recovery may be much slower. Studies (personal observations) of the abundant Dogwhelk, Nucella lapillus, that have suffered a 100% mortality as a result of TBT pollution indicate that recolonisation from other areas can take a very long time and populations may not even get a foothold for over 10 years. This is in contrast to settlement on virgin granite and concrete sea defences that have been erected in Sussex. An ecological succession of new animals is interesting and a varied community will be settled in three years. However, these communities are unlikely to develop into a rich rocky shore habitat for many years after.

Damage assessment is usually limited by absence of scientific data on what the shore was like before it was polluted by oil. However, because of extensive Field Studies Council records of the shores affected by the Sea Empress oil spill, for the very first time it may be possible to ascertain the damage caused to rocky shore and other intertidal and coastal habitats. Every other supposed account of the damage caused by the oil spill, like this brief article, is purely speculation, although there are many accounts of damage caused by oil spills from all around the world.

After the Rosebay spill in 1991 the ITOPF refused to fund a post-spill survey of the south Devon coast on the grounds that there was no pre-spill biological base information. Surveys are now being prepared for important and interesting sites around the British coast.

Mike Camplin of the Devon Wildlife Trust summarised the effects of oil pollution on different shores on another web page. Click on the text for this information.