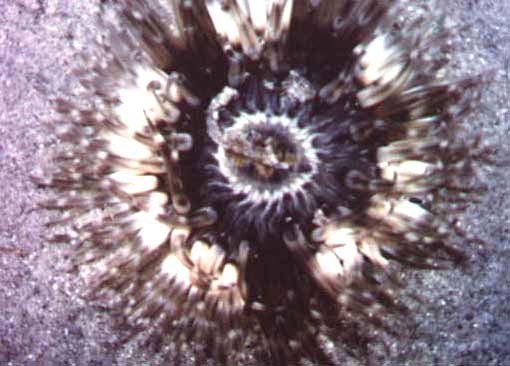 An abridged text of the talk presented at the Coelenterate Society meeting at the School of Ocean Sciences,
University of North Wales in October 1993.

The Sagartiidae family of sea anemones with three British species have a reputation of being difficult to distinguish apart. However, with practice it is meant to be easy to identify them in captivity when all three British species are on show.
Colour is not a sure method of identifying sea anemones, and this is especially the case with Sagartia troglodytes which is more variable in colour than any British sea anemone.

The chart shown in the definitive identification guide i.e. British Anthozoa by R.L. Manuel helps in identification in aquaria, although it does not prove to be so useful in the wild. A guide to the differences is printed below.

Cereus pedunculatus can be separated from the Sagartia when viewed together by the much larger number of tentacles, slightly shorter, which are grouped together more closely.

However, if you are not careful the chart can be misleading. It is the difference between the two Sagartia species that can cause the problems. I have found the two most useful tips are to consider:
1) the readiness to emit acontia.
2) the readiness to attach gravel to the suckers on the column.

Acontia are the thin, usually white, threads that are emitted by several species of sea anemone as a defensive behaviour. The threads contain nematocysts the stinging threads (capsule) which have been known to kill small fish.

In aquaria study it can be seen that these acontia are discharged much more readily in Cereus pedunculatus and Sagartia elegans. A crab or small fish will inevitably cause this reaction, whereas it is unlikely in Sagartia troglodytes. However, this behaviour can be misleading in the wild. On some shores Sagartia troglodytes is only found tucked away in crevices and to obtain a specimen to have a look at is difficult. Efforts to extract the anemone can result in the acontia being emitted, quite quickly.

The readiness of Sagartia troglodytes to attach gravel to the suckers is very apparent in aquarium study. However, in the wild it is found buried in sandy locations, so there is no gravel to attach, although there may be broken shells, and in any case the column is hidden from the casual viewer.

The same applies to the base which is hidden. All three species can present difficulties in detaching the anemone, especially the larger specimens. I have searched for evidence of but have not yet been able to find miniature counterparts of Sagartia troglodytes reproduced viviparously. The young would be very small.

The first record I have of the discovery of the anemone Sagartia troglodytes is by Price in the History of British Zoophytes by G. Johnston in 1847. The generic name then was Actinia. Actinia elegans was not differentiated until the following year. The generic name Sagartia was created by Philip Henry Gosse in 1855 (03.01.28).

In suitable locations of sand and rocks, and at the right time of the year, (excludes winter); the seashore and shallow seas could be covered with an attractive carpet of these anemones in a bewildering variety of hues. The anemones will be attached to a rock about 35 mm to 50 mm below the surface, with only the tentacles expanded up to a width of 40 mm in the shallow pools. It is one of the smaller species.

Although where present Sagartia troglodytes is often abundant, and is found all around the British Isles, this species is not as widespread as the Beadlet Anemone, Actinia equina. In the absence of the a Distribution Atlas of British Anthozoa, my knowledge of the distribution of this species is exiguous and I would be pleased to hear reports from around the British Isles, both coastal locations and sub-littoral.

It seems to favour limestone or chalky substrate with rocks as attachment points. In Devon and Cornwall it seems that Sagartia elegans and Cereus pedunculatus are more common. Exactly why this is I am not sure. Distribution of both species of Sagartia is centred on the British Isles, and includes Norwegian and French coasts and the Mediterranean Sea.

As many as five large 'catch tentacles' seem to be enlarged versions of existing tentacles, and these can be best observed in aquaria. They are usually translucent. In the wild, this anemone is known to eat shrimps and small crabs that are 75% of the bulk of the anemone, and these tentacles would be necessary to manoeuvre the prey to the mouth. They will actively search the surrounding water for prey of mostly small crustaceans.

Catch tentacles are controversial in a number of ways:
1) They are recorded as not existing in preserved specimens in species like the Plumose, Metridium senile, in which they are actually quite common. This is because they are not separate tentacles.

Pic to be included


2) American research in different species of sea anemone attempted to prove that these 'catch tentacles' were used in territorial warfare between species of the same anemone to ensure spacing. In the wild Sagartia troglodytes will be found at least an anemones width away from other anemones.
Aquarium experiments to try and induce the 'catch tentacles' to appear - not a predictable task - but I have managed this by introducing live Artemia brine shrimp into the aquaria and this stimulated the 'catch tentacles' to search the surrounding water for nutrition.
Addition to follow  See Five Kingdoms

Successful aquarium study hinges on keeping this anemone away from other animals, especially fish, that will pinch all its food.
Predators include the Grey Sea Slug, Aeolidia papillosa, with a population number that rises and falls with the number of anemones found on the shore or offshore habitat. Hairy Crabs, Pilumnus hirtellus, will dig up these anemones, and they will be attacked and sometimes eaten by Tompot Blennies, Parablennius gattorugine.

Appearance on the shore is not the same every year. Study at Worthing (Sussex) indicated a mass movement on to the shore in spring (February to May) in two out of three years.

As anemone enthusiasts will know, these animals can move in two different ways.
1) Crawl along on their basal disc.
2) Anemones can inflate and let the tide and currents take them to new locations.

The column is usually a flesh colour with pale endocoelic (chamber between a pair of mesenteries [internal tissue wall]) lines. These vertical stripes are not so pronounced as in Sagartiogeton undatus.
The colours of the tentacles are highly variable. I examined hundreds of specimens, mostly in the wild, and noted their colours, and photographed scores of them. I was able to ascertain the colours of the disc and tentacles as follows:

1) buff or brown on tentacles and disc. 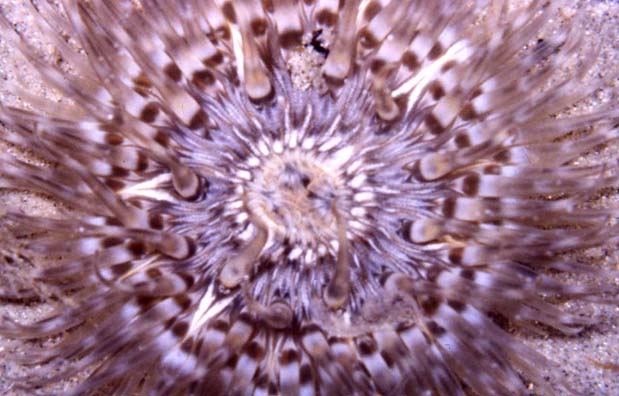 2) black.
3) white, including translucent and grey.
4) orange, usually the tentacles only. 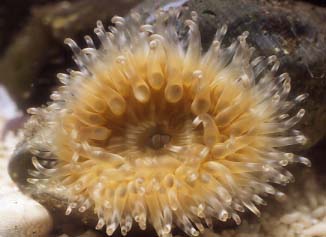 5) yellow. (occasional tentacles on black or drab specimens were gold) 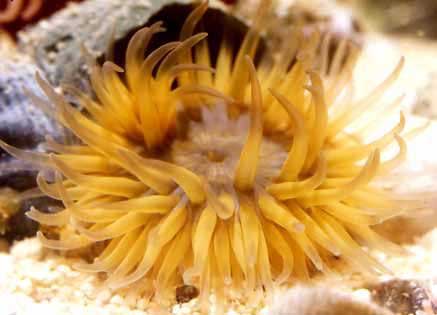 6) red with a purplish tinge, with a brown disc. (in the wild they look red, but not the pillar box red of the Beadlets). 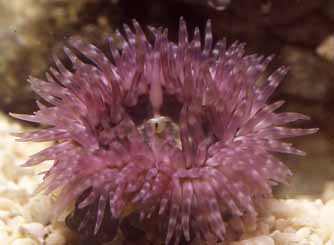 7) green, with a flesh colour disc.

These colours are usually mixed in combinations of two or three colours. Frequently all white or all black or all yellow specimens can be discovered. Despite these variants, there is a large proportion of the larger Sagartia troglodytes anemones that are consistently a drab buff brown colour with perhaps a few black markings. They actually reminded me of the colour of the Jenny Wren bird. This comparison may have been noticed before because the scientific name of the bird is Troglodytes troglodytes. 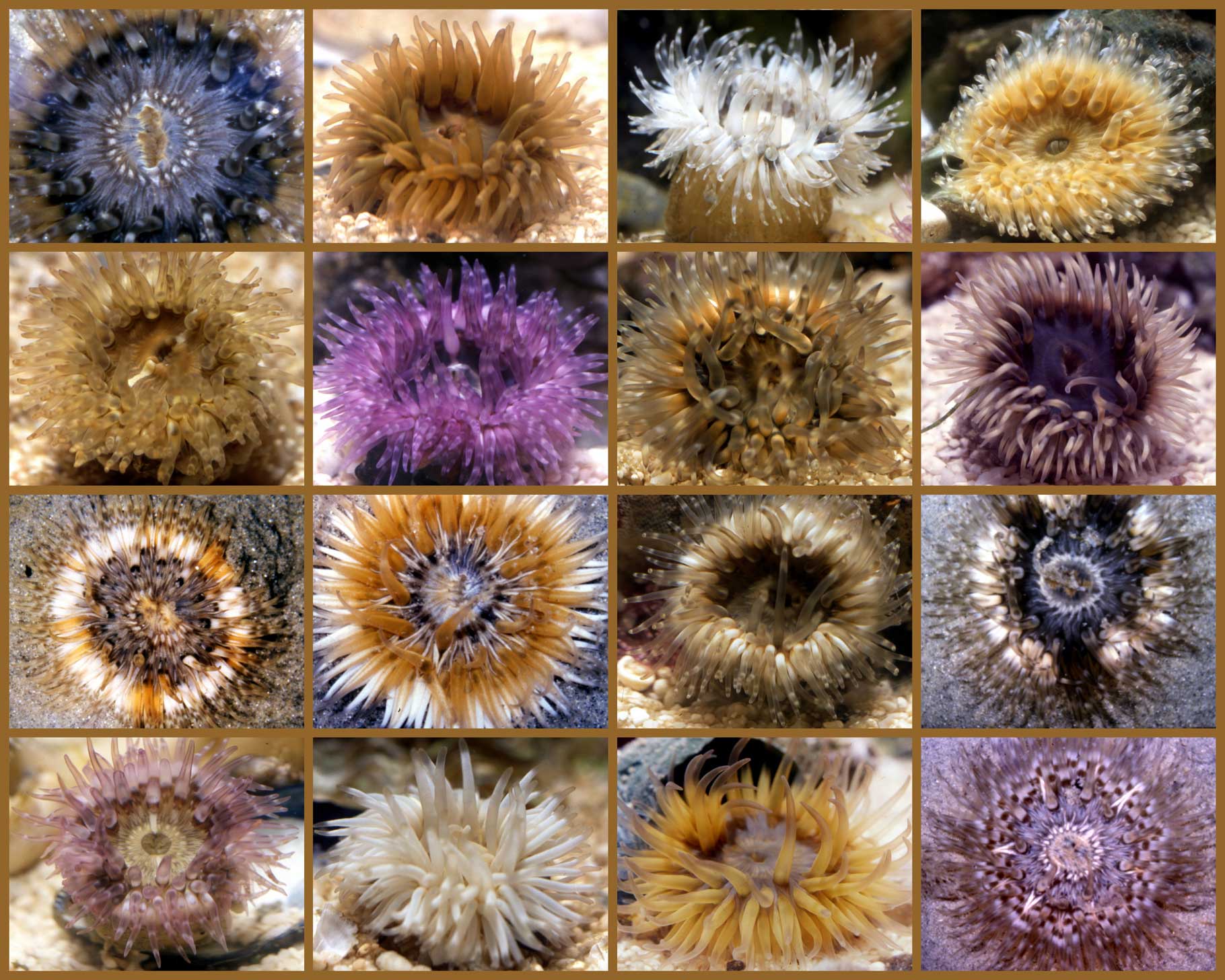 Blue specimens were searched for, but no hint of blue was found in thousands of specimens examined. Manuel states clearly that red does not occur either, but crimson specimens (not quite red) are common.

Fascinated by the appearance of the 'catch tentacles' I watched a particular anemone over a period of a few days. Up to five of these translucent tentacles emerged and searched the water over a period of several hours, and then retracted. In a period of one day, the colour of the anemone changed from crimson to a buff colour.

Collection is not always straightforward and sometimes impossible. When small specimens are on the underside of stones they can be peeled off carefully - they are more adherent than Beadlets. If they are in shallow pools they will be attached to a large rock (cobbles or boulders) below the surface, and it is almost always necessary to dig up the rock trying to cause as little damage to the habitat as possible. I use a small trowel, and many of rocks defeat me.

Part 2 will include some more observations and the smaller anemone Sagartia ornata which is now regarded as a separate species.