TERROR OF THE ROCK POOL
by Andy Horton

Viewed from above in its natural habitat the Bullhead (or Sea Scorpion) can easily be mistaken for a rock.  The mottled brown and cream colour patterns render this fish almost invisible within the algae covered pools of the British coastal region. 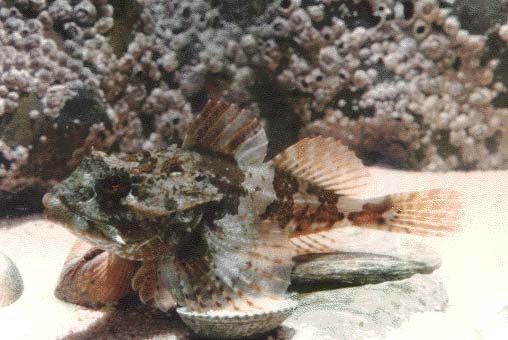 A prawn dances gracefully over the floor of a seaside rock pool, skirting the fronds of carragheen, its long tentacles feeling ahead cautiously.  Two large eyes revolve within their sockets. The unsuspecting prawn ventures closer.  Attention!  The rock moves, dorsal fins stiffened to maintain equilibrium, rushing headlong from its lair; a large expandable mouth closes over the unfortunate victim.  Two long tentacles protrude from the immense jaws. 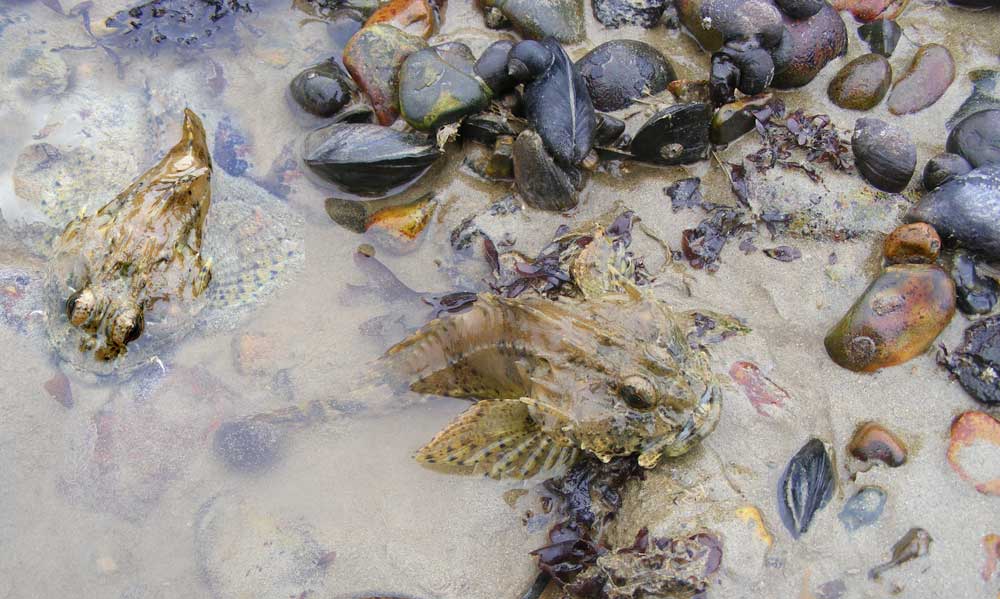 The Bullhead Taurulus bubalis is an extremely voracious predator with a marked taste for prawns and small fish.  A veritable terror of the rock pools; a rapacious hunter that camouflages itself amongst the rocks and captures its prey with one enormous gulp from its gigantic mouth.  It is capable of capturing fish even larger than itself, digesting its own weight in food, in only 50 minutes. 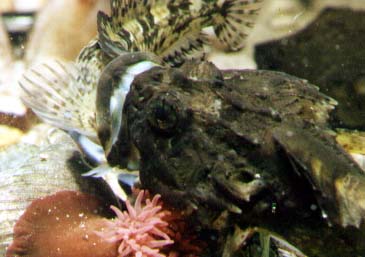 
Hidden amongst the week growths of intertidal pools or stealthily haunting the shallow seas, the Bullhead will remain motionless for hours.  This is not surprising.  In common with the rest of the family Cottidae - the fish has no swim bladder.  When it ceases to swim, it sinks to the sea bed. Cottids, or Bullheads, as they are widely and aptly known, are characterized by an ugly flattened head, very large and wide, that in substance is equal to the remainder of their tapering bodies.  The Bullhead is the commonest of the family, found on rocky and week strewn marine habitats in the immediate vicinity of the shore.

Two other fish of the family are found in British coastal waters.  The Short-spined Bullhead (or Bull Rout) Myoxocephalus scorpius is larger and lives in slightly deeper water.  The Norway Bullhead, Taurulus lilljeborgi is classified in the same genus.  It is smaller, found on Scottish coasts, and not nearly as common.  Female Bullheads attain a maximum length of 18 cm, the males only l5 cm.  The three fishes are difficult to differentiate. The Bullhead has at least four spines on its front gill cover, the two uppermost exceed the diameter of its eye.

Perhaps, because of the reputation of the venomous Weever fish, Echiichthys vipera, or because it looks like the dangerous Mediterranean Scorpion fish, it is often regarded with horror. The spines are not venomous, although they could give the careless a nasty graze.

Common during the Summer months on most rocky shores, its presence coincides with the migration of prawns into the littoral zone as the water becomes warmer.  My field observations indicate that prawns form the bulk of a varied diet.  Small Corkwing Wrasse, Crenilabrus melops are also eaten frequently.   On mixed fishing grounds where sand or mud intersperse with rocks, they will readily take the opportunity to feed on shrimps, worms and small fish.  They do not have sharp teeth at the front of their mouth, so they are unable to tackle the heavily armoured crustaceans, the crabs and their ilk.

How to Catch this Fish

A low Spring tide during the Summer is the best time to catch this fish.  Small rock pools are uncovered by the receding waters.  These natural sea aquaria play temporary host to a variety of small marine creatures.  Anemones flutter in the still pools and small fish conceal themselves amongst crevices.

The fauna is richest as you approach low water mark.  A sharp eye is essential.  At first the pools seem lifeless, but if you take care with the fall of your shadow, a microcosm of the sea will gradually materialise.  In a smallish pool, Bullheads are easy to capture.  Gently slide the aquarium net under its spiny head and attempt to ease the fish out of the pool. Invariably, it will hurtle frantically into the net, attempting to escape.  If it avoids the net in the commotion, it seldom ventures far, settling on the substrate less than one metre away. 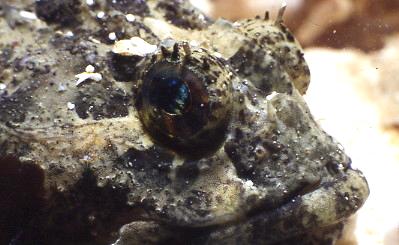 It would stretch the most grotesque imagination to keep this fish in aquaria entirely for its beauty.  The squat form is ideal for withstanding the waves breaking over it, but is unlikely to enhance the living room.  Banished to a spare room or cellar, the fish will provide entertainment with its aggressive behaviour and readiness to feed.  It will attack anything that moves, especially hydrometers, air bubbles and aquarists.  To the sardonic appreciation of visitors, it can be relied on to the make a show.  Boiled mussel flesh will send the Bullhead hurtling like an angry bull, the full length of the tank, its jaws opening frantically in a desperate quest for food.  It has a tremendous appetite and will not be satiated until its silver belly is doubled in size.

Fish living in rock pools need to be extremely hardy to withstand the rigours imposed by their habitat.  The Bullhead is adaptive, able to withstand a gradual temperature rise of 5 ° C within twelve hours.   The English Channel varies from 9o C to 17o C , and this is the ideal temperature range.  The maximum temperature for the adults is 22oC. This usually means installing a cooler. 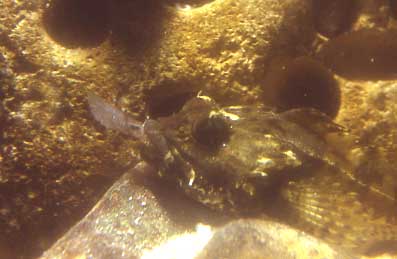 The Bullhead will settle down immediately in the aquarium, and start to gobble up the rest of the inmates within seconds of introduction.  Exceptionally, a fish will not accept dead food for a couple of days.  Otherwise, feeding presents few problems. They will enthusiastically take boiled mussel, raw or cooked white fish, and earthworms.  It is a good idea to keep a few live prawns in the tank for the Bullheads to capture at their leisure.  For amusement and pandemonium, shrimps are the best live food.  A 10 cm specimen requires a small mussel, or equivalent, every two days.  Three fish of this size can easily be kept in a 90 cm tank.

Gravel and rockwork provides a natural decor, with perhaps a sprinkling of crimson and brown Beadlet Anemones, Actinia equina, commonly found in sheltered pools between the tide marks.  These add a splendid and colourful contrast to the drabber Bullhead.

Despite its relentless predation, the fish can be kept with a variety of other creatures in captivity.  Anemones, crabs, and most molluscs are compatible.  All these are bottom dwellers.   In  the free swimming area,  the companion fish must be substantially larger. Bullheads will make short work of fish smaller than themselves.  They cannot be guaranteed to live happily together. Large Bullheads have been known to swallow smaller fish of their own kind.

Their defensive spines may prevent them from eating each other. Although not a shoaling species, over one hundred fish could be grouped together so closely, that every sweep of a prawn net could capture from one to half a dozen fish.

Carragheen: Chondrus crispus.  A type of red seaweed, also known as Irish Moss.  It can sometimes be kept in marine aquaria.

Shellfish (Molluscs):  Marine snail type and bivalve shelled invertebrates.  It does not include prawns and shrimps.  (Squids etc. are molluscs, but these cannot be kept with Bullhead).