If you are under the mistaken impression that large predatory sharks do not live in the seas around Britain, you are in for a rude awakening in the unlikely, but not impossible, event that you should encounter the Six-gilled Shark, Hexanchus griseus. Adult specimens are the third largest predatory shark of the oceans and measure nearly 5 metres in length (compared to the 7 metres of the Great White Shark).

They are armed with six rows of teeth, which they use to good effect mainly  to prey on other fish and smaller
sharks. They are also able to tackle squid and crabs, and there are reports of this shark chasing and eating
seals. The Hake, Merluccius merluccius, is an important item of prey in the north-east Atlantic.

Fortunately for swimmers, the Six-gilled Shark is an inhabitant of the deep sea and will only rarely enter
shallow water. If there is a large shark harassing the local seal population, divers do not hang around to find
out what species it is, and when half a tonne of hunting shark cruised by in Sandsound Voe in the Shetland
Isles in January 1998, the divers got out of the water rapidly. The species was not identified. There are only
a few predatory sharks that get this big, and in British seas the only other possible predatory species is the
Greenland Shark, Somniosus microcephalus, which lives in the cold northern seas.

The largest shark found off Britain is the huge plankton-eating Basking Shark, Cetorhinus maximus, which
may reach 9 metres in length and is sometimes seen in very shallow water.

The Six-gilled Shark is an active shark found in seas of  between 200 to 1000 metres deep. These depths
occur only off the Continental Shelf to the south and west of the British Isles. Between 1960 and 1984, at
least 31 specimens have been recorded off west Scotland, south-west Ireland, the Faeroe Bank, and west of
Ireland down to 964 metres. The majority of reports are from the main fishing areas along the shallower
slope on both sides of the Rockall Trough, which is the 1000 metre deep trench that runs between the
Rockall Bank and the Irish coast. This very deep trough extends from Iceland down to the Bay of Biscay.

It is only the smaller specimens that stray into shallow water in the proximity of much deeper water that
occurs off southern Ireland. A few specimens, up to 54.3 kg., have been caught by anglers around Dingle
Bay and Kenmare Bay, County Kerry. In 1995 an adult measuring 3 metres was trawled close to the Scottish
coast. Fishermen are not required to keep records of this shark and they are returned to the sea. Therefore,
the fish may be much commoner than the few records indicate. Philip Vas has compiled a list of 200
sightings, mainly from commercial trawlers, from 1963 onwards, varying in size from 68 cm to 315 cm.

Hexanchus griseus have six pairs of gill slits (the majority of sharks have only five pairs) and with only one
dorsal fin, set near the tail, it is most distinctive. Mature specimens from 3.5 metres to nearly 5 metres total
length spend all their lives in very deep waters from 500 metres to 2000 metres, with possible excursions to
shallow waters at night to feed, but very little is known about their behaviour.

It is mainly the juveniles and immature specimens that are caught or seen inshore. These small specimens are
rarely larger than 2.5 metres, weighing about 91 kg ( 200 lb).  When I say small, that is when compared to a
very large, stout bodied, round bluntly pointed headed, mature female of 4.82 metres (15.4 feet), and
weighing more than 650 kg (1432.6 lb).

The colour ranges from dark brown to dark silvery grey. This shark has large opalescent eyes. There are
unconfirmed reports of this species being able to change colour for short periods of time, which may help
this slow-moving predator approach close enough to capture large fast-moving prey.

This fish is found in all the deep oceans and a different coloration has been noticed in different areas.

Female Six-gilled Sharks mature at a length of between 4.2 metres and 4.5 metres. They are ovoviviparous,
which means that the eggs hatch inside the mothers body, so the young are born alive and fully formed.
They have a remarkably high fecundity (litter size), producing 22 to 108 live pups in every litter, each about
65 cm long, and weighing 1.2 kg.  A female 4.21 metres long captured off Church Rock, California,
contained 51 embryos nearly ready to be released.

In August 1997 Philip Vas removed two Six-gilled Sharks from a hake net, both were very small at  78 cm.,
and estimated to be only one year old. He showed me one of them when we met at the opening ceremony of
the Shark Trust.  This baby shark started my interest in discovering more about the species.  A third
specimen caught in September  1997 was a larger female of 1.61 metres and weighing 12 kg. which was
caught 80 miles south-west of Newlyn, Cornwall in a large catch of pollack.

In December 1997, 60 to 70 Six-gilled Sharks were caught using longlines at over 100 metres depth and 100
miles off Long Rock in the western approaches to the English Channel.  The sex of the sharks was unknown
but the sizes varied from 85 cm up to 220 cm. The skipper stated that he gets them all the time. 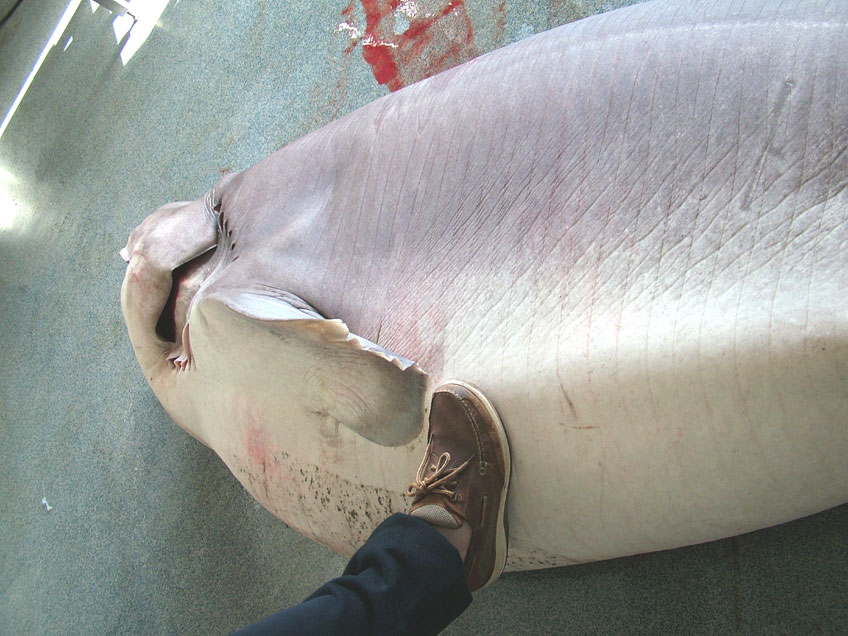 A rod caught Blunt-nosed Six-gilled Shark, Hexanchus griseus, was landed on board the Clare Dragoon out of Carrigaholt, County Clare, south-west Ireland. The fish which weighed in at 480 kg, (1056 lb), beats the existing European angling record which stands at 466 kg and was landed in the Azores.
The shark was caught about three miles off Loop Head in County Clare Ireland. I believe the official length was 12 ft 6 " and weight 1056 lb. It was caught by a 70 year old man who had it on for 35 minutes . It could not be brought on board as it was so big so they tied a rope around its tail and towed it into Carrigaholt pier. I have added some more photos. The guy with his foot in the picture is a size 12 to give some idea of its size. I think its gerth was 8 ft.

The Irish record Sixgill stands at 69.8 kg (154 lb) caught by Andrew Ball of Essex in 1968. In the late part
of 1993 off Baltimore Southern Ireland a much larger specimen was hooked by Stefano and handed after 45
minutes to Keith Walker who brought it to the surface.  This super fish weighed 142.8 kg (315 lb). As two
people touched the rod the old record still stands. (Angling Times September 1993).

All measurements for the sharks in this article are for the total length, including the tail fin.