Study of the animals and their remains washed up on strandline

A MASS STRANDING IN TORBAY
by Chris Proctor

On Sunday the 12th September 1993 south-west England was hit by a deep depression moving in from the Atlantic. The resulting gale was not particularly heavy (wind speeds of 60 mph were reported at Berry Head that evening), but the wind direction was unusual. The position of the depresson, with it's centre to the south of Britain, meant that the wind blew from the east, straight into Torbay. Most gales in this part of the country are caused by depressions passing to the north and blow from the south-west, leaving the bay sheltered. Conditions were spectacular. At Hope's Nose a 3 metre swell broke over the rocks, producing plumes of spray perhaps 10 metres high. A heavy surf was breaking on the beaches at Paignton and even in the most sheltered corners of Torbay the sea was rough. The following day the wind veered to the northeast and abated somewhat: by Tuesday the 14th the gale had ended.

The direction from which this gale blew meant that it's full force was felt along a stretch of coast normally sheltered from heavy weather. In several ports in the southwest, there was extensive damage to boats in normally sheltered anchorages. Little damage was reported in Torbay (except the iron railings beside the Shoalstone open air swimming pool which were swept away), but the effect on marine life was spectacular. Over the next few days I visited the beaches between Broadsands in the south and Torre Abbey Sands to the north to see what had been washed up. At all the beaches visited large amounts of material had come ashore, but by far the most impressive stranding was at Preston Sands just north of Paignton. Here the beach was an amazing sight. Much of it was buried under piles of weed, and near the north end massive drifts of dead animals, mostly molluscs, had accumulated. A wide variety of animals had been washed up: the more interesting species are discussed in detail below.

From the nearby rocks came thousands of Common Mussels, Mytilus edulis, and a variety of other animals, mostly common shore inhabitants such as Shore and Edible Crabs Carcinus maenas and Cancer pagurus, and the Green Sea Urchin Psammechinus miliaris. A few were probably derived from rocks below low tide mark, including a Ballan Wrasse Labrus bergylta, and the tail end of a Spiny Squat-Lobster Galathea strigosa. 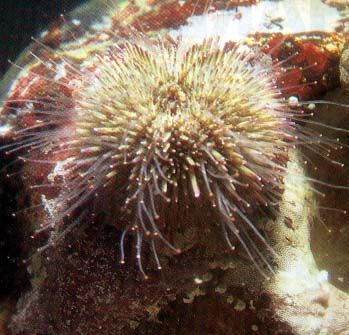 Most of the stranded animals, however, came from the sandy seabed offshore from the beach. These were much more exciting since many of them were sublittoral species not normally found on the shore and included burrowing forms rarely or never seen by divers. Most obvious were bivalve molluscs. The beach was littered with thousands of Otter Shells Lutraria lutraria and Razor Shells Ensis siliqua.

The otter shells in particular excited much interest and virtually everyone I spoke to on the beach commented on them, many saying they had never seen them before. They are deep burrowers, maintaining contact with the surface by their massive non-retractible siphons, and are normally safe from storms. Their presence in such numbers showed that the waves had eroded deeply into the seabed, exposing and washing them out. Other bivalves washed up included another deep burrower, the Blunt Gaper Mya truncata, fair numbers of the spectacular Red Nose or Spiny Cockle Acanthocardia tuberculata with its vivid scarlet foot, and the little circular white bivalve Mysia undata. About half a dozen other species were present in smaller numbers.

Together with the bivalves were the burrowing gastropods which prey on them. The commonest was the Large Necklace Shell Lunatia catena, some of which were still alive and would probably have been worth collecting for aquarium study. Also present were two burrowing predatory opisthobranchs. I found several dozen Philine aperta in pools near low water mark, looking rather repulsive like small grey slugs. 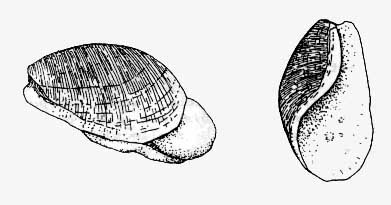 Much more impressive was a large Scaphander lignarius on the strandline, with it's large boat shaped shell streaked with orange.

Other burrowers included a variety of echinoderms. Most familiar was the Heart Urchin Echinocardium cordatum which frequently washes up in Torbay and occurs on the shore in some places. A few were freshly dead, but most were empty tests which had lost their spines, probably individuals which had died some time ago and remained buried in the sand until washed out by the storm.

They were much outnumbered by the starfish Astropecten irregularis, an elegantly symmetrical species with five orange arms fringed with spines: hundreds had been stranded.

There were also a few brittlestars Ophiura ophiura and the worm-like sea cucumber Labidoplax digitata.

Another group of species comprised animals which had lived on the surface of the sand. Prominent were Queen Scallops Aequipecten opercularis, and one or two Great Scallops Pecten maximus. Many of the Queen Scallops supported tangled masses of the calcareous tube worm Serpula vermicularis. Serpula was also present encrusting old whelk shells with Slipper Limpets Crepidula fornicata and a few Saddle Oysters Anomia ephippium. These shells had probably been inhabited by large hermit crabs: had they been empty it is unlikely they would have stayed on the surface of the sand long enough to gain such a rich encrusting fauna. The most likely inhabitant of these large shells would be Pagurus bernhardus, and this species was indeed present in fair numbers, although mostly as smaller individuals. Two smaller species were also present: Pagurus prideauxi with its symbiont anemone Adamsia palliata and the left clawed hermit crab Diogenes pugilator.

True crabs were well represented with 9 species washed up, including most of the common shore forms. Several species characteristic of sandy bottoms were present.

There were plenty of Masked Crabs Corystes cassivelaunus and Swimming Crabs Liocarcinus depurator, and a few Square Crabs Goneplax rhomboides. The latter animal, a rather extraordinary beast with long claws and vivid pink colouration, looked as if it would be more at home in a mangrove swamp. It is a burrower, constructing mazes of tunnels in the sand, from which it ventures out to feed. Goneplax washes up in Torbay quite often: much more unusual was a Circular Crab Atelecyclus rotundatus. This species supposedly lives in deep water, at depths greater than 12 metres: since the whole of Torbay is shallower than this there must presumably be an unusually shallow population here. Another unusual crab came to light after I got home, when I discovered a Pea Crab Pinnotheres pisum in the flesh cleaned out from some shells. This is a parasitic species living in the mantle cavity of large bivalves: I can't be certain which species it came from since it was found in the waste bucket, but it was probably Lutraria or Acanthocardia. 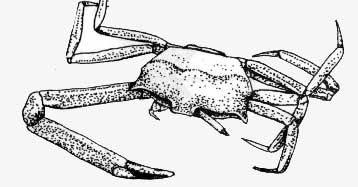 Other beaches produced much less variety than Preston sands, but some new species were found. At Goodrington Sands few otter or razor shells had been washed up, but there were plenty of spiny cockles. At Broadsands at the southwest corner of Torbay burrowing fauna was conspicuously scarce. There were many sagartiid anemones here, which had probably been living attached to stones and shells covered by a thin layer of sand. The real interest was opisthobranch molluscs. In addition to a few Sea Hares Aplysia punctata and large numbers of Philine aperta, hundreds of another shelled opisthobranch, Akera bullata had been stranded. These have a very delicate translucent brown shell that is so thin it can bend without breaking. Akera is known to occur in plagues in some years: presumably this was such an aggregation, possibly to breed - there were many spawn ribbons washed up with them, though these might have belonged to a different species. 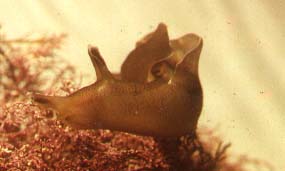 At the northwest corner of Torbay at Torre Abbey Sands, there were many live Heart Urchins Echinocardium cordatum, and the small Sand Crab Portumnus latipes, like a swimming crab with a very narrow carapace.

Live left-clawed hermit crabs Diogenes pugilator were much in evidence and apparently unaffected by the storm. In places the beach level had dropped considerably to expose patches of peat containing logs and a tree stump near low tide mark. This is the fossil forest bed, dating from early postglacial times when the sea level was lower.

Looking at the distribution of the stranded animals some patterns are obvious, but there are also some puzzles. Clearly Preston Sands took the brunt of the weather, with deep erosion of the sea bed which dug out even the deepest burrowers. To the south the depth of erosion decreased, so that at Goodrington only shallow burrowers such as spiny cockles were washed up in any numbers and at Broadsands the stranded fauna comprised mainly surface dwellers. The level of Broadsands beach actually rose, burying a patch of stones near the south end. At Torre Abbey Sands some erosion took place, exposing the forest bed and digging out many heart urchins.

It seems strange that many live Heart Urchins were stranded here, but so few were at Preston. This species can bury itself rapidly: perhaps at Preston they were able to burrow fast enough to escape harm. At Torre Abbey Sands, they may have been doomed by the forest bed which underlies wide areas of sand and would have prevented them from burrowing deeper. Other species were conspicuous by their absence everywhere, such as the anemones Peachia and Cerianthus, both of which are occur in shallow water and might reasonably have been expected.