I had previously attended a Porcupine Society meeting in October 1992 held at the Cornish Biological Records Unit (CBRU) at the Camborne School of Mines in Cornwall. On a bleak Sunday in October the Porcupiners visited the beach at Marazion. The conditions were awful. It was blowing a Force 8, twigs were breaking off the trees, the nimbostratus was making the morning almost dark, and this was before we got down to the beach by St. Michael's Mount. With the storm blowing off the Atlantic, there was no shelter, the sand-blasting could be mistaken for hailstones, and an occasional gust of wind could blow you off you feet.

The point of all this as far as biological recording is concerned is that we do not always have the luxury of a sunny day in a sheltered bay where we can leisurely examine what we find.

We were fortunate to be able to retire to the shelter of the CBRU to identify some of the smaller animals.

1) The weather conditions should be noted when biological recording because these may make a difference on the human ability to record what is present.
2) Laboratory facilities are very useful where the small beasties can be examined under a microscope etc.

An aquarium can be very useful for identification. It could be said to be almost an essential tool of the biological recorder on the seashore. The animals can be seen in close-up, out of the wind. The creatures need not be killed. They can be photographed and returned to the shore afterwards, or kept to explore aspects of their behaviour etc. Weed and hydroids can be brought back and the aquarist can watch for the small nudibranchs and other bugs that crawl out on display. 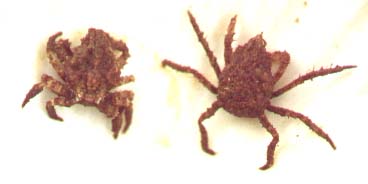 The talk is not about the technical aspects of aquaria, but about the advantages of the marine aquarium as a tool, and other aspects of biological recording.

Of course, the accuracy of identification relies on the ability and experience of the recorder. I then presented a series of photographs, mostly taken in aquaria, but with at least one taken on the shore. The purpose of this was to indicate even with ideal viewing conditions, an image blown up about ten times, or considerably more its natural size, on the huge screen in the lecture room, it is still possible to make mistakes. 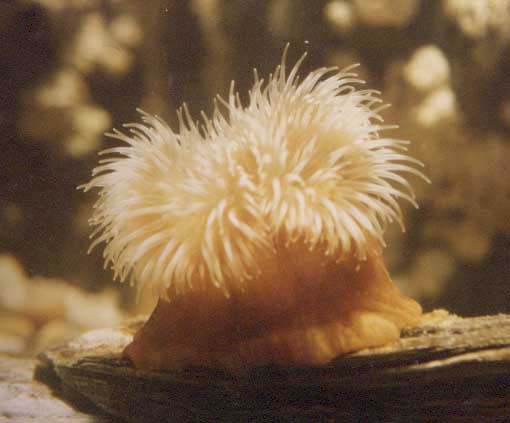 Can you identify this sea anemone?

There was no problem about animals behaving or looking unnatural if the marine aquarium was set up and maintained properly. This can be a problem with pickled specimens.

Another advantage of an aquarium display is that the life style of an animal can be examined. Aspects of the behaviour can watched and this helps identification in the field. I believe that an important point for biological recording is that a single description of a species in a fixed moment in time could lead to mistakes by duplication of names for the same species. The most obvious example was that the larvae of the Sea Lamprey, Petromyzon marinus, that was originally identified as a separate species called Pride, Ammocoetes branchialis, until its life style was investigated.

The advantage of a Lecture Theatre was that there was an additional screen where I could simultaneously project a list of  scientific names using the overhead projector. This avoids the possibility of a mistake with the pronunciation. The family of fishes called the Gobiidae were chosen, as recorders have difficulties identifying these fish to the species name, e.g. Pomatoschistus spp. But also, as this was the most interesting bit, is that my recent research had shown the Black Goby, Gobius niger, actually lost its elongated first dorsal fin spine over a period of six months. This was only one specimen so the observation is not sufficiently proven. My Porcupine lectures always take the form of a discussion, so I was hoping that other field workers had observed this fish and could let me have their observations. I was to be disappointed. As this is the elongate dorsal fin is a definitive identification characteristic from the description of the fish printed in books, if the fish does not always have this extended fin spine, it is likely to be identified incorrectly.

3)  A Marine Aquarium is indispensable to the serious biological recorder of intertidal and undersea life.
4)  Photographic records are very useful.

The final part of the Porcupine meeting involved a look at the Aquarium at the Southampton Oceanography Centre. Jenny Mallinson is in charge of the exhibits. There were some typical Black Gobies on display and I was able to have a look at them to try and determine the presence or absence of the elongated spine. I also tried to take some photographs as it was difficult to discern these details of a fish that invariably folds its dorsal fin down when it rests. Alas, my flash gun connection was playing up, again, and in the limited time the shots were not definitive.