Whereas, I do not enthusiastically share the vision of Moss for the River Adur and Port of Shoreham, I am not opposed to the scheme. The reason why I am not enthusiastic is because of the practical problems of the scheme seem too daunting and that pretty pictures will not reflect what will actually happen.

I am pleased that the major objection of the weir has been dropped.

I am not satisfied that there is sufficient wharfage and storage space in the canal section of the harbour to make relocation of the Western Arm existing port users, especially Cooper-Barnes (metal recycling), to be a practical proposition. I would like to be proved wrong as Cooper-Barnes is an unsightly introduction to the town from the east.
If Cooper-Barnes was to move this would make all the difference.
The idea of moving them to new proposed outer port on Southwick Beach, at best I can only see as a long term solution, and in all probability a non-starter. 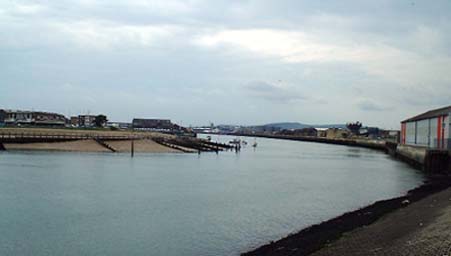 I do not see the other existing users as incompatible with any development in the short term. The number of ships now using the area is not even really a nuisance. They may actually be advantageous as the Port Authority would still have to maintain and dredge the river. 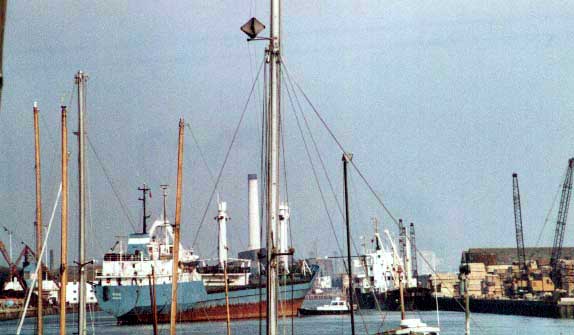 I would like to see (achievable in my lifetime) any development incorporated with the existing users, well some of them anyrate. This I see to be a more practical way forward.

I do not see the high density housing (by Shoreham standards) as a panacea. I see as a visual improvement, but I do not see it as a community, but as a transient area, where people only stay for a short time. Again, I would hope to be wrong. Whether I would like to move there would depend on the size of the rooms etc. and the price of the homes. If the density of houses was as high as the southern side of the river, I would see the density to be too high to be comfortable, only acceptable by city dwellers who are used to being crammed in.  Nothing to get excited about, but the location may suit some people, but could be an anathema to families because of the busy road and a 5.5 metres drop into the mud.

On the south side of the river there does not seem to a way for the public to enjoy the river views. They seem to all be incased in private property, understandably.

North side: there would seem to an area near the main road, which is not particularly favourable for homes, facing the dump (waste disposal area), so I have some reservations whether homes would be popular there. 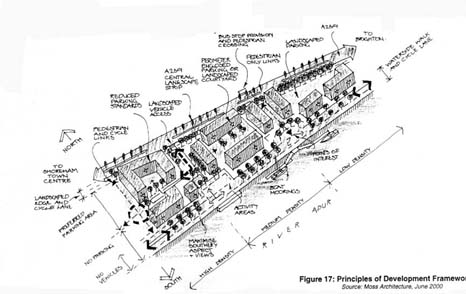 These are the flats in Moss Environmental's design plan for housing. They look like 1960s style buildings which fit in with the Roger's plan for high density housing, but even in the 1960s were quickly realised as generally unsuitable for living in. They have been used for social housing in the Adur District and have proved unpopular .

All these factors impinge on the viability of the whole scheme.

Bearing in mind that the Port of Shoreham is not a cross-Channel harbour because of the shallow approaches and this is not helped by the Channel Tunnel, I cannot see the Port extension at Southwick Beach being viable. (This would require more information). However, I do see a possible expansion of trade to the harbour from countries like Portugal. This prompts the question: is there enough wharfage to get rid of existing wharves?  THIS QUESTION HAS NOT BEEN ANSWERED TO MY SATISFACTION. This is in the Local Plan.

1) I would like to see the Port facilities reorganised so that the unaesthetic activities like aggregate dredging, scrap metal and other nuisances are relocated to the southern side of the canal.
2) I have an open mind about other port activities on the western arm, but I would tend to be wary of removing the port-related uses condition, until the wharfage issue has been resolved, bearing in mind the large cost of relocating existing businesses and the issue of who dredges the river.


3) There seems to be a shortage of office jobs in Shoreham, although an office development would seem more suited to the Ropetackle site (northern end), it would bring employment, and both sites (western Arm & Ropetackle) are accessible by public transport.

I would favour all the fishing activities to be concentrated at the Western
Arm, which would be a port related use, making use of the riverside frontage, suitable for the smaller vessels, which could allow extra space for the larger vessels in the canal. Whether or not such activities are compatible with homes is debatable, or whether it is worth the expense of moving? (may rectify any wharfage/storage problems).
This would give a genuine thematic tone to the area. But are there enough fish in the sea?

As mentioned at the meeting, a good place for a concrete Public Hard would be Silver Sands. As the harbour entrance moved, the hards are now too far from the sea. This would be in addition to the Ropetackle PH.  This would also allow, the number of parking spaces at Ropetackle to be reduced.

Put up a sign saying Shoreham-by-sea near the Lighthouse for travellers arriving from the east.

That will do for today.