This was caught from the shore in the Helford river on 11/09/05 by John Munday who is the President of the Redruth Sea Angling Association. It is about 20 cm long. The positive identification was made by Doug Herdson of the National Marine Aquarium at Plymouth. This bream is becoming more common now.

9 September 2011
A record angling capture of a Couch's Sea-Bream, Pagrus pagrus, weighing 4205 grams (9 lb 4 oz 5 drams) was landed on the west coast of Guernsey. Couch's Sea-Bream turned up in Guernsey waters in 1993 after a very long absence. Dr Jonathan Couch recorded one three miles off  Polperro in 1842. It is also known as the Common Sea-Bream. It is principally a southern European fish that has been moving north. Since its arrival in Guernsey waters it has been joined by the White Sea Bream, or Sargo, Diplodus sargus, and the Two-banded Sea Bream, Diplodus vulgaris. This fish is the largest Couch's Sea-Bream caught on rod & line in British waters. They grow to a size approaching 8000 grams.

Ray Fallaize caught a record Couch's Sea-Bream, Pagrus pagrus, on rod and line from a boat in Guernsey waters. His capture has been accepted by the British Record Angling Committee. It weighed 6 lb  9 oz  7 drams (3 kg).  Its total length was 560 mm and fork length was 495 mm.
The maximum weight for this species is over 7.7 kg. and the max length according to Fishbase is 91 cm.
This British caught fish finally exceeds the weight of the fish identified by Jonathan Couch in Polperro, Cornwall in 1842, which was 6 lb (2.72 kg).

12 March 2007
Commercial Guernsey fisherman Rick Ferbrache caught a 2466 gram Couch's Sea-Bream, Pagrus pagrus, off Guernsey's north-west coast in a mesh-ray net. The Pagrus pagrus had a total length of 54.8 cm measured to the tip of the upper lobe.  The fork length was 48.3 cm and the standard length was 43.0 cm.

31 December 2001
A Common Sea Bream (=Couch's Sea Bream), Pagrus pagrus, was caught by angler Stephen Condick on the Quies off Newquay, Cornwall. It weighed in at 2.218 kg and is a new British boat record for this species. This southern species of fish has been reported on a few occasions this year and it is breeding off the Cornish coast (probably) and at least one specimen has been caught as far east as Hampshire.
This British caught fish does not exceed the weight of the fish identified by Jonathan Couch in Polperro, Cornwall in 1842, which was 6 lb (2.722 kg).

17 June 2001
An angler caught a Common Sea Bream, Pagrus pagrus (=Sparus), out of Hayling Island. It is only called common because it is common in the Mediterranean Sea and south of the British Isles. 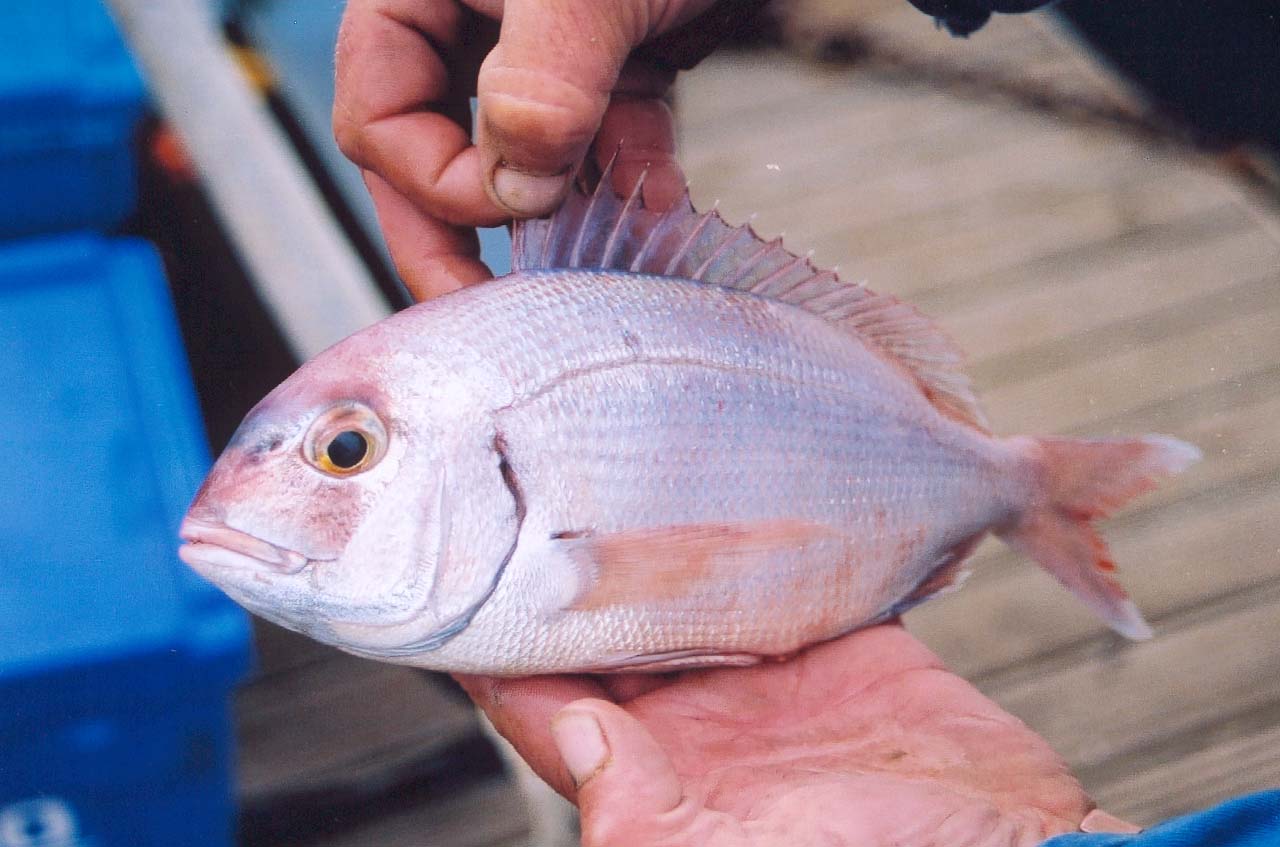 It was previously rare in the English Channel and unknown any further north. However, in the last two years a shoal of juveniles have been discovered in a Cornish bay and large numbers have been caught around the Channel Islands. This is the first record received of a fish as far east as off Hampshire.

and look in the Messages under Pagrus

One Guernsey trawler fishing overnight delivered over 800 Kgs. of fish this morning. 323 Kgs. was classified as mixed bait and were mostly starry smoothhounds.  From what I could see they were mostly pregnant females.  I bought one weighing 4.85 Kgs., which was one of the larger individuals.  The starry smoothhounds are congregating during high water on the South-West Casquet bank to the West of Alderney. The fisherman told me that he does not see them in any numbers at any other time (other than at high water).

I hear that the Cherbourg fish market "has lots of" smoothhounds and tope.

Small couch's sea bream, Pagrus pagrus, have been numerous so far this year. The Guernsey Fishermen's Trading Company says they have seen dozens so far this year.  Yesterday one fisherman operating a small trawler / potter landed to a retailer 16 all weighing about 12 oz. each. The neighbouring retailer in the Town Market had 6 small couch's sea bream delivered the day before.

Angling Records: (out of date)