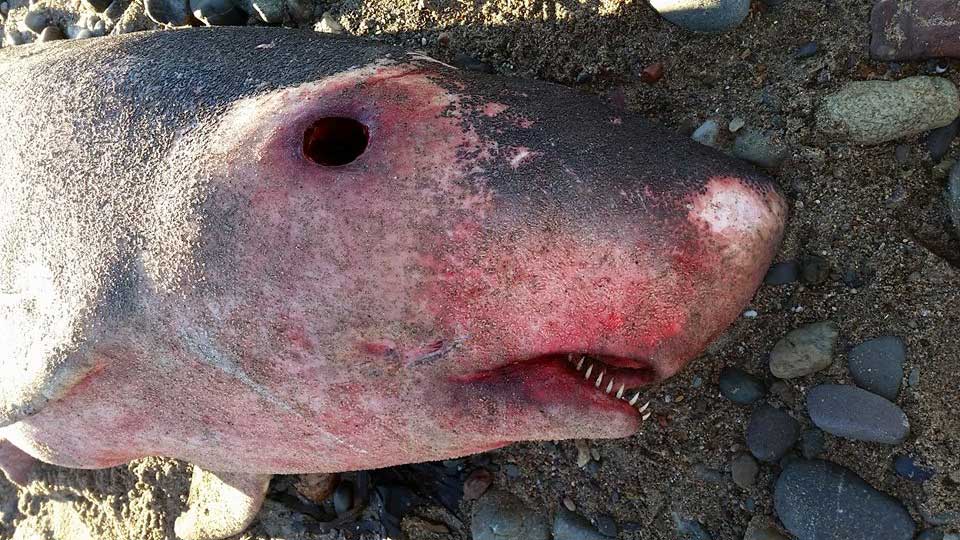 The Pygmy Sperm Whale, Kogia breviceps, washed up alive on Anglesey a week ago has now washed up dead at Dinas Dinlle Beach on the Welsh mainland coast, south-east of Anglesey. Cetacean experts were busy examining the corpse.

This whale is classified as a Vagrant in the British Cetacean List.

20 November 2014
Rescuers of a stranded cetacean on Newborough Beach, Anglesey, were suprised to discover a rare Pygmy Sperm Whale, Kogia breviceps, washed up alive on the sand. At three metres long it still look a team of people to transport the whale to the sea where it swam off successfully into deeper water. The Pygmy Sperm Whale is found in tropical seas worldwide but there have only been about a dozen records in British seas, mostly strandings as this whale is not often seen from boats.

3 January 2002
A 2.88 metres long female Pygmy Sperm Whale, Kogia breviceps, was washed up dead on Thurleston Beach in Devon. This is an extremely unusual stranding of a deep sea whale. Scientists from the Natural History Museum in London (Spokesman:  Richard Sabin) have taken DNA samples in an attempt to discover from which population this whale came from. The cause of death was unknown. This species is much commoner in the southern hemisphere. The presence of a population west of the Bay of Biscay is possible.

The body was secured by Lindy Hingley of Brixham Seawatch and PM'd in situ by the NHM on the afternoon of 4/01/02.  At the moment there is no suggestion that the animal died of anything but natural causes.
> >
> > I believe this is only about the 10th pygmy sperm whale known to have  stranded in the UK .
> >
Report from  James Diamond (English Nature)

Some international web sites with information on these whales
Papers on them
http://www.mosquitonet.com/~gcn/kogia5.htm#1

This whale is classified as a Vagrant in the British Cetacean List.