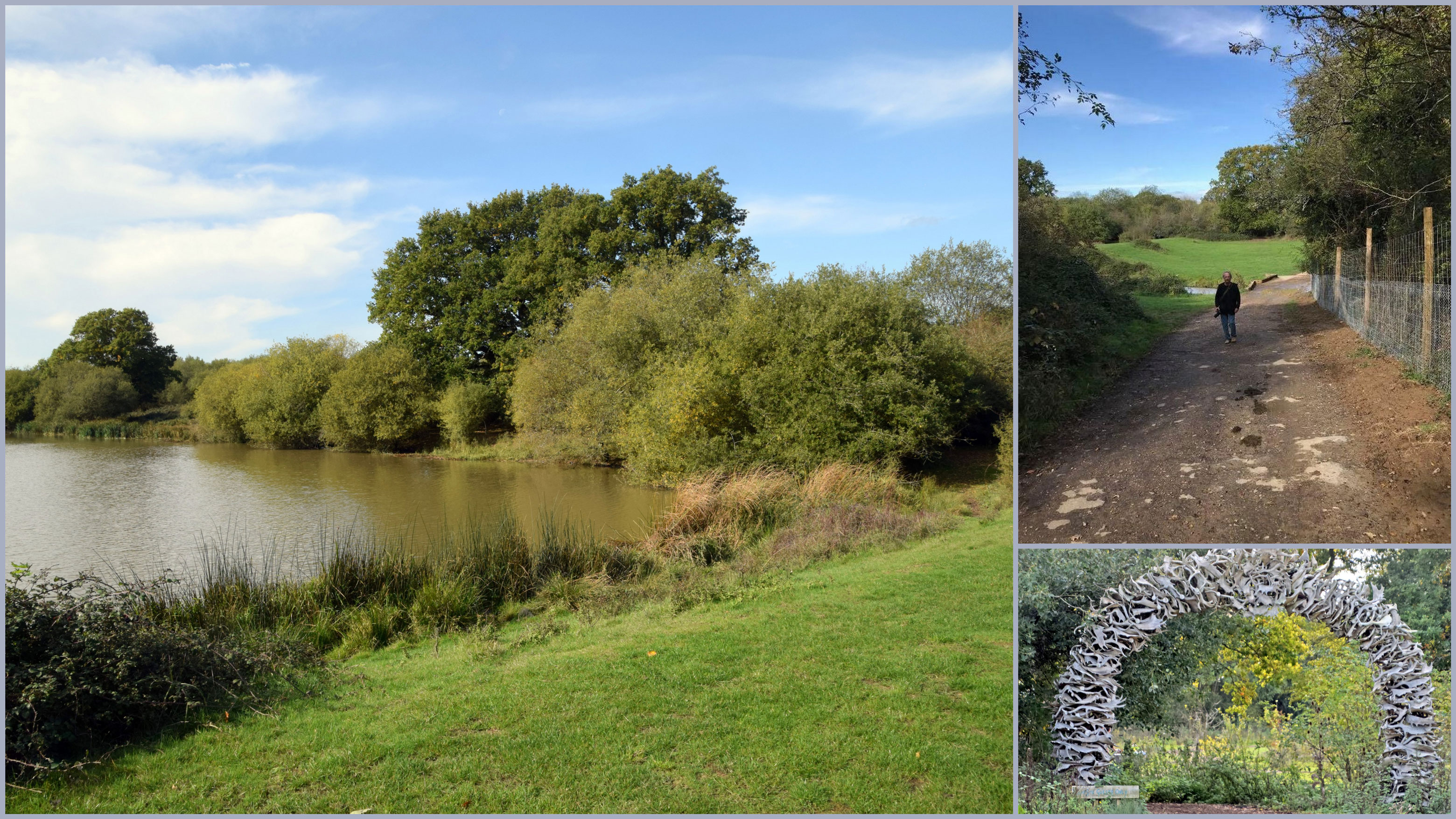 17 September 2020
The high spring tide condensed the waders, including 27 Lapwing, and also 13 Little Egrets on to the vegetated mud flats by the houseboats, River Adur estuary as it runs through Shoreham town.

15 September 2020
Eleven Oystercatchers perched all in a row on a sandbank by Ropetackle North in the calm sunshine. 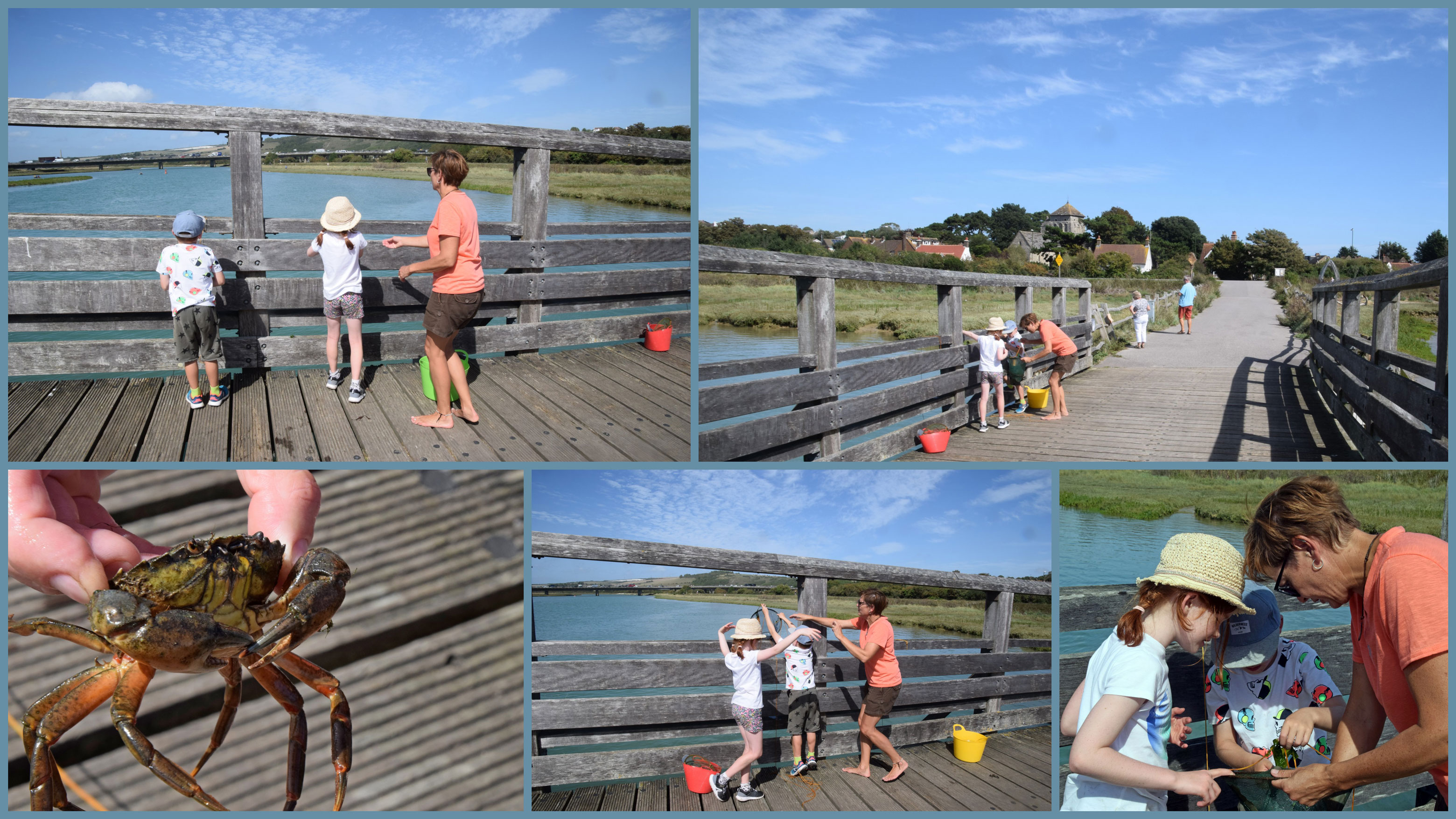 Fifty mostly adult Shore Crabs, Carcinus maenas, were attracted to the chicken bait in three small drop-nets in under an hour from the Toll Bridge at high tide on a sunny afternoon.

15 August 2020
A Cormorant was fishing in the narrow fast running channel at low tide seen from Coronation Green.

14 August 2020
Their squeaky call heralded as many as three pairs of Oystercatchers over the Adur at low tide between the Railway Viaduct and the Ferry Bridge. 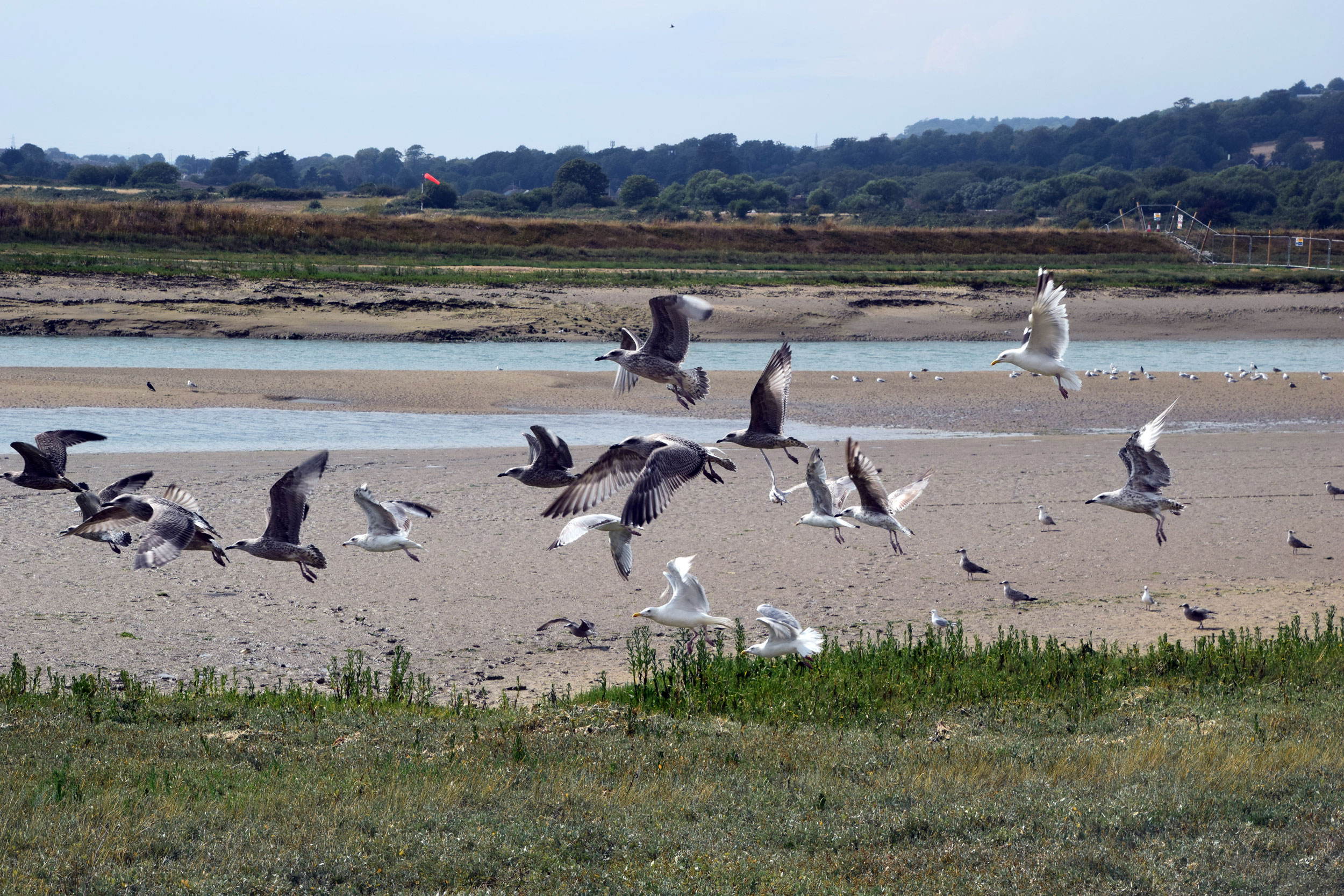 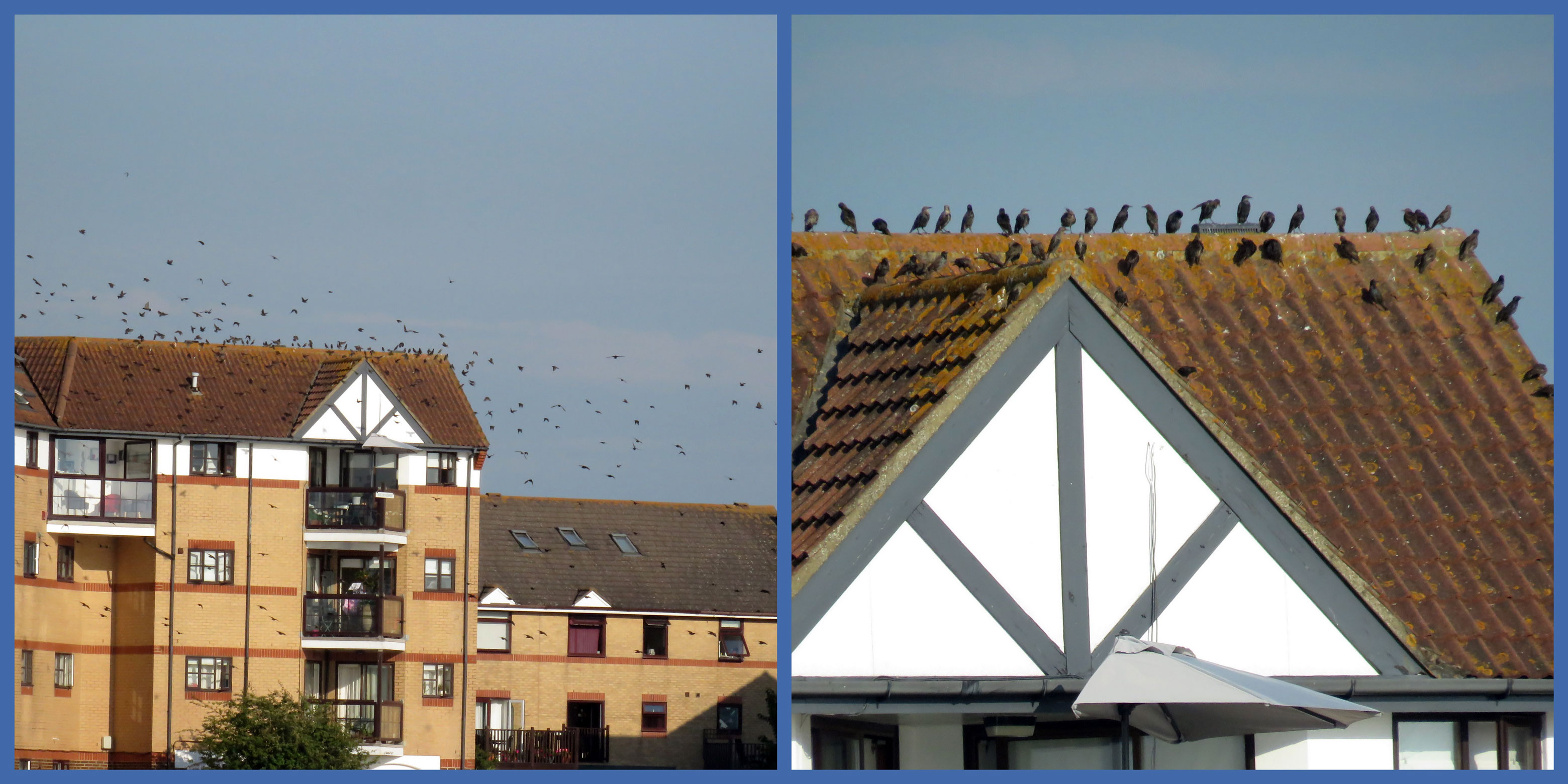 9 August 2020
A Kingfisher arrowed its rapid flight over the flooded River Adur by the Toll Bridge.

7 August 2020
The first winter Lapwing was seen back on the River Adur mud.

3 August 2020
I added two more species of butterfly to yesterdays tally of 19: a faded Comma and a bright Small Tortoiseshell, sharing the Buddleia bush with Red Admirals, on the western side of the South Downs Way bridge over the Adur near Botolphs.

11 July 2020
A Sparrowhawk obligingly stayed on the bow of Houseboat Thanet long enough for me to get some photos.

10 July 2020
All three Stork chicks had left the nest at Knepp this morning, and were foraging close to the nest tree. They all looked in very good condition and appeared very tolerant of us humans. At one point we also saw seven adult Storks using the thermals to gain height, spiralling out of sight.

9 July 2020
One of the Stork chicks at the Knepp Estate left the nest. This is the first Stork to have fledged in the wild in Britain in 600 years.

2 July 2020
The languid flight of the first of the year Ringlet Butterfly fluttered over the Downs Link Cyclepath verges, midway between Erringham Gap and the Cement Works, on a cool cloudy afternoon. A Red Admiral was spotted with its wings closed at the same time.
Adur Butterfly List 2020 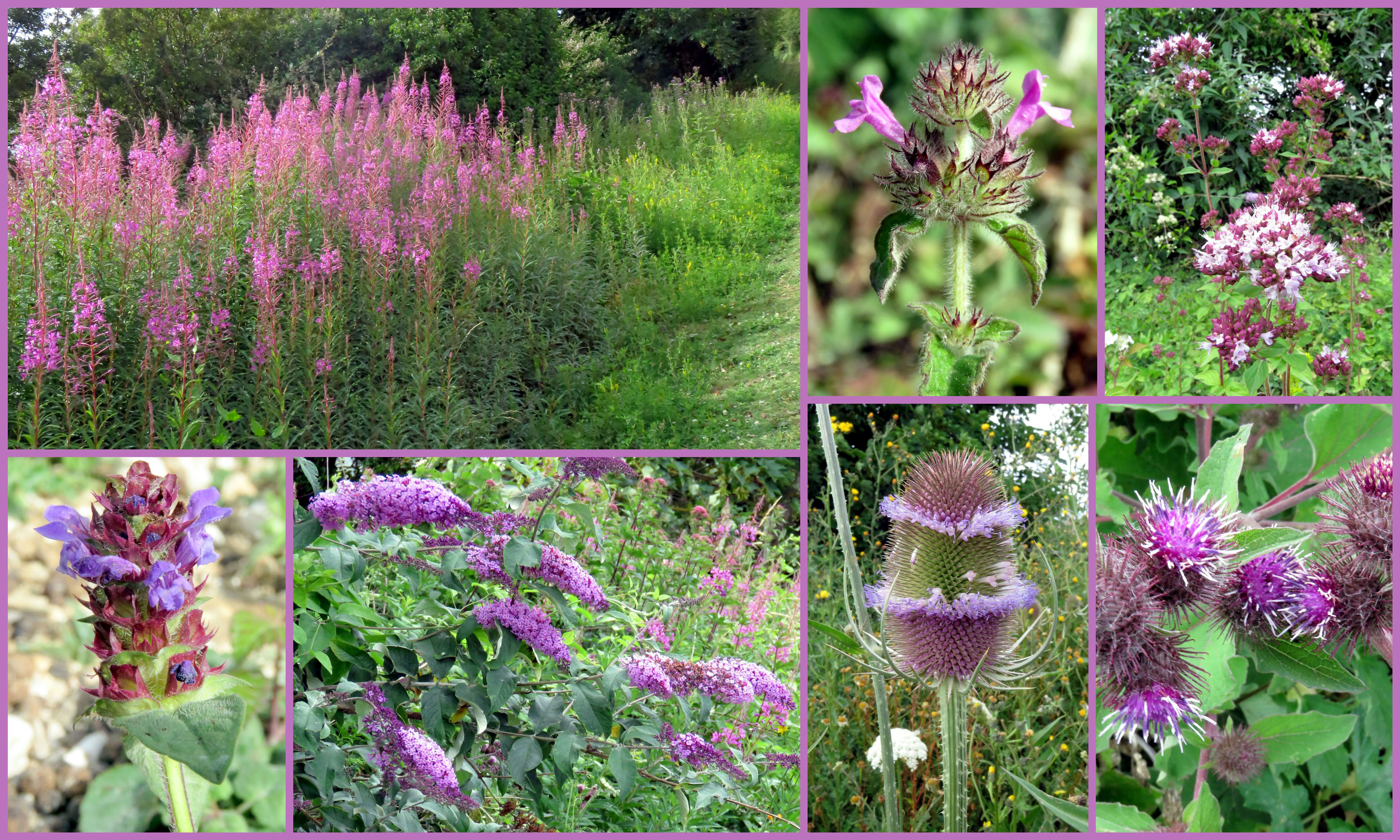 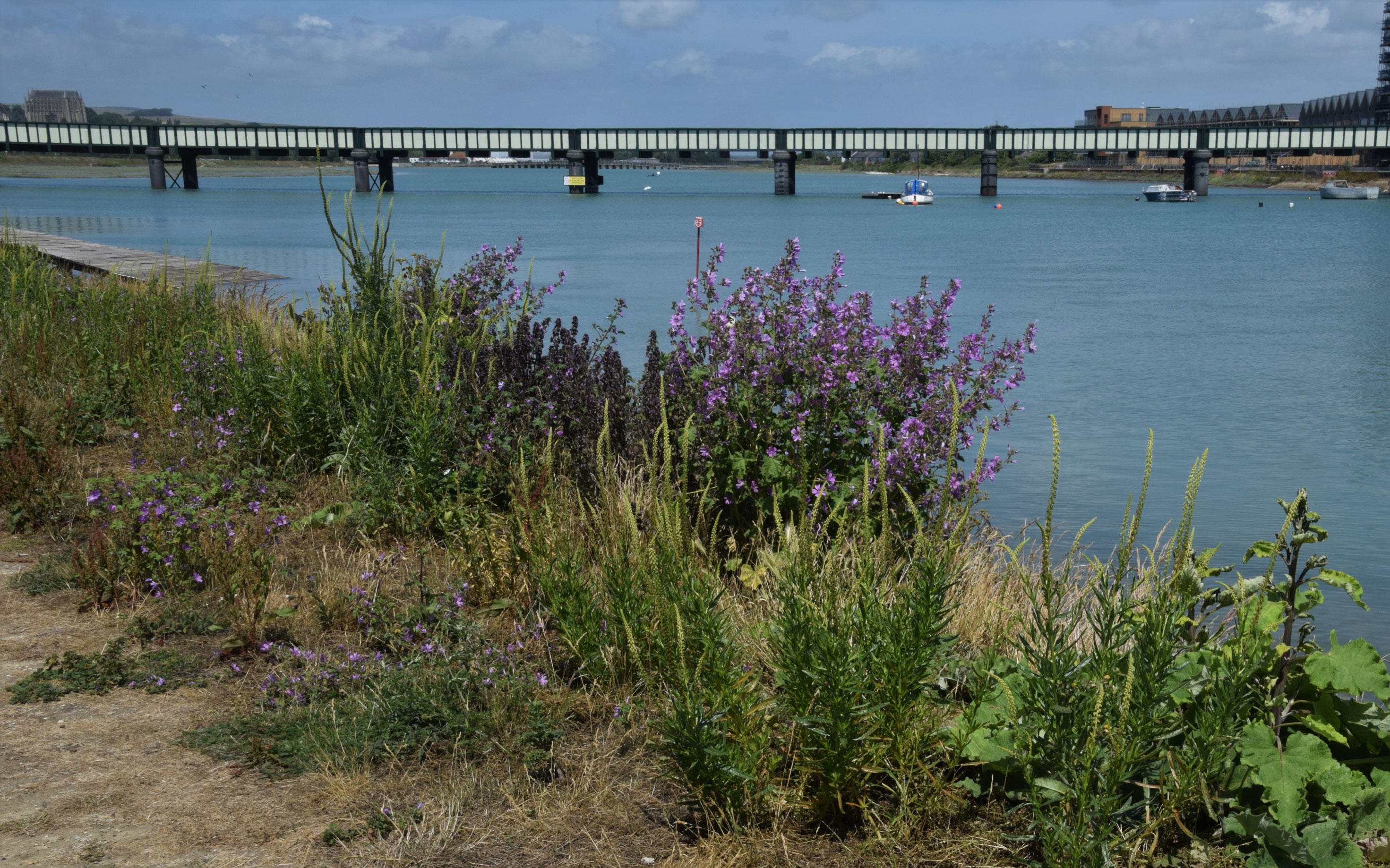 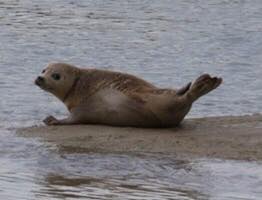 A young Common Seal rested an the River Adur mud at low tide in the morning in the middle of town. In the afternoon it was seen upriver near Cuckoo's Corner. 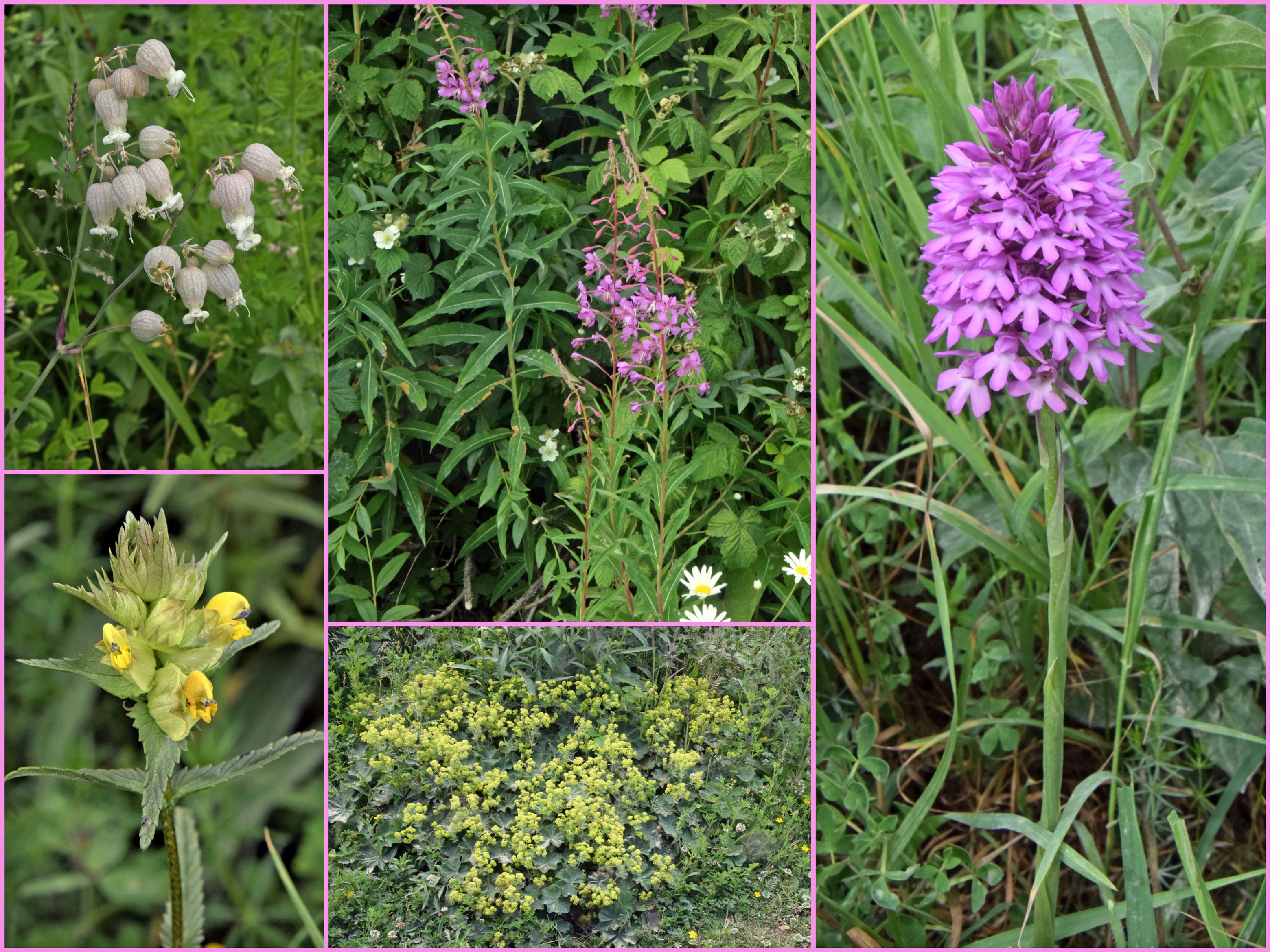 Amongst the dominant Ox-eye Daisies there were scores of flowering Common Spotted Orchids and scores of part-flowering Pyramidal Orchids as well as the first Red Bartsia. A large fly visited the Ox-eye Daisies. Initial identification of the fly was as the Four-lined Horsefly, Atylotus rusticus.
A young Field Vole was spotted out in the open in the meadows near the river.
Adur Orchids

31 May 2020
It was quite long for an impromptu Sunday cycle ride from Old Shoreham along the eastern towpath to the Bramber Levels, south of the village, and a return along the Coombes Road. A Yellowhammer flying into an Elderflower tree near Botolphs was the only thing noteworthy on the whole ride.

29 May 2020
My first Meadow Brown Butterfly of the year was spotted on the west-facing embankment of the Airport Towpath. This was an early record.

A couple of fluttering Holly Blue Butterflies attracted me to the Dogwood on the eastern verge of the Downs Link Cyclepath at Old Shoreham, when I then noticed my first Painted Lady of the year. This immigrant butterfly is much larger but was elusive to photograph in the late afternoon.

24 May 2020
Small Heath Butterflies (10+) frequently fluttered around a thistle patch in the north-east corner of Shoreham Airport. Welted Thistle was the only one flowering but plenty of prickles penetrated my trousers. The soil was dry but there was still Yellow Flag in flower by the perimeter drainage ditch. 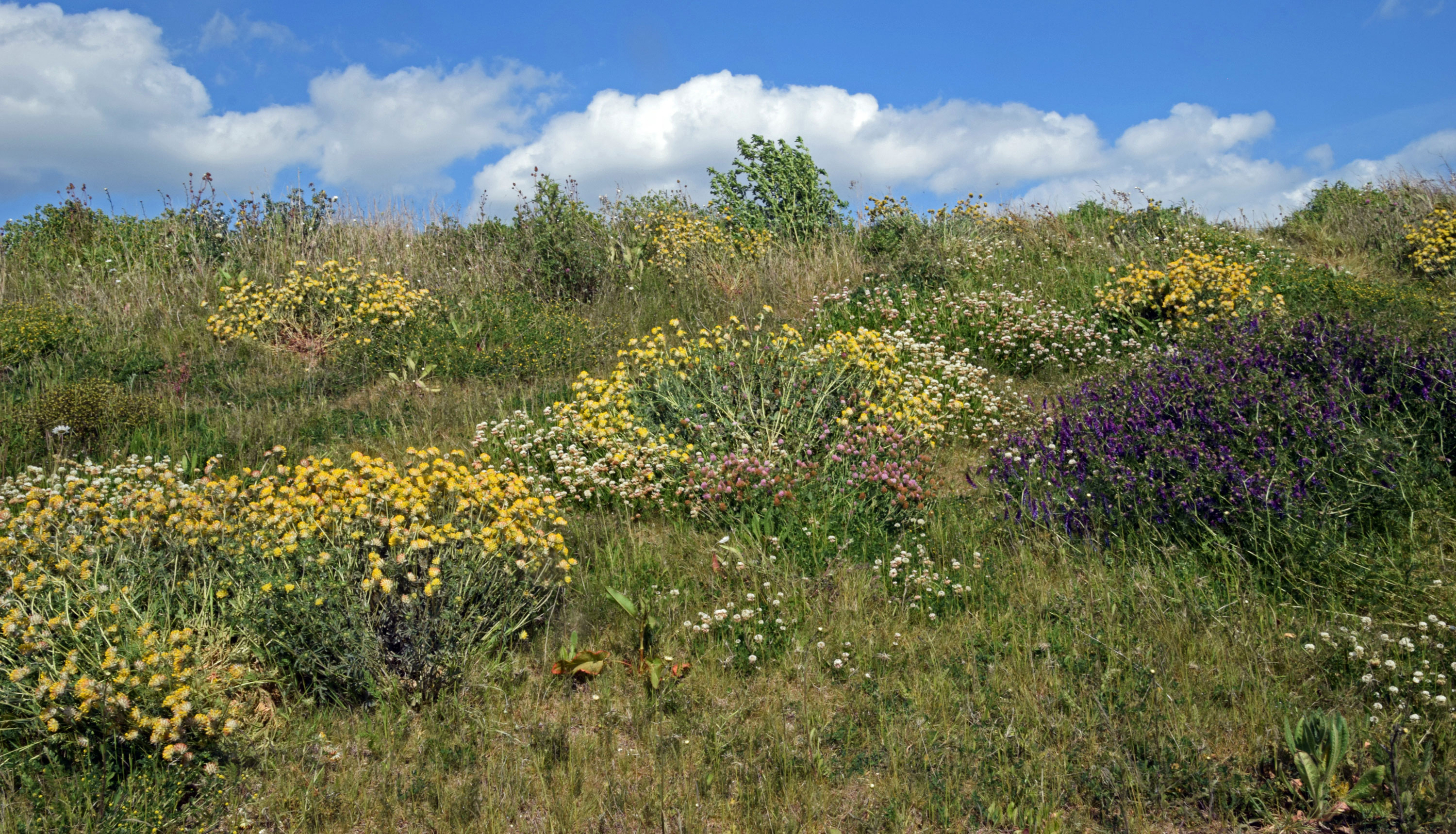 The reforming of the airport towpath created a new west-facing embankment which was colonised by the welcome sight of large patches of Kidney Vetch, with a smaller number of clumps of first of the year Melilot and Tufted Vetch, as well as clumps of White Clover and Hop Trefoil, scattered White Campion, occasional Red Campion, and two clumps of Mayweed. Most unexpected were the first shoots of Glasswort that appeared on dry sand next to the airport road Cecil Pashley Way.

21 May 2020
Wild Carrot was seen with its flowering umbel for the first time this year next to the path immediately north of Ropetackle North building site. Welted Thistle was next to it. 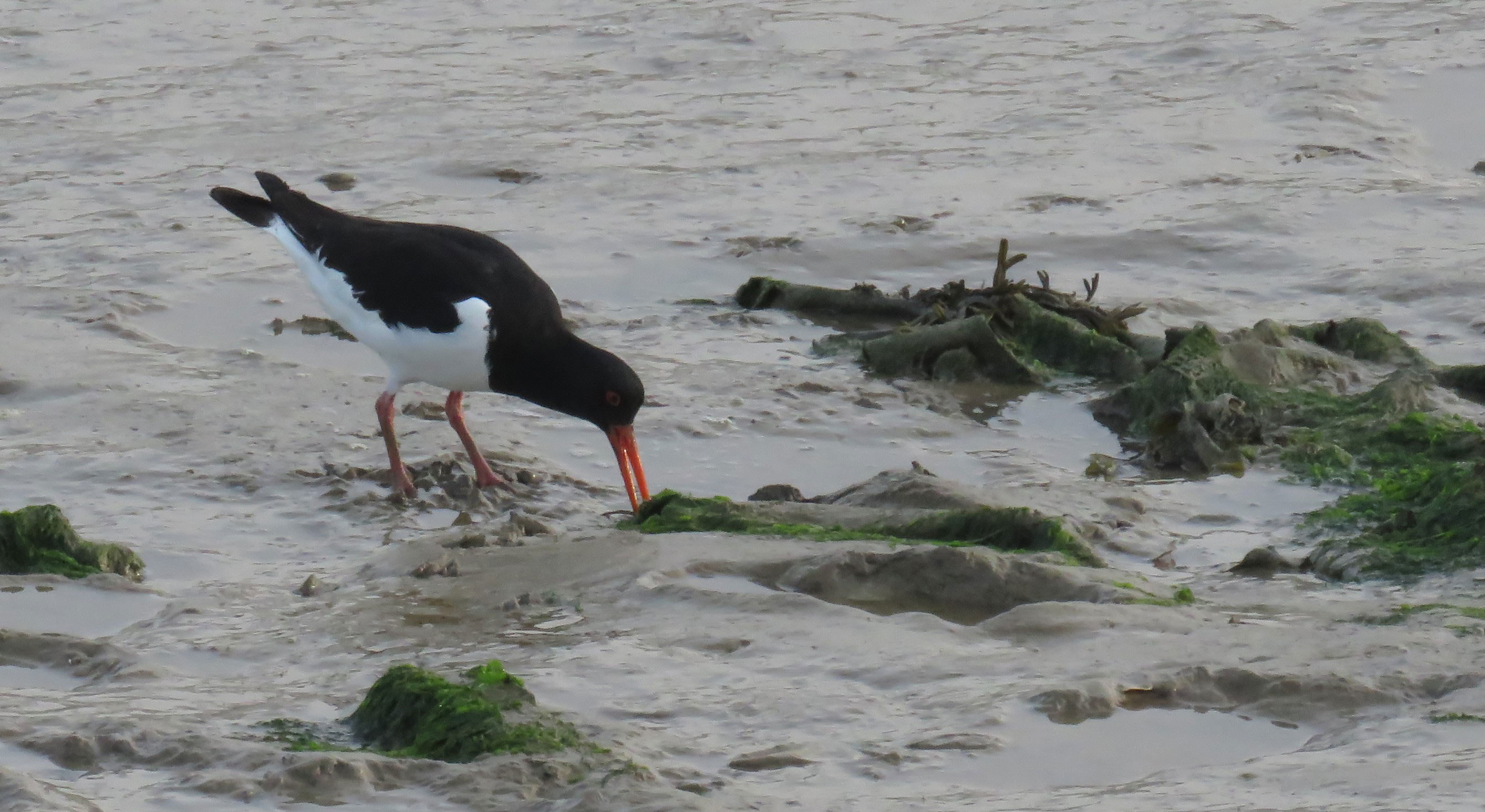 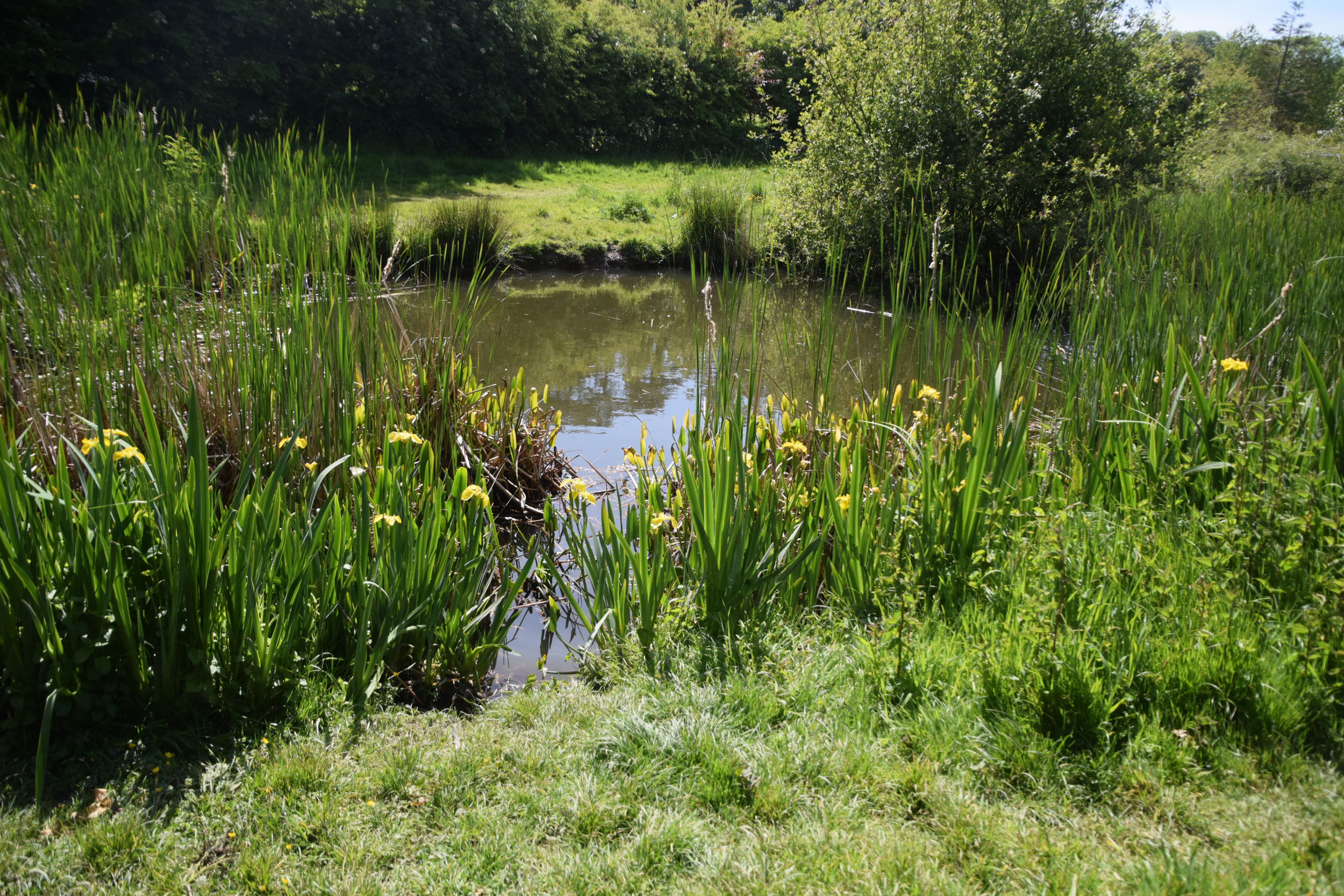 I cycled a largely uneventful trip* to Castle Lane Park in Bramber where there was a shoal of over fifty Rudd. On the way I inspected an old Ash tree in Bramber and unfortunately found occasional black wilting leaves which is a sign of Chalara Ash die-back disease. I also caught out a Jay before it dodged into the Downs Link hedges near the Erringham Gap.
(*Downs Link north, Coombes Road south.) 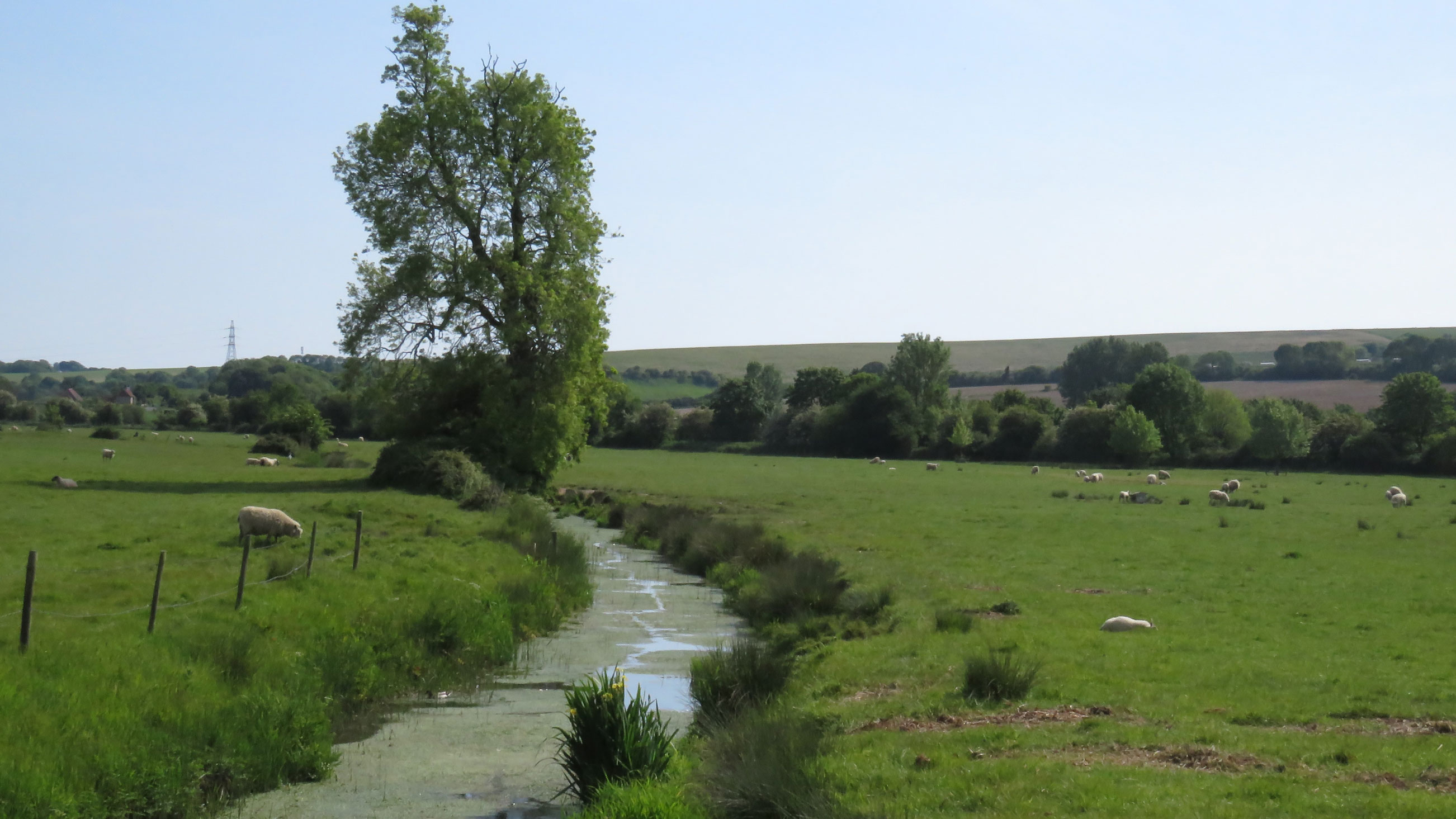 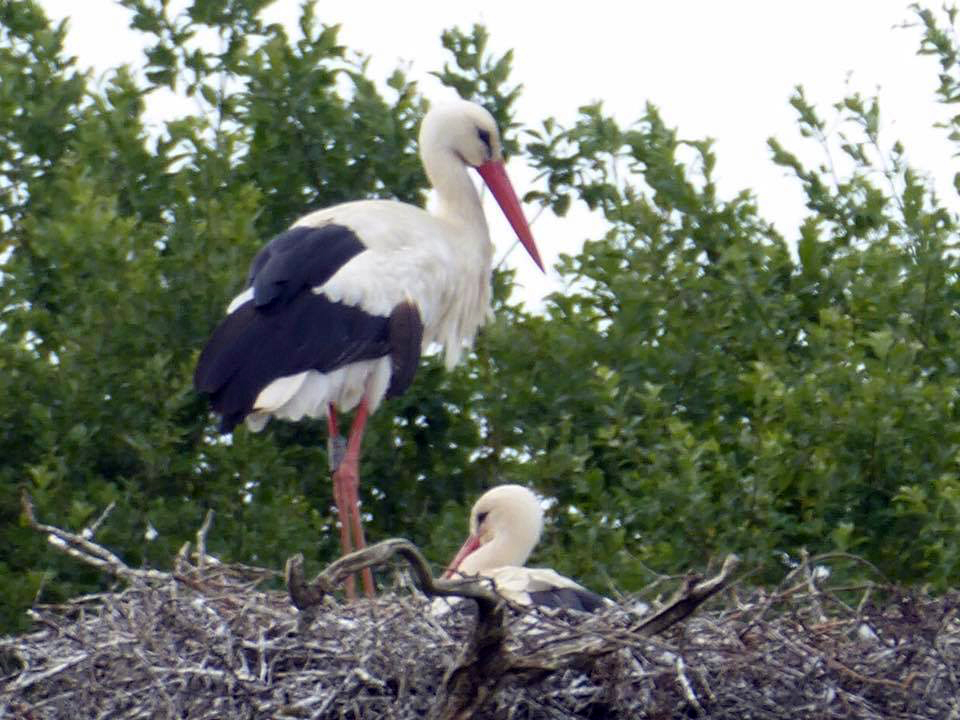 For the first time in over five centuries a pair of White Storks, Ciconia ciconia, living wild on the Knepp Estate, in the Adur valley, have seen the first egg of five hatch in their large new nest at the top of an old Oak Tree. This rewilding project was started with the introduction of a pair of adult Storks from Poland in 2016. However, the introduced female appears to have mated with a vagrant male bird. Three chicks have been seen.

Little Egret on the Adur on a low neap tide

Hawthorn was splendidly in blossom, best seen from the western towpath north of Old Shoreham. I think the peak blossom is yet to show though. Some trees were well past their best but others were just budding. Elderflower, Water Dropwort and Crosswort were seen for the first time in flower this year.
Adur Thorn

2 May 2020
A Short-nosed Seahorse, Hippocampus hippocampus, was a surprising discovery in a shallow rockpool in the River Adur estuary by the Scout Hut, Adur Recreation Ground. 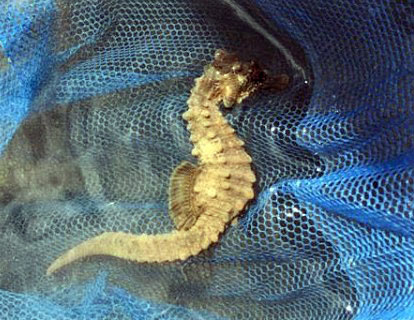 Two species of Seahorse are found in the seas around the British Isles: the Spiny Seahorse, Hippocampus guttulatus, is rare in the English Channel, recorded off Dorset and the western approaches mostly. The Short-nosed Seahorse, Hippocampus hippocampus, is occasionally found in deep water around the Channel Islands, unusual but widespread elsewhere. It was also recorded off the coast of Holland in 1998. This species is found in deep water off the Sussex coast, notably off Southwick, near Shoreham-by-Sea. My allowed cycle exercise took me a trip up the Downs Link only as far as just south of the disused Cement Works (before the path narrows). The idea was to see the plentiful display of Cowslips that adorned the verges. There was a chill to the north-east breeze and there was not much wildlife activity: a couple of Goldfinches amongst the still bare twigs and a few bumblebees visited the paucity of flowers. Wayfaring Tree was blossoming in the hedgerow bordering the Downs Link.
Adur Primula 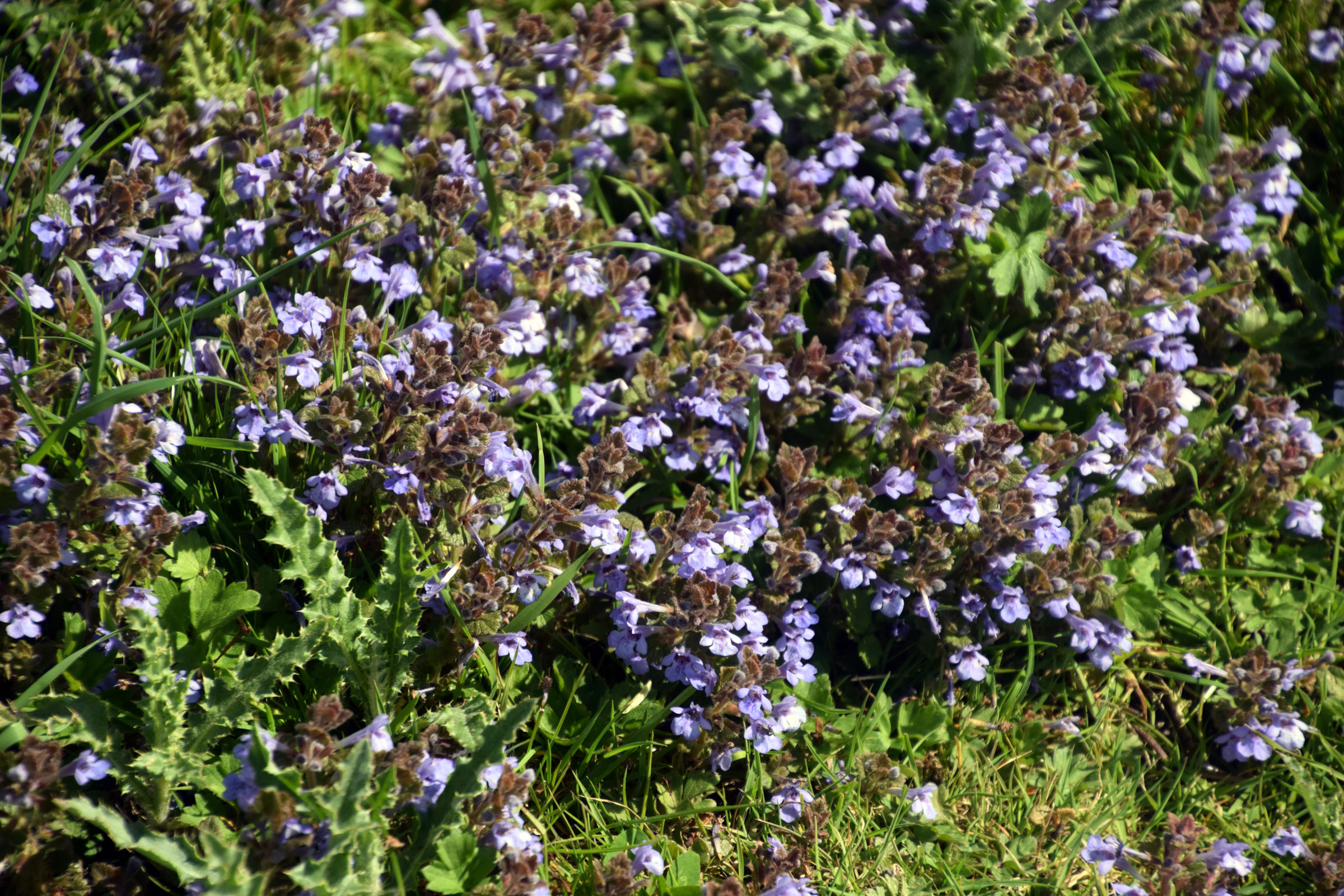 In the meadowlands between the cyclepath and the River Adur, I spotted my first fish of the year, a 3-spined Stickleback where the stream ran fast and clear underneath the Hawthorn. A pair of Mallards swam together on the main river at low tide. There was huge patch of Ground Ivy in the meadow. I was surprised by the fluttering and the flash of orange of a male Orange-tip Butterfly over the meadow where I had not seen one before. A few minutes later I spotted an all white female fluttering rapidly away..

10 April 2020
In the bright afternoon sunshine my first Speckled Wood of the year fluttered over the Waterworks Road. Activity was mainly Queen Buff-tailed Bumblebees and buzzing Spring (Hairy-footed) Flower Bees, Anthophora plumipes, attracted to the flowering White Deadnettle. Immediately on arrival I disturbed a Brimstone Butterfly on Spanish Bluebells. I stayed long enough (30+ minutes) for a male Orange-tip Butterfly and a Green-veined White to put in a fleeting unsettled appearance.
In the canopy Wayfaring Tree was blossoming with its white umbel-like flowers and Hawthorn was in green leaf as most of the early Blackthorn petals had fallen.
Adur Butterfly List 2020

7 April 2020
Brimstone Butterflies were fluttering around, notably in St. Nicolas Lane, Old Shoreham. My first of the year male Orange-tip Butterfly was unmistakable over the deserted Waterworks Road in the early afternoon. I was not sure about the three larger white butterflies that sparred with the Orange-tip? Almost certainly they were Green-veined Whites from a brief look and past experience. 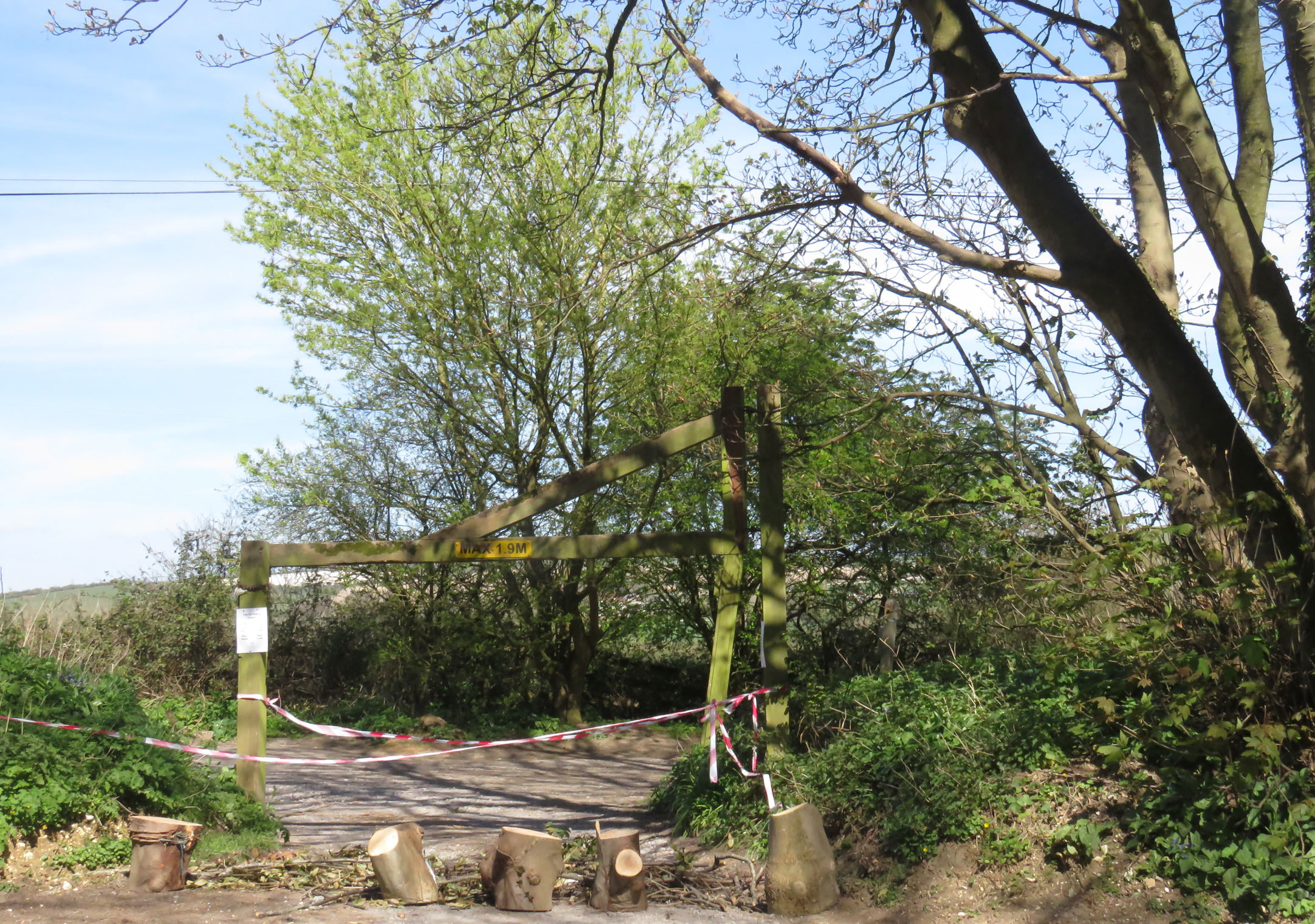 Blackthorn was flowering near the Scout Hut on the Coombes Road. Hawthorn was in leaf at Cuckoo's Corner where the first Garlic Mustard flowered by the side of the road. A female Pheasant suddenly whirred into flight from the verges approaching the A27 traffic lights from the north.

19 March 2020
Blackthorn was flowering in the Waterworks Road, Old Shoreham, one bush ahead of the rest. Yellow Archangel was flowering on the eastern verge.

A Whimbrel was spotted on the River Adur, It was an unexpected and unusual occurrence in the centre of Shoreham town, seen on the mussel beds from Coronation Green. 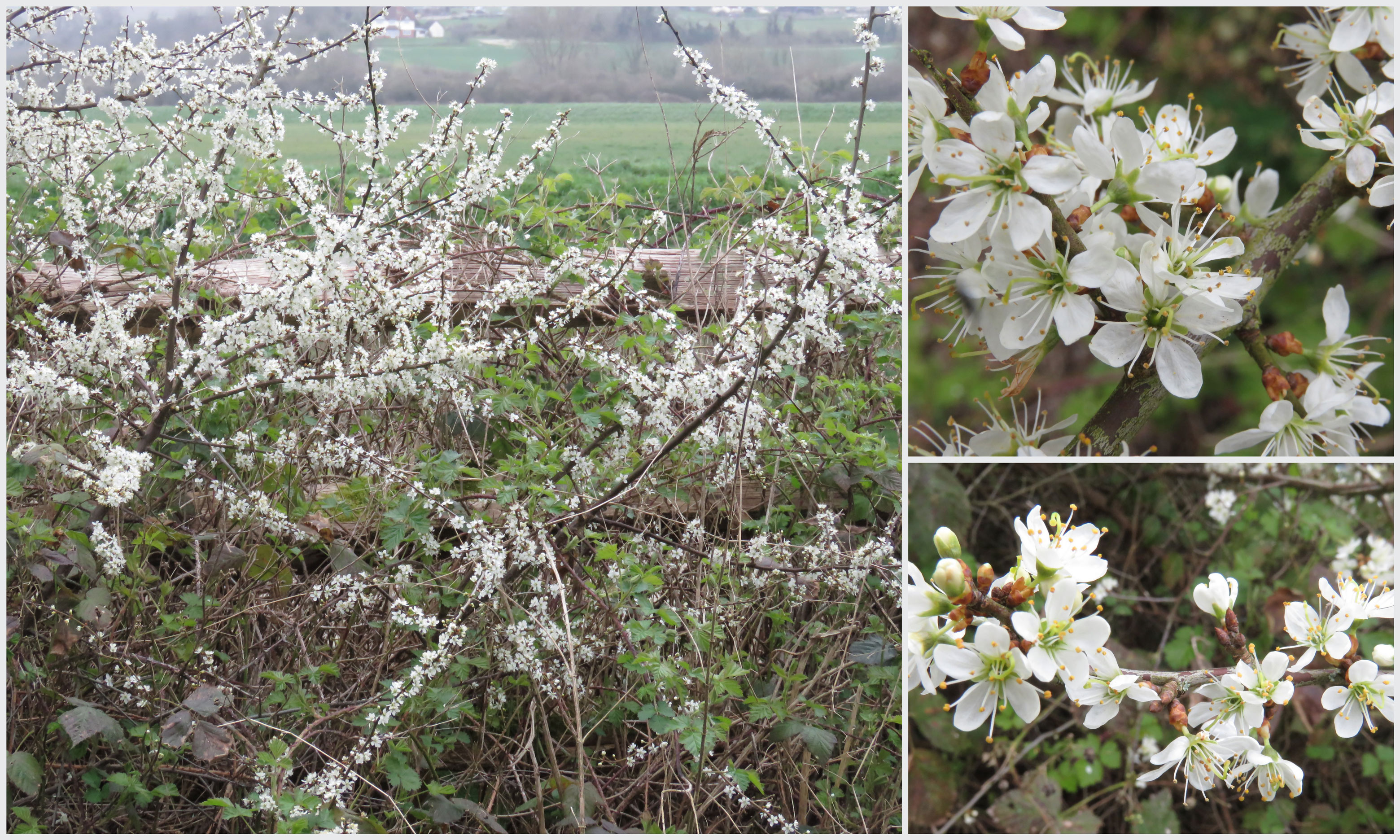 At Cuckoo's Corner, the Blackthorn bush was profusely in flower.
Adur Thorn 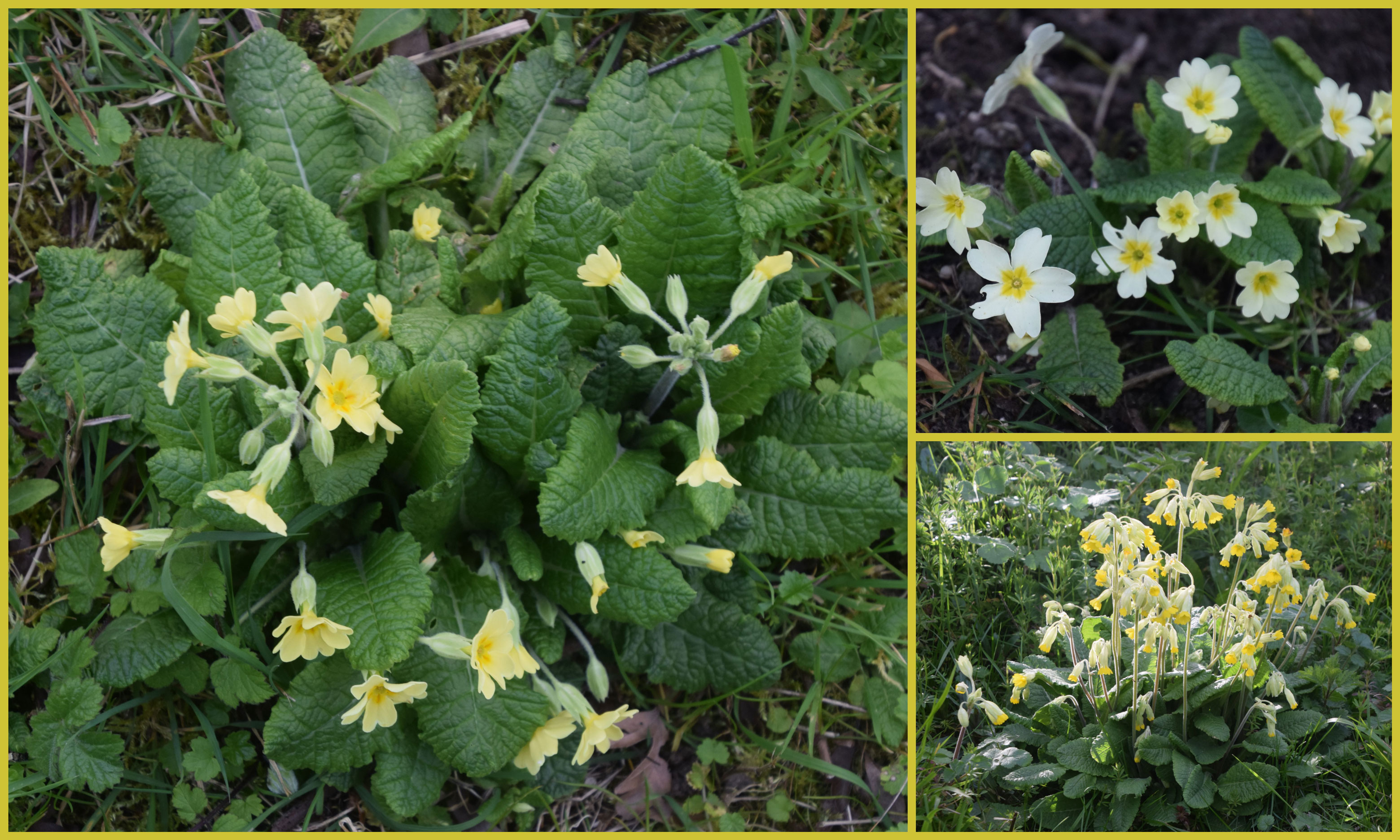 There were no Lapwings on the exposed mudflats of the River Adur at Old Shoreham, just scores of mixed gulls. Under foot the mud squelched virtually everywhere with gulls attracted to the standing water on the low lying fields on each side of the Downs Link between Old Shoreham and the Cement Works. Coltsfoot was seen in flower for the first time this year in its usual place on the edge of the cyclepath south of the Cement Works. 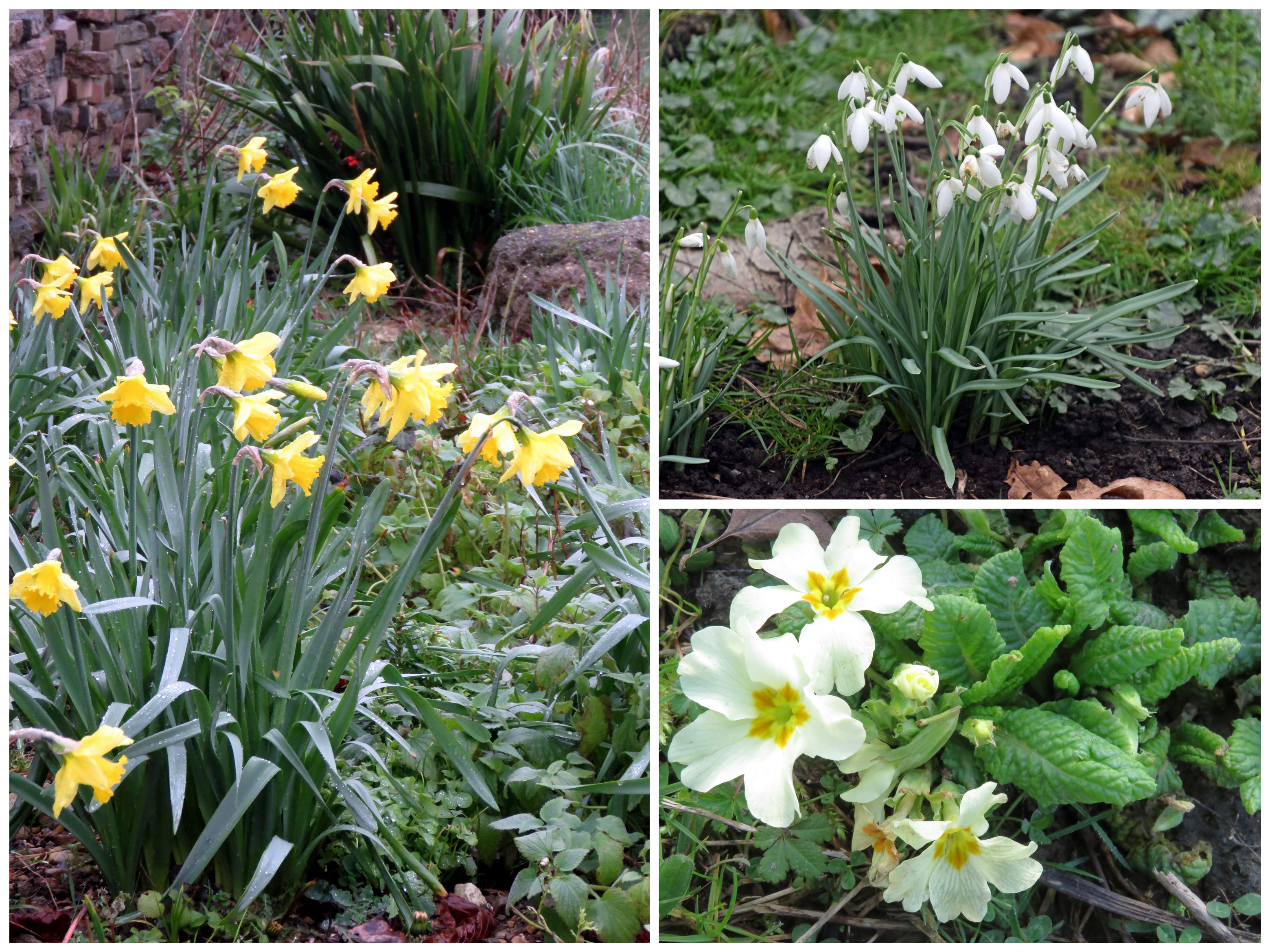 The best place to see thousands (hundreds of clumps) of Snowdrops was on the verges of the Coombes road to Botolphs where the first few flowers of Lesser Celandine were just appearing. Two clumps of Primroses graced the verges of the Downs Link north of Adur Flyover. Dandelions and White Deadnettle were noted flowering on the Downs Link verges near Botolphs. Oxford Ragwort flowered near Shoreham Railway Station. The Waxing Gibbous Moon could be seen in the east in the afternoon blue sky. 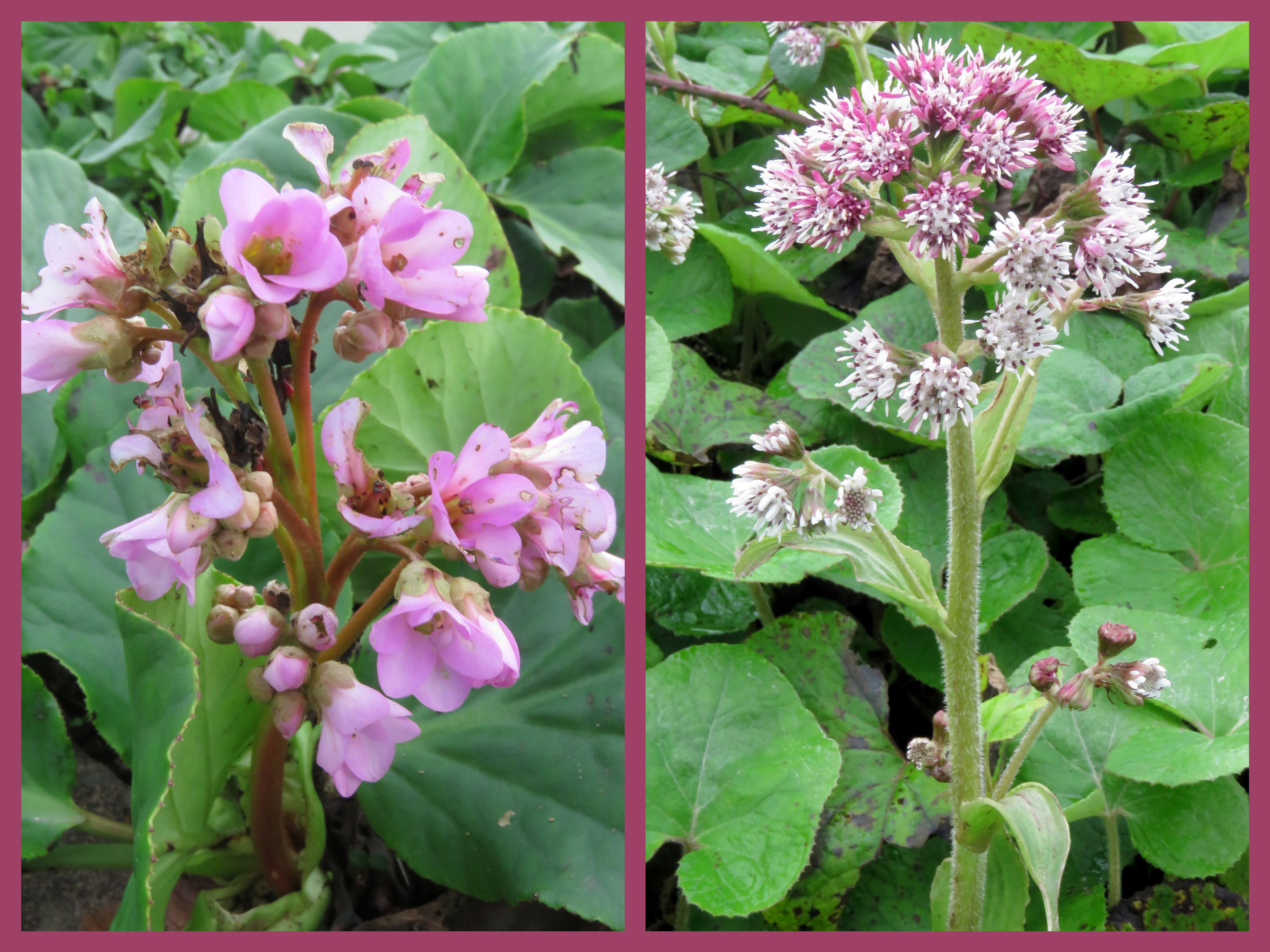 Adur Recreation Ground (map) is land reclaimed in the early twentieth century from the River Adur estuary from mud flats called Scurvy Bank. This involved the deposition of soil from out of the local area to create a new mown grass habitat with the addition of planted trees and Poppy and other flower beds. In more recent years, more soil was introduced in the form of a long raised dyke on the eastern perimeter, and with this new soil came non local wild and naturalised plants from seed.

There were Arthur's Cakes and yellow bracket fungi on tree stumps on Adur Recreation Ground near the Adur Activities Centre.