Notes on the sizes of  Homarus gammarus

The Lobster is the largest and strongest of our native crustaceans. Undisturbed, its life span may reach 15 years, or more. When caught in pots, the usual size is from between 23 and 38 cm (9 - 15 in), weighing between 0.7 and 2.2 kg (1.5 - 5 lb). The legal measurement is the carapace only.  The minimum legal size (in Sussex waters) is 85 mm (3.5 inches, carapace length). The length excludes the claws and telson (tail) so the lobster appears much larger.

Lobster fishing is strictly controlled with a licence needed if you capture more than two specimens in one day.
by Len Nevell
According to the Guinness Book of Records the largest specimen of the larger American Lobster, Homarus americanus, measured 1.06 metres (3 ft 6 in) from the end of the tail-fan (telson) to the tip of the largest claw and weighed 20.14 kg (44 lb 6 oz). It was caught off Nova Scotia.

The length that the European Lobster will normally grow to if it is not captured is a total length of 50 cm, weighing about 5 kg (11 lb). A lobster of this size may be 20 years old. 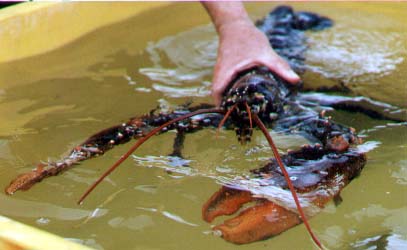 A large Lobster at the Shoreham-by-Sea display 1999. Lobsters of this size, nearly 4 kg (8 lb), need to be supported if lifted from the water.

John Barker captured  an exceptional lobster by hand (or rather, two hands) underneath the Palace Pier at Brighton in 1963 which weighed 3.85 kg (8 lb). It was put on display in the old Brighton Aquarium.
In the last century, in 1875, a 6.4 kg (14 lb) Lobster was caught in a trammel net off south Cornwall.
In 1877, a 5.4 kg (12 lb) Lobster was captured in Saints Bay, Guernsey, Channel Islands.

American Lobsters have been captured off the Devon coast in the first part of 1996. It is thought that they were discarded from the galleys of cruise ships.

The biggest recorded in Norway was caught outside Bergen and weighed 5.3 kg. The biggest crushing claw of a lobster ever found was calculated to have been from a specimen that weighed about 9.3 kg. This claw was trawled up outside Skagen, Denmark in 1964. It was caught in 40 metres of water and the claw was 351 mm long.
Cheers
Pål Enger (Norway)
Postscript:

Norwegian Lobsters
The biggest crushing claw of a lobster ever found was calculated to have been from a specimen that weighed about 9.3 kg. This claw was trawled up outside Gilleleje, Denmark in 1974. It was caught in 20 metres of water and the claw was 364 mm long.
In March 1988, a European Lobster weighing a record 10 kg (22 lb) was caught off the west coast of Norway, near Floroe. I have been unable to find out what happened to this specimen, so there may be some doubt to the authenticity of this record.

At the beginning of  December 1998 a male Lobster weighing 6.12 kg (13½ lb) was caught by David Spiers 4 miles out of Eastbourne, Sussex. The exoskeleton was covered in the limy tubes of the Keelworm, Pomatoceros triqueter.
On 15 December 1998 it was transferred to the Brighton Sea Life Centre.
It is being kept in the large Tope tank with shoals of mackerel and rays, with plenty of rocks to hide under. This huge tank undergoes water replacement at 2%, or more, every day. 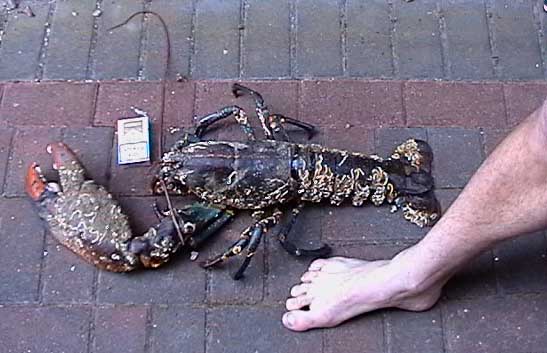 22 June 2003
We captured a large Lobster, Homarus gammarus, off a Portland wreck which weighed about 6 kg, but it only had one claw. The human foot in the picture is size eleven. Specimens over 6 kg are only occasionally caught incidentally in other fisheries as large lobsters cannot get into the pots. They are often covered in Barnacles and keelworms.
Report by Paul Harrington

Looking into the lobster bays is a real education, with about 50% being right handed (the side of the crushing claw) with the rest left handed. Others seem to have a variety of claws that are not easily identified as crushing or cutting, but between the two. Colours vary from almost black to a very light shade of blue with some being pink.from Bob Alexander  (Weymouth) 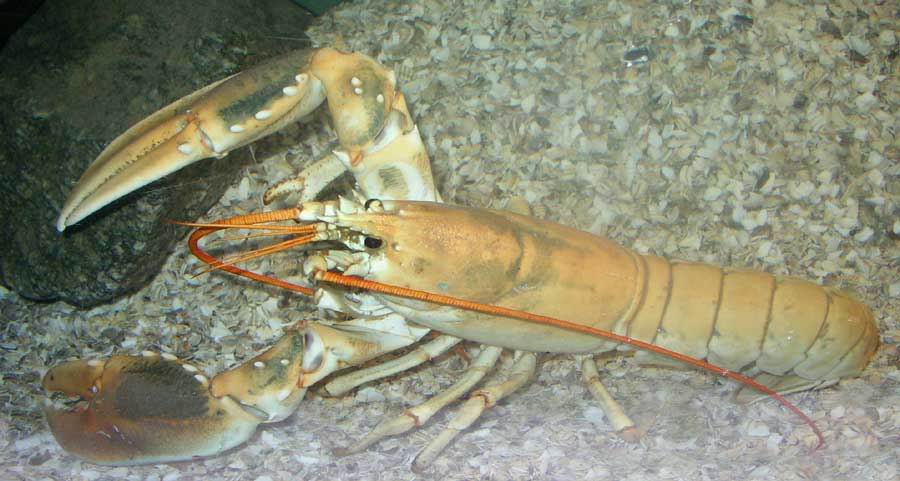 The unusual lobster was kept alive in his vivier, until put on public display in the Guernsey Public Aquarium on 10 September 2003.
Report from Richard Lord (Guernsey)


17 May 2001
Fishermen Peter Gay and Peter Drelaud caught a red Lobster, Homarus gammarus, off the south east of Jersey, in April. Fisherman Ian Stewart who caught one in 1971 (this may have come from the English Channel N.J.) said that he understood the last locally recorded case was 1920. The Lobster was sold to an aquarium at St. Malo, France.

I live on the Isle of Man which is a small Island located in the Irish sea between England and Ireland. A friend of mine who is a professional fisherman caught a lobster which is half male and half female. It has 2 distinct colours, one side black, the other orange. He understands this is very rare and to his knowledge this is the first time one has been caught in these waters. Could you supply any details of who would be interested in this ? The lobster is being kept alive for the moment pending any genuine
interest

As head chef of the Kaspia restaurant in London's Mayfair, William Cooper knows a lobster when he sees one but was overawed when he arrived one morning to find a European Lobster, Homarus gammarus, nearly one metre in length sitting in his kitchen! (pic)

This lobster had arrived at the restaurant as part of a regular seacatch delivery from off the Cornish coast and was to be boiled in the pot that afternoon.  However, he was saved from this obscenity by Mr. Cooper himself.

Mr.Cooper said, I have seen plenty of Lobsters in my time, but I knew this was special. It was too big and too beautiful to cook. I couldn't bring myself to do anything with it so the only thing I could think of was to call the London Aquarium and see if they could take him in.

On 18 October 2001, this Lobster called "Barney" was released into the Plymouth Sound Marine Conservation Area.

The lobster is certainly thought to be the longest in Europe and the second largest in the world at a length of 96 cm. The longest previous recorded Lobster in the world (a North Atlantic Lobster, Homarus americanus) was caught in 1977, measured 106 cm  from the end of its tail-fan to the tip of its largest claw and was caught off the coast of Nova Scotia, Canada


American Lobsters in the NE Atlantic

June 2002
An American Lobster, Homarus americanus, was discovered captured by a fishing vessel on a boat out of Selsey, West Sussex. A few specimens have been caught before in the approaches to Southampton Water.

17 March 1995
A North American Lobster was brought up in a pot with a European Lobster 30 miles south of the Isle of Wight by a south Devon boat. It is a berried female and was taken to the Marine Biological Association at Plymouth where it has been put into quarantine until the eggs are hatched and will be put on view to the public in their Aquarium later. The claws are a different shape and reddish on the underside and the rostrum is rather longer than on the European Lobster.
Cornish Marine Life Records (Ray Dennis) 1995

Reptantia Crustacea:  Suborder of the Order Decapoda: walking demersal decapod crustacean, e.g. European Lobster.
This suborder has been discontinued because of changes in the classification, but it will still be found in the old books and even in university marine biology courses.
True Lobster Homaus gammarus is now to be found in the Infraorder Astacidea.

Reconstruction Work:
Demolition of part of a jetty; found under a caisson, which is a case for keeping out water while the foundations of the jetty were being built.