My first Wall Brown Butterfly of 2008 and my first Red Damselfly were both seen near and in the copse of Mill Hill. The first Brimstone Butterfly was a bright yellow male seen over a clearing in the scrub, and then a bright yellow male and white female appeared to be courting under the canopy of the copse at the top of Mill Hill, until another yellow male came and competitively interrupted the proceedings. Whereupon the female disappeared and the males carried on jousting.
Adur Butterfly List 2008
Adur Dragons & Damsels 2008


14 December 2005
Nothing of note was seen. The Beech leaves on the diminutive trees turned a golden brown under a leaden sky to the north on a  warm (air 9.8° C wind chill 7.9° C) afternoon for December.

3 July 2005
A magnificent dragonfly settled on a pine tree on the southern edge of the copse on the top of Mill Hill. It was a female Southern Hawker looking very fresh and dangerous to other insects. My impression was that this was possibly a different dragonfly species to the one seen on 1 July because it was not quite so active on its patrols and this one appeared slightly smaller with less of a green thorax. However, these differences could be explained by my failure to get a good look at the first one. I now think it is most likely the same species.

Migrant Hawker, (originally misidentified as a Southern Hawker)
This dragonfly was well camouflaged two and half metres up in a pine tree

When this dragonfly flew off a Red Admiral Butterfly and a Common Blue Damselfly showed.

1 May 2005
An Andrena bee was noted on a Dandelion in the copse at the top of Mill Hill. White Campion was starting to flower.

27 April 2005
In the copse at the summit, a surprise Red Admiral was seen, old but not battered, and a male Green-veined White Butterfly.
Adur Butterfly and Larger Moth List 2005


16 November 2004
Copper Beech at the entrance to the Copse.

2 August 2004
Another photograph was possible of the mushroom which looked edible when it was fresh: 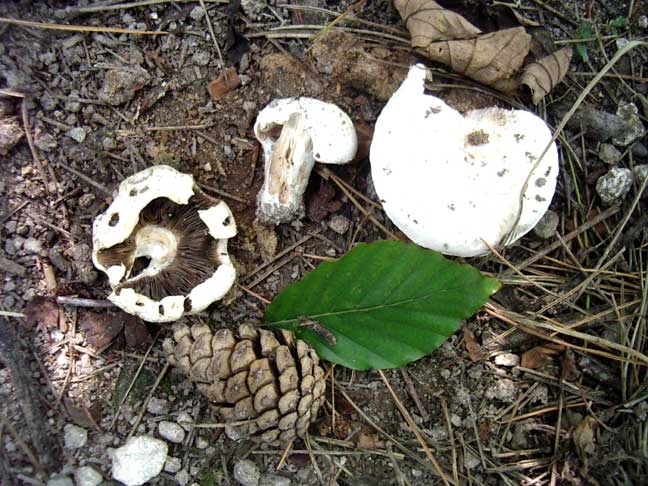 26 August 2004
The first mushroom species I have discovered on the bare earth under the canopy of broad-leaved (Italian Alder, Beech, Norway Maple) and evergreen (Corsican Pine) trees in the copse on the top of the hill, is illustrated underneath and has not yet been identified although it resembled the edible Field Mushroom in appearance, although the gills were lighter in colour (they could and are even expected to darken later).  They were inconspicuous as a white dome almost parallel with the the beginnings of the leaf litter. I have tentatively identified it a species of Agaricus. This mushroom has been confirmed as the Field Mushroom, Agaricus campestris.
Fungi of Shoreham

In the scrub in the north-west a ChiffChaff was seen in an Elderberry Bush.

24 July 2004
The offensive dog owner who lets their dog defecate right slap back in the middle of the trail and fails to clear it up is still visiting the special track on Mill Hill. This time it was clearly a Common Blue Butterfly that landed on it.

19 July 2004
A Holly Blue Butterfly in the copse had the distinction of being the first butterfly seen alighting on a dog's turd slap right in the middle of the new path as it ran through the copse. The very presence of a Holly Blue in the copse is incongruous, but there was no doubt about the identification as it landed on the turd and immediately closed its wings revealing the black dots only.
Butterfly List (Database)
Adur Butterflies

21 June - 15 July 2004
Common Poppies are growing in the cleared patches in the copse with other ruderal colonising plants.

16 February 2004
Tree felling has opened up a glade to sunlight with an area to the north cleared next to the fence adjoining the arable field, which is Erringham Hill, (see the notes for 9 February 2004).

9 February 2004
The South Downs Conservation Board conservation workers (including Andy Gattiker and Jenny) were chopping down pine trees in the copse to clear a glade and to allow native trees to grow. The new glade will be immediately behind the entrance as the new trail enters the copse (as shown in the photographs further down this page).

A very early immigrant Painted Lady Butterfly flew around the copse and settled on the Beech leaves still on the tree and landed several times on the grass.
Butterfly Report
Adur Butterflies
Adur Butterfly Flight Times

29 January 2004
A team of hard hat workers had chopped down a dozen or more Corsican Pine and Italian Alder trees to clear a glade in the northern part of the copse.

In the copse at the top of Mill Hill, the workmen had sawn down some of the pine trees and made a small fire. I think these were the Corsican Pines, Pinus nigra var. maritima. A Kestrel was very noticable as it soared around the copse. The Kestrel is usually to be found flying over the edge of the ridge waiting to swoop down on to the lower slopes.

15 December 2003
The tallest trees in the copse appear to be the Italian Alder, Alnus cordata.

With the leaves having been blown off of most of the broad-leaved trees, the photograph of the Mill Hill copse above can be contrasted with the October photograph below and compared to the March image.
Broad-leaved Trees include Norway Maple, Copper Beech, Italian Alder, Hawthorn and other trees I do not recognise.
The tall evergreens are Corsican Pines. 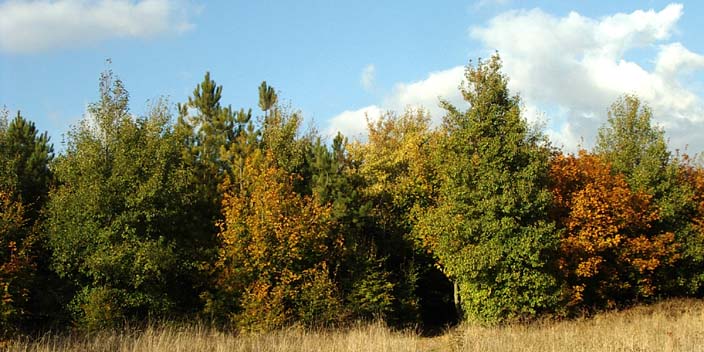 I went up the hill to capture the autumn colours of the planted copse
at the top of Mill Hill, just north of the upper car park.
A selection of three commoner leaves are illustrated above. 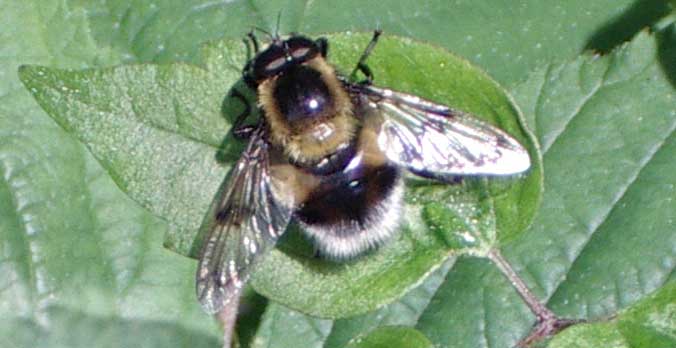 It looks like a bumblebee, but its identification does not fit the common species, and it is half the size of a queen. A queen of another bumblebee was present and this was the Three-banded White-tailed Bumblebee, Bombus hortorum.
However, the restless insect in the photograph above, discovered in the shade almost in the copse (TQ 211 075) and near a Foxglove plant at the top of Mill Hill, was the species that attracted my interest. The white tail was most distinctive. It could also halt in mid-flight in a manner typical of hoverflies and not seen in bumblebees. So it was a mimic and not quite good enough to fool me: it is the hoverfly, Volucella bombylans var. plumata. 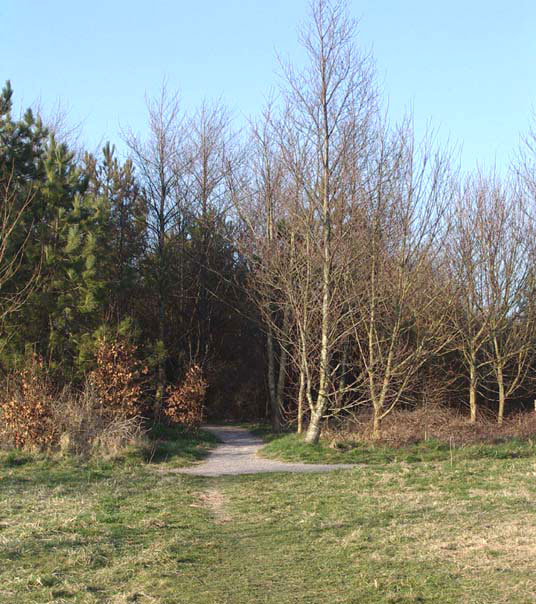