Until the 11th September 1990 I had never seen a Trigger Fish when diving, despite 20 years of regular diving in British waters, mainly in the south-west of England. On that day I was diving the wreck of the Royal Adelaide which lies in 12 metres of water about 150 metres off shore from Chesil Beach, almost in line with the visitor centre at Ferrybridge.
Research Records

I looked back on my notes from the previous dives I made at the same site from 1987 onwards, made in April and May and one in mid November 1988, but whilst in all these dives fish life had been abundant, it consisted mainly of Ballan Wrasse, Poor Cod and Pollack. 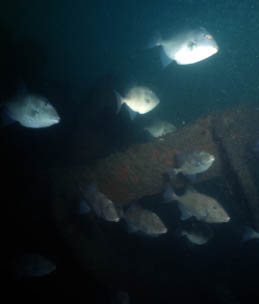 On that first dive, I noted that the wreck was covered in fishing lines, a frequent occurrence as it is well within casting distance of a beach heavily visited by anglers, and also the site of angling contests.

What really interested me was a group of 8 Trigger Fish, all about the same size, circling the wreck and only spotted near the end of the dive. The weather being fine, I dived 3 days later on the wreck of a World War II landing craft about 300 metres to the east at the same depth. There were no Trigger Fish to be seen on this new site. Two days later I dived again on the Royal Adelaide and two Trigger Fish were again seen. Anglers were catching them during our three visits.
The Wreck

The Royal Adelaide rises from a featureless cobbled sea bed to a height of about 3 to 4 metres and covers an area about the size of a tennis court. Apart from the large plates nearby there is no underwater relief so the wreck really behaves as an isolated reef.

Since that date in 1990 I have visited the Royal Adelaide nearly every year, usually in the early autumn. Dates and numbers of fish are detailed in the following list, including those reported by Alan James and Andrew Sawyer Parker published in the diving magazine SCUBAWORLD no. 54, April 1994.
Trigger Fish sightings: (AJ = Alan James reports)

Alan James reports between 50 and 60 Trigger Fish on 8 further dives to early October in 1991. The fish seem to disappear at the end of October.

The numerous reports from Autumn 1992 include much fishing line and snagged fish. In September 1993, one Trigger Fish was found to be dying with a hook in its mouth.
Behaviour

The fish always seem tame, especially as the season progresses. They frequently swim up to divers and accompany them around the wreck, often getting in the way of the photographer! The wreck is (or was) covered in mussels providing a good food source. The fish become tame because they are fed frequently by divers who crush mussels and feed the fish directly - they will feed from one's hand which is a novel experience in British waters. Other fish behaviour on the wreck has been modified in that both the Goldsinny and Ballan Wrasse have become inordinately tame and large groupings (up to 8) of Tompot Blennies can be seen.

The fish all seem to be about the same size and weight and this has not varied from year to year. 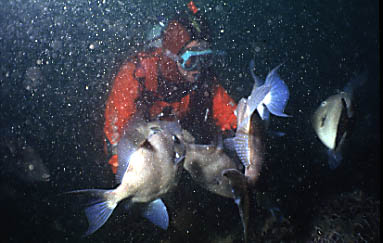 It seems that for an unknown number of years large numbers of Trigger Fish have visited the wreck of the Royal Adelaide between August and October. The numbers dwindle during their stay, probably due to depredations made by anglers.

A number of questions arise. Why this site? How long have they been doing this? Where do they come from and go to? Do they breed in British waters?

A partial answer to the first question may be the presence of Portland Bill which juts out into the English Channel and is thought to be a cut-off point for some species. The Royal Adelaide is the largest underwater structure for many miles (the nearest reefs at a comparable depth are those half a mile offshore from West Bay). Hence the Royal Adelaide may be acting as a focal point in this area, whereas further west the population is scattered along the shoreline where there are many shallow offshore reefs, making it less likely that on any single dive one will see any Trigger Fish at all. Interestingly, a mile east of the Royal Adelaide is Chesil Cove, itself noted for being a site where unusual species can be seen. 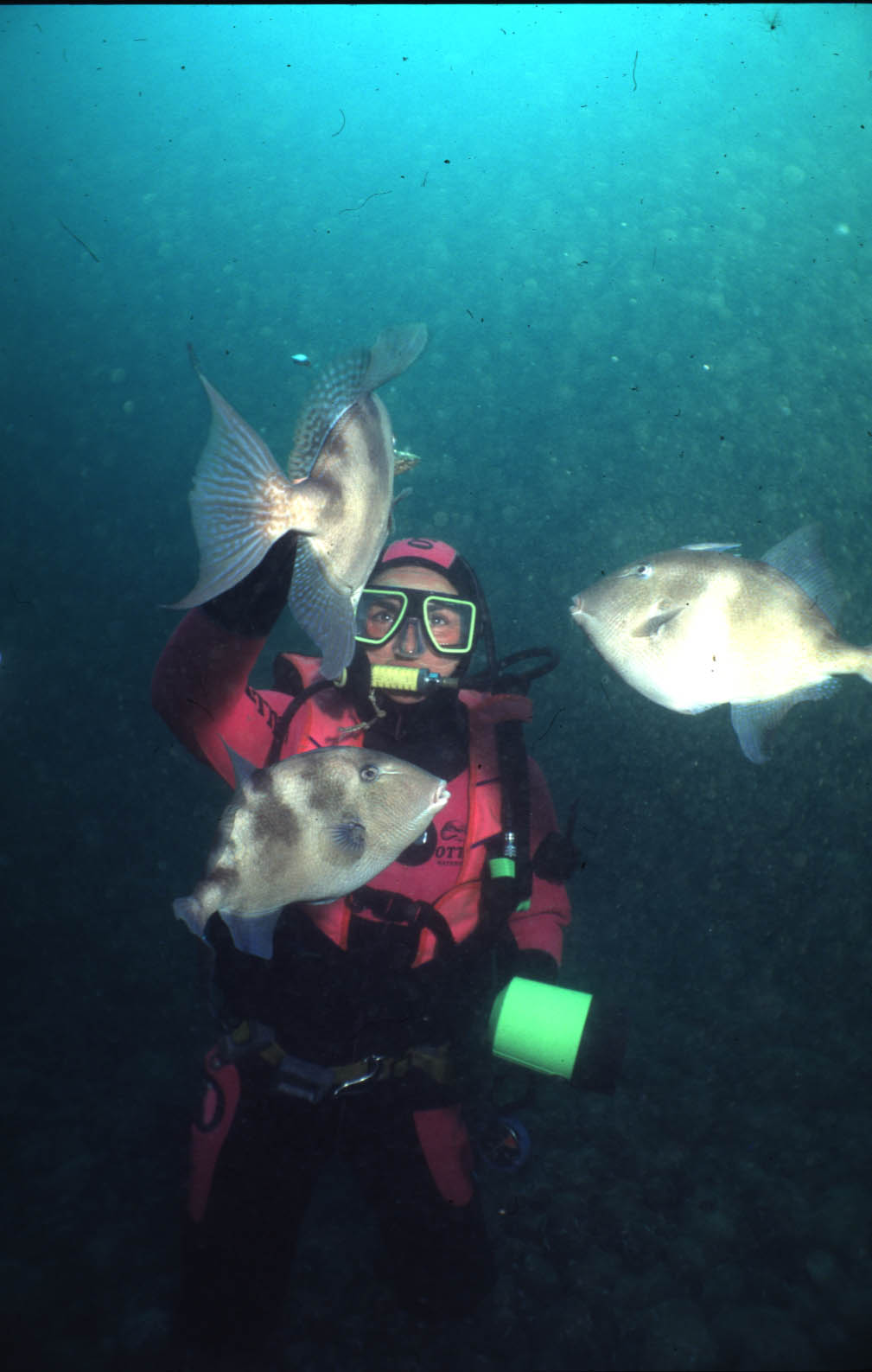 For how many years?

The second question can only be answered circumstantially. Diving magazines have been published for 30 years, but this phenomenon has not been reported until the last 5 years. The dive shop at Portland (Parry's) has been running for 30 years and, again, Trigger Fish only seem to have been on the 'agenda' recently. Angling records, which I have not researched, might be another source to investigate.
Migration

I am very interested in what happens to these fish and the logical next step would be to tag them. I have made tentative enquiries via Neil Garrick of Fishy Business in Exeter and look forward to hearing whether such a project would be feasible.

I have come up with a hypothesis which tagging might prove. I suggest that fish found on the Royal Adelaide move up the English Channel west to east during the summer months with their final 'port of call' being Portland. During the seasonal migration many will linger at reefs all along the western Channel coast. A tagged population from the Royal Adelaide (providing that not all of them are captured immediately by anglers) should appear in subsequent years distributed all along the English Channel coast.

How Readers Can Help

Personal observations of Trigger Fish anywhere in British waters are wanted from readers. Of special interest are captures in early spring from the south-west and records of captures in Weymouth Bay and east of Portland Bill. Please include as much information as possible including the date caught and method of capture, or divers' observations.

23 September 2001
Dived off Chesil Beach on the wreck of the Royal Adelaide today.
Anglers were catching trigger fish off the beach.  The usual weight is 1½ lb one said. They reckon they usually catch them until the end of the month.

On the wreck visibility was poor due to the presence of a dive boat with a powerful airlift and a diver excavating the cobbles in the hopes of finding something of value.  Something like 30 trigger fish were swimming around the wreck unperturbed by the airlift and often coming up to us for a close look.
Many bore scars around their heads.  There seemed to be some younger specimens this year.  I expect to find them returning in large numbers next year - the wreck is covered in mussel spat.

The Trigger Fish, Balistes carolinensis, is the only member of the family Balistidae that has been recorded in British seas. The fish breeds in much warmer waters where it is a common fish. Only during the summer months do adult fishes venture into the English Channel and up the west coast of Britain. Off the Cornish coast they are now found nearly every year, but in the seas off Sussex they are recorded about once a decade.

There are no records of breeding in British seas, or larvae found in the plankton. It is reckoned that the fish drift in with the ocean currents. The young fish live amongst Sargassum weed in the Atlantic Ocean.

All trigger fishes are characterised by an unusual dorsal fin arrangement. The first dorsal spine is very strong and is so arranged that it is connected in function with the second spine. The fish wedges itself into a crevice for safety and secures itself there by erecting the strong first spine and locking it into position with the second. When the second spine is depressed it acts as a trigger to unlock the first spine.

The jaw of the Trigger Fish contains eight strong incisor teeth which it uses to chisel holes in mussels and other hard shelled molluscs to get at the soft flesh inside (see 06.01.13). It can also attack and eat crabs.

The Triggerfish can attain a length of 40 cm. The reason for the hard bony plates on the side of the fish behind the gill cover is not known to the writer of this summary.

This fish is common in the Mediterranean Sea, Atlantic Ocean and the Caribbean Sea.

The fish fares well in Public Aquaria, where it can be seen in most British establishments.

26 November 2001
Diving on the Royal Adelaide with two friends, I discovered that 30+ Triggerfish were still there.

Report by Mike Foster
Summer 2002
I saw no Triggerfish when diving the Royal Adelaide a few weeks ago (September 2002) which is the first time I haven't seen any for years.  One or two have been seen but not in the numbers previously seen.
Peter Glanvill
Absence in Summer 2002


10 August 2003
Only five Triggerfish, Balistes capriscus,  on the Adelaide yesterday but one looks suspiciously like one I have seen in previous years - it has a very prominent scar on its forehead. If have decent photo will attempt comparison.